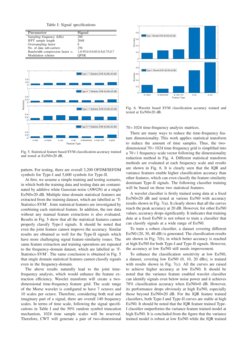 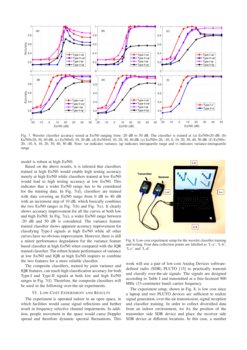 An intelligent receiver can automatically identify signal formats based on data training. Deep learning (DL) is initially proposed to deal with image processing since it can automatically and efficiently extract features from two-dimensional images. The representative deep learning strategy is convolutional neural network (CNN

The main contributions of this work are as the following.

The time-domain SEFDM signals are illustrated in Fig. 1 where two types of signal patterns are presented. It is inferred that the classification of Type-I signal pattern is easier than that of Type-II signal pattern since the signal features in Type-I are more distinguishable.

where the expression is very similar to that of OFDM except the bandwidth compression factor α=Δf⋅T, in which Δf is the sub-carrier spacing and T is the time period of one SEFDM symbol. The signal spectral bandwidth in (1) is compressed when α<1 and is equivalent to that of OFDM when α=1. The number of sub-carriers is determined by N. sn is the nth single-carrier symbol within one SEFDM symbol and Xk is the kth time sample with k=0,1,...,N−1. The instantaneous power for one SEFDM symbol is computed in the following

It is clearly shown that the inter carrier interference (ICI) term in (2), which is related to the value of α, determines the possibility of identifying different SEFDM signals. It is inferred that when SEFDM signals have similar values of α, the ICI term will become similar and would complicate signal classification.

A multi-layer CNN classifier is trained in a recent work [tongyang_VTC2020_DL_classification] to automatically extract signal features in either time-domain or frequency-domain. Based on extracted features, classification results are compared in Fig. 2, in which the time-domain classifier achieves higher accuracy than its frequency-domain counterpart. Classification accuracy can reach 95% when considering limited number of non-orthogonal signals in Type-I. However, the accuracy drops greatly when adding more similar signals in Type-II.

The limitation of the previous work [tongyang_VTC2020_DL_classification] is obvious and the motivation for this work is to accurately classify Type-II signals. The training of a multi-layer CNN classifier is time-consuming since it requires extensive hyperparameter tuning and iterative back propagation optimization. Therefore, it would be more efficient to use traditional machine learning strategies with manual feature extractions. The SVM classifier, based on domain-knowledge dependent features, is applied in this work. Firstly, the training is fast since features are obtained in advance rather than time-consuming data training. Secondly, the methodology of machine learning is deterministic and its working principle can be well explained. Since there are multiple signal classes in Type-I and Type-II, therefore a multiclass error-correcting output codes (ECOC) model [ECOC_Dietterich_1995] is applied here. A one-versus-one [ECOC_2014_codingDesign] coding strategy is implemented for separating different classes, which simplifies the multiclass classification task into multiple binary class classification tasks. Thus, multiple binary SVM learners, with a polynomial kernel of order two, are used for the multiclass classification.

This section will firstly explore the impacts of different one-dimensional statistical features and their combinations either in time-domain or frequency-domain. The second part will investigate the impact of two-dimensional time-frequency features via the single-level wavelet transform.

The commonly used statistical feature is arithmetic mean, which computes the average value of a dataset. Variance is used to measure the variations of a dataset. Small variance indicates that the values of dataset elements are closer to the arithmetic mean while large variance indicates that the dataset elements are spread out away from the mean. Skewness

[Feature_skewness_2011] is a way to measure data distribution characteristics. Negative skewness indicates that a dataset distributes more data to the left side relative to its mean; positive skewness indicates that data is more distributed to the right side of the mean. The ratio between the maximum value and the minimum value is also studied here and the MaxMin ratio can tell the fluctuations of a dataset. Interquartile range (IQR) [book_IQR_1996] is a way to measure data dispersion, which equals the difference between the 25th percentile and the 75th percentile.

There are several wavelet candidates for wavelet transform. This work employs the widely used Morse wavelet and the effects of different wavelets are not taken into account. The CWT time-frequency analysis for OFDM and SEFDM signals using Morse wavelet is illustrated in Fig. 3

. It is clearly shown that with the reduction of alpha, the frequency scales for SEFDM shrink to show the effect of bandwidth compression while its time scales are stretched to show the time-domain sample characteristics. Typical artificial intelligent solutions are to feed the time-frequency grid as an image to a deep learning neural network such as

CNN. However, this would cause extra training complexity since the optimal neural network hyperparameters have to be tuned based on iterative attempts. Therefore, pre-processing is required to simplify the two-dimensional time-frequency feature representation into a one-dimensional feature vector as illustrated in Fig. 4. The strategy is to maintain the fine frequency scales of CWT while reducing time samples dimensionality using the statistical knowledge explained in Section IV-A.

To have a realistic training scenario, channel/hardware impairments have to be considered. The wireless channel power delay profile (PDP) and hardware impairments are defined in [tongyang_VTC2020_DL_classification] and are reused in this work. Signals are generated according to Table LABEL:tab:table_signal_specifications where 2048 time samples are produced at the transmitter for each OFDM/SEFDM symbol. There is no synchronization mechanism between the transmitter and the receiver. Therefore, the receiver would capture 2048 time samples and randomly truncate 1024 samples for training. At the training stage, 2,000 OFDM/SEFDM symbols are generated for each class (i.e. each α) following the data augmentation principle in [tongyang_VTC2020_DL_classification]. In this case, there are overall 8,000 symbols for the Type-I signal pattern and 14,000 symbols for the Type-II signal pattern. For testing, there are overall 3,200 OFDM/SEFDM symbols for Type-I and 5,600 symbols for Type-II.

At first, we assume a simple training and testing scenario, in which both the training data and testing data are contaminated by additive white Gaussian noise (AWGN) at a single Es/N0=20 dB. Multiple time-domain statistical features are extracted from the training dataset, which are labelled as ‘T-Statistics-SVM’. Joint statistical features are investigated by combining each statistical feature. In addition, the raw data without any manual feature extractions is also evaluated. Results in Fig. 5 show that all the statistical features cannot properly classify Type-I signals. It should be noted that even the joint feature cannot improve the accuracy. Similar results are obtained as well for the Type-II signals which have more challenging signal feature-similarity issues. The same feature extraction and training operations are repeated to the frequency-domain dataset, which are labelled as ‘F-Statistics-SVM’. The same conclusion is obtained in Fig. 5 that single domain statistical features cannot classify signals even in the frequency-domain.

The above results naturally lead to the joint time-frequency analysis, which would enhance the feature extraction efficiency. Wavelet transform will create a two-dimensional time-frequency feature grid. The scale range of the Morse wavelet is configured to have 7 octaves and 10 scales per octave. Therefore, considering both real and imaginary part of a signal, there are overall 140 frequency scales. In terms of time scale, following the signal specifications in Table LABEL:tab:table_signal_specifications and the 50% random symbol truncation mechanism, 1024 time sample scales will be reserved. Therefore, CWT will generate a pair of two-dimensional 70×1024 time-frequency analysis matrices.

There are many ways to reduce the time-frequency feature dimensionality. This work applies statistical transform to reduce the amount of time samples. Thus, the two-dimensional 70×1024 time-frequency grid is simplified into a 70×1 frequency-scale vector following the dimensionality reduction method in Fig. 4. Different statistical transform methods are evaluated at each frequency scale and results are shown in Fig. 6. It is clearly seen that the IQR and variance features enable higher classification accuracy than other features, which can even classify the feature-similarity dominant Type-II signals. The following classifier training will be based on those two statistical features.

A wavelet classifier is firstly trained using data at a fixed Es/N0=20 dB and tested at various Es/N0 with accuracy results shown in Fig. 7(a). It clearly shows that all the curves reach the peak accuracy at 20 dB. However, for other Es/N0 values, accuracy drops significantly. It indicates that training data at a fixed Es/N0 is not robust to train a classifier that can classify signals at a wide range of Es/N0.

To train a robust classifier, a dataset covering different Es/N0 (20, 30, 40 dB) is generated. The classification results are shown in Fig. 7(b), in which better accuracy is reached at high Es/N0 for both Type-I and Type-II signals. However, the accuracy at low Es/N0 still needs improvement.

The experiment is operated indoor in an open space, in which facilities would cause signal reflections and further result in frequency selective channel impairments. In addition, people movement in the space would cause Doppler spread and therefore dynamic spectral fluctuations. This work will use a pair of low-cost Analog Devices software-defined radio (SDR) PLUTO [PlutoSDR] to practically transmit and classify over-the-air signals. The signals are designed according to Table LABEL:tab:table_signal_specifications and transmitted at a free-licensed 900 MHz (33-centimeter band) carrier frequency.

The experiment setup, shown in Fig. 8, is low cost since a laptop and two PLUTO devices are sufficient to realize signal generation, over-the-air transmission, signal reception and classifier training. In order to collect diversified data from an indoor environment, we fix the position of the transmitter side SDR device and place the receiver side SDR device at different locations. In this case, a number of training datasets, impaired by channel multipath fading, power degradation and Doppler effect, are collected. Unlike the CNN classifier where a large number of training symbols are required for feature extractions, the wavelet classifier can manually extract features based on a limited dataset. Therefore, in this experiment, at each location, 400 symbols are collected for the Type-I signal pattern and 700 symbols for the Type-II signal pattern. There are four data collections considering four different locations of the receiver. Therefore, the overall collected training symbols for Type-I and Type-II are 1,600 and 2,800, respectively. For testing, the same process is repeated with four data collections. To have a fair comparison with the previous work [tongyang_VTC2020_DL_classification], the number of testing symbols per class is fixed at 800.

The collected data will be used to train wavelet classifiers off-line using Matlab. Once a wavelet classifier is trained, the model will be saved. Therefore, SDR devices will reuse the saved model for online signal classification and there is no need to re-train classifiers. Thus, the off-line training is a one-time operation. The confusion matrices are presented in Fig. 9. The classification accuracy for the Type-I signal pattern is nearly 100%. For Type-II signals, the accuracy is 90%, which is much higher than the 70.75% in [tongyang_VTC2020_DL_classification]

where a transfer learning enabled