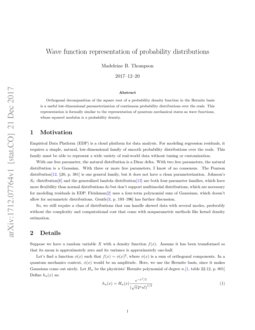 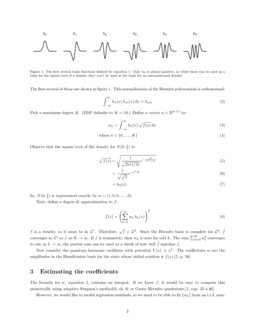 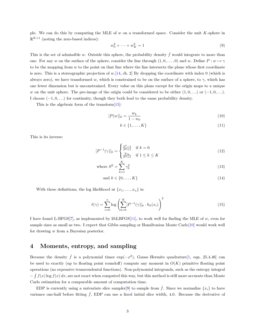 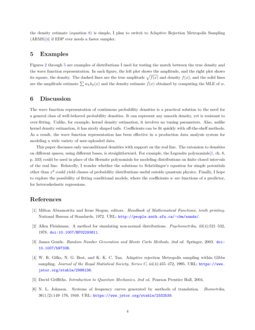 Empirical Data Platform (EDP) is a cloud platform for data analysis. For modeling regression residuals, it requires a simple, natural, low-dimensional family of smooth probability distributions over the reals. This family must be able to represent a wide variety of real-world data without tuning or customization.

are both four-parameter families, which have more flexibility than normal distributions do but don’t support multimodal distributions, which are necessary for modeling residuals in EDP. Fleishman

So, we still require a class of distributions that can handle skewed data with several modes, preferably without the complexity and computational cost that come with nonparametric methods like kernel density estimation.

Suppose we have a random variable

X with a density function f(x)

Let’s find a function ϕ(x) such that f(x)=ϕ(x)2, where ϕ(x) is a sum of orthogonal components. In a quantum mechanics context, ϕ(x) would be an amplitude. Here, we use the Hermite basis, since it makes Gaussians come out nicely. Let Hn be the physicists’ Hermite polynomial of degree n.[1, table 22.12, p. 801] Define hn(x) as:

The first several of these are shown in figure 1. This normalization of the Hermite polynomials is orthonormal:

Observe that the square root of the density for N(0,12) is:

Next, define a degree-K approximation to f:

is zero for odd

k. The sum ∑Kk=0w2k converges to one as k→∞; the partial sum can be used as a check of how well ^f matches f.

Now consider the quantum harmonic oscillator with potential V(x)∝x2. The coefficients w are the amplitudes in the Hamiltonian basis for the state whose initial position is f(x).[5, p. 56]

The formula for w, equation 3, contains an integral. If we knew f, it would be easy to compute this numerically using adaptive Simpson’s method[8, ch. 6] or Gauss–Hermite quadrature.[1, eqn. 25.4.46].

However, we would like to model regression residuals, so we need to be able to fit {wk} from an i.i.d. sample. We can do this by computing the MLE of w on a transformed space. Consider the unit K-sphere in RK+1 (noting the zero-based indices):

This is the set of admissible w. Outside this sphere, the probability density ^f would integrate to more than one. For any w on the surface of the sphere, consider the line through (1,0,…,0) and w. Define P:w↦γ to be the mapping from w to the point on that line where the line intersects the plane whose first coordinate is zero. This is a stereographic projection of w.[14, ch. 2] By dropping the coordinate with index 0 (which is always zero), we have transformed w, which is constrained to be on the surface of a sphere, to γ, which has one fewer dimension but is unconstrained. Every value on this plane except for the origin maps to a unique w on the unit sphere. The pre-image of the origin could be considered to be either (1,0,…) or (−1,0,…). I choose (−1,0,…) for continuity, though they both lead to the same probability density.

This is the algebraic form of the transform[16]:

This is its inverse:

With these definitions, the log likelihood at {x1,…,xn} is:

I have found L-BFGS[7], as implemented by libLBFGS[11], to work well for finding the MLE of w, even for sample sizes as small as two. I expect that Gibbs sampling or Hamiltonian Monte Carlo[10] would work well for drawing w from a Bayesian posterior.

O(K) primitive floating point operations (no expensive transcendental functions). Non-polynomial integrands, such as the entropy integral −∫f(x)logf(x)dx, are not exact when computed this way, but this method is still more accurate than Monte Carlo estimation for a comparable amount of computation time.

EDP is currently using a univariate slice sampler[9] to sample from ^f. Since we normalize {xi} to have variance one-half before fitting ^f, EDP can use a fixed initial slice width, 4.0. Because the derivative of the density estimate (equation 8) is simple, I plan to switch to Adaptive Rejection Metropolis Sampling (ARMS)[4] if EDP ever needs a faster sampler.

Figures 2 through 5 are examples of distributions I used for testing the match between the true density and the wave function representation. In each figure, the left plot shows the amplitude, and the right plot shows its square, the density. The dashed lines are the true amplitude √f(x) and density f(x), and the solid lines are the amplitude estimate ∑wkhk(x) and the density estimate ^f(x) obtained by computing the MLE of w.

The wave function representation of continuous probability densities is a practical solution to the need for a general class of well-behaved probability densities. It can represent any smooth density, yet is resistant to over-fitting. Unlike, for example, kernel density estimation, it involves no tuning parameters. Also, unlike kernel density estimation, it has nicely shaped tails. Coefficients can be fit quickly with off-the-shelf methods. As a result, the wave function representation has been effective in a production data analysis system for modeling a wide variety of user-uploaded data.

This paper discusses only unconditional densities with support on the real line. The extension to densities on different spaces, using different bases, is straightforward. For example, the Legendre polynomials[1, ch. 8, p. 333] could be used in place of the Hermite polynomials for modeling distributions on finite closed intervals of the real line. Relatedly, I wonder whether the solutions to Schrödinger’s equation for simple potentials other than x2 could yield classes of probability distributions useful outside quantum physics. Finally, I hope to explore the possibility of fitting conditional models, where the coefficients w are functions of a predictor, for heteroskedastic regressions.

R code for fitting wave functions to distributions is available in the “wavefunction” package on CRAN.[15]