Hybridisation of the multi-objective optimisation algorithm NSGA-II and local search is proposed for water distribution system design. Results obtained with the proposed algorithm are presented for four medium-size water networks taken from the literature. Local search is found to be beneficial for one of the networks in terms of finding new solutions not reported earlier. It is also shown that simply using an external archive to save all non-dominated solutions visited by the population, even without local search, leads to substantial improvement in the non-dominated set produced by the algorithm. 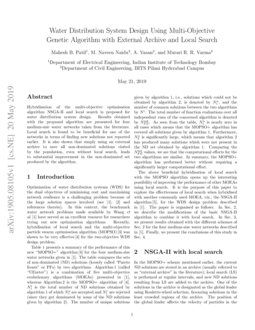 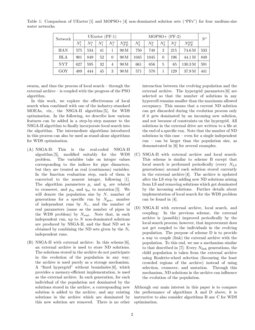 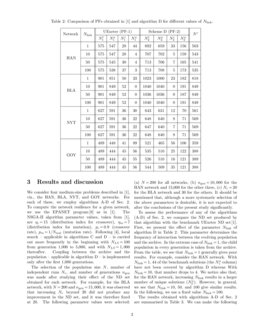 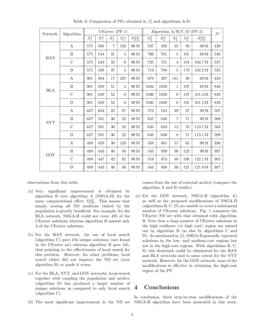 Optimisation of water distribution systems (WDS) for the dual objectives of minimising cost and maximising network resilience is a challenging problem because of the large solution spaces involved (see [8], [4] and references therein). In this context, the benchmark water network problems made available by Wang et al. [8] have served as an excellent resource for researchers trying out new optimisation algorithms. Recently, hybridisation of local search and the multi-objective particle swarm optimisation algorithm (MOPSO) [2] was shown to be very effective [5] for the two-objective WDS design problem.

The above beneficial hybridisation of local search with the MOPSO algorithm opens up the interesting possibility of improving the performance of other MOEAs using local search. It is the purpose of this paper to explore the effectiveness of local search when hybridised with another commonly used MOEA, viz., the NSGA-II algorithm [3], for the WDS design problem described in [8]. The paper is organised as follows. In Sec. 2, we describe the modifications of the basic NSGA-II algorithm to combine it with local search. In Sec. 3, we present results obtained with the different schemes of Sec. 2 for the four medium-size water networks described in [8]. Finally, we present the conclusions of this study in Sec. 4.

In the MOPSO+ scheme mentioned earlier, the current ND solutions are stored in an archive (usually referred to as “external archive” in the literature); local search (LS) is performed at regular intervals, and new ND solutions resulting from LS are added to the archive. One of the solutions in the archive is designated as the global leader using Roulette-wheel selection, favouring solutions in the least crowded regions of the archive. The position of the global leader affects the velocity of particles in the swarm, and thus the process of local search – through the external archive – is coupled with the progress of the PSO algorithm.

In this work, we explore the effectiveness of local search when combined with one of the industry-standard MOEAs, viz., the NSGA-II algorithm [3], for WDS optimisation. In the following, we describe how various features can be added in a step-by-step manner to the NSGA-II algorithm to finally incorporate local search into the algorithm. The intermediate algorithms introduced in this process can also be used as stand-alone algorithms for WDS optimisation.

Although our main interest in this paper is to compare the performance of algorithms A and D above, it is instructive to also consider algorithms B anc C for WDS optimisation.

We consider four medium-size problems described in [8], viz., the HAN, BLA, NYT, and GOY networks. For each of these, we employ algorithms A-D of Sec. 2. To compute the network resilience for a given network, we use the EPANET program [7] as in [8]. The NSGA-II algorithm parameter values, taken from [8], are ηc=15 (distribution index for crossover), ηm=7 (distribution index for mutation), pc=0.9 (crossover rate), pm=1/Nreal (mutation rate). Following [5], local search – applicable in algorithms C and D – is carried out more frequently in the beginning with NLS=100 from generation 1,000 to 5,000, and with NLS=1,000 thereafter. Coupling between the archive and the population – applicable in algorithm D – is implemented only after the first 1,000 generations.

The selection of the population size N, number of independent runs Nr, and number of generations ngen was made after studying their effect of the ND set obtained for each network. For example, for the BLA network, with N=200 and ngen=15,000, it was observed that increasing Nr beyond 20 did not produce any improvement in the ND set, and it was therefore fixed at 20. The following parameter values were selected: (a) N=200 for all networks, (b) ngen=10,000 for the HAN network and 15,000 for the other three, (c) Nr=20 for the BLA network and 30 for the others. It should be mentioned that, although a more systematic selection of the above parameters is desirable, it is not expected to alter the conclusions of the present study significantly.

To assess the performance of any of the algorithms (A-D) of Sec. 2, we compare the ND set produced by that algorithm with the benchmark UExeter ND set [8]. First, we present the effect of the parameter Nlink of algorithm D in Table 2. This parameter determines the frequency of interaction between the evolving population and the archive. In the extreme case of Nlink=1, the child population in every generation is taken from the archive. From the table, we see that Nlink=1 generally gives poor results. For example, consider the HAN network. With Nlink=1, 44 of the benchmark solutions (the Nu1 column) have not been covered by algorithm D whereas With Nlink=10, that number drops to 4. We notice also that, for the HAN network, increasing Nlink results in a larger number of unique solutions (Nu2). However, in general, we see that Nlink=10, 50, and 100 give similar results. In the following, we use a fixed value Nlink=100.

The results obtained with algorithms A-D of Sec. 2 are summarised in Table 3. We can make the following observations from this table.

In conclusion, three step-by-step modifications of the NSGA-II algorithm have been presented in this work. The new algorithms have been used for the medium-size water network problem described in [8]. For three of the four problems, the proposed algorithms have given substantial improvement over the best-known Pareto fronts (ND sets) available in the literature. It was found that the most significant contribution in this improvement arises from the use of an external archive to store all ND positions visited by the population.

Compared to the recently proposed MOPSO+ algorithm [5], the algorithms presented in this work are found to be less effective for the two-objective WSD optimisation problem of [8] (see Tables 1 and 3). A mechanism other than that described in this paper for coupling the archive and the evolving population needs to be explored for improved performance.