The survey presents the well-known Warshall's algorithm, a generalization and some interesting applications of this. 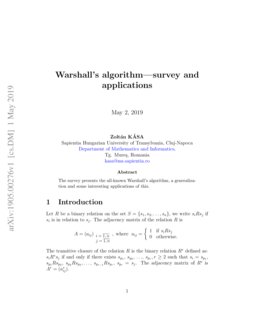 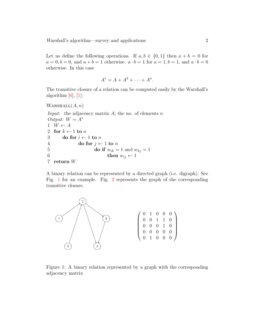 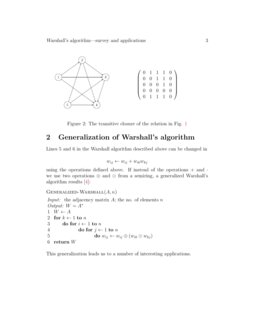 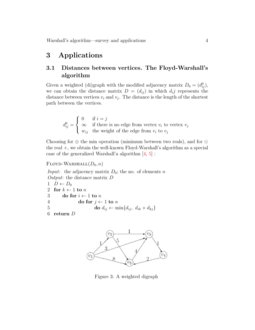 Let R be a binary relation on the set S={s1,s2,…,sn}, we write siRsj if si is in relation to sj. The adjacency matrix of the relation R is

The transitive closure of the relation R is the binary relation R∗ defined as:

The transitive closure of a relation can be computed easily by the Warshall’s algorithm [6], [1]:

A binary relation can be represented by a directed graph (i.e. digraph). See Fig. 1 for an example. Fig. 2 represents the graph of the corresponding transitive closure.

This generalization leads us to a number of interesting applications.

3.1 Distances between vertices. The Floyd-Warshall’s algorithm

Given a weighted (di)graph with the modified adjacency matrix D0=(d0ij), we can obtain the distance matrix D=(dij) in which dij represents the distance between vertices vi and vj. The distance is the length of the shortest path between the vertices.

Choosing for ⊕ the min operation (minimum between two reals), and for ⊙ the real +, we obtain the well-known Floyd-Warshall’s algorithm as a special case of the generalized Warshall’a algorithm [4, 5] :

Figures 3 and 4 contain az example. The shortest paths can be easily obtained if in the description of the algorithm in line 5 we store also the previous vertex vk on the path. In the case of acyclic digraph, the algorithm can be easily modified to obtain the longest distances between vertices, and consequently the longest paths.

3.2 Number of paths in acyclic digraphs

Here by path we understand directed path. In an acyclic digraph the following algorithm count the number of paths between vertices [3, 2]. The operation ⊕,⊙ are the classical add and multiply operations for real numbers.

3.3 All paths in digraphs

The Warshall algorithm combined with the Latin square method can be used to obtain all paths in a (not necessarily acyclic) digraph [3]. A path will be denoted by a string formed by its vertices in there natural order.

Let us consider a matrix A with the elements Aij which are set of strings. Initially elements of this matrix are defined as:

Operations are: the set union and set product defined as before.

Starting with the matrix A defined as before, the algorithm to obtain all paths is the following:

In Figures 7 and 8 an example is given. For example between vertices v1 and v3 there are two paths: v1v3 and v1v2v3.

The application mentioned here can be found in [3]. Let Σ be an alphabet, Σn the set of all n-length words over Σ, Σ∗ the set of all finite word over Σ.

The number of M-subwords of a word u for a given set M is the scattered subword complexity, simply M-complexity.

Words with different letters are called rainbow words. The M-complexity of a length-n rainbow word does not depend on what letters it contains, and is denoted by K(n,M).

To compute the M-complexity of a rainbow word of length n we will use graph theoretical results. Let us consider the rainbow word a1a2…an and the corresponding digraph G=(V,E), with

Because the graph has no directed cycles, the element in row i and column j in Ak (where Ak=Ak−1A, with A1=A) will represent the number of length-k directed paths from ai to aj. If I

is the identity matrix (with elements equal to 1 only on the first diagonal, and 0 otherwise), let us define the matrix

The M-complexity of a rainbow word is then

Matrix R can be better computed using the Warshall-Path algorithm.

From W we obtain easily R=I+W.

For example let us consider the graph in Fig. 9. The corresponding adjacency matrix is:

After applying the Warshall-Path algorithm:

Using the Warshall-Latin algorithm we can obtain all nontrivial (with length at least 2) M-subwords of a given length-n rainbow word a1a2⋯an. Let us consider a matrix A with the elements Aij which are set of strings. Initially this matrix is defined as:

The result of the algorithm in this case is:

Let us consider a finite automaton A=(Q,Σ,δ,{q0},F), where Q is a finite set of states, Σ the input alphabet, δ:Q×Σ→Q the transition function, q0 the initial state, F the set of finale states. In following we do not need to mark the initial and the finite states.

The transition function can be generalized for words too: δ(q,wa)=δ(δ(q,w),a), where q∈Q,a∈Σ,w∈Σ∗.

We are interesting in finding for each pair p,q of states the letters a for which there exists a natural k≥1 such that we have the transition δ(p,ak)=q [4], i.e.:

Instead of ⊕ we use here set union (∪) and instead of ⊙ set intersection (∩).

The transition table of the finite automaton in Fig. 10 is:

Matrices for graph in Fig. 10 are the following: