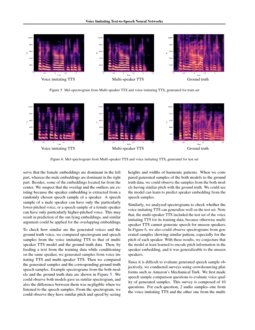 We implemented a baseline multi-speaker TTS model based on Tacotron, and we also implemented voice imitating TTS model by extending the baseline model. We investigated latent space of the learned speaker embeddings by visualizing with principal component analysis (PCA). We directly qualitatively compared similarity of voice from the both TTS models and the ground truth data. We further conducted two types of surveys to analyze the result quantitatively. The first survey compared generation quality of the voice imitating TTS and the multi-speaker TTS. The second survey checked how speaker-discriminable speech samples are generated by the both models.

The main contributions of this study can be summarized as follows:

Common TTS systems are composed of two major parts: (1) text encoding part and (2) speech generation part. Using prior knowledge about the target language, domain experts have defined useful features of the target language and have extracted them from input texts. This process is called a text encoding part, and many natural language processing techniques have been used in this stage. For example, a grapheme-to-phoneme model is applied to input texts to obtain phoneme sequences, and a part-of-speech tagger is applied to obtain syntactic information. In this manner, the text encoding part takes a text input and returns various linguistic features. Then, the following speech generation part takes the linguistic features and generates waveform of the speech. Examples of the speech generation part include concatenative and parametric approach. The concatenative approach generates speech by connecting short units of speech which has a scale of phoneme or sub-phoneme level, and the parametric TTS utilizes a generative model to generate speech.

(Lee et al., 2017). This approach is similar to the multi-speaker Tacotron in Deep Voice 2 paper, but the model could be built with less number of speaker embedding input connections.

Multi-speaker TTS model is further extended to voice imitation model. Current multi-speaker TTS models takes a one-hot represented speaker index vector as an input, and this is not easily extendable to generate voices which are not in the training data. Because the model can learn embeddings only for the speakers represented by one-hot vectors, there is no way to get a new speaker’s embedding. If we want to generate speech of a new speaker, we need to retrain the whole TTS model or fine-tune the embedding layer of the TTS model. However, training of the network requires large amount of annotated speech data, and it takes time to train the network until convergence. Taigman et al. proposed a model that can mimic a new speaker’s voice (2018)

. While freezing the model’s parameters, they backpropagated errors using new speaker’s (speech, text, speaker index) pairs to get a learned embedding. However, this model could not overcome the problems we mentioned earlier. The retraining step requires (speech, text) pair which can be inaccurate or even unavailable for data from the wild. Furthermore, because of the additional training, voice imitation cannot be done immediately. In this study, we will propose a TTS model that does not require annotated (speech, text) pairs so that it can be utilized in more general situations. Moreover, our model can immediately mimic a new speaker’s voice without retraining.

One advantage to use neural network for a TTS model is that it is easy to give conditions when generating speech. For instance, we can give condition by just adding a speaker index input. Among several approaches to neural network based multi-speaker TTS models, we decided to adopt the architecture of Lee et al. (2017). Their model extends Tacotron to take a speaker embedding vector at the decoder of Tacotron (see Figure 1). If we drop the connections from the one-hot speaker ID input and the speaker embedding vector s, there is no difference from the original Tacotron architecture. The model has two targets in its objective function: (1) Mel-scale spectrogram target Ymel and (2) linear-scale spectrogram target Ylinear. L1 distances of each Mel-scale spectrograms ^Ymel and Ymel and linear-scale spectrograms ^Ylinear and Ylinear are added to compute the objective function as follows:

learned by backpropagated error from the loss function (

1). By its formulation, the model can store only the speaker embeddings appeared in the training data at the Lookup table. When we want to generate a speech with a new speaker’s voice, we need another speaker embedding for that speaker. In order to get a speaker embedding of the unseen speakers, we should train the model again with the new speaker’s data. This retraining process consumes much time, and the model’s usability limited to the voice with large data size.

Prediction of the speaker embedding vector requires only one forward pass of the speaker embedder network. This enables immediate imitation of the proposed model to generate speech for a new speaker. Although the input spectrograms may have various lengths, the max-over-time pooling layer, which is located at the end of the convolutional layers, squeezes the input into a fixed dimensional vector with length 1 for time axis. In this way, the voice imitating TTS model can deal with input spectrograms with arbitrary lengths. The speaker embedder with input speech sample replaces the Lookup table with one-hot speaker ID input of the multi-speaker Tacotron as described in Figure 3. For training of the voice imitating TTS model, we also use the same objective function (1) with the multi-speaker TTS. Note also that, there is no supervision on training the speaker embedding vector.

We preprocessed the raw dataset in several ways. At first, we manually annotated transcripts for audio files which did not have corresponding transcripts. Then, for the text data, we filtered out symbols if they are not English letters or numbers or punctuation marks. We used capital letters without decapitalization. For the audio data, we trimmed silence using WebRTC Voice Activity Detector (Google, ). Reportedly, trimming silence is important for training Tacotron (Arık et al., 2017b; Wang et al., 2017). Note that, there is no label which tells the model when to start speech. If there is silence in the beginning of audio file, the model cannot learn what is the proper time to start speech. Removing silence can alleviate this problem by aligning the starting times of speeches. After the trimming, the total length of the dataset became 29.97 hours. Then, we calculated log-Mel-spectrogram and log-linear-spectrogram of each audio file. When generating spectrogram, we used Hann window of frame length 50ms and shifted windows by 12.5ms.

In this experiment, we trained two TTS models: multi-speaker Tacotron and voice imitating Tacotron. In the rest of this paper, we will use terms multi-speaker TTS and voice imitating TTS to refer the two models respectively. To train the latter model, we did additional data preparation process. We prepared speech samples of each speaker since the model needs to predict a speaker embedding from log-Mel-spectrogram of a speech sample. Since we thought it is hard to capture a speaker’s characteristic in a short sentence, we concatenated one speaker’s whole speech data and made samples by applying fixed size rectangular window with overlap. The resulting window covers around 6 seconds of speech, which can contain several sentences. We fed a speech sample a target speaker to the model together with text input, while randomly drawing the speech sample from the windowed sample pool. We did not used the speech sample that is matched to the text input to prevent model from learning to generate by coping from the input speech sample. Furthermore, when training the voice imitating TTS model, we held out 10 speakers’ data for test set since we wanted to check if the model can generate unseen speakers’ voices. The profiles of 10 held out speakers are shown in Table 1. We selected them to have similar distribution with training data in terms of gender, age, and accent.

For the Tacotron’s parameters, we basically followed specifications written in the original Tacotron paper except the reduction factor r (Wang et al., 2017). We used 5 for the r

, which means generating 5 spectrogram frames at each time-step. For hyperparameters of the speaker embedder network, we used the following settings. We used 5-layered 1D-convolutional neural network with 128 channels and window size of 3. The first 2 layers have stride of 1 and the remaining 3 layers have stride of 2. We used 2 linear layers with 128 hidden units after the convolutional layers. We used ReLU as a nonlinearity and applied batch normalization for every layer

(Ioffe & Szegedy, 2015). We also applied dropout with ratio of 0.5 to improve generalization (Srivastava et al., 2014). The last layer of the speaker embedder network is a learnable projection layer without nonlinearity and dropout.

We used mini-batch size of 32. During the training, limited capacity of GPU’s memory prevented us from loading a mini-batch of long sequences at once. To maximize the utilization of data, we used truncated backpropagation through time (Rumelhart et al., 1985)

. We used gradient clipping to avoid the exploding gradient problem

Similarly, we analyzed spectrograms to check whether the voice imitating TTS can generalize well on the test set. Note that, the multi-speaker TTS included the test set of the voice imitating TTS for its training data, because otherwise multi-speaker TTS cannot generate speech for unseen speakers. In Figure 6, we also could observe spectrograms from generated samples showing similar pattern, especially for the pitch of each speaker. With these results, we conjecture that the model at least learned to encode pitch information in the speaker embedding, and it was generalizable to the unseen speakers.

For the second survey, we made speaker identification questions to check whether generated speech samples contain distinct characteristics. The survey consists of 40 questions, where each question has 3 audio samples: ground truth sample and two generated samples. The two generated samples were from the same TTS model, but each of which conditioned on different speakers’ index or speech samples. The participants are asked to choose one speech sample that sounds mimicking the same speaker identity of the ground truth speech sample. From the crowdsourcing platform, we found 50 participants for surveying the voice imitating TTS and other 50 participants for surveying the multi-speaker TTS model. The resulted speaker identification accuracies were 60.1% and 70.5% for the voice imitating TTS and the multi-speaker TTS respectively. Considering random selection will score 50% of accuracy, we may argue higher accuracies than 50% reflect distinguishable speaker identity in the generated speech samples. By its nature of the problem, it is more difficult to generate distinct voice for the voice imitating TTS. Because the voice imitating TTS must capture a speaker’s characteristic in a short sample whereas the multi-speaker TTS can learn the characteristic from vast amount of speech data. Considering these difficulties, we think the score gap between the two models are explainable.