Visual analytics is a subdomain of data analysis which combines both human and machine analytical abilities and is applied mostly in decision-making and data mining tasks. Triclustering, based on Formal Concept Analysis (FCA), was developed to detect groups of objects with similar properties under similar conditions. It is used in Social Network Analysis (SNA) and is a basis for certain types of recommender systems. The problem of triclustering algorithms is that they do not always produce meaningful clusters. This article describes a specific triclustering algorithm and a prototype of a visual analytics platform for working with obtained clusters. This tool is designed as a testing frameworkis and is intended to help an analyst to grasp the results of triclustering and recommender algorithms, and to make decisions on meaningfulness of certain triclusters and recommendations. 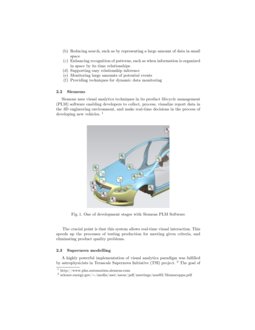 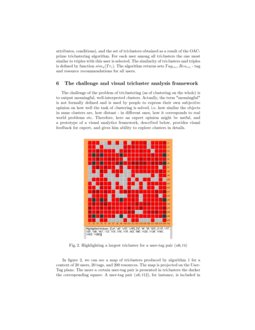 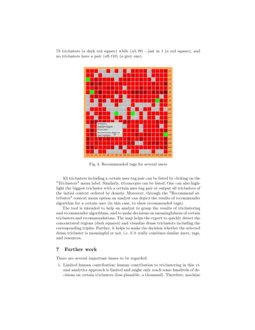 As a natural extension of FCA, Triadic Concept Analysis (TCA) manages triadic data in a form of objects, their attributes, and conditions under which these objects have certain attributes [2]. A common example is a social network analysis with a context including users (objects), events they take part in (attributes) and interests (which might be regarded as conditions under which a user participates in a certain event).

As the task of finding all concepts or triconcepts is computationally challenging, certain relaxations of these terms have been introduced: biclusters [3] and triclusters [4]. Here we address triclusters, i.e. combinations of sets of objects, their attributes, and conditions where not every object must have each attribute. Triclustering provides an output in the form of object clusters with similar attributes under similar conditions. Therefore, it is applied to mining users with common interests, applicants with similar competences or books labelled by close tags [5], [6]. Triclustering is also a basis for a certain type of recommender systems [7], [8].

Visual analytics is an increasingly popular branch of Computer Science which combines both human and computer qualities to solve a range of problems that might lay beyond the power of man or machine separately. Actually, it is a subdomain of data analysis focusing on decision-making through data preprocessing, data mining and interactive user interfaces. For instance, Siemens PLM software allows developers to collect, process, visualize report data in the 3D engineering environment, and make real-time decisions in the process of developing new vehicles. The same method is used in situational and decision-making centres, in nuclear power energetics, and in crime investigations.

In this paper, we explore these topics and describe a framework which uses visual analytics to solve some problems in FCA.

Generalizing and selecting crucial aspects of various definitions of visual analytics [9], [10], here we propose the following one:

Visual analytics is a subdomain of data analysis focusing on analytical reasoning on the basis of interactive user interfaces in process of data mining, data preprocessing, knowledge representation, discovering dependencies, and decision-making.

Let us further consider core peculiarities of visual analytics and the tasks it is designed to solve: [11]

The crucial point is that this system allows real-time visual interaction. This speeds up the processes of testing production for meeting given criteria, and eliminating product quality problems.

A highly powerful implementation of visual analytics paradigm was fulfilled by astrophysicists in Terascale Supernova Initiative (TSI) project. 222science.energy.gov/∼/media/ascr/ascac/pdf/meetings/mar03/Mezzacappa.pdf The goal of the project is to give scientists from various fields access to powerful computation resources in order to produce knowledge in the sphere of fundamental science. In particular, the question of supernova birth was studied which encompassed 3D turbulence, gravitation and magnetic field modelling. The scale of the investigation was impressive - the modelling resulted in terabytes of data. The analysis of such amount of data lays beyond human power but combining human and machine capabilities allowed to make some inferences from all the bulk of data.

A formal context in FCA is a triple K=(G,M,I) where G is a set of objects, M is a set of attributes, and the binary relation I⊆G×M shows which object possesses which attribute. gIm denotes that object g has attribute m. For subsets of objects and attributes A⊆G and B⊆M Galois operators are defined as follows:

An alternative way is to make a relaxation of the definition of a formal concept. One of them is an OA-bicluster [3]. If (g,m)∈I , then (m′,g′) is called an object-attribute bicluster with the density

Bicluster density represents the percent of object-attribute pairs from the initial context in a certain bicluster.

Here are the main properties of OA-biclusters:

A bicluster (A,B) is called dense if its density is greater than a predefined minimum threshold, i.e. ρ((A,B))≥ρmin. The above mentioned properties show that OA-biclusters differ from formal concepts since unit density is not required. Below follows an illustrative example for triconcepts and triclusters.

As a solution for three-way data in FCA, Triadic Concept Analysis (TCA) was introduced [2].

A triadic context K=(G,M,B,I) consists of sets G (objects), M (attributes), B (conditions), and ternary relation I⊆G×M×B. An incidence (g,m,b)∈I shows that the object g has the attribute m under condition b.

The tricluster T=(A,B,C) is called dense if its density is greater than a predefined minimum threshold, i.e. ρ(T)≥ρmin. Just similarly to biclusters, triclusters have the following properties:

Let us consider a sample context K=(U,I,S,Y), where U={Ed, Leo, Max} is a set of users, I={soccer, hockey} — their interests, S={soccer.com, nhl.com, fifa.com, hockeycanada.ca} — sites they have added to bookmarks, Y⊆U×I×S is a ternary relation between U,I,S which can be expressed by Table 1:

Here, generally, we have |U||I||S|=24 triples to analyze. But actually, this number is reduced to 11, as there are lots of void triples present.

Actually, users Ed, Leo and Max share the same interests and almost the same sites (all the difference is that Leo has not bookmarked hockeycanada.ca). The idea of clustering here is presented by a tricluster T=({u1,u2,u3},{i1,i2}, {s1,s2,s3,s4}) with density ρ=11/24≅0.46. It is just one pattern to analyze instead of 11 in case of triples.

The hard core of the algorithm is quite simple: for all incidences (g,m,b)∈I for a triadic context K=(G,M,B,I) we build a tricluster T=((m,b)′,(g,b)′,(g,m)′). If a tricluster is unique and its density exceeds a predefined minimum threshold then it is added to an array of triclusters. A pseudocode of algorithm for OAC-triclustering based on prime operators is presented below.

5.2 Recommender algorithm based on triclustering

The recommender algorithm applied to sets of a tricontext is analogous to the one described in [7]. It takes as an input a context of three sets (objects, attributes, conditions), and the set of triclusters obtained as a result of the OAC-prime triclustering algorithm. For each user among all triclusters the one most similar to triples with this user is selected. The similarity of triclusters and triples is defined by function simu(Tri). The algorithm returns sets Tagrec,Resrec - tag and resource recommendations for all users.

The challenge of the problem of triclustering (as of clustering on the whole) is to output meaningful, well-interpreted clusters. Actually, the term "meaningful" is not formally defined and is used by people to express their own subjective opinion on how well the task of clustering is solved, i.e. how similar the objects in same clusters are, how distant - in different ones, how it corresponds to real world problems etc. Therefore, here an expert opinion might be useful, and a prototype of a visual analytics framework, described below, provides visual feedback for expert, and gives him ability to explore clusters in details.

In figure 2, we can see a map of triclusters produced by algorithm 1 for a context of 20 users, 20 tags, and 200 resources. The map is projected on the User-Tag plane. The more a certain user-tag pair is presented in triclusters the darker the corresponding square. A user-tag pair (u6,t12), for instance, is included in 73 triclusters (a dark red square) while (u5,t9) - just in 1 (a red square), and no triclusters have a pair (u9,t10) (a grey one).

The tool is intended to help an analyst to grasp the results of triclustering and recommender algorithms, and to make decisions on meaningfulness of certain triclusters and recommendations. The map helps the expert to quickly detect the concentrated regions (dark squares) and visualize dense triclusters including the corresponding triples. Further, it helps to make the decision whether the selected dense tricluster is meaningful or not, i.e. if it really combines similar users, tags, and resources.

There are several important issues to be regarded:

Visual analytics, as one of the flourishing domains of data analysis, can be useful in mining objects with similar attributes under similar conditions in a context of social network data. A special algorithm was developed for uniting such objects, attributes, and conditions in triclusters. The program framework under development is intended to graphically display the results of this algorithm and to empower an analyst to decide on the meaningfulness of clusters and tags or resources recommendations for objects.

The author would like to thank his colleagues from Higher School of Economics Sergei Kuznetsov and Dmitry Ignatov for their well-timed advice and support during this work. He also expresses gratitude to Stanislav Klimenko from Moscow Institute of Physics and Technology for consulting in visual analytics.