Medical imaging contains the essential information for rendering diagnostic and treatment decisions. Inspecting (visual perception) and interpreting image to generate a report are tedious clinical routines for a radiologist where automation is expected to greatly reduce the workload. Despite rapid development of natural image captioning, computer-aided medical image visual perception and interpretation remain a challenging task, largely due to the lack of high-quality annotated image-report pairs and tailor-made generative models for sufficient extraction and exploitation of localized semantic features, particularly those associated with abnormalities. To tackle these challenges, we present Vispi, an automatic medical image interpretation system, which first annotates an image via classifying and localizing common thoracic diseases with visual support and then followed by report generation from an attentive LSTM model. Analyzing an open IU X-ray dataset, we demonstrate a superior performance of Vispi in disease classification, localization and report generation using automatic performance evaluation metrics ROUGE and CIDEr. 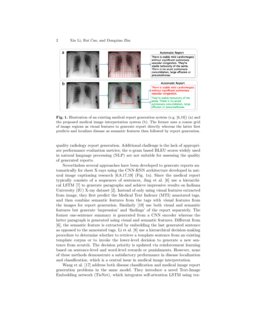 X-ray is a widely used medical imaging technique in clinics for diagnosis and treatment of thoracic diseases. Medical image interpretation, including both disease annotation and report writing, is a laborious routine for radiologists. Moreoever, the quality of interpretation is often quite diverse due to the differential levels of experience, expertise and workload of the radiologists. To release radiologists from their excessive workload and to better control quality of the written reports, it is desirable to implement a medical image interpretation system that automates the visual perception and cognition process and generates draft reports for radiologists to review, revise and finalize.

Despite the rapid and significant development, the existing natural image captioning models, e.g. [7, 18], fail to perform satisfactorily on medical report generation. The major challenge lies in the limited number of image-report pairs and relative scarcity of abnormal pairs for model training, which are essential for quality radiology report generation. Additional challenge is the lack of appropriate performance evaluation metrics; the n

-gram based BLEU scores widely used in natural language processing (NLP) are not suitable for assessing the quality of generated reports.

Nevertheless several approaches have been developed to generate reports automatically for chest X-rays using the CNN-RNN architecture developed in natural image captioning research [6, 8, 17, 19] (Fig. 1a). Since the medical report typically consists of a sequences of sentences, Jing et al. [6] use a hierarchical LSTM [7] to generate paragraphs and achieve impressive results on Indiana University (IU) X-ray dataset [2]

use a hierarchical decision-making procedure to determine whether to retrieve a template sentence from an existing template corpus or to invoke the lower-level decision to generate a new sentence from scratch. The decision priority is updated via reinforcement learning based on sentence-level and word-level rewards or punishments. However, none of these methods demonstrate a satisfactory performance in disease localization and classification, which is a central issue in medical image interpretation.

We present an automatic medical image interpretation system with in situ visual support striving for a better performance in both image annotation and report generation (Fig. 1b). To our knowledge this is among the first attempts to exploit disease localization for X-ray image report generation with visual supports. Our contributions are in four-fold: (1) we describe an integrated image interpretation framework for disease annotation and medical report generation, (2) we transfer knowledge from large image data sets (ChestX-ray8 [16]

[2]), (3) we evaluate suitability of the NLP evaluation metrics for medical report generation, and (4) we demonstrate the functionality of localizing the key finding in an X-ray with a heatmap.

Our workflow (Fig. 2) first annotates an X-ray image by classifying and localizing thoracic diseases (Fig. 2a) and then generates the corresponding sentences to build up the entire report (Fig. 2b). Fig. 2c displays the structure of attentive LSTM used to generate reports.

Fig. 2a shows our classification module built on a 121-layer Dense Convolutional Network (DenseNet) [5]. Similar to [12], we replace the last fully-connected layer with a new layer of dimension M, where M is the number of diseases. This is a multiple binary classification problem that input is a frontal view X-ray image X

and output is a binary vector

. The binary cross-entropy loss function is defined as:

is the probability for a target disease

to localize disease with a heatmap. Gard-CAMs uses the gradient information and flows it back to the final convolutional layer to decipher the importance of each neuron in classifying an image to disease

m. Formally, let Ak be the kth feature maps and weight wmk represents importance of the feature map k for the disease m. We first calculate the gradient of the score for class m, zm (before the sigmoid), with respect to a feature map Ak, i.e., ∂zm∂Ak. Thus wmk are calculated by: wmk=1N∑i∑j∂zm∂Ak. (i,j) represents the coordinates of a pixel, and N is the total number of pixels. We then generate a heatmap for disease m by applying weighted average of Ak

, followed by a ReLU activation:

Hm=ReLU(∑kwmkAk). The localized semantic features to predict disease m are identified and visualized with the heatmap Hm. Similar to [16], we apply a thresholding based bounding box (B-Box) generation method. The B-Box bounds pixels whose heatmap intensity is above 90% of the maximum intensity. The resulting region of interest is then cropped for next level modeling.

Fig. 2b illustrates the process of report generation. If there is no active thoracic disease found in an X-ray, a report will be directly generated by an attentive LSTM based on the original X-ray as shown in the green dashed box. Otherwise (as shown in the red dashed box), the cropped subimage with localized disease from the classification module (Fig. 2a) is used to generate description of abnormalities whereas the original X-ray is used to generate description of normalities in the report.

As shown in the Fig. 2c, the attentive LSTM is based on an encoder-decoder structure [18], which takes either the original X-ray image or the cropped subimage corresponding to abnormal region as the input and generates a sequence of sentences for the entire report. Our encoder is built on a pre-trained ResNet-101 [4], which extracts the visual features matrix F∈R2048×196 (reshaped from 2048×14×14) from the last convolutional layer followed by an adaptive average pooling layer. Each vector Fk∈R2048 of F represents one regional feature vector, where k={1,...,196}.

The LSTM decoder takes F as input and generates sentences by producing a word wt at each time t. To utilize the spatial visual attention information, we define the weights αtk, which can be interpreted as the relative importance of region feature Fk at time t. The weights αtk

is computed by a multilayer perceptron

Datasets. We use the IU Chest X-ray Collection [2], an open image dataset with 3955 radiology reports paired with chest X-rays for our experimental evaluation. Each report contains three sections: impression, findings and Medical Subject Headings (MeSH) terms. Similar to [6, 19], we generate sentences in ‘impression’ and ‘findings’ together. The MeSH terms are used as labels for disease classification [17] as well as the follow-up report generation with abnormality and normality descriptions. We convert all the words to lower-case, remove all non-alphanumeric tokens, replace single-occurrence tokens with a special token and use another special token to separate sentences. We filter out images and reports that are non-relevant to the eight common thoracic diseases included in both ChestX-ray8 [16] and IU X-ray datasets [2], resulting in a dataset with 2225 pairs of X-ray image and report. Finally, we split all the image-report pairs into training, validation and testing dataset by ratio 7:1:2.

We implement our model on a GeForce GTX 1080ti GPU platform using PyTorch. The dimension of all hidden layers and word embeddings are set to

512. The network is trained with Adam optimizer with a mini-batch size of 16. The training stops when the performance on validation dataset does not increase for 20epochs. We do not fine-tune the DenseNet pretrained with ChestX-ray8 [16] and ResNet pretrained with ImageNet due to the small sample size of IU X-ray dataset [2]. For each disease class, a specific pair of LSTMs are trained to ensure consistency between the predicted disease annotation(s) and the generated report. For the disease classes with less than 50 samples, we train a shared attentive LSTM across the classes to generate normality description of the report.

Evaluation of Automatic Medical Image Reports. We use the metrics for NLP tasks such as BLEU [11], ROUGE [9], and CIDEr [1] for automatic performance evaluation. Our model outperforms all baseline models [3, 10, 13, 15] and demonstrates the best CIDEr and ROUGE scores among all the advanced methods specifically designed for medical report generation [6, 8, 19], despite the fact that we only use a single frontal view X-ray. While BLEU scores measure the percentage of consistency between the automatic report and the manual report in light of the automatic report (precision), it is not illuminative in assessing the amount of information captured in the automatic report in light of the manual report (recall). In real-world clinical applications, both recall and precision are critical in evaluating the quality of an automatic report.

, which may decreases recall but does not affect precision. Thus, the automatic report missing the key disease information can still achieve high BLEU scores nevertheless it provides limited insight for medical image interpretation. Therefore, ROUGE is more suitable than BLEU for evaluating the quality of automatic reports since it measures both precision and recall. Further, CIDEr is more suitable for our purpose than ROUGE and BLEU since it captures the notions of grammaticality, saliency, importance and accuracy

Evaluation of Disease Classification. Although ROUGE and CIDEr scores are effective in evaluating the consistency of an automatic report to a manual report, none of them, however, are designed for assessing the correctness of medical report annotation in terms of common thoracic diseases. The latter is another key output of a useful image interpretation system. For example, the automatically generated sentence: “no focal airspace consolidation, pleural effusion or pneumothorax” is considered as similar to the manually written sentence: “persistent pneumothorax with small amount of pleural effusion” using both ROUGE and CIDEr scores despite the completely opposite annotations. Therefore, we assess the accuracy in medical report annotation by comparing with TieNet [17] in disease classification using Area Under the ROC (AUROC) as the metric. Our result outperforms TieNet’s classification module in 7 out of 8 diseases (Table 4, Fig. 4). As we discussed before, the inferior performance of TieNet may due to the fact that it trades the image classification performance for report generation performance. On the contrary, our model exploits the former to enhance the latter via a bi-level attention.

Example System Outputs. Fig. 5 shows two example outputs each with a generated report and image annotation. The first row presents an annotated “Normal” case whereas the second row presents an annotated “Cardiomegaly” case with the disease localized in a red bounding box on the heatmap generated from our classification and localization module. The results show that our medical interpretation system is capable of diagnosing thoracic diseases, highlighting the key findings in X-rays with heatmaps and generating well-structured reports.

In summary, we propose a bi-level attention mechanism for automatic X-ray image interpretation. Using only a single frontal view chest X-ray, our system is capable of accurately annotating X-ray images and generating quality reports. Our system also provides visual supports to assist radiologists in rendering diagnostic decisions. With more quality training data becomes available in the near future, our medical image interpretation system can be improved by: (1) incorporating both frontal and lateral view of X-rays, (2) predicting more disease classes, and (3) using hand labeled bounding boxes as the target of localization. We will also generalize our system by extracting informative features from Electronic Health Record (EHR) data and repeated longitudinal radiology reports to further enhance the performance of our system.