The goal of imitation learning (IL) is to learn a good policy from high-quality demonstrations. However, the quality of demonstrations in reality can be diverse, since it is easier and cheaper to collect demonstrations from a mix of experts and amateurs. IL in such situations can be challenging, especially when the level of demonstrators' expertise is unknown. We propose a new IL method called variational imitation learning with diverse-quality demonstrations (VILD), where we explicitly model the level of demonstrators' expertise with a probabilistic graphical model and estimate it along with a reward function. We show that a naive approach to estimation is not suitable to large state and action spaces, and fix its issues by using a variational approach which can be easily implemented using existing reinforcement learning methods. Experiments on continuous-control benchmarks demonstrate that VILD outperforms state-of-the-art methods. Our work enables scalable and data-efficient IL under more realistic settings than before. 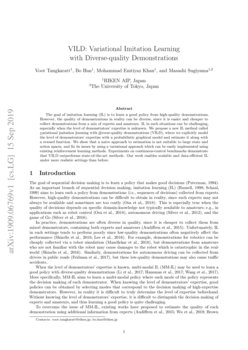 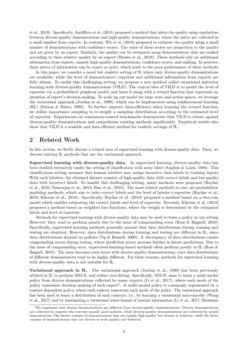 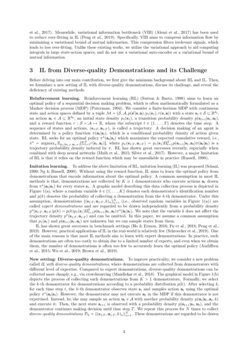 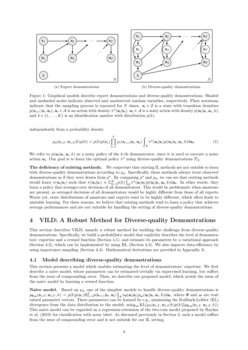 This paper tackles the problem of learning a questioner in the goal-orie...
Yen-Wei Chang, et al. ∙

Imitation Learning for Fashion Style Based on Hierarchical Multimodal Representation

In many settings, it is desirable to learn decision-making and control p...
Seyed Kamyar Seyed Ghasemipour, et al. ∙

The goal of sequential decision making is to learn a policy that makes good decisions (Puterman1994). As an important branch of sequential decision making, imitation learning (IL) (Russell1998; Schaal1999) aims to learn such a policy from demonstrations (i.e., sequences of decisions) collected from experts. However, high-quality demonstrations can be difficult to obtain in reality, since such experts may not always be available and sometimes are too costly (OsaPNBA018). This is especially true when the quality of decisions depends on specific domain-knowledge not typically available to amateurs; e.g., in applications such as robot control (OsaPNBA018), autonomous driving (SilverBS12), and the game of Go (SilverEtAl2016).

In this paper, we consider a novel but realistic setting of IL where only diverse-quality demonstrations are available, while the level of demonstrators’ expertise and additional information from experts are fully absent. To tackle this challenging setting, we propose a new method called variational imitation learning with diverse-quality demonstrations (VILD). The central idea of VILD is to model the level of expertise via a probabilistic graphical model, and learn it along with a reward function that represents an intention of expert’s decision making. To scale up our model for large state and action spaces, we leverage the variational approach (Jordan1999), which can be implemented using reinforcement learning (RL) (SuttonBarto1998). To further improve data-efficiency when learning the reward function, we utilize importance sampling to re-weight a sampling distribution according to the estimated level of expertise. Experiments on continuous-control benchmarks demonstrate that VILD is robust against diverse-quality demonstrations and outperforms existing methods significantly. Empirical results also show that VILD is a scalable and data-efficient method for realistic settings of IL.

In this section, we firstly discuss a related area of supervised learning with diverse-quality data. Then, we discuss existing IL methods that use the variational approach.

In supervised learning, diverse-quality data has been studied extensively under the setting of classification with noisy label (Angluin1988). This classification setting assumes that human labelers may assign incorrect class labels to training inputs. With such labelers, the obtained dataset consists of high-quality data with correct labels and low-quality data with incorrect labels. To handle this challenging setting, many methods were proposed (RaykarYZVFBM10; Nagarajan2013; HanYYNXHTS18). The most related methods to ours are probabilistic modeling methods, which aim to infer correct labels and the level of labeler’s expertise (RaykarYZVFBM10; KhetanLA18). Specifically, RaykarYZVFBM10 proposed a method based on a two-coin model which enables estimating the correct labels and level of expertise. Recently, KhetanLA18

proposed a method based on weighted loss functions, where the weight is determined by the estimated labels and level of expertise.

3 IL from Diverse-quality Demonstrations and its Challenge

Before delving into our main contribution, we first give the minimum background about RL and IL. Then, we formulate a new setting of IL with diverse-quality demonstrations, discuss its challenge, and reveal the deficiency of existing methods.

aims to learn an optimal policy of a sequential decision making problem, which is often mathematically formulated as a Markov decision process (MDP)

(Puterman1994). We consider a finite-horizon MDP with continuous state and action spaces defined by a tuple M=(S,A,p(s′|s,a),p1(s1),r(s,a)) with a state st∈S⊆Rds, an action at∈A⊆Rda, an initial state density p1(s1)

p(st+1|st,at), and a reward function r:S×A↦R, where the subscript t∈{1,…,T} denotes the time step. A sequence of states and actions, (s1:T,a1:T), is called a trajectory. A decision making of an agent is determined by a policy function π(at|st), which is a conditional probability density of action given state. RL seeks for an optimal policy π⋆(at|st) which maximizes the expected cumulative reward, i.e., π⋆=argmaxπEpπ(s1:T,a1:T)[ΣTt=1r(st,at)], where pπ(s1:T,a1:T)=p1(s1)ΠTt=1p(st+1|st,at)π(at|st) is a trajectory probability density induced by π

(MnihEtAl2015; SilverEtAl2017). However, a major limitation of RL is that it relies on the reward function which may be unavailable in practice (Russell1998).

To address the above limitation of RL, imitation learning (IL) was proposed (Schaal1999; NgR00). Without using the reward function, IL aims to learn the optimal policy from demonstrations that encode information about the optimal policy. A common assumption in most IL methods is that, demonstrations are collected by K≥1 demonstrators who execute actions at drawn from π⋆(at|st) for every states st. A graphic model describing this data collection process is depicted in Figure LABEL:figure:pgm_irl2

, where a random variable

k∈{1,…,K} denotes each demonstrator’s identification number and p(k) denotes the probability of collecting a demonstration from the k-th demonstrator. Under this assumption, demonstrations {(s1:T,a1:T,k)n}Nn=1 (i.e., observed random variables in Figure LABEL:figure:pgm_irl2) are called expert demonstrations and are regarded to be drawn independently from a probability density p⋆(s1:T,a1:T)p(k)=p(k)p1(s1)ΠTt=1p(st+1|st,at)π⋆(at|st). We note that the variable k does not affect the trajectory density p⋆(s1:T,a1:T) and can be omitted. In this paper, we assume a common assumption that p1(s1) and p(st+1|st,at) are unknown but we can sample states from them.

IL has shown great successes in benchmark settings (HoE16; FuEtAl2018; peng2018variational). However, practical applications of IL in the real-world is relatively few (schroecker2018generative). One of the main reasons is that most IL methods aim to learn with expert demonstrations. In practice, such demonstrations are often too costly to obtain due to a limited number of experts, and even when we obtain them, the number of demonstrations is often too few to accurately learn the optimal policy (AudiffrenVLG15; Wu2019; BrownGNN19).