Although great progress in supervised person re-identification (Re-ID) has been made recently, due to the viewpoint variation of a person, Re-ID remains a massive visual challenge. Most existing viewpoint-based person Re-ID methods project images from each viewpoint into separated and unrelated sub-feature spaces. They only model the identity-level distribution inside an individual viewpoint but ignore the underlying relationship between different viewpoints. To address this problem, we propose a novel approach, called Viewpoint-Aware Loss with Angular Regularization (VA-reID). Instead of one subspace for each viewpoint, our method projects the feature from different viewpoints into a unified hypersphere and effectively models the feature distribution on both the identity-level and the viewpoint-level. In addition, rather than modeling different viewpoints as hard labels used for conventional viewpoint classification, we introduce viewpoint-aware adaptive label smoothing regularization (VALSR) that assigns the adaptive soft label to feature representation. VALSR can effectively solve the ambiguity of the viewpoint cluster label assignment. Extensive experiments on the Market1501 and DukeMTMC-reID datasets demonstrated that our method outperforms the state-of-the-art supervised Re-ID methods. 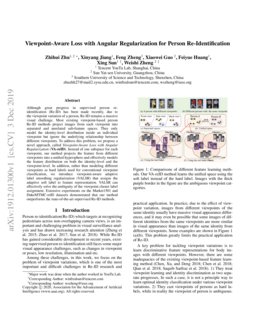 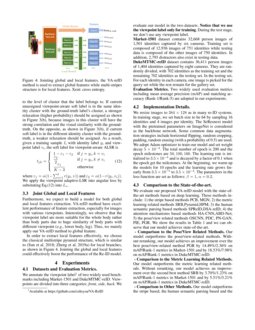 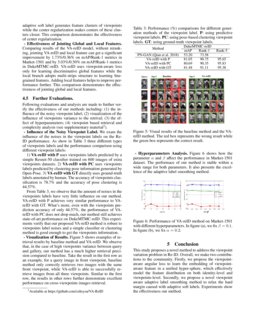 Person Re-identification in the 3D Space

Vehicle re-identification (Re-ID) is an active task due to its importanc...
Aihua Zheng, et al. ∙

In this paper, we propose a semi-supervised framework to address the ove...
Jean-Paul Ainam, et al. ∙

Person re-identification (Person ReID) is a challenging task due to the ...
Wangmeng Xiang, et al. ∙

Person re-identification(Re-ID) which targets at recognizing pedestrians across non-overlapping camera views, is an important and challenging problem in visual surveillance analysis and has drawn increasing research attention [27, 24, 20]. While Re-ID has gained considerable development in recent years, existing supervised person re-identification still faces some major visual appearance challenges, such as changes in viewpoint or poses, low resolution, illumination and etc.

Among these challenges, in this work, we focus on the problem of viewpoint variations, which is one of the most important and difficult challenges in Re-ID research and practical application. In practice, due to the effect of viewpoint variation, images from different viewpoints of the same identity usually have massive visual appearance differences, and it may even be possible that some images of different identities from the same viewpoints are more similar in visual appearance than images of the same identity from different viewpoints. Some examples are shown in Figure 1 (a)(b). This problem greatly limits the practical application of Re-ID.

To solve this problem, we propose a novel angular-based feature learning method that projects all features into a unified subspace and directly models the distribution of the features from different viewpoints. As shown in Figure 1

In summary, this work develop a joint learning model for the identity and viewpoint discrimination learning, where in particular we introduce the soft multilabel to model viewpoint aware feature distribution for overcoming the ambiguity problem on viewpoint labelling and greatly solve the viewpoint variations. The main contributions include:

Given a query image, the target of Re-ID is to get a ranking list of images from gallery set across non-overlapping camera views. Define an image Ii=(xi,yi,vi) where xi

denotes the feature extracted by a deep model of the

i-th image, yi is the identity label and vi is the viewpoint label. Notice that each image xi has only one viewpoint label vi∈{front,side,back}. Given a training set D={(xi,yi,vi)} with N

xi is a global ReID feature extracted by a CNN backbone (e.g., ResNet, DenseNet) denoted as F(Θ;Ii) where Θ denotes the parameters of CNN.

Furthermore, as shown in the bottom-right rectangle in Figure 2, at the viewpoint-level, a novel viewpoint-aware adaptive LSR regularization item is used in Lv to eliminate the hard margin between viewpoint clusters. At the identity-level, a small adaptive label smoothing regularization is explored to effectively increase the generalization ability of our model.

denote the deep learning ReID feature of a image, and

Wy denote the y-th column of the weights W∈Rd∗K. As a result, the prediction probability of I belongs the identity y is:

We remove the bias and normalize the feature x and the weight W as advised in arcface loss [5]. Generally, weight normalization helps to improve class imbalance, and feature normalization is instrumental in generalization of metric space. Therefore, all the features can be projected onto a hypershere with the same length, and the probability of deep feature x belonging to identity y is equivalent to the cosine distance between xi and Wy:

denotes the angle between the feature vector

x and the y-th column of Wy: cos(θy)=WTy⋅x||Wy||⋅||x||. m is a margin that is used to improve the discriminative ability of classification, and s is the scale factor used to promote convergence.

Based on previous experience [11, 5], the angular loss helps to model a better discriminative distribution of identities. Analogously, we extend the identity-level angular loss to the proposed viewpoint-aware loss (VA-reID). From Eq.(4), we observe that the y-th column of the weight Wy can be viewed as the center of identity y. To get a higher probability of image I belonging to y, we need to pull the feature vector xi closer to center Wy

. To model the distribution of different viewpoints, each identity class is further classified into

Given a training sample Ii with identity label yi and viewpoint label vi, the identity classification loss Ly and viewpoints-aware loss Lv are:

where p and t is the classification label. The traditional methods use the hard label for features learning, e.g.,

which ignore the ambiguity problem on viewpoint labelling. To overcome this problem, we introduce the soft label learning methods. Furthermore, to maintain the visual similarity between features from the same person but with different viewpoints, we propose to the center regularization term to connect identity and viewpoint discrimination. It helps to pull the V viewpoint centers Wij closer to the corresponding identity center and the formula is:

- Adaptive Identity Label Learning. In this section, we introduce the soft identity label to replace the conventional hard identity label. The soft label will get self-adaption dynamically according to the prediction probability and have better performance against noise data and over-fitting.

Assumption 1. The network tends to prioritize learning simple patterns of real data firstly and then the noise [1].

As aforementioned, in cross entropy loss, the one-hot encoding is used to be as ground-truth probability distribution and thus the model tends to maximize the expected log-likelihood of one label, which may result in over-fitting and harm the generalization ability of model. Label smoothing regularization(LSR)

[21] is proposed to further address the problems. The probability distribution formula of LSR is

where ε is a manual value. It replaces the one-hot hard label with the soft label by introduce a small manual parameter ε to adjust the probability distribution. This encourages the model to lower some confidence on other categories except the ground-truth. However, notice that ε

We develop a new smoothing parameter ε=α(1−q(j) , which is related to the prediction probability of network. α is a multiplicative scaling coefficient. When the output probability q(j) is large, we will get a small ε and get a large confidence on this category. In contrast, when the output probability q(j) is small, we will get large ε and a large confidence on other categories. The adaptive label smoothing regularization have better performance against noise data and over-fitting. An illustration of the adaptive soft identity label is in Figure 3(a). We apply the adaptive-LSR (ALSR) into the identity-level by subsituting Eq.(11) into Ly.

Assumption 2. The viewpoint of person in reality is a continuous value rather than the hard one.

Based on this assumption, we extend the ALSR to a viewpoint-aware angular loss, i.e., Viewpoint-Aware ALSR (VALSR). As mentioned earlier, our proposed viewpoint-aware angular loss models two levels of distribution, i.e., the identity-level distribution (identity clusters) and the viewpoint-level distribution (viewpoint clusters). We split every identity label into three sub-categories according to the viewpoints (front, side, back) and thus each image is classified into 3K viewpoint-aware categories. We argue that, when assigning the soft label for viewpoint-aware angular loss, the degree of regularization will vary according to the level of cluster that the label belongs to. If current unassigned viewpoint-aware soft label is in the same identity cluster with the ground-truth label’s cluster, a stronger relaxation (higher probability) should be assigned as shown in Figure 3(b), because images in this cluster will have the strong correlation and the visual similarity with the ground-truth. On the opposite, as shown in Figure 3(b), if current soft label is in the different identity cluster with the ground-truth, a weaker relaxation should be assigned. As a result, given a training sample Ii with identity label yi and viewpoint label vi, the soft label for viewpoint-aware ALSR is

Furthermore, we expect to build a model for both global and local features extraction. VA-reID method have excellent performance of feature extraction, especially for images with various viewpoints. Interestingly, we observe that the viewpoint label are more suitable for the whole body rather than body parts due to huge similarity of body parts with different viewpoint (e.g., lower body, leg). Thus, we mainly apply our VA-reID method to global feature.

In order to extract local features effectively, we choose the classical multistripe pyramid structure, which is similar to [20, 25] for local branches, as shown in Figure 4. Jointing the global and local features could effectively boost the performance of the Re-ID model.

We annotate the viewpoint label111Available at https://github.com/zzhsysu/VA-ReID of two widely used benchmarks including Market-1501 and DukeMTMC-reID. Viewpoints are divided into three categories: front, side, back. We evaluate our model in the two datasets. Notice that we use the viewpoint label only for training. During the test stage, we don’t use any viewpoint label.

as in many re-ID systems. In training stage, we set batch size to be 64 by sampling 16 identities and 4 images per identity. The SeResnext model with the pretrained parameters on ImageNet is considered as the backbone network. Some common data augmentation strategies include horizontal flipping, random cropping, padding, random erasing (with a probability of 0.5) are used. We adopt Adam optimizer to train our model and set weight decay

. The total number of epoch is 200 and the epoch milestones are

4.3 Comparison to the State-of-the-art.

Following evaluations and analysis are made to further verify the effectiveness of our methods including: (1) the influence of the noisy viewpoint label; (2) visualization of the influence of viewpoints variance to the retrival; (3) the effect of hyperparameters; (4) viewpoint based retrieval and complexity analysis (see supplementary material

- Visualization of Results. Figure 5 shows examples of retrieval results by baseline method and VA-reID. We observe that, in the case of high viewpoints variance between query and gallery, our method has a much higher retrieval precision compared to baseline. Take the result in the first row as an example, for a query image in front viewpoint, baseline method only correctly retrieves two images with the same front viewpoint, while VA-reID is able to successfully retrieve images from all three viewpoints. Similar to the first row, the results in other rows further demonstrate excellent performance on cross-viewpoints images retrieval.

- Hyperparameters Analysis. Figure 6 shows how the parameter α and β affect the performance in Market-1501 dataset. The performace of our method is stable within a wide range for both parameters. It also presents the excellence of the adaptive label smoothing method.

This study proposes a novel method to address the viewpoint variation problem in Re-ID. Overall, we make two contributions to the community. Firstly, we propose the viewpoint-aware angular loss to learn the embedding of viewpoint-aware feature in a unified hyper-sphere, which effectively model the feature distribution on both identity-level and viewpoints-level. Secondly, we propose a novel viewpoint aware adaptive label smoothing method to relax the hard margin caused with adaptive soft labels. Experiments show the effectiveness our method.