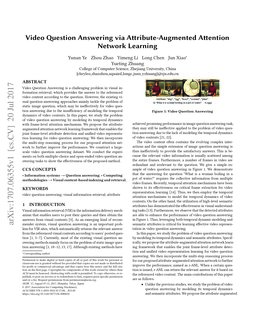 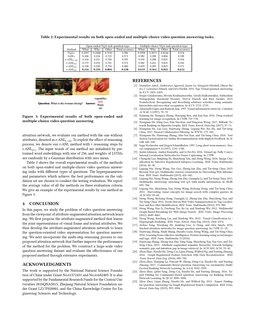 The video content often contains the evolving complex interactions and the simple extension of image question answering is thus ineffectively to provide the satisfactory answers. This is because the relevant video information is usually scattered among the entire frames. Furthermore, a number of frames in video are redundant and irrelevant to the question. We give a simple example of video question answering in Figure 1. We demonstrate that the answering for question ”What is a woman boiling in a pot of water?” requires the collective information from multiple video frames. Recently, temporal attention mechanisms have been shown to its effectiveness on critical frame extraction for video representation learning (Wang et al., 2012a). Thus, we then employ the temporal attention mechanisms to model the temporal dynamics of video contents. On the other hand, the utilization of high-level semantic attributes has demonstrated the effectiveness in visual understanding tasks (Nie et al., 2012). Furthermore, we observe that the detected attributes are able to enhance the performance of video question answering in Figure 1. Thus, leveraging both temporal dynamic modeling and semantic attributes is critical for learning effective video representation in video question answering.

In this paper, we study the problem of video question answering by modeling its temporal dynamics and semantic attributes. Specifically, we propose the attribute-augmented attention network learning framework that enables the joint frame-level attribute detection and unified video representation learning for video question answering. We then incorporate the multi-step reasoning process for our proposed attribute-augmented attention network to further improve the performance, named as r-ANL. When a certain question is issued, r-ANL can return the relevant answer for it based on the referenced video content. The main contributions of this paper are as follows:

Before presenting our method, we first introduce some basic notions and terminologies. We denote the question by q∈Q, the video by v∈V and the attributes by a∈A, respectively. The frame-level representation of video v is given by v=(v1,v2,…,vN), where N is the length of video v. We then denote the frame-level representation of attribute av for video v by av=(av,1,av,2,…,av,N), where av,i is the set of the attributes for the i-th frame. We then denote W as the vocabulary set or dictionary, where wi∈R|W|

is the one-hot word representation. Since both video and question content are sequential data with variant length, it is natural to choose the variant recurrent neural network called long-short term memory network (LSTM)

Using the notations above, the problem of video question answering is formulated as follows. Given the set of videos V, questions Q and attributes A, our goal is to learn the attribute-augmented attention network such that when a certain question is issued, r-ANL can return the relevant answer for it based on the referenced video content. We present the details of the attribute-augmented attention network learning framework in Figure 2.

In this section, we propose the attribute-augmented attention network to learn the joint representation of multimodal video content and detected attributes according to the question for both multiple choice and open-ended video question answering tasks.

where Wq and Wv are parameter matrices and bt

is bias vector. The

which is recursively updated. The joint question-oriented video representation is then returned after the R-th reasoning process update, given by zR. The learning process of reasoning attribute-augmented attention networks in case of r=2 is illustrated in Figure 2.

, a softmax function is then employed to classify

zR into one of the possible answers as

where Wy is the parameter matrix and by is the bias vector. On the other hand, for training the model for open-ended video question answering, we employ the LSTM decoder d(⋅) to generate free-form answers based on the updated joint question-oriented video representation zR. Given video v, question q and ground-truth answer y=(y1,y2,…,yM) and the generated answer o=(o1,o2,…,oM)

where 1[⋅] is the indicator function. We denote all the model coefficients including neural network parameters and the result embeddings by Θ. Therefore, the objective function in our learning process is given by

is the trade-off parameter between the training loss and regularization. To optimize the objective function, we employ the stochastic gradient descent (SGD) with the diagonal variant of AdaGrad.

We construct the dataset of video question-answering from the YouTube2Text data (Guadarrama et al., 2013) with natural language descriptions, which consists of 1,987 videos and 122,708 descriptions. Following the state-of-the-art question generation method, we generate the question-answer pairs from the video descriptions. Following the existing visual question answering approaches (Antol et al., 2015), we generate three types of questions, which are related to the what, who and other queries for the video. We split the generated dataset into three parts: the training, the validation and the testing sets. The three types of video question-answering pairs used for the experiments are summarized in Table 1. The dataset will be provided later.

We then preprocess the video question-answering dataset as follows. We first sample 40 frames from each video and then resize each frame to 300×300. We extract the visual representation of each frame by the pretrained ResNet (He et al., 2016b), and take the 2,048-dimensional feature vector for each frame (Zhao et al., 2016). We employ the pretrained word2vec model to extract the semantic representation of questions and answers (Zhao et al., 2015). Specifically, the size of vocabulary set is 6,500 and the dimension of word vector is set to 256. For training model for open-ended video question answering task, we add a token <eos> to mark the end of the answer phrase, and take the token <Unk> for the out-of-vocabulary word.

We evaluate the performance of our proposed r-ANL method on both multiple-choice and open-ended video question answering tasks using the evaluation criteria of Accuracy. Given the testing question q∈Qt and video v∈Vt with the groundtruth answer y, we denote the predicted answer by our r-ANL method by o. We then introduce the evaluation criteria of Accuracy below:

where Accuracy=1 (best) means that the generated answer and the ground-truth ones are exactly the same, while Accuracy=0 means the opposite. When we performance the multiple-choice video question answering task, we set the value of K to 1.

Unlike the previous visual question answering works, our r-ANL method learns the question-oriented video question with multiple reasoning process for the problem of video question answering. To study the effectiveness of attribute-augmented mechanism in our attention network, we evaluate our method with the one without attributes, denoted as r-ANL(−a). To exploit the effect of reasoning process, we denote our r-ANL method with r reasoning steps by r-ANL(r)

. The input words of our method are initialized by pre-trained word embeddings with size of 256, and weights of LSTMs are randomly by a Gaussian distribution with zero mean.

shows the overall experimental results of the methods on both open-ended and multiple-choice video question answering tasks with different types of questions. The hyperparameters and parameters which achieve the best performance on the validation set are chosen to conduct the testing evaluation. We report the average value of all the methods on three evaluation criteria. We give an example of the experimental results by our method in Figure