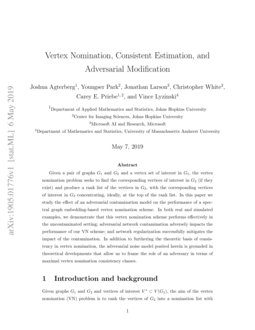 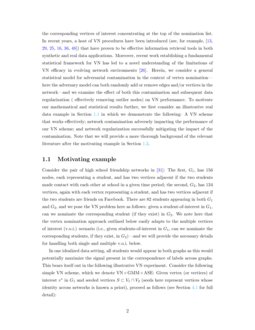 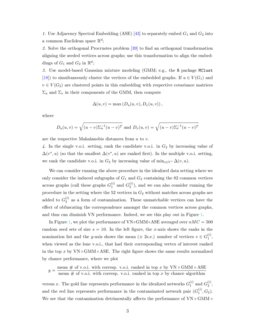 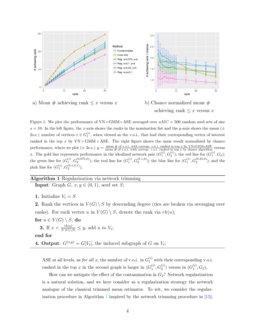 Vertex nomination between graphs via spectral embedding and quadratic programming

Given a network and a subset of interesting vertices whose identities ar...
Runbing Zheng, et al. ∙

Given a vertex of interest in a network G_1, the vertex nomination probl...
Vince Lyzinski, et al. ∙

On the role of features in vertex nomination: Content and context together are better (sometimes)

Vertex classification is vulnerable to perturbations of both graph topol...
Benjamin A. Miller, et al. ∙

On the Consistency of the Likelihood Maximization Vertex Nomination Scheme: Bridging the Gap Between Maximum Likelihood Estimation and Graph Matching

Given a graph in which a few vertices are deemed interesting a priori, t...
Vince Lyzinski, et al. ∙

Suppose that a graph is realized from a stochastic block model where one...
D. E. Fishkind, et al. ∙

Given graphs G1 and G2 and vertices of interest V∗⊂V(G1), the aim of the vertex nomination (VN) problem is to rank the vertices of G2 into a nomination list with the corresponding vertices of interest concentrating at the top of the nomination list. In recent years, a host of VN procedures have been introduced (see, for example, [coppersmith2012vertex, marchette2011vertex, LeePri2012, FisLyzPaoChePri2015, patsolic2017vertex, yoder2018vertex]) that have proven to be effective information retrieval tools in both synthetic and real data applications. Moreover, recent work establishing a fundamental statistical framework for VN has led to a novel understanding of the limitations of VN efficacy in evolving network environments [lyzinski2017consistent]

. Herein, we consider a general statistical model for adversarial contamination in the context of vertex nomination—here the adversary model can both randomly add or remove edges and/or vertices in the network—and we examine the effect of both this contamination and subsequent data regularization ( effectively removing outlier nodes) on VN performance. To motivate our mathematical and statistical results further, we first consider an illustrative real data example in Section

1.1 in which we demonstrate the following: A VN scheme that works effectively; network contamination adversely impacting the performance of our VN scheme; and network regularization successfully mitigating the impact of the contamination. Note that we will provide a more thorough background of the relevant literature after the motivating example in Section 1.2.

In one idealized data setting, all students would appear in both graphs as this would potentially maximize the signal present in the correspondence of labels across graphs. This bears itself out in the following illustrative VN experiment. Consider the following simple VN scheme, which we denote VN∘GMM∘ASE: Given vertex (or vertices) of interest v∗ in G1 and seeded vertices S⊂V1∩V2 (seeds here represent vertices whose identity across networks is known a priori), proceed as follows (see Section LABEL:sec:asegmm for full detail):

1. Use Adjacency Spectral Embedding (ASE) [sussman2014consistent] to separately embed G1 and G2 into a common Euclidean space Rd; 2. Solve the orthogonal Procrustes problem [schonemann1966generalized] to find an orthogonal transformation aligning the seeded vertices across graphs; use this transformation to align the embeddings of G1 and G2 in Rd; 3.

R package MClust [fraley1999mclust]) to simultaneously cluster the vertices of the embedded graphs. If u∈V(G1) and v∈V(G2) are clustered points in this embedding with respective covariance matrices Σu and Σv in their components of the GMM, then compute

We can consider running the above procedure in the idealized data setting where we only consider the induced subgraphs of G1 and G2 containing the 82 common vertices across graphs (call these graphs G(i)1 and G(i)2), and we can also consider running the procedure in the setting where the 52 vertices in G2 without matches across graphs are added to G(i)2 as a form of contamination. These unmatchable vertices can have the effect of obfuscating the correspondence amongst the common vertices across graphs, and thus can diminish VN performance. Indeed, we see this play out in Figure 1.

In Figure 1, we plot the performance of VN∘GMM∘ASE averaged over nMC=500 random seed sets of size s=10. In the left figure, the x-axis shows the ranks in the nomination list and the y-axis shows the mean (± 2s.e.) number of vertices v∈G(i)1, when viewed as the lone v.o.i., that had their corresponding vertex of interest ranked in the top x by VN∘GMM∘ASE. The right figure shows the same results normalized by chance performance, where we plot

versus x. The gold line represents performance in the idealized networks G(i)1 and G(i)2, and the red line represents performance in the contaminated network pair (G(i)1,G2). We see that the contamination detrimentally affects the performance of VN∘GMM∘ASE at all levels, as for all x, the number of v.o.i. in G(i)1 with their corresponding v.o.i. ranked in the top x in the second graph is larger in (G(i)1,G(i)2) versus in (G(i)1,G2).

The parameters x and y appearing in Algorithm 1 are unknown a priori, and to data-adaptively choose x and y, we sweep over possible values and choose the values of x and y that leads to the maximum network modularity in G(x,y)2 when clustering the vertices of G(x,y)2 via GMM∘ASE clustering; i.e., embed G(x,y)2 using ASE and cluster the embedding using a model-based GMM procedure. Given a clustering C, the modularity is defined as usual via

In the left panel of Figure 2, we plot the modularity of the GMM clustering in the trimmed G(x,y)2 as a function of x,y∈{0,0.05,0.1,0.15,0.2,0.25}. Note that we average the modularity values over nMC=500 seed sets of size s=10 (the same seed sets as used in Figure 1). The color indicates the value of the modularity, with darker red indicating lower values and lighter yellow–to–white indicating larger values. From the figure, we can see that modularity is maximized when y=0 (i.e., no large degree vertices trimmed) and x≈0.05–0.1. We note that this trimming process can cut core vertices as well as junk vertices, and core vertices cut from G2 can never be recovered via VN∘GMM∘ASE. This is demonstrated in the right panel of Figure 2, where the horizontal asymptotes for each trimming value indicates the maximum number of core vertices that are recoverable after regularization.

Figure 1 shows performance of VN∘GMM∘ASE averaged over 500 randomly chosen seed sets of size 10. While performance, on the whole, increases with proper regularization, the story can vary wildly from seed set to seed set. To demonstrate this, we plot the performance of VN∘GMM∘ASE over two particular seed sets (out of the 500 total used in Figure 1) in Figure 3. In the top panels, we plot performance in the setting of “bad” seeds; i.e., those seeds for which the regularization is unable to effectively mitigate the performance loss due to contamination. In the bottom panels, we plot performance in the setting of “good” seeds; i.e., those seeds for which the contamination negatively impacts performance, but subsequent regularization is able to effectively mitigate this performance loss. These two figures (and their respective chance normalizations in the right panels) point to the primacy of seed selection and of understanding what differentiates “good” versus “bad” seeds. While a full exploration of this is beyond the scope of the present text, this is an active area of our work.

In modern statistics and machine learning, graphs are a common way to take into account the complex relationships between data objects, and graphs have been used in applications across the biological (see, for example,

Loosely speaking, the vertex nomination problem can be stated as follows: given graphs G1 and G2 and vertices of interest V∗⊂V(G1), rank the vertices of G2 into a nomination list with the corresponding vertices of interest concentrating at the top of the nomination list (see Definition LABEL:def:VN for full detail). While vertex nomination has found applications in a number of different areas, such as social networks in [patsolic2017vertex] and data associated with human trafficking in [FisLyzPaoChePri2015], there are relatively few results establishing the statistical properties of vertex nomination. In [FisLyzPaoChePri2015], consistency is developed within the stochastic blockmodel random graph framework, where interesting vertices were defined via community membership. In [lyzinski2017consistent], the authors develop the concepts of consistency and Bayes optimality for a very general class of random graph models and a very general definition of what makes the v.o.i. interesting. In this paper, we further develop the ideas in [lyzinski2017consistent], with the aim of developing a theoretical regime in which to ground the notion of adversarial contamination in VN.

The adversarial framework we consider is similar to the model considered in [cai2015robust], and it is motivated by the example in the previous section in which the addition of the vertices without correspondences to G2

negatively impacted VN performance. Suppose that we are interested in performing vertex nomination on a graph pair, but an adversary randomly adds and deletes some edges and/or vertices in the second graph. For example, suppose we are trying to find influencers on Instagram by vertex matching to Facebook. An influencer that has knowledge of our procedure may attempt to make our algorithm fail in its nominations, perhaps by friending and de-friending people on Facebook. Even if our vertex nomination scheme was working well prior to encountering the adversary, it may not be after modification by the adversary. However, if the adversary adds edges/vertices to a graph with some probability and deletes edges/vertices with another probability, it may be possible to partially recover the structure of the original graph by removing vertices with unusual degree behavior

[edge2018trimming]. Such a modification is the graph analogue of the “trimmed mean” estimator [stigler1973asymptotic] from classical statistics.

Empirically, if we assume the adversary is modifying the data randomly, can we still predict whether our VN scheme will perform well on the regularized graph? From a statistical standpoint, what can we say about the statistical consistency of our original vertex nomination rule? Our motivating example suggests that it may be possible to recover performance after regularization, but theory is needed both to explain why that may be the case and to properly frame the problem. Hence, to answer these questions, we further develop the theory in [lyzinski2017consistent] to situate the notion of adversarial contamination within the idea of maximal consistency classes for a given VN rule (Section LABEL:sec:CC). In this framework, the goal of an adversary is to move a model out of a rule’s consistency class, while regularization enlarges the consistency class to (hopefully) thwart the adversary. While we are unable to rigorously establish this for the VN rule, VN∘GMM∘ASE, considered herein, we demonstrate with real and synthetic data examples that countering such an adversarial attack via network regularization can effectively ameliorate VN performance (Section LABEL:sec:data).

Notation: Note that the following notation will be used throughout. For a positive integer k, we will let Gk denote the set of k-vertex labled graphs, and we will let [k]={1,2,3,…,k}.

We will now rigorously define the VN problem and consistency within the VN framework. Combined with the results on consistency classes in Section LABEL:sec:CC, this will allow us to provide a statistical basis for understanding adversarial attacks in VN.

As in our motivating work in [lyzinski2017consistent], we will situate our analysis of the VN problem in the very general framework of nominatable distributions.

For a given n,m∈Z>0, the set of Nominatable Distributions of order (n,m), denoted Nn,m, is the collection of all families of distributions of the following form

The vertices in C are those that have a corresponding paired vertex in each graph; where corresponding can be defined very generally. Corresponding vertices need not correspond to the same person/user/account, rather corresponding vertices are understood as those that share a desired property across graphs. In particular, we will assume that the vertices of interest in G1 correspond to the vertices of interest in G2. Having access to the vertex labels would then render the VN problem trivial. To model the uncertainty often present in data applications, where the vertex labels (or correspondences) are unknown a priori we adopt the notion of obfuscation functions from [lyzinski2017consistent].