We propose a verified computation method for eigenvalues in a region and the corresponding eigenvectors of generalized Hermitian eigenvalue problems. The proposed method uses complex moments to extract the eigencomponents of interest from a random matrix and uses the Rayleigh–Ritz procedure to project a given eigenvalue problem into a reduced eigenvalue problem. The complex moment is given by contour integral and approximated by using numerical quadrature. We split the error in the complex moment into the truncation error of the quadrature and rounding errors and evaluate each. This idea for error evaluation inherits our previous Hankel matrix approach, whereas the proposed method requires half the number of quadrature points for the previous approach to reduce the truncation error to the same order. Moreover, the Rayleigh–Ritz procedure approach forms a transformation matrix that enables verification of the eigenvectors. Numerical experiments show that the proposed method is faster than previous methods while maintaining verification performance. 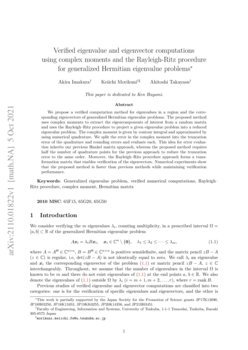 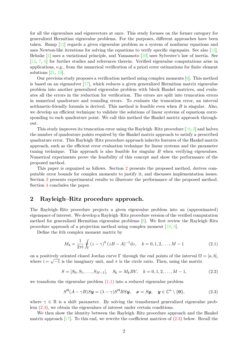 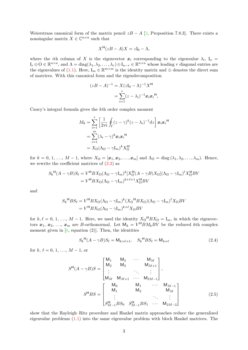 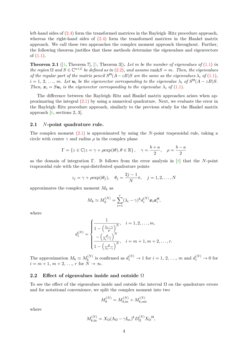 In this contribution, we extend a projection method for square matrices ...
Keiichi Morikuni, et al. ∙

About the foundation of the Kubo Generalized Cumulants theory. A revisited and corrected approach

Efficient method for calculating the eigenvalue of the Zakharov-Shabat system

In this paper, a direct method is proposed to calculate the eigenvalue o...
Shikun Cui, et al. ∙

On pole-swapping algorithms for the eigenvalue problem

Adaptive MCMC for Generalized Method of Moments with Many Moment Conditions

We consider verifying the m eigenvalues λi, counting multiplicity, in a prescribed interval Ω=[a,b]⊂R of the generalized Hermitian eigenvalue problem

where A=AH∈Cn×n, B=BH∈Cn×n is positive semidefinite, and the matrix pencil zB−A (z∈C) is regular, i.e, det(zB−A) is not identically equal to zero. We call λi an eigenvalue and xi the corresponding eigenvector of the problem (1.1) or matrix pencil zB−A, z∈C interchangeably. Throughout, we assume that the number of eigenvalues in the interval Ω is known to be m and there do not exist eigenvalues of (1.1) at the end points a, b∈R. We also denote the eigenvalues of (1.1) outside Ω by λi (i=m+1,m+2,…,r), where r=rankB.

[12] regards a given eigenvalue problem as a system of nonlinear equations and uses Newton-like iterations for solving the equations to verify specific eigenpairs. See also [13]. Behnke [1] uses a variational principle, and Yamamoto [20] uses Sylvester’s law of inertia. See [14, 7, 6]

for further studies and references therein. Verified eigenvalue computations arise in applications, e.g., from the numerical verification of a priori error estimations for finite element solutions

Our previous study proposes a verification method using complex moments [6]. This method is based on an eigensolver [17], which reduces a given generalized Hermitian matrix eigenvalue problem into another generalized eigenvalue problem with block Hankel matrices, and evaluates all the errors in the reduction for verification. The errors are split into truncation errors in numerical quadrature and rounding errors. To evaluate the truncation error, an interval arithmetic-friendly formula is derived. This method is feasible even when B is singular. Also, we develop an efficient technique to validate the solutions of linear systems of equations corresponding to each quadrature point. We call this method the Hankel matrix approach throughout.

This study improves its truncation error using the Rayleigh–Ritz procedure [18, 3] and halves the number of quadrature points required by the Hankel matrix approach to satisfy a prescribed quadrature error. This Rayleigh–Ritz procedure approach inherits features of the Hankel matrix approach, such as the efficient error evaluation technique for linear systems and the parameter tuning technique. This approach is also feasible for singular B when verifying eigenvalues. Numerical experiments prove the feasibility of this concept and show the performance of the proposed method.

This paper is organized as follows. Section 2 presents the proposed method, derives computable error bounds for complex moments to justify it, and discusses implementation issues. Section 3 presents experimental results to illustrate the performance of the proposed method. Section 4 concludes the paper.

on a positively oriented closed Jordan curve Γ through the end points of the interval Ω=[a,b], where i=√−1 is the imaginary unit, and π is the circle ratio. Then, using the matrix

where γ∈R is a shift parameter. By solving the transformed generalized eigenvalue problem (2.3), we obtain the eigenvalues of interest under certain conditions.

We then show the identity between the Rayleigh–Ritz procedure approach and the Hankel matrix approach [17]. To this end, we rewrite the coefficient matrices of (2.3) below. Recall the Weierstrass canonical form of the matrix pencil zB−A [2, Proposition 7.8.3]. There exists a nonsingular matrix X∈Cn×n such that

where the ith column of X is the eigenvector xi corresponding to the eigenvalue λi, Io=Ir⊕O∈Rn×n, and Λ=diag(λ1,λ2,…,λr)⊕In−r∈Rn×n whose leading r diagonal entries are the eigenvalues of (1.1). Here, Im∈Rm×m

⊕ denotes the direct sum of matrices. With this canonical form and the eigendecomposition

The complex moment (2.1) is approximated by using the N-point trapezoidal rule, taking a circle with center γ and radius ρ in the complex plane

as the domain of integration Γ. It follows from the error analysis in [8] that the N-point trapezoidal rule with the equi-distributed quadrature points

approximates the complex moment Mk as

2.2 Effect of eigenvalues inside and outside Ω

To see the effect of the eigenvalues inside and outside the interval Ω on the quadrature errors and for notational convenience, we split the complex moment into two

are associated with the eigenvalues inside and outside the interval Ω, respectively, for k=0, 1, …, M−1. Here, we used the notations

With the above approximation Mk≃M(N)k , we obtain the approximated transformation matrix

are associated with the eigenvalues inside and outside the region Ω, respectively. With this approximated transformation matrix S(N)k, the reduced complex moment Mk+ℓ+1 is approximated as

The approximated reduced complex moment is split into two

are associated with the eigenvalues inside and outside the region Ω, respectively, for k, ℓ=0, 1, …, M−1.

Let H<M=SH(A−γB)S and HM=SHBS be the block Hankel matrices in (2.12). Then, in the Rayleigh–Ritz procedure approach, they are approximated as

For convenience, we split the approximated block Hankel matrices into two

are associated with the eigenvalues inside and outside the region Ω, respectively,

To validate the eigenvalues of (2.3), it is straightforward to enclose the coefficient matrices of (2.3). Nevertheless, we exploit alternative quantities. To this end, we prepare the following lemma.

and the column vectors of

As XΩHBX=[Im,O] holds for the B-orthonormality of the eigenvectors, we have

We now give a link between the coefficient matrices of (2.3) and their splittings.

Let B be a Hermitian positive semidefinite matrix and S be defined as in (2.2) and

for k,ℓ=0,1,…,M−1. Because Theorem 2.1 holds irrespective of the scalar multiples of the eigenvectors involved in the columns of V, (2.41) holds. ∎

Thanks to Theorem 2.2, we enclose M(N)k+ℓ+1,in instead of Mk+ℓ+1 for k, ℓ=0, 1, …, M−1. From the splitting (2.29), M(N)k+ℓ+1,out can be regarded as the truncated error for quadrature. Denote the quantity obtained by numerically computing M(N)k by ~M(N)k. Hereafter, we denote a numerically computed quantity that may suffer from rounding errors with a tilde.

Denote the interval matrix with radius R∈RL×L+ and center at C∈RL×L by ⟨C,R⟩. Then, the enclosure of M(N)k,in is given by

Theorem 2.3 implies that to enclose M(N)k,in, we can use |M(N)k,out| and the truncated complex moment M(N)k computed by using standard verification methods using interval arithmetic to obtain an enclosure of the truncation error |M(N)k−~M(N)k|. Theorem 2.3 readily gives the following enclosure:

An enclosure of |M(N)k,out| is obtained as follows.

Let Vi=VHBxixHiBV. Then, applying the triangular inequality, we have

for k=0,1,…,2M−1. Noting the geometric series and applying the triangular inequality, we obtain

Because each eigencomponent of each column vector of V′ is a scalar multiple of that of V, R(S(N)k)=R(S(N)k,in) ∎

Motivated by this theorem, we focus on verifying S(N)in, instead of S.

Then, we have the following enclosure of the approximated transformation matrix:

The proof is given similarly to that of Theorem 2.3. ∎

Similarly to the proof of Theorem 2.4, we have

The evaluations (2.63), (2.64) can also be used for the Hankel matrix approach [6] for the evaluation of eigenvectors.

has been heuristically determined in the complex moment eivensolvers for numerical computations. For numerical verification, a reasonable number

N can be determined according to the quadrature error. The error bounds (2.50) and (2.64) can be used to determine a reasonable number of quadrature points. The least number of N such that