Many modern sequence alignment tools implement fast string matching using the space efficient data structure called FM-index. The succinct nature of this data structure presents unique challenges for the algorithm designers. In this paper, we explore the opportunities for parallelization of the exact and inexact matches and present an efficient SIMD solution for the Occ portion of the algorithm. Our implementation computes all eight Occ values required for the inexact match algorithm step in a single pass. We showcase the algorithm performance in a multi-core genome aligner and discuss effects of the memory prefetch. 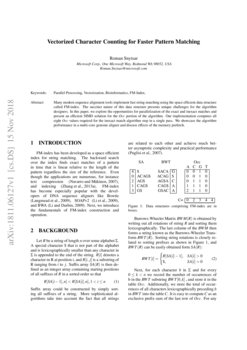 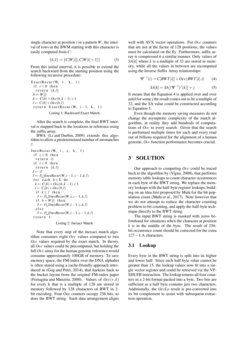 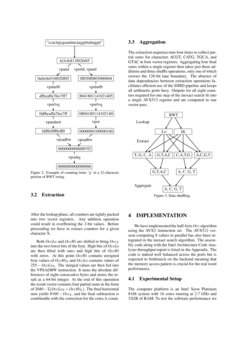 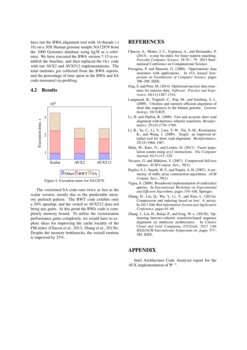 An Efficient Implementation of Manacher's Algorithm

Manacher's algorithm has been shown to be optimal to the longest palindr...
Shoupu Wan, et al. ∙

Due to the increased availability of large datasets of biological sequen...
F. Garofalo, et al. ∙

SOPanG 2: online searching over a pan-genome without false positives

The pan-genome can be stored as elastic-degenerate (ED) string, a recent...
Aleksander Cisłak, et al. ∙

Periodicity in Data Streams with Wildcards

We investigate the problem of detecting periodic trends within a string ...
Funda Ergun, et al. ∙

FM-index has been developed as a space efficient index for string matching. The backward search over the index finds exact matches of a pattern in time that is linear relative to the length of the pattern regardless the size of the reference. Even though the applications are numerous, for instance text compression [Navarro07], and indexing [Zhang13], FM-index has become especially popular with the developers of DNA sequence aligners like Bowtie [Langmead09], SOAPv2 [Soap09], and BWA [Li09]. Next, we introduce the fundamentals of FM-index construction and operation.

Let R be a string of length n over some alphabet Σ. A special character $ that is not part of the alphabet and is lexicographically smaller than any character in Σ is appended to the end of the string. R[i] denotes a character in R at position i, and R[i,j] is a substring of R ranging from i to j. Suffix array SA(R) is then defined as an integer array containing starting positions of all suffixes of R in a sorted order so that

Suffix array could be constructed by simply sorting all suffixes of a string. More sophisticated algorithms take into account the fact that all strings are related to each other and achieve much better asymptotic complexity and practical performance [Puglisi07].

Burrows-Wheeler Matrix BWM(R) is obtained by writing out all rotations of string R and sorting them lexicographically. The last column of the BWM then forms a string known as the Burrows-Wheeler Transform BWT(R). Sorting string rotations is closely related to sorting prefixes as shown in Figure 1, and BWT(R) can be easily obtained form SA(R):

Next, for each character b in Σ and for every 0≤k<n we record the number of occurrences of b in the BWT substring BWT[0,k] , and store it in the table Occ. Additionally, we store the total of occurrences of all characters lexicographically preceding b in BWT into the table C. It is easy to compute C as an exclusive prefix sum of the last row of Occ. For any single character at position i in a pattern W, the interval of rows in the BWM starting with this character is easily computed from C:

From this initial interval, it is possible to extend the search backward from the starting position using the following recursive procedure:

After the search is complete, the final BWT interval is mapped back to the locations in reference using the suffix array.

BWA [Li09] extends this algorithm to allow a predetermined number of mismatches z:

Note that every step of the inexact match algorithm consumes eight Occ values compared to two Occ values required by the exact match. In theory, all Occ values could be precomputed, but holding the full Occ array for the human genome reference would consume approximately 100GB of memory. To save memory space, the FM-index over the DNA alphabet is often stored using a cache-friendly approach introduced in [Gog14], that harkens back to the bucket layout from the original FM-index paper [Ferragina00]. Values of Occ(∗,k) for every k that is a multiple of 128 are stored in memory followed by 128 characters of BWT in 2-bit encoding. Four Occ counters occupy 256 bits, as does the BWT string. Such data arrangement aligns well with AVX vector operations. For Occ counters that are not at the factor of 128 positions, the values must be calculated on the fly. Furthermore, suffix array is compressed it a similar manner. Only values of SA[k] where k is a multiple of 32 are stored in memory, while all the values in between are recomputed using the Inverse Suffix Array relationships:

It means that the Equation 4 is applied over and over until for some j the result comes out to be a multiple of 32, and the SA value could be constructed according to Equation 5.

Even though the memory saving measures do not change the asymptotic complexity of the match algorithm, in reality they add hundreds of computations of Occ to every search. Given that the search is performed multiple times for each and every read out of billions required for the alignment of a human genome, Occ function performance becomes crucial.

Our approach to computing Occ could be traced back to the algorithm by [Vigna08], that performs memory table lookups to count character occurrences in each byte of the BWT string. We replace the memory lookups with the half-byte register lookups, building on an idea first proposed by Mula for the bit population count [Mula17]. Note however that we do not attempt to reduce the character counting problem to bit counting, and apply the half-byte technique directly to the BWT string.

The input BWT string is masked with zeros beforehand for situations when the character at position k is in the middle of the byte. The result of 256-bit occurrence count should be corrected for the extra 127−k A characters.

Every byte in the BWT string is split into its higher and lower half. Since each half byte value cannot be greater than 15, the lookup values now fit into a single vector register and could be retrieved via the VPSHUFB instruction. The lookup returns all four counters in a 2-bit format packed into a byte. Two bits are sufficient as a half byte contains just two characters. Additionally, the OccLo result is pre-converted into its bit complement to assist with subsequent extraction operation.

After the lookup phase, all counters are tightly packed into two vector registers. Any addition operation could result in overflowing the 2-bit values. Before proceeding we have to extract counters for a given character X.

Both OccLo and OccHi are shifted to bring OccX into the two lower bits of the byte. High bits of OccLo are then filled with ones and high bits of OccHi – with zeros. At this point OccHi contains unsigned byte values of OccHiX and OccLo contains values of 255−OccLoX. The merged values are then fed into the VPSADBW instruction. It sums the absolute differences of eight consecutive bytes and stores the result as a 64-bit integer. At the end of this operation the result vector contains four partial sums in the form of 2040−Σ(OccLoX+OccHiX). The final horizontal sum yields 8160−OccX, and the final subtraction is combinable with the correction for the extra A count.

The extraction sequence runs four times to collect partial sums for characters ACGT, CATG, TGCA, and GTAC in four vector registers. Aggregating four final sums within a single register then takes just three additions and three shuffle operations, only one of which crosses the 128-bit lane boundary. The absence of data dependencies between extraction operations facilitates efficient use of the SIMD pipeline and keeps all arithmetic ports busy. Outputs for all eight counters required for one step of the inexact search fit into a single AVX512 register and are computed in one vector pass.

We have implemented the half-byte Occ algorithm using the AVX2 instruction set. The AVX512 version computing 8 values in parallel has also been integrated in the inexact search algorithm. The assembly code along with the Intel Architecture Code Analyzer throughput report is listed in the Appendix. The code is indeed well balanced across the ports but is expected to bottleneck on the backend meaning that the memory access pattern is crucial for the real word performance.

The computer platform is an Intel Xeon Platinum 8168 system with 16 cores running at 2.7 GHz and 32GB of RAM. To test the software performance we have run the BWA alignment tool with 16 threads (-t 16) on a 30X Human genome sample NA12878 from the 1000 Genomes database using hg38 as a reference. We have executed the BWA version 7.15 to establish the baseline, and then replaced the Occ code with our AVX2 and AVX512 implementations. The total runtimes got collected from the BWA reports, and the percentage of time spent in the BWA and SA code measured via profiling.