In this paper, we propose a novel representation for text documents based on aggregating word embedding vectors into document embeddings. Our approach is inspired by the Vector of Locally-Aggregated Descriptors used for image representation, and it works as follows. First, the word embeddings gathered from a collection of documents are clustered by k-means in order to learn a codebook of semnatically-related word embeddings. Each word embedding is then associated to its nearest cluster centroid (codeword). The Vector of Locally-Aggregated Word Embeddings (VLAWE) representation of a document is then computed by accumulating the differences between each codeword vector and each word vector (from the document) associated to the respective codeword. We plug the VLAWE representation, which is learned in an unsupervised manner, into a classifier and show that it is useful for a diverse set of text classification tasks. We compare our approach with a broad range of recent state-of-the-art methods, demonstrating the effectiveness of our approach. Furthermore, we obtain a considerable improvement on the Movie Review data set, reporting an accuracy of 93.3 state-of-the-art approach. 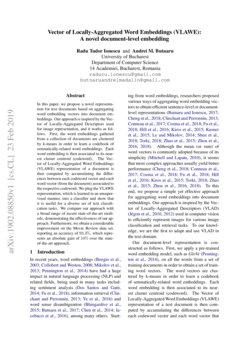 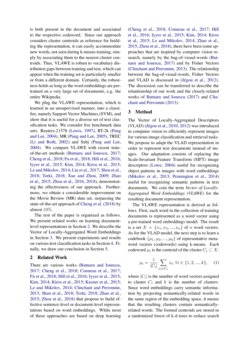 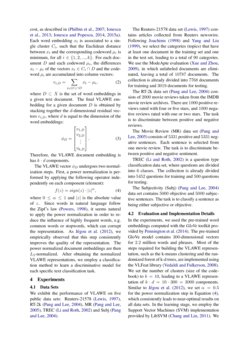 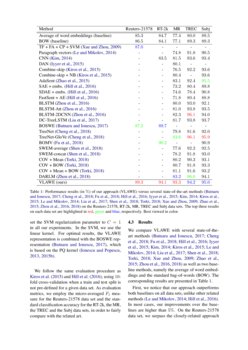 In this paper, we propose a novel representation for text documents base...
Radu Tudor Ionescu, et al. ∙

From Image to Text Classification: A Novel Approach based on Clustering Word Embeddings

In this paper, we propose a novel approach for text classification based...
Andrei M. Butnaru, et al. ∙

A network embedding consists of a vector representation for each node in...
Shudan Zhong, et al. ∙

Since the amount of information on the internet is growing rapidly, it i...
Kamal Al-Sabahi, et al. ∙

have had a huge impact in natural language processing (NLP) and related fields, being used in many tasks including sentiment analysis

used in computer vision to efficiently represent images for various image classification and retrieval tasks. To our knowledge, we are the first to adapt and use VLAD in the text domain.

Our document-level representation is constructed as follows. First, we apply a pre-trained word embedding model, such as GloVe Pennington et al. (2014), on all the words from a set of training documents in order to obtain a set of training word vectors. The word vectors are clustered by k-means in order to learn a codebook of semnatically-related word embeddings. Each word embedding is then associated to its nearest cluster centroid (codeword). The Vector of Locally-Aggregated Word Embeddings (VLAWE) representation of a text document is then computed by accumulating the differences between each codeword vector and each word vector that is both present in the document and associated to the respective codeword. Since our approach considers cluster centroids as reference for building the representation, it can easily accommodate new words, not seen during k-means training, simply by associating them to the nearest cluster centroids. Thus, VLAWE is robust to vocabulary distribution gaps between training and test, which can appear when the training set is particularly smaller or from a different domain. Certainly, the robustness holds as long as the word embeddings are pre-trained on a very large set of documents, e.g. the entire Wikipedia.

We plug the VLAWE representation, which is learned in an unsupervised manner, into a classifier, namely Support Vector Machines (SVM), and show that it is useful for a diverse set of text classification tasks. We consider five benchmark data sets: Reuters-21578

The rest of the paper is organized as follows. We present related works on learning document-level representations in Section 2. We describe the Vector of Locally-Aggregated Word Embeddings in Section 3. We present experiments and results on various text classification tasks in Section 4. Finally, we draw our conclusion in Section 5.

that propose to build effective sentence-level or document-level representations based on word embeddings. While most of these approaches are based on deep learning

The VLAWE representation is derived as follows. First, each word in the collection of training documents is represented as a word vector using a pre-trained word embeddings model. The result is a set X={x1,x2,...,xn} of n word vectors. As for the VLAD model, the next step is to learn a codebook {μ1,μ2,...,μk} of representative meta-word vectors (codewords) using k-means. Each codeword μi is the centroid of the cluster Ci⊂X:

Philbin et al. (2007); Ionescu et al. (2013); Ionescu and Popescu (2014, 2015a). Each word embedding xt is associated to a single cluster Ci, such that the Euclidean distance between xt and the corresponding codeword μi is minimum, for all i∈{1,2,...,k}. For each document D and each codeword μi, the differences xt−μi of the vectors xt∈Ci∩D and the codeword μi are accumulated into column vectors:

where D⊂X is the set of word embeddings in a given text document. The final VLAWE embedding for a given document D is obtained by stacking together the d-dimensional residual vectors vi,D, where d is equal to the dimension of the word embeddings:

where 0≤α≤1 and |z| is the absolute value of z. Since words in natural language follow the Zipf’s law Powers (1998), it seems natural to apply the power normalization in order to reduce the influence of highly frequent words, e.g. common words or stopwords, which can corrupt the representation. As Jegou-PAMI-2012, we empirically observed that this step consistently improves the quality of the representation. The power normalized document embeddings are then L2-normalized. After obtaining the normalized VLAWE representations, we employ a classification method to learn a discriminative model for each specific text classification task.

The Reuters-21578 data set Lewis (1997) contains articles collected from Reuters newswire. Following Joachims-ECML-1998 and Yang-SIGIR-1999, we select the categories (topics) that have at least one document in the training set and one in the test set, leading to a total of 90 categories. We use the ModeApte evaluation Xue and Zhou (2009), in which unlabeled documents are eliminated, leaving a total of 10787 documents. The collection is already divided into 7768 documents for training and 3019 documents for testing.

The Movie Review (MR) data set Pang and Lee (2005) consists of 5331 positive and 5331 negative sentences. Each sentence is selected from one movie review. The task is to discriminate between positive and negative sentiment.

The Subjectivity (Subj) Pang and Lee (2004) data set contains 5000 objective and 5000 subjective sentences. The task is to classify a sentence as being either subjective or objective.

In the experiments, we used the pre-trained word embeddings computed with the GloVe toolkit provided by Pennington-EMNLP-2014. The pre-trained GloVe model contains 300-dimensional vectors for 2.2 million words and phrases. Most of the steps required for building the VLAWE representation, such as the k-means clustering and the randomized forest of k-d trees, are implemented using the VLFeat library Vedaldi and Fulkerson (2008). We set the number of clusters (size of the codebook) to k=10, leading to a VLAWE representation of k⋅d=10⋅300=3000 components. Similar to Jegou-PAMI-2012, we set α=0.5 for the power normalization step in Equation (4), which consistently leads to near-optimal results on all data sets. In the learning stage, we employ the Support Vector Machines (SVM) implementation provided by LibSVM Chang and Lin (2011). We set the SVM regularization parameter to C=1 in all our experiments. In the SVM, we use the linear kernel. For optimal results, the VLAWE representation is combined with the BOSWE representation Butnaru and Ionescu (2017), which is based on the PQ kernel Ionescu and Popescu (2013, 2015b).

We follow the same evaluation procedure as Kiros-NIPS-2015 and Hill-NAACL-2016, using 10

-fold cross-validation when a train and test split is not pre-defined for a given data set. As evaluation metrics, we employ the micro-averaged

F1 measure for the Reuters-21578 data set and the standard classification accuracy for the RT-2k, the MR, the TREC and the Subj data sets, in order to fairly compare with the related art.

First, we notice that our approach outperforms both baselines on all data sets, unlike other related methods Le and Mikolov (2014); Hill et al. (2016). In most cases, our improvements over the baselines are higher than 5%. On the Reuters-21578 data set, we surpass the closely-related approach of Ionescu-KES-2017 by around 2%. On the RT-2k data set, we surpass the related works of Fu-ESA-2018 and Ionescu-KES-2017 by around 4%. To our knowledge, our accuracy of 94.1% on RT-2k Pang and Lee (2004) surpasses all previous results reported in literature. On the MR data set, we surpass most related works by more than 10%. To our knowledge, the best accuracy on MR reported in previous literature is 83.6%, and it is obtained by Cheng-IJCAI-2018. We surpass the accuracy of Cheng-IJCAI-2018 by almost 10%, reaching an accuracy of 93.3% using VLAWE. On the TREC data set, we reach the third best performance, after methods such as Cheng et al. (2018); Zhou et al. (2016, 2018). Our performance on TREC is about 2% lower than the state-of-the-art accuracy of 96.1%. On the Subj data set, we obtain an accuracy of 95.0%. There are two state-of-the-art methods Cheng et al. (2018); Zhao et al. (2015) reporting better performance on Subj. Compared to the best one of them Cheng et al. (2018), our accuracy is 1% lower. Overall, we consider that our results are noteworthy.

The k-means clustering algorithm and, on some data sets, the cross-validation procedure can induce accuracy variations due to the random choices involved. We have conducted experiments to determine how large are the accuracy variations. We observed that the accuracy can decrease by up to 1%, which does not bring any significant differences to the results reported in Table 1.

In Figure 1, we illustrate the performance variation on MR, when using different values for k. We notice that the accuracy tends to increase slightly, as we increase the number of clusters from 2 to 30. Overall, the VLAWE representation seems to be robust to the choice of k, always surpassing the state-of-the-art approach Cheng et al. (2018).

We proposed a novel representation for text documents which is based on aggregating word embeddings using k-means and on computing the residuals between each word embedding allocated to a given cluster and the corresponding cluster centroid. Our experiments on five benchmark data sets prove that our approach yields competitive results with respect to the state-of-the-art methods.

We thank the reviewers for their useful comments. This research is supported by University of Bucharest, Faculty of Mathematics and Computer Science, through the 2019 Mobility Fund.