Singing voice conversion aims to convert singer's voice from source to target without changing singing content. Parallel training data is typically required for the training of singing voice conversion system, that is however not practical in real-life applications. Recent encoder-decoder structures, such as variational autoencoding Wasserstein generative adversarial network (VAW-GAN), provide an effective way to learn a mapping through non-parallel training data. In this paper, we propose a singing voice conversion framework that is based on VAW-GAN. We train an encoder to disentangle singer identity and singing prosody (F0 contour) from phonetic content. By conditioning on singer identity and F0, the decoder generates output spectral features with unseen target singer identity, and improves the F0 rendering. Experimental results show that the proposed framework achieves better performance than the baseline frameworks. 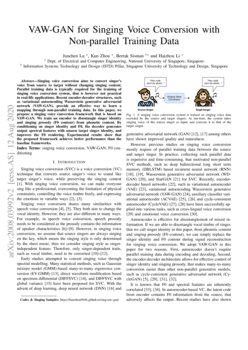 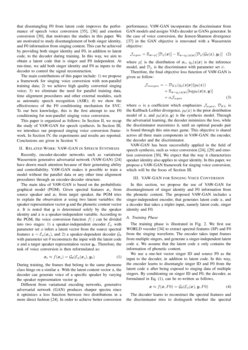 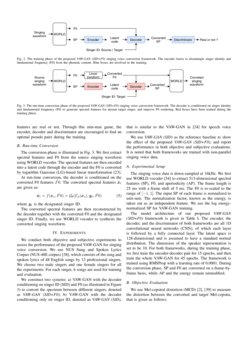 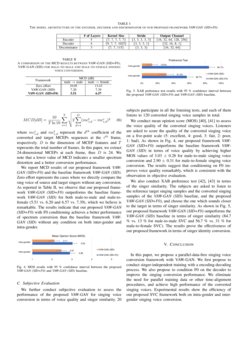 Voice conversion is to generate a new speech with the source content and...
Jian Ma, et al. ∙

Have you ever wondered how a song might sound if performed by a differen...
Rema Daher, et al. ∙

Singing voice conversion shares many similarities with speech voice conversion [4, 5]. They both aim to change the vocal identity. However, they are also different in many ways. For example, in speech voice conversion, speech prosody needs to be considered as the prosody contains the information of speaker characteristics [6, 7, 8, 9]. However, in singing voice conversion, we assume that source singers are always singing on the key, which means the singing style is only determined by the sheet music, thus we consider singing style as singer-independent feature. Therefore, only singer-dependent traits, such as vocal timbre, need to be converted [10, 11, 12].

, and DIFFSVC with global variance

have been proposed for SVC. With the advent of deep learning, deep neural network (DNN)

[16] and generative adversarial network (GAN) [12, 17] among others have shown improved quality and naturalness.

Autoencoder is effective for disentanglement of mixed information. If we are able to disentangle vocal timbre of singer, that we call singer identity in this paper, from phonetic content and singing prosody (F0 contour), we can simply replace the singer identity and F0 contour during signal reconstruction for singing voice conversion. We adopt VAW-GAN in this paper for two reasons. First, autoencoder doesn’t require parallel training data during encoding and decoding; Second, the encoder-decoder architecture allows for effective control of singer identity and singing prosody, that makes many-to-many conversion easier than other non-parallel generative models, such as cycle-consistent generative adversarial network (CycleGAN) [29, 31, 5, 32].

It is known that F0 and spectral features are inherently correlated [33, 34]. In autoencoder-based VC, the latent code from encoder contains F0 information from the source, that adversely affects the output. Recent studies have also shown that disentangling F0 from latent code improves the performance of speech voice conversion [35, 36] and emotion conversion [30], that motivates the studies in this paper. We are motivated to study disentanglement of both singer identity, and F0 information from singing content. This can be achieved by providing both singer identity and F0, in addition to latent code, to the decoder during training. In this way, we aim to obtain a latent code that is singer and F0 independent. At run-time, we add both singer identity and F0 as inputs to the decoder to control the signal reconstruction.

The main contributions of this paper include: 1) we propose a framework for singing voice conversion with non-parallel training data; 2) we achieve high quality converted singing voice; 3) we eliminate the need for parallel training data, time alignment procedures and other external modules, such as automatic speech recognition (ASR); 4) we show the effectiveness of the F0 conditioning mechanism for SVC. To our best knowledge, this is the first attempt to use F0 conditioning for non-parallel singing voice conversion.

This paper is organized as follows: In Section II, we recap the study of VAW-GAN for speech synthesis. In Section III, we introduce our proposed singing voice conversion framework. In Section IV, the experiments and results are reported. Conclusions are given in Section V.

Recently, encoder-decoder networks such as variational Wasserstein generative adversarial network (VAW-GAN) [24] have drawn much attention because of their generating ability and controllability. VAW-GAN makes it possible to train a model without the parallel data or any other time alignment procedures through an encoder-decoder structure.

The main idea of VAW-GAN is based on the probabilistic graphical model (PGM). Given spectral features xs from source speaker and xt from target speaker, the PGM tries to explain the observation x

y and the phonetic content vector z. It is noted that y is determined solely by the speaker identity and z is a speaker-independent variable. According to the PGM, the voice conversion function f(⋅) can be divided into two stages: 1) a speaker-independent encoder Eϕ with parameter set ϕ infers a latent vector from the source spectral features z=Eϕ(xs), and 2) a speaker-dependent decoder Gθ with parameter set θ reconstructs the input with the latent code z and a target speaker representation vector yt. Therefore, the task of voice conversion is then reformulated as:

During training, the frames that belong to the same phoneme class hinge on a similar z. With the latent content vector z, the decoder can generate voice of a specific speaker by varying the speaker representation vector y.

[24]. In order to achieve better conversion performance, VAW-GAN incorporates the discriminator from GAN models and assigns VAE’s decoder as GAN’s generator. In the case of voice conversion, the Jensen-Shannon divergence [37] in the GAN objective is renovated with a Wasserstein objective:

where p∗t is the distribution of xt, qϕ(z|x) is the inference model, and Dψ is the discriminator with parameter set ψ.

Therefore, the final objective loss function of VAW-GAN is given as follow:

where α is a coefficient which emphasizes Jwgan, DKL

is the Kullback-Leibler divergence,

pθ(z) is the prior distribution model of z, and pθ(x|z,y) is the synthesis model. Through the adversarial learning, the decoder minimizes the loss, while the discriminator maximizes it, until an optimal pseudo pair is found through this min-max game. This objective is shared across all three main components in VAW-GAN: the encoder, the decoder and the discriminator.

VAW-GAN has been successfully applied in the field of speech synthesis, such as voice conversion [24, 29] and emotion conversion [30]. We expect that the way it characterizes speaker identity also applies to singer identity. In this paper, we propose a VAW-GAN framework for singing voice conversion, which will be the focus of Section III.

The training phase is illustrated in Fig. 2. We first use WORLD vocoder [34] to extract spectral features (SP) and F0 from the singing waveform. The encoder takes input frames from multiple singers, and generate a singer-independent latent code z. We assume that the latent code z only contains the information of phonetic content.

The conversion phase is illustrated in Fig. 3

. We first extract spectral features and F0 from the source singing waveform using WORLD vocoder. The spectral features are then encoded into a latent code through the encoder and the F0 is converted by logarithm Gaussian (LG)-based linear transformation

At run-time conversion, the decoder is conditioned on the converted F0 features ^F0. The converted spectral features ^xt are given as:

where yt is the designated singer ID.

The converted spectral features are then reconstructed by the decoder together with the converted F0 and the designated singer ID. Finally, we use WORLD vocoder to synthesis the converted singing waveform.

We conduct both objective and subjective experiments to assess the performance of the proposed VAW-GAN for singing voice conversion. We use NUS Sung and Spoken Lyrics Corpus (NUS-48E corpus) [38], which consists of the sung and spoken lyrics of 48 English songs by 12 professional singers. We choose two male singers and one female singers for all the experiments. For each singer, 6 songs are used for training and evaluation.

We construct two systems: a) VAW-GAN with the decoder conditioning on singer ID (SID) and F0 (as illustrated in Figure 3) to convert the spectrum between different singers, denoted as VAW-GAN (SID+F0); b) VAW-GAN with the decoder conditioning only on singer ID, denoted as VAW-GAN (SID), that is similar to the VAW-GAN in [24] for speech voice conversion.

We use VAW-GAN (SID) as the reference baseline to show the effect of the proposed VAW-GAN (SID+F0), and report the performance in both objective and subjective evaluations. It is noted that both frameworks are trained with non-parallel singing voice data.

The singing voice data is down-sampled at 16kHz. We first use WORLD vocoder [34] to extract 513-dimensional spectral features (SP), F0, and aperiodicity (AP). The frame length is 25 ms with a frame shift of 5 ms. The F0 is re-scaled to the range of [−1,1]. The input SP of each frame is normalized to unit-sum. The normalization factor, known as the energy, is taken out as an independent feature. We use the log energy-normalized SP for VAW-GAN training.

. The encoder, the decoder, and the discriminator of both frameworks are all 1D convolutional neural networks (CNN), of which each layer is followed by a fully connected layer. The latent space is 128-dimensional and is assumed to have a standard normal distribution. The dimension of the speaker representation is set to be 10. For both frameworks, during the training phase, we first train the encoder-decoder pair for 15 epochs, and then train the whole VAW-GAN for 45 epochs. The framework is trained using RMSProp with a learning rate of 0.0001. During the conversion phase, SP and F0 are converted on a frame-by-frame basis, while AP and the energy remain unmodified.

We use Mel-cepstral distortion (MCD) [39, 2] to measure the distortion between the converted and target Mel-cepstra, that is given as follows:

where mcci,d and mcti,d represent the dth coefficient of the converted and target MCEPs sequences at the ith frame, respectively. D is the dimension of MCEP features and T represents the total number of frames. In this paper, we extract 24-dimensional MCEPs at each frame, thus D is 24. We note that a lower value of MCD indicates a smaller spectrum distortion and a better conversion performance.

We further conduct subjective evaluation to assess the performance of the proposed VAW-GAN for singing voice conversion in terms of voice quality and singer similarity. 20 subjects participate in all the listening tests, and each of them listens to 120 converted singing voice samples in total.

We conduct mean opinion score (MOS) [40, 41] to assess the voice quality of the converted singing voices. Listeners are asked to score the quality of the converted singing voice on a five-point scale (5: excellent, 4: good, 3: fair, 2: poor, 1: bad). As shown in Fig. 4, our proposed framework VAW-GAN (SID+F0) outperforms the baseline framework VAW-GAN (SID) in terms of voice quality by achieving higher MOS values of 3.03 ± 0.28 for male-to-male singing voice conversion and 2.90 ± 0.31 for male-to-female singing voice conversion. The results suggest that conditioning on F0 improves voice quality remarkably, which is consistent with the observation in objective evaluation.

In this paper, we propose a parallel-data-free singing voice conversion framework with VAW-GAN. We first propose to conduct singer-independent training with a encoding-decoding process. We also propose to condition F0 on the decoder to improve the singing conversion performance. We eliminate the need for parallel training data or other time-alignment procedures, and achieve high performance of the converted singing voices. Experimental results show the efficiency of our proposed SVC framework both on intra-gender and inter-gender singing voice conversion.