This paper considers the problem of computing Bayesian estimates of both states and model parameters for nonlinear state-space models. Generally, this problem does not have a tractable solution and approximations must be utilised. In this work, a variational approach is used to provide an assumed density which approximates the desired, intractable, distribution. The approach is deterministic and results in an optimisation problem of a standard form. Due to the parametrisation of the assumed density selected first- and second-order derivatives are readily available which allows for efficient solutions. The proposed method is compared against state-of-the-art Hamiltonian Monte Carlo in two numerical examples. 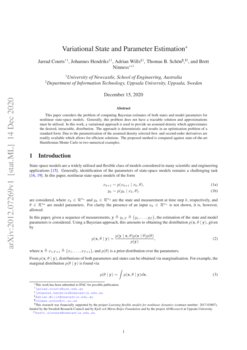 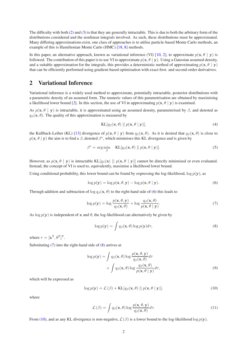 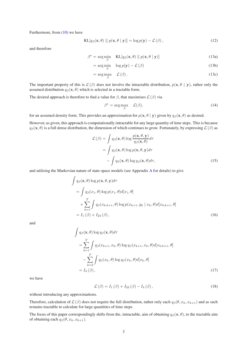 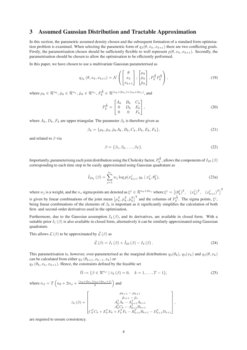 Self-learning eigenstates with a quantum processor

The Mixture of Markov Jump Processes: Monte Carlo Method and the EM Estimation

are considered, where xk∈Rnx and yk∈Rny are the state and measurement at time step k, respectively, and θ∈Rnθ are model parameters. For clarity the presence of an input uk∈Rnu is not shown, it is, however, allowed.

In this paper, given a sequence of measurements, y≜y1:T≜{y1,…,yT}, the estimation of the state and model parameters is considered. Using a Bayesian approach, this amounts to obtaining the distribution p(x,θ∣y), given by

From p(x,θ∣y), distributions of both parameters and states can be obtained via marginalisation. For example, the marginal distribution p(θ∣y) is found via

The difficulty with both (2) and (3) is that they are generally intractable. This is due to both the arbitrary form of the distributions considered and the nonlinear integrals involved. As such, these distributions must be approximated. Many differing approximations exist, one class of approaches is to utilise particle-based Monte Carlo methods, an example of this is Hamiltonian Monte Carlo (HMC) [18, 8] methods.

In this paper, an alternative approach, known as variational inference (VI) [10, 2], to approximate p(x,θ∣y) is followed. The contribution of this paper is to use VI to approximate p(x,θ∣y). Using a Gaussian assumed density, and a suitable approximation for the integrals, this provides a deterministic method of approximating p(x,θ∣y) that can be efficiently performed using gradient-based optimisation with exact first- and second-order derivatives.

Variational inference is a widely used method to approximate, potentially intractable, posterior distributions with a parametric density of an assumed form. The numeric values of this parametrisation are obtained by maximising a likelihood lower bound [2]. In this section, the use of VI in approximating p(x,θ∣y) is examined.

As p(x,θ∣y) is intractable, it is approximated using an assumed density, parameterised by β, and denoted as qβ(x,θ). The quality of this approximation is measured by

the Kullback-Leiber (KL) [13] divergence of p(x,θ∣y) from qβ(x,θ). As it is desired that qβ(x,θ) is close to p(x,θ∣y) the aim is to find a β, denoted β⋆, which minimises this KL divergence and is given by

However, as p(x,θ∣y) is intractable KL[qβ(x)∣∣p(x,θ∣y)] cannot be directly minimised or even evaluated. Instead, the concept of VI is used to, equivalently, maximise a likelihood lower bound.

Using conditional probability, this lower bound can be found by expressing the log-likelihood,

Through addition and subtraction of logqβ(x,θ) to the right-hand side of (6) this leads to

As logp(y) is independent of x and θ, the log-likelihood can alternatively be given by

Substituting (7) into the right-hand side of (8) arrives at

which will be expressed as

From (10), and as any KL divergence is non-negative, L(β) is a lower bound to the log-likelihood logp(y).

Furthermore, from (10) we have

The important property of this is L(β) does not involve the intractable distribution, p(x,θ∣y), rather only the assumed distribution qβ(x,θ) which is selected in a tractable form.

The desired approach is therefore to find a value for β, that maximises L(β) via

for an assumed density form. This provides an approximation for p(x,θ∣y) given by qβ(x,θ) as desired.

However, as given, this approach is computationally intractable for any large quantity of time steps. This is because qβ(x,θ) is a full dense distribution, the dimension of which continues to grow. Fortunately, by expressing L(β) as

without introducing any approximations.

Therefore, calculation of L(β) does not require the full distribution, rather only each qβ(θ,xk,xk+1) and as such remains tractable to calculate for large quantities of time steps.

In this paper, we have chosen to use a multivariate Gaussian parameterised as

where Ak,Dk,Fk are upper triangular. The parameter βk is therefore given as

and related to β via

P12k, allows the components of I23(β) corresponding to each time step to be easily approximated using Gaussian quadrature as

where wj is a weight, and the ns sigma points are denoted as ξj∈Rnθ+2nx where ξj=[(θjk)T,(xjk)T,(xjk+1)T]T is given by linear combinations of the joint mean [μTk,¯μTk,~μTk]T and the columns of PT2k. The sigma points, ξj, being linear combinations of the elements of βk is important as it significantly simplifies the calculation of both first- and second-order derivatives used in the optimisation.

are required to ensure consistency.

However, as each Ak, being a Cholesky factor of a covariance matrix, is non-singular the constraints set can be simplified to

Using this, an approximation of (14) is given by

This constrained optimisation problem is of a standard form and can be efficiently solved using exact first- and second-order derivatives without more approximations to find a local maximum. The calculation of derivatives required can be performed using automatic differentiation [7] without manual effort. Due to the parametrisation chosen, this can be efficiently performed using standard tools. For the numerical examples provided CasADi [1] has been used.

The result of this optimisation is numerical values for each

which approximates each p(θ,xk,xk+1∣y). Due to the Gaussian form selected, marginal and conditional distributions of both the parameters and states can be readily extracted as desired.

The proposed approach is summarised in Algorithm 1.

In this section, we provide two numerical examples of the proposed approach and compare the results against HMC. The HMC results have been calculating using STAN [3] as detailed in [8].

In this example, estimation of θ=[a,b,log(√c)] for the following stochastic volatility model:

For the proposed method fifth-order cubature [9] is used to perform the Gaussian quadrature approximations and the optimisation routine is run until convergence to a locally optimal point requiring 17.6s. The HMC results are obtained using 8×103 iterations with half discarded at warm-up requiring 87.0s.

Despite this the state distributions obtained using both methods closely match. Figure 2 highlights this for three differing time steps, which are representative of the results for other time steps.

In this example, the proposed method is demonstrated on a nonlinear and non-Gaussian example and is, generally, representative of the results obtained using HMC at a lower computational cost. This, however, comes with a trade-off, when the underlying distribution is non-Gaussian, the Gaussian assumption of the proposed method may produce overconfident results as shown for the distribution of log(√c).

In this section, the proposed method is applied to a rotational inverted pendulum, or Furata pendulum [6]

ϕ=[Jr,Jp,Km,Rm,Dp,Dr]T, and a seven dimensional covariance matrix Π associated with coupled additive Gaussian noise of the process and measurement models is considered using 375 measurements. For further details of the model refer to Appendix B.

For the proposed approach, a third order unscented-transform [11, 23] with α=1, κ=0, and β=0 is used to perform the Gaussian quadrature required. A point estimate for Π is also considered, this highlights the flexibility of the proposed approach which allows for distributions of subsets of parameters alongside point estimates of others. In this example, we also exploit the additive form of the state-space model, this allows for a Hessian to be efficiently approximated using only Jacobian’s. Identification problems for systems with additive Gaussian noise commonly use this approach [12, 20]. While the calculations for this example are not fully detailed in Section 3, they represent minor modifications of the resultant optimisation problem.

In this paper, a variational based approach to estimating state and parameter distributions is presented for general nonlinear state-space models. The proposed method results in an optimisation problem of a standard form for which, due to the parametrisation selected, derivatives are readily available. While the proposed method assumes a Gaussian density, and is therefore limited compared to more general HMC approaches, the numerical examples illustrate that approximations suitable for many purposes are obtained on both simulated and real data. Compared to state-of-the-art HMC approaches this is achieved at a significantly lower computational cost.

Future research directions for this work include blending the proposed approach with sequential Monte Carlo (SMC) algorithms along the lines of what has been done in e.g. [14, 17]. The motivation for this is to combine the computational efficiency of the proposed method and the theoretical guarantees of SMC to overcome the limitations imposed by the Gaussian assumed densities.

Appendix A Decomposition of L(β)

In this section, the decomposition of L(β) required to express L(β) as pairwise joints distributions, rather than as a full distribution is presented. This utilises the Markovian nature of state-space models in a fashion similar to related system identification approaches such as [21, 4, 20, 22, 5].

Firstly, L(β) is expressed in the form of two integrals as

The first integral is decomposed according to

While the second integral is decomposed according to

Together, this allows L(β) to be calculated without requiring the full distribution, qβ(x,θ), but rather only each qβ(θ,xk,xk+1) using

The state vector used to model the Furata pendulum is x=[ϑα˙ϑ˙α]T, where ϑ and α are the arm and pendulum angles, respectively.

The continuous time dynamics are given by,

The process model used consists of a two-step Euler discretisation of these continuous time dynamics over an 8ms sampling time subsequently disturbed by noise vk.

and it is assumed that