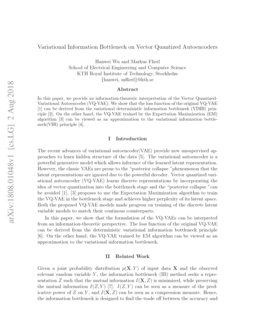 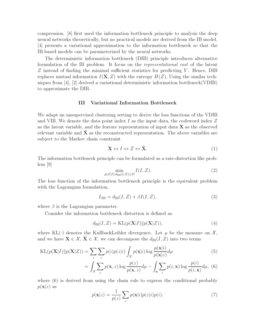 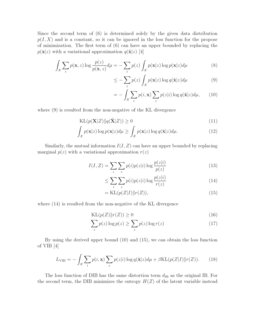 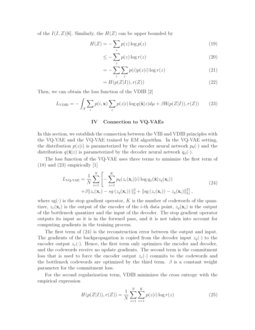 The recent advances of variational autoencoder(VAE) provide new unsupervised approaches to learn hidden structure of the data [5]. The variational autoencoder is a powerful generative model which allows inference of the learned latent representation. However, the classic VAEs are prone to the “posterior collapse ”phenomenon that the latent representations are ignored due to the powerful decoder. Vector quantized variational autoencoder (VQ-VAE) learns discrete representations by incorporating the idea of vector quantization into the bottleneck stage and the “posterior collapse ”can be avoided [1]. [3] proposes to use the Expectation Maximization algorithm to train the VQ-VAE in the bottleneck stage and achieves higher perplexity of its latent space. Both the proposed VQ-VAE models made progress on training of the discrete latent variable models to match their continous counterparts.

Given a joint probability distribution

and the observed relevant random variable

first used the information bottleneck principle to analysis the deep neural networks theoretically, but no practical models are derived from the IB model.

[4] presents a variational approximation to the information bottleneck so that the IB-based models can be parameterized by the neural networks.

The deterministic information bottleneck (DIB) principle introduces alternative formulation of the IB problem. It focus on the representational cost of the latent Z instead of finding the minimal sufficient statistics for predicting Y. Hence, DIB replaces mutual information I(X,Z) with the entropy H(Z), Using the similar techniques from [4], [2] derived a variational deterministic information bottleneck(VDIB) to approximate the DIB.

We adapt an unsupervised clustering setting to derive the loss functions of the VDIB and VIB. We denote the data point index I as the input data, the codeword index Z as the latent variable, and the feature representation of input data X as the observed relevant variable and ^X

as the reconstructed representation. The above variables are subject to the Markov chain constraint

The loss function of the information bottleneck principle is the equivalent problem with the Lagrangian formulation,

where β is the Lagrangian parameter.

Consider the information bottleneck distortion is defined as

μ be the measure on X, and we have X∈X, ^X∈X, we can decompose the dIB(I,Z) into two terms

Since the second term of (6) is determined solely by the given data distribution p(I,X) and is a constant, so it can be ignored in the loss function for the propose of minimization. The first term of (6) can have an upper bounded by replacing the p(x|z) with a variational approximation q(^x|z) [4]

Similarly, the mutual information I(I,Z) can have an upper bounded by replacing marginal p(z) with a variational approximation r(z)

The loss function of DIB has the same distortion term dIB as the original IB. For the second term, the DIB minimizes the entropy H(Z) of the latent variable instead of the I(I,Z)[6]. Similarly, the H(Z) can be upper bounded by

Then, we can obtain the loss function of the VDIB [2]

) is the reconstruction error between the output and input. The gradients of the backpropagation is copied from the decoder input

For the second regularization term, VDIB minimizes the cross entropy with the empirical expression

is set to be a uniform distribution. Then

For the VIB, the KL divergence can be expressed as

The first term of (26) is the cross entropy that the same as (25). However, the conditional entropy H(p(Z|I)) of (26) encourages the input data to be quantized uniformly with more codewords.

where ej,j=1,…,K is the codeword. Hence, the conditional entropy H(p(Z|I) is zero.

On the other hand, the VQ-VAE trained by the EM algorithm uses a soft clustering scheme based on the distance between the codeword and the output of the encoder. The probability the data assigns with the z−th codeword is

That is, the EM algorithm explicitly increases the conditional entropy H(p(Z|I)) and achieve a lower value for (18). The experiments in [3] also suggests that VQ-VAE trained by the EM algorithm can achieve higher perplexity of the codewords than the original VQ-VAE.