Non-negative matrix factorization (NMF) is a knowledge discovery method that is used for many fields, besides, its variational inference and Gibbs sampling method are also well-known. However, the variational approximation accuracy is not yet clarified, since NMF is not statistically regular and the prior used in the variational Bayesian NMF (VBNMF) has zero or divergence points. In this paper, using algebraic geometrical methods, we theoretically analyze the difference of the negative log evidence/marginal likelihood (free energy) between VBNMF and Bayesian NMF, and give a lower bound of the approximation accuracy, asymptotically. The results quantitatively show how well the VBNMF algorithm can approximate Bayesian NMF. 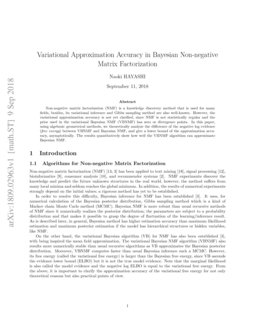 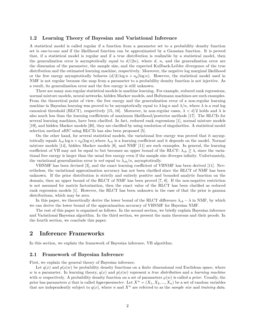 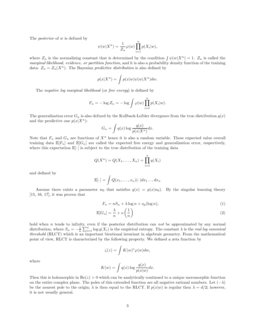 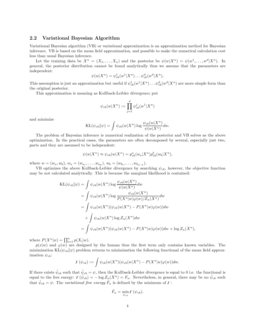 Non-negative matrix factorization (NMF) [16, 4] has been applied to text mining [21], signal processing [14], bioinformatics [11], consumer analysis [12], and recommender systems [3]. NMF experiments discover the knowledge and predict the future unknown structures in the real world, however, the method suffers from many local minima and seldom reaches the global minimum. In addition, the results of numerical experiments strongly depend on the initial values; a rigorous method has yet to be established.

In order to resolve this difficulty, Bayesian inference for NMF has been established

. It uses, for numerical calculation of the Bayesian posterior distribution, Gibbs sampling method which is a kind of Markov chain Monte Carlo method (MCMC). Bayesian NMF is more robust than usual recursive methods of NMF since it numerically realizes the posterior distribution; the parameters are subject to a probability distribution and that makes it possible to grasp the degree of fluctuation of the learning/inference result. As is described later, in general, Bayesian method has higher estimation accuracy than maximum likelihood estimation and maximum posterior estimation if the model has hierarchical structures or hidden variables, like NMF.

, and the generalization error are the dimension of the parameter, the sample size, and the expected Kullback-Leibler divergence of the true distribution and the estimated learning machine, respectively. Moreover, the negative log marginal likelihood or the free energy asymptotically behaves

(d/2)logn+Op(1). However, the statistical model used in NMF is not regular because the map from a parameter to a probability density function is not injective. As a result, its generalization error and the free energy is still unknown.

There are many non-regular statistical models in machine learning. For example, reduced rank regressions, normal mixture models, neural networks, hidden Markov models, and Boltzmann machines are such examples. From the theoretical point of view, the free energy and the generalization error of a non-regular learning machine in Bayesian learning was proved to be asymptotically equal to

λlogn and λ/n, where λ is a real log canonical threshold (RLCT), respectively [18, 19]. Moreover, in non-regular cases, λ<d/2 holds and λ is also much less than the learning coefficients of maximum likelihood/posterior methods [20]. The RLCTs for several learning machines, have been clarified. In fact, reduced rank regressions [1], normal mixture models [22], and hidden Markov models [23], they are clarified by using resolution of singularities. A statistical model selection method sBIC using RLCTs has also been proposed [6].

. However, the RLCT has been unknown in the case of that the prior is gamma distributions, which may be zero.

The rest of this paper is organized as follows. In the second section, we briefly explain Bayesian inference and Variational Bayesian algorithm. In the third section, we present the main theorems and their proofs. In the fourth section, we conclude this paper.

In this section, we explain the framework of Bayesian inference, VB algorithm.

First, we explain the general theory of Bayesian inference.

Let q(x) and p(x|w) be probability density functions on a finite dimensional real Euclidean space, where w is a parameter. In learning theory, q(x) and p(x|w) represent a true distribution and a learning machine with w respectively. A probability density function on a set of parameters φ(w) is called a prior. Usually, the prior has parameters ϕ that is called hyperparameter. Let Xn=(X1,X2,...,Xn)

be a set of random variables that are independently subject to

q(x), where n and Xn are referred to as the sample size and training data. The posterior of w is defined by

where Zn is the normalizing constant that is determined by the condition ∫ψ(w|Xn)=1. Zn is called the marginal likelihood, evidence, or partition function, and it is also a probability density function of the training data: Zn=Zn(Xn). The Bayesian predictive distribution is also defined by

The negative log marginal likelihood (or free energy) is defined by

The generalization error Gn is also defined by the Kullback-Leibler divergence from the true distribution q(x) and the predictive one p(x|Xn):

Note that Fn and Gn are functions of Xn hence it is also a random variable. These expected value overall training data E[Fn] and E[Gn] are called the expected free energy and generalization error, respectively, where this expectation E[⋅] is subject to the true distribution of the training data

hold when n tends to infinity, even if the posterior distribution can not

be approximated by any normal distribution, where

Then this is holomorphic in Re(z)>0 which can be analytically continued to a unique meromorphic function on the entire complex plane [2]. The poles of this extended function are all negative rational numbers. Let (−λ) be the nearest pole to the origin; λ is then equal to the RLCT. The multiplicity m is denoted by the order of the nearest pole. If p(x|w) is regular then λ=d/2; however, it is not usually general.

Let the training data be Xn=(X1,…,Xn) and the posterior be ψ(w|Xn)=ψ(w1,…,wd|Xn). In general, the posterior distribution cannot be found analytically thus we assume that the parameters are independent:

This assumption is just an approximation but useful if ψ1vb(w1|Xn)…ψdvb(wd|Xn) are more simple form than the original posterior.

This approximation is meaning as Kullback-Leibler divergence; put

The problem of Bayesian inference is numerical realization of the posterior and VB solves as the above optimization. In the practical cases, the parameters are often decomposed by several, especially just two, parts and they are assumed to be independent:

VB optimizes the above Kullback-Leibler divergence by searching ψvb, however, the objective function may be not calculated analytically. This is because the marginal likelihood is contained:

p(x|w) and φ(w) are designed by the human thus the first term only contains known variables. The minimization KL(ψvb∥ψ) problem returns to minimization the following functional of the mean field approximation ψvb:

The inequality ¯Fn≧Fn is immediately derived by the definition.

For example, if the approximation

where C1,C2 are the normalizing constants.

In this way, VB is an approximation of Bayesian and its accuracy can be expressed by ¯Fn−Fn≧0, the less the difference is, the more valid the approximation is. From the theoretical point of view, ¯Fn has an asymptotic behavior which is similar to the one of Fn. For example, in VBNMF, the following theorem is proved [13].

Let the likelihood model and the prior be the following Poisson and gamma distributions, respectively:

In this paper, we mathematically show an upper bound ¯λ of the RLCT λ of the NMF in the case that is same as VBNMF; the model is Poisson ditributions and the prior is gamma distributions; the prior may have zero or divergence points in K−1(0). By using the upper bound, we also derive a lower bound of the approximation accuracy of VBNMF.

In this section, we introduce our main results and prove them.

Third, we introduce the main result of this paper. In the followings, w=(U,V) is a parameter and x=X is an observed random variable.

Assume that the largest pole of the function of one complex variable z,

We have already derived an upper bound of the RLCT of NMF in the case that the prior φ(U,V) is strictly positive and bounded [9, 8]. However, to compare with VBNMF, we set the prior as gamma distributions:

In this paper, we prove the following theorems.

If the prior is the above gamma distributions, then the RLCT of NMF λ satisfies the following inequality:

The equality holds when M=N=1.

We prove this theorem in the next section. As two applications of this theorem, we obtain an upper bounds of the free energy and Bayesian generalization error of NMF in this case. The following theorem shows a statistical bound of Bayesian estimation of NMF.

Let the probability density functions of X∈M(M,N,K) be q(X) and p(X|U,V), which represent a true distribution and a learning machine respectively defined by

In Theorem 3.2, we study a case when a set of random matrices Xn=X1,X2,...,Xn are observed and the true decomposition U0 and V0 are statistically estimated. Actually sometimes NMF has studied in the case when only one target matrix is decomposed, however, in general, decomposition of a set of independent matrices should be studied because target matrices are often obtained daily, monthly, or different places [12]. In such cases, decomposition of a set of matrices results in statistical inference. We consider this situation and it is common to [13] and Theorem 2.1. A statistical model p(X|U,V) which has parameters (U,V) are employed for estimation. Then the free energy and generalization error of Bayesian estimation is given by this theorem.

Let the variational free energy of VBNMF be ¯Fn. Then, the following inequality is attained:

Theorem 3.3 gives a lower bound of the difference of the free energy between the variational approximation and the true.

In orfer to prove Theorem 3.1, we use the following three lemmas which are proved in Appendix A.

Let λ be the absolute of the maximum pole of

Let the entries of the matrices (U,V) be

Now, we prove Theorem3.1 using the above lemmas.

Let K and L be non-negative analytic functions on a finite dimensional Euclid space. A binomial relation ∼ is defined by

respectively. Because of the prior φ(U,V)≧0, all we have to do is find the RLCT of

to derive an upper bound.

Because of that variables are independent and RLCTs are order isomorphic,

In contrast, K2 corresponds to Lemma 3.1 in the case of H←H−H0. That causes

Using the above inequality and equality for inequality(3),

Under the same assumption of the Theorem 3.1, suppose

Using the above relation,

holds. From the above three formulas and m≧1, Theorem 3.2 is attained:

In the same way as the above, we have