To improve the discriminative and generalization ability of lightweight network for face recognition, we propose an efficient variable group convolutional network called VarGFaceNet. Variable group convolution is introduced by VarGNet to solve the conflict between small computational cost and the unbalance of computational intensity inside a block. We employ variable group convolution to design our network which can support large scale face identification while reduce computational cost and parameters. Specifically, we use a head setting to reserve essential information at the start of the network and propose a particular embedding setting to reduce parameters of fully-connected layer for embedding. To enhance interpretation ability, we employ an equivalence of angular distillation loss to guide our lightweight network and we apply recursive knowledge distillation to relieve the discrepancy between the teacher model and the student model. The champion of deepglint-light track of LFR (2019) challenge demonstrates the effectiveness of our model and approach. Implementation of VarGFaceNet will be released at https://github.com/zma-c-137/VarGFaceNet soon. 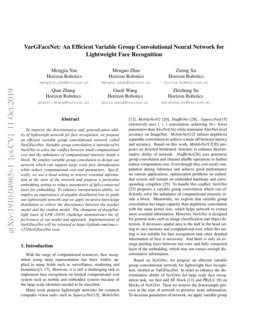 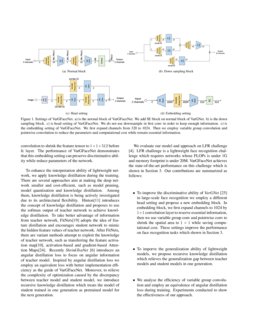 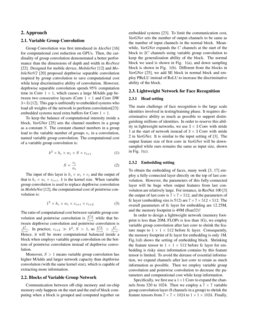 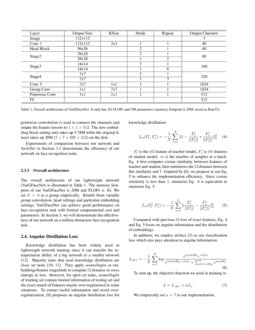 With the surge of computational resources, face recognition using deep representation has been widely applied to many fields such as surveillance, marketing and biometrics[2, 16]

. However, it is still a challenging task to implement face recognition on limited computational cost system such as mobile and embedded systems because of the large scale identities needed to be classified.

while maintains AlexNet-level accuracy on ImageNet.

MobileNet[11] utilizes depthwise separable convolution to achieve a trade off between latency and accuracy. Based on this work, MobileNetV2[19] proposes an inverted bottleneck structure to enhance discriminative ability of network. ShuffleNet[26] uses pointwise group convolution and channel shuffle operations to further reduce computation cost. Even though they cost small computation during inference and achieve good performance on various applications, optimization problems on embedded system still remain on embedded hardware and corresponding compilers [25]. To handle this conflict, VarGNet [25] proposes a variable group convolution which can efficiently solve the unbalance of computational intensity inside a block. Meanwhile, we explore that variable group convolution has larger capacity than depthwise convolution with the same kernel size, which helps network to extract more essential information. However, VarGNet is designed for general tasks such as image classificaiton and object detection. It decreases spatial area to the half in the head setting to save memory and computational cost, while this setting is not suitable for face recognition task since detailed information of face is necessary. And there is only an average pooling layer between last conv and fully connected layer of the embedding, which may not extract enough discriminative information.

Based on VarGNet, we propose an efficient variable group convolutional network for lightweight face recognition, shorted as VarGFaceNet. In order to enhance the discriminative ability of VarGNet for large scale face recognition task, we first add SE block [12] and PReLU [7] on blocks of VarGNet

. Then we remove the downsample process at the start of network to preserve more information. To decrease parameters of network, we apply variable group convolution to shrink the feature tensor to

1×1×512 before fc layer. The performance of VarGFaceNet demonstrates that this embedding setting can preserve discriminative ability while reduce parameters of the network.

We evaluate our model and approach on LFR challenge [3]. LFR challenge is a lightweight face recognition challenge which requires networks whose FLOPs is under 1G and memory footprint is under 20M. VarGFaceNet achieves the state-of-the-art performance on this challenge which is shown in Section 3. Our contributions are summarized as follows:

Group Convolution was first introduced in AlexNet [15] for computational cost reduction on GPUs. Then, the cardinality of group convolution demonstrated a better performance than the dimensions of depth and width in ResNext [22]. Designed for mobile device, MobileNet [11] and MobileNetV2 [19] proposed depthwise separable convolution inspired by group convolution to save computational cost while keep discriminative ability of convolution. However, depthwise separable convolution spends 95% computation time in Conv 1×1, which causes a large MAdds gap between two consecutive laysers (Conv 1×1 and Conv DW 3×3) [11]. This gap is unfriendly to embedded systems who load all weights of the network to perform convolution[23]: embedded systems need extra buffers for Conv 1×1.

Communication between off-chip memory and on-chip memory only happens on the start and the end of block computing when a block is grouped and computed together on embedded systems [23]. To limit the communication cost, VarGNet sets the number of output channels to be same as the number of input channels in the normal block. Meanwhile, VarGNet expands the C channels at the start of the block to 2C channels using variable group convolution to keep the generalization ability of the block. The normal block we used is shown in Fig. 1(a), and down sampling block is shown in Fig. 1(b). Different from the blocks in VarGNet [25]

, we add SE block in normal block and employ PReLU instead of ReLU to increase the discriminative ability of the block.

The main challenge of face recognition is the large scale identities involved in testing/training phase. It requires discriminative ability as much as possible to support distinguishing millions of identities. In order to reserve this ability in lightweight networks, we use 3×3 Conv with stride 1 at the start of network instead of 3×3 Conv with stride 2 in VarGNet. It is similar to the input setting of [2]. The output feature size of first conv in VarGNet will be downsampled while ours remains the same as input size, shown in Fig. 1(c).

To obtain the embedding of faces, many work [2, 16] employ a fully-connected layer directly on the top of last convolution. However, the parameters of this fully-connected layer will be huge when output features from last convoluiton are relatively large. For instance, in ResNet 100 [2] the output of last conv is 7×7×512, and the parameters of fc layer (embedding size is 512) are 7×7×512×512. The overall parameters of fc layer for embedding are 12.25M, and the memory footprint is 49M (float32)!

In order to design a lightweight network (memory footprint is less than 20M, FLOPs is less than 1G), we employ variable group convolution after last conv to shrink the feature maps to 1×1×512 before fc layer. Consequently, the memory footprint of fc layer for embedding is only 1M. Fig.1(d) shows the setting of embedding block. Shrinking the feature tensor to 1×1×512 before fc layer for embedding is risky since information contains by this feature tensor is limited. To avoid the derease of essential information, we expand channels after last conv to retain as much information as possible. Then we employ variable group convolution and pointwise convolution to decrease the parameters and computational cost while keep information.

Experiments of comparison between our network and VarGNet in Section 3.3 demonstrate the efficiency of our network on face recognition tasks.

The overall architecture of our lightweight network (VarGFaceNet) is illustrated in Table 1. The memory footprint of our VarGFaceNet is 20M and FLOPs is 1G. We set S=8 in a group empirically. Benefit from variable group convolution, head settings and particular embedding settings, VarGFaceNet can achieve good performance on face recognition task with limited computational cost and parameters. In Section 3, we will demonstrate the effectiveness of our network on a million distractors face recognition task.

l2 distance or cross entropy as loss. However, for open set tasks, scores/logits of training set contain limited information of testing set and the exact match of featuers maybe over-regularized in some situations. To extract useful information and avoid over-regularization, [5] proposes an angular distillation loss for knowledge distillation:

Fit is the ith feature of teacher model, Fis is ith features of student model. m is the number of samples in a batch. Eq. 4

first computes cosine similarity between features of teacher and student, then minimizes the

l2 distance between this similarity and 1. Inspired by [5], we propose to use Eq. 5 to enhance the implementation efficiency. Since cosine similarity is less than 1, minimize Eq. 4 is equivalent to minimize Eq. 5.

Compared with previous l2 loss of exact features, Eq. 4 and Eq. 5 focus on angular information and the distribution of embeddings.

In addition, we employ arcface [2] as our classification loss which also pays attention to angular information:

To sum up, the objective function we used in training is:

We empirically set α=7 in our implementation.

The results of our experiments in Section 3 illustrate the performance of recursive knowledge distillation.

In this section, we first introduce the datasets and evaluation metric. Then, to demonstrate the effectiveness of our VarGFaceNet, we compare our network with y2 network(a deeper mobilefacenet

We employ the dataset(clean from MS1M[6]) provided by LFR2019 for training. All face images in this dataset are aligned by five facial landmarks predicted from RetinaFace[4] then resized to 112×112. There are 5.1M images collected from 93K identities. For test set, Trillion-pairs dataset [21] is used. It contains two parts: 1) ELFW: Face images of celebrities in the LFW name list. There are 274K images from 5.7K identities; 2) DELFW: Distractors for ELFW. There are 1.58 M face images from Flickr. All test images are preprocessed and resized to 112×112. We refer deepglint-light to trillionpairs testing set in the following. During the training, we utilize face verification datasets (e.g. LFW[13], CFP-FP[20], AgeDB-30[17]) to validate different settings using 1:1 verification protocol. Moreover, we employ the TPR@FPR=1e-8 as evaluation metric for identification.

To validate the efficiency and effectiveness of VarGFaceNet, we first train our network from scratch, and compare the performance with mobilefacenet(y2) [1, 2]. We employ arcface loss as the objective function of classification during training. Tabel 2 presents the comparison results of VarGFaceNet and y2. It can be observed that under the limitation of 1G FLOPs, VarGFaceNet is able to reach better face recognition performance on validation sets. Compared with y2, our verification results of AgeDB-30 , CFP-FP have increased 0.6% and 0.2% respectively, testing result of deepglint-light (TPR@FPR=1e-8) has increased 5%. There are two intuitions for the better performance: 1. our network can contain more parameters than y2 when limit FLOPs because of variable group convolution. The biggest number of channels is 256 in y2 while ours is 320 before last conv. 2. Our embedding setting can extract more essential information. y2 expands the number of channels from 256 to 512 then use 7×7 depthwise convolution to get the feature tensor before fc layer. We expand the number of channels from 320 to 1024 then use variable group convolution and pointwise convolution which have larger network capacity.

To validate the efficiency of our settings, we conduct comparison experiments between our network and VarGNet. Using the same teacher network, we change the head setting of VarGNet

to our head setting for fair comparison and use the same loss function as above. In Tabel

4, the plain VarGNet has lower accuracy in LFW, CFP-FP, AgeDB-30. There is only an average pooling between last conv and fc layer in VarGNet. The results illustrate that our embedding setting is more suitable for face recognition task since it can extract more essential information.

As we discuss in Section 2.5, when there is a large discrepancy between teacher model and student, knowledge distillation for one generation may not enough for knowledge transfer. To validate it, we use ResNet 100 model as our teacher model, and conduct recursive knowledge distillation on VarGFaceNet. A performance improvement shown in Table 5 when we train the model in next generation. The varification result of LFW and CFP-FP is increased by 0.1% while testing result of deepglint-light(TPR@FPR=1e-8) is 0.4% higher than pervious generation. Furthermore, we believe that it will lead to better performance if we continue to conduct training in more generations.

In this paper, we propose an efficient lightweight network called VarGFaceNet for large scale face recognition. Benefit from variable group convolution, VarGFaceNet is capable of finding a better trade-off between efficiency and performance. The head setting and embedding setting specific to face recogniton help preserve information while reduce parametes. Moreover, to improve the interpretation ability of lightweight network, we employ an equivalence of angular distillation loss as our objective function and present a recursive knowledge distillation strategy. The state-of-the-art performance on LFR challenge demonstrates the superiority of our method.

Acknowledgments We would like to thank Xin Wang, Helong Zhou, Zhichao Li, Xiao Jiang, Yuxiang Tuo for their helpful discussion.