Deep speaker embedding has achieved satisfactory performance in speaker verification. By enforcing the neural model to discriminate the speakers in the training set, deep speaker embedding (called `x-vectors`) can be derived from the hidden layers. Despite its good performance, the present embedding model is highly domain sensitive, which means that it often works well in domains whose acoustic condition matches that of the training data (in-domain), but degrades in mismatched domains (out-of-domain). In this paper, we present a domain adaptation approach based on Variational Auto-Encoder (VAE). This model transforms x-vectors to a regularized latent space; within this latent space, a small amount of data from the target domain is sufficient to accomplish the adaptation. Our experiments demonstrated that by this VAE-adaptation approach, speaker embeddings can be easily transformed to the target domain, leading to noticeable performance improvement. 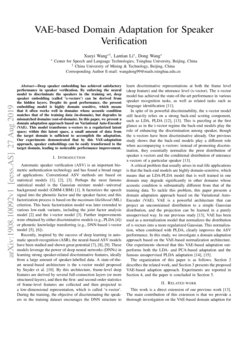 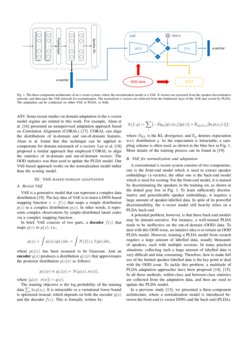 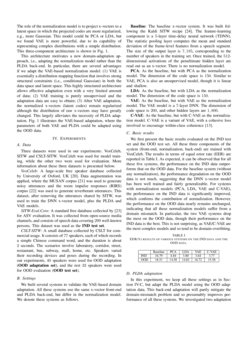 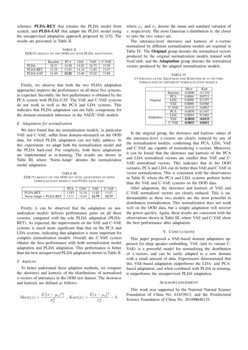 Automatic speaker verification (ASV) is an important biometric authentication technology and has found a broad range of applications. Conventional ASV methods are based on statistical models [18, 8, 3]

. Perhaps the most famous statistical model is the Gaussian mixture model

−universal background model (GMM-UBM) [18]. It factorizes the speech signal into the phonetic factor and the speaker factor, and this factorization process is based on the maximum likelihood (ML) criterion. This basic factorization model was later extended to various low-rank variants, including the joint factor analysis model [8] and the i-vector model [3]. Further improvements were obtained by either discriminative models (e.g., PLDA [7]) or phonetic knowledge transferring (e.g., DNN-based i-vector model [9, 13]).

Recently, inspired by the success of deep learning in automatic speech recognition (ASR), the neural-based ASV models have been studied and shown great potential

. By this architecture, frame-level deep features are derived by several full-connection layers (or more structured layers), and then the first- and second-order statistics of frame-level features are collected and then projected to a low-dimensional representation, which is called ‘x-vector’. During the training, the objective of discriminating the speakers in the training dataset encourages the DNN structure to learn discriminative representations at both the frame level (deep feature) and the utterance level (x-vector). The x-vector model has achieved the state-of-the-art performance in various speaker recognition tasks, as well as related tasks such as language identification

In spite of its powerful discriminability, the x-vector model still heavily relies on a strong back-end scoring component, such as LDA, PLDA [2, 24]. This is puzzling at the first glance as in the i-vector regime the back-end models play the role of enhancing the discrimination among speaker, though the x-vectors have been discriminative already. Our previous study shows that the back-end models play a different role when accompanying x-vectors: instead of promoting discrimination, they essentially normalize the prior distribution of speaker x-vectors and the conditional distribution of utterance x-vectors of a particular speaker [24].

A critical problem that usually arises in real-life applications is that the back-end models are highly domain-sensitive, which means that an LDA-PLDA model that is well trained in one domain may degrade significantly in other domains whose acoustic condition is substantially different from that of the training data. To tackle this problem, this paper presents a domain adaptation approach based on the Variational Auto-Encoder (VAE). VAE is a powerful architecture that can project an unconstrained distribution to a simple Gaussian distribution, and the projection can be learned in a purely unsupervised way. In our previous study

The organization of this paper is as follows. Section 2 describes the related work, and Section 3 presents the proposed VAE-based adaption approach. Experiments are reported in Section 4, and the paper is concluded in Section 5.

This work is a direct extension of our previous work [24]. The main contribution of this extension is that we provide a thorough investigation on the VAE-based domain adaption for ASV. Some recent studies on domain adaptation in the x-vector model regime are related to this work. For example, Alam et al. [1] presented an unsupervised adaptation approach based on Correlation Alignment (CORAL) [22]. CORAL can align the distributions of in-domain and out-of-domain features. Alam et al. found that this technique can be applied to compensate for domain mismatch of x-vectors. Lee et al.  [12] proposed a similar approach that employed CORAL to align the statistics of in-domain and out-of-domain vectors. The OOD statistics was then used to update the PLDA model. Our VAE-based approach works on the normalization model rather than the scoring model.

where p(x|z) has been assumed to be Gaussian. And an encoder g(x) produces a distribution q(z|x) that approximates the posterior distribution p(z|x) as follows:

∑ilnp(xi). It is intractable so a variational lower bound is optimized instead, which depends on both the encoder g(x) and the decoder f(z). This is formally written by:

where DKL is the KL divergence, and Eq denotes expectation w.r.t. distribution q. As the expectation is intractable, a sampling scheme is often used, as shown in the blue box in Fig. 1. More details of the training process can be found in [10].

3.2 VAE for normalization and adaptation

A conventional x-vector system consists of two components, one is the front-end model which is used to extract speaker embeddings (x-vectors), the other one is the back-end model which is used for scoring. For the front-end model, it is trained by discriminating the speakers in the training set, as shown in the dotted gray box in Fig. 1. To learn sufficiently discriminative and generalizable speaker embeddings, it requires a large amount of speaker-labelled data. In spite of its powerful discriminability, the x-vector model still heavily relies on a PLDA back-end.

A potential problem, however, is that these back-end models may be domain-sensitive. For instance, a well-trained PLDA tends to be ineffective on the out-of-domain (OOD) data. To deal with this OOD issue, an intuitive idea is to retrain an OOD PLDA model. However, training a PLDA model from scratch requires a large amount of labelled data, usually thousands of speakers, each with multiple sessions. In many practical situations, collecting such a large amount of labelled data is very difficult and time consuming. Therefore, how to make full use of the limited speaker-labelled data is the key point to deal with the OOD issue. To tackle this problem, a multitude of PLDA adaptation approaches have been proposed [5, 4]. In all these methods, within-class and between-class statistics are collected from the adaptation data, and then are used to update the PLDA model.

In a previous study [24], we presented a three-component architecture, where a normalization model is introduced between the front-end (x-vector DNN) and the back-end (PLDA). The role of the normalization model is to project x-vectors to a latent space in which the projected codes are more regularized, e.g., more Gaussian. This model could be PCA or LDA, but we found VAE is more powerful, due to its capability of representing complex distributions with a simple distribution. This three-component architecture is shown in Fig. 1.

This architecture motivates a new domain-adaptation approach, i.e., adapting the normalization model rather than the PLDA back-end. In particular, there are several advantages if we adapt the VAE-based normalization model: (1) VAE is essentially a distribution mapping function that involves strong structural constraints (i.e., conditional Gaussian) in both the data space and latent space. This highly structured architecture allows effective adaptation even with a very limited amount of data; (2) VAE training is purely unsupervised and the adaptation data are easy to obtain; (3) After VAE adaptation, the normalized x-vectors (latent codes) remain regularized although the distribution of raw x-vectors may have greatly changed. This largely alleviates the necessity of PLDA adaptation. Fig. 1 illustrates the VAE-based adaptation, where the parameters of both VAE and PLDA could be adapted using the OOD data.

Three datasets were used in our experiments: VoxCeleb, SITW and CSLT-SITW. VoxCeleb was used for model training, while the other two were used for evaluation. More information about these three datasets is presented below.

SITW-Eval.Core: A standard free database collected by  [15] for ASV evaluation. It was collected from open-source media channels, and consists of speech data covering 299 well-known persons. This dataset was used as the IND test set.

CSLT-SITW: A small database collected by CSLT for commercial usage. It consists of 77 speakers, each of which records a simple Chinese command word, and the duration is about 2 seconds. The scenarios involve laboratory, corridor, street, restaurant, bus, subway, mall, home, etc. Speakers varied their recording devices and poses during the recording. In our experiments, 40 speakers were used for OOD adaptation (OOD adaptation set), and the rest 33 speakers were used for OOD evaluation (OOD test set).

We built several systems to validate the VAE-based domain adaptation. All these systems use the same x-vector front-end and PLDA back-end, but differ in the normalization model. We denote these systems as follows.

Baseline: The baseline x-vector system. It was built following the Kaldi SITW recipe [17]. The feature-learning component is a 5

-layer time-delay neural network (TDNN). The statistic pooling layer computes the mean and standard deviation of the frame-level features from a speech segment. The size of the output layer is

7,185, corresponding to the number of speakers in the training set. Once trained, the 512-dimensional activations of the penultimate hidden layer are read out as an x-vector. There is no normalization model.

PCA: As the baseline, but with PCA as the normalization model. The dimension of the code space is 150. Similar to VAE, PCA is also an unsupervised model, though it is linear and shallow.

LDA: As the baseline, but with LDA as the normalization model. The dimension of the code space is 150.

VAE: As the baseline, but with VAE as the normalization model. The VAE model is a 7-layer DNN. The dimension of code space is 200, and other hidden layers are 1,800.

C-VAE: As the baseline, but with C-VAE as the normalization model. C-VAE is a variant of VAE, with a cohesive loss involved to encourage within-class coherence [24].

Firstly, we observe that both the two PLDA adaptation approaches improve the performance on all these five systems, as expected. Secondly, the best performance is obtained by the PCA system with PLDA-UAT. The VAE and C-VAE systems do not work as well as the PCA and LDA systems. This indicates that PLDA adaptation can not fully compensate for the domain-mismatch inherence in the VAE/C-VAE models.

where μx and σx denote the mean and standard variation of x, respectively. The more Gaussian a distribution is, the closer to zero the two values are.

After adaptation, the skewness and kurtosis of VAE and C-VAE normalized vectors are clearly reduced. This is understandable as these two models are the most powerful in distribution normalization. This normalization does not work well on the OOD data, but a simple adaptation will recover the power quickly. Again, these results are consistent with the observations shown in Table 3, where VAE and C-VAE show the best performance after adaptation.

This paper proposed a VAE-based domain adaptation approach for deep speaker embedding. VAE (and its variant C-VAE) is a powerful model for normalizing the distribution of x-vectors, and can be easily adapted to a new domain with a small amount of data. Experiments demonstrated that this VAE-based adaptation outperforms the LDA- and PCA-based adaptation, and when combined with PLDA re-training, it outperforms the unsupervised PLDA adaptation.