Atrial Fibrillation (AF) is a common electro-physiological cardiac disorder that causes changes in the anatomy of the atria. A better characterization of these changes is desirable for the definition of clinical biomarkers, and thus there is a need of its fully automatic segmentation from clinical images. In this work we present an architecture based in 3D-convolution kernels, a Volumetric Fully Convolution Neural Network (V-FCNN), able to segment the entire volume in one-shot, and consequently integrate the implicit spatial redundancy present in high resolution images. A loss function based on the mixture of both Mean Square Error (MSE) and Dice Loss (DL) is used, in an attempt to combine the ability to capture the bulk shape and the reduction of local errors products by over segmentation. Results demonstrate a reasonable performance in the middle region of the atria, and the impact of the challenges of capturing the variability of the pulmonary veins or the identification of the valve plane that separates the atria to the ventricle. 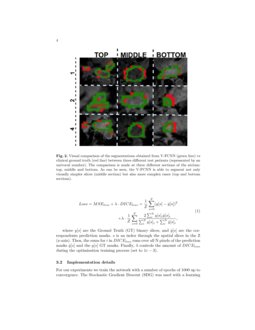 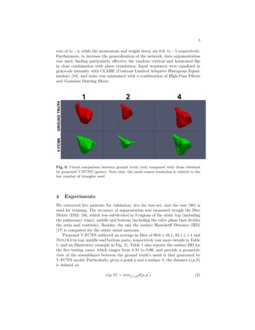 Detection of cartilage loss is crucial for the diagnosis of osteo- and r...
Nikita Vladimirov, et al. ∙

Atrial Fibrillation (AF) is a common electro-physiological cardiac disorder with a large prevalence worldwide [1] that causes changes in the anatomy of the atria. A better characterization of these changes as a consequence of the substrate that causes and sustains fibrillation is desirable for the definition of clinical biomarkers. These biomarkers can be directly started from the image (i.e. the shape of the atria [2], or the fibrotic burden from late gadolinium enhanced (LGE) magnetic resonance imaging (MRI) [3]) or from mechanistic simulations of the function (i.e. computation of the risk of arrhythmia perpetuation [4]).

There is thus a need for a fully automatic segmentation of the atria from clinical images, especially in LGE studies. The current state of the art is based in tedious along with error-prone manual procedures, and the main difficulty is the lack of contrast from atrial tissue including the surrounding background. Fully automated solutions are desirable to speed up the process and remove inter- and intra-observer variability. In this direction, a combination of multi-atlas registration within 3D level-set has been proposed, reporting a reasonable performance in the main atrial body and pulmonary vein regions [5]. The large computational burden of this multi-atlas approach can be alleviated by the use of convolutional neural networks (CNNs), as it has been illustrated in [6] for the analysis of 2D MRI slices.

The first idea followed in this work is the use of 3D CNNs as the effective solution for the segmentation of the 3D LGE datasets. The starting point is the v-net [7], which takes into consideration the spatial redundancy naturally present on the entire volumetric stack with 3D-kernels, showing good benefits in different cardiac segmentation problems [8],[9]. This architecture is modified to reduce the memory burden and speed-up its training. The last idea explored in this work is the choice of a sensible loss function, the joint combination of both the mean squared error (MSE) and Dice Loss, which has been reported to be beneficial as the MSE minimizes global image details while the Dice Loss reduces local over-segmentation errors [7].

Image down-sampling during a segmentation task presents the problem of feature map reduction, followed by a strong spatial information loss. This problem has been addressed in v-net [7], [8] by adding skips layers between down-sampling and up-sampling layers in order to fuse low-level features within high level features.

Our work explores an alternative approach to the skip path connections. In particular, we boost our model to capture fine details in two ways. First, the use of max-pooling operations is avoided in order to prevent the loss of spatial resolution (i.e if pools do not overlap well, pooling operation loses appreciable information where the objects are located in the image). The second idea is to use a loss layer that combines the

MSEloss and DICEloss metrics as an attempt to recover details in the image. The rationale is that the DICEloss term searches for local details in the volume data, as a consequence, the MSEloss can be seen as a regularization that instead focuses on global features on the MRI volume. This bimodal loss also prevents the V-FCNN to fall in a local minimum; especially within small atrial regions. Specifically, the loss is defined as:

where y[s] are the Ground Truth (GT) binary slices, as well as ^y[s] are the correspondent’s prediction masks. s is an index through the spatial slices in the Z (z-axis). Then, the sums for i in DICEloss runs over all N pixels of the prediction masks ^y[s] and the y[s] GT masks. Finally, λ controls the amount of DICEloss during the optimisation training process (set to 1e−3).

∼32 GB). An up-sampling bi-cubic interpolation is finally used for restoring the mask to the size of 640×640 pixels.

For our experiments, we train the network with a number of epochs of 1000 up to convergence. The Stochastic Gradient Descent (SDG) was used with a learning rate of

1e−4, while the momentum and weight decay are 0.9, 1e−5 respectively. Furthermore, to increase the generalization of the network, data argumentation was used, finding particularly effective the random vertical and horizontal flip in close combination with plane translation. Input sequences were equalized in grayscale intensity with CLAHE (Contrast Limited Adaptive Histogram Equalization) [10], and the noise was minimized with a combination of High-Pass Filters and Gaussian blurring filters.

The experimentation phase is divided into two phases. In the first phase (preparation phase) 5 patients are used for validation (440 slices in total), and the rest (90) is used for training. In the second phase (competition), our algorithm was evaluated in the test-set with 54 patients (4752 atria slices in total).

Segmentation accuracy was measured with the Dice Metric (DM) [11], which was subdivided into 3 regions of the atria: top (including the pulmonary veins), middle and bottom (including the valve plane that divides the atria and ventricle). Besides, DM and the surface Hausdorff Distance (HD) [12] are computed for the entire atrial anatomy.

Particularly, given a point p and a surface S, the distance \upvarepsilon(p.S) is defined as:

whereas the d(⋅) is the Euclidean distance between two points in a Euclidean space. Then, the HD between mesh surfaces SGroundTruth and Svfcnn is given as:

Visual inspection of the contours reveals how a loss of accuracy is seen on the first top slices for two of the cases, creating an artificial flattening of the shape (see patients 1 and 2 of Fig. 3), and on the top of the atria with the more variable anatomy of the pulmonary veins.

The exploitation of spatial coherence across different volumetric slices is an important resource for improving the accuracy of fully automated segmentation. Proposed V-FCNN achieves a good segmentation performance, mostly in the middle atrial section. Limitations occur in the top and bottom sections, caused by the presence of the pulmonary veins and the difficulty to identify where the atria and ventricle split. In the preparation phase the V-FCNN achieved a DM between 82.05(3.43) (top case) and 69.23(14.92) (worst case), along with a DM of 92.5 at the competition phase.

A cardiac imaging study has a huge level of correlation in space, as well as many segmentation algorithms have exploited the spatial coherence within different deep-learning techniques [7], [8], [9], [13], [14]. Some of them have used 3D convolutional kernels [7], [8], [9] that have the advantage of directly capturing the spatial information in each convolutional layer without adding extra parameters (i.e. the addition of a recurring network). This is the main reason that has driven us to use them in our optimized V-FCNN.

The limitation of the 3D convolutional kernels is the large memory burden, and this is the reason why the original detail of the images was reduced (from 640 to 127 pixels). However, this image reduction is required due to the current hardware limitations available. In fact, while the 3D kernels have a good ability to extract the spatial correlation of the MRI sequence, on the other they need a high capacity in GPU global memory size. Thus, an excessive reduction of the MRI to adapt to the available hardware causes an inevitable loss in segmentation details (i.e probable motivation of

Furthermore, the concatenation of two CNNs, the second working at the full resolution cropping the region of interests containing the atria, is a good strategy that will minimize the impact of this choice. An alternative is to work with the information at two levels of detail, which has shown to achieve a better performance [16].

Proposed V-FCNN simplifies the v-net [7] by removing the skip-paths, in an attempt to achieve a much quicker training convergence. The constitutive advantage of the skip-paths is to increase the localization, but this comes at the cost of a considerable slow down of the speed of the network (i.e GPU global memory leak) while propagating the gradient, at every iteration, forward and back through those paths [17].

The choice of the loss function is an important consideration in any CNN, and the joint minimization of MSE and Dice Loss has been adopted in our solution. The interpretation is that the MSE looks at global volumetric features, while the Dice Loss (DL) regularize it trying to fit local details. This choice allowed the learning to avoid local minima and the corresponding slow convergence of using only MSE. The optimal weight between them, and the inclusion of further criteria such as an L1/L2 loss or a statistical distance to a library of existing cases, should be addressed in future extensions of this work.

. But these solutions are limited by the vanishing gradient that unfortunately occurs within long sequences, what can be partially avoided by imposing upper bound constraints on the backward gradient (ie. gradient clipping) or with a regularisation term

[18]. Future work is thus still needed to maximize the synergies between 3D kernels and recurrent units within a more higher input MRI resolution.