Most binary classifiers work by processing the input to produce a scalar response and comparing it to a threshold value. The various measures of classifier performance assume, explicitly or implicitly, probability distributions P_s and P_n of the response belonging to either class, probability distributions for the cost of each type of misclassification, and compute a performance score from the expected cost. In machine learning, classifier responses are obtained experimentally and performance scores are computed directly from them, without any assumptions on P_s and P_n. Here, we argue that the omitted step of estimating theoretical distributions for P_s and P_n can be useful. In a biometric security example, we fit beta distributions to the responses of two classifiers, one based on logistic regression and one on ANNs, and use them to establish a categorisation into a small number of classes with different extremal behaviours at the ends of the ROC curves. 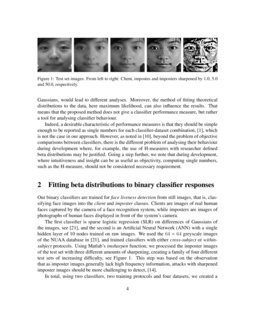 A Theoretical Analysis of Logistic Regression and Bayesian Classifiers

How many labeled examples are needed to estimate a classifier's performa...
Peter Welinder, et al. ∙

In many real-world applications of machine learning classifiers, it is e...
Aditya Menon, et al. ∙

Equivalences between learning of data and probability distributions, and their applications

Classifier Calibration: with implications to threat scores in cybersecurity

This paper explores the calibration of a classifier output score in bina...
Waleed A. Yousef, et al. ∙

Machine learning based binary classifiers usually work by processing the input to produce a response r, most often a real number normalised in the interval [0,1], and then comparing r with a threshold t

and accordingly assigning the input into one of the two classes. This is a standard paradigm followed even by the newest approaches to the binary classification problem, where layers added on top of pretrained deep neural networks such as ResNet

[19] or U-Net [18] transform the output into a scalar response r, which is then compared to a threshold.

The motivation for this paper is the observation of a dichotomy in the practice of binary classifier analysis and assessment. In machine learning, where classifiers do compute response values, performance measures are computed directly from the responses, without fitting to them theoretical distributions Ps and Pn of the probability that the response belongs to either class. In other words, performance measures are computed from the empirical distributions of Ps and Pn. In contrast, when the binary classification task is performed by humans the response value r is unknown, and since it lacks any obvious physical meaning, there is no attempt to estimate it. Instead, detection theory is employed to estimate theoretical probability distributions from the outcome of the experiment, [11]. Signal detection is also employed in the analysis of medical diagnostic tests returning black box binary outcomes, [13].

Here, our goal is to bridge this dichotomy and illustrate the benefits of adopting a detection theory approach to the analysis of machine learning binary classifiers. Working on a case study from the area of biometric liveness detection, we perform the intermediate step of computing theoretical distributions for the responses of a machine learning classifier and use them to analyse the classifier’s behaviour. Specifically, we fit maximum likelihood beta distributions and compare the behaviour of two different classifiers, on four datasets of varying difficulty, using either cross or within subject validation.

where TP, FP and FN denote the numbers of true positves, false positives and false negatives, respectively. They assume a fixed, optimal threshold value, while others, such as the Area Under the Curve (AUC) or the Smirnov-Kolmogorov statistic, consider a variable threshold and attempt to address the trade-off between the two misclassification types, see for example [7, 17, 5]. The latter case is further complicated by the fact that the misclassification costs of false positives and negatives may be application dependent and in some cases cannot even be assigned fixed values but are assumed to follow probability distributions Pfp and Pfn.

In [8], it was shown that various commonly used performance measures admit a mathematical description as the expected misclassification cost under certain assumptions about Pfp,Pfn, which in the case of the Smirnov-Kolmogorov statistic are unrealistic convenience assumptions, while in the case of AUC depend on Ps,Pn. In response to those evident limitations of these measures, the H-measure was proposed which models Pfp,Pfn as beta distributions, [8].

, as they conveniently have support in [0,1] and come in a diversity of shapes. However, they are not used for such purposes as widely as normal distributions, perhaps because in many applications a total number of four independent parameters is considered large. In

[9], it was shown that the H-measure can alternatively be directly derived from classifier responses, without reference to beta distributed misclassification costs. In [2, 15], the cultural knowledge of individuals is modelled by two beta distributions, but the statistical analysis does not include the construction of ROC curves. In [20], beta distributions are used to model probabilistic human forecasts and ROC curves are constructed using a hierarchical (group/individual) Bayesian approach.

In [6], beta distributions are used to model the ROC curve itself rather than Ps,Pn. Their analysis shows superior properties than normal distribution modelling, especially when ROC curve concavity is required. In [12], concave ROC curves are constructed by modelling Ps,Pn with a pair of dual beta distributions with two free variables. Here, as concavity is a constraint we want to avoid, we do not restrict the parameter range of the beta curves. Indeed, in practice, including the classifiers analysed in this paper, it is quite common for the empirical ROC curve of a machine learning classifier to be under the diagonal near 0 or 1.

Finally, in an approach that is most similar to ours, the assessment of medical diagnostic tests with continuous random variables as outcome often uses theoretical distributions estimated from the test’s scalar responses,

. However, since medical data are usually sparse, the fitted distributions are very simple, usually normal and quite often with equal standard deviations,

Compared to the commonly used machine learning performance measures, our approach gives novel insights to the behaviour of a classifier, which is not straightforward to gain directly from the empirical response distributions. In particular:

The main limitation of the proposed approach is that our choice of family of theoretical distributions is to some extent arbitrary and other natural choices, such as mixtures of Gaussians, would lead to different analyses. Moreover, the method of fitting theoretical distributions to the data, here maximum likelihood, can also influence the results. That means that the proposed method does not give a classifier performance measure, but rather a tool for analysing classifier behaviour.

Indeed, a desirable characteristic of performance measures is that they should be simple enough to be reported as single numbers for each classifier-dataset combination, [1], which is not the case in our approach. However, as noted in [10], beyond the problem of objective comparisons between classifiers, there is the different problem of analysing their behaviour during development where, for example, the use of H-measures with researcher defined beta distributions may be justified. Going a step further, we note that during development, where intuitiveness and insight can be as useful as objectivity, computing single numbers, such as the H-measure, should not be considered necessary requirement.

Our binary classifiers are trained for face liveness detection from still images, that is, classifying face images into the client and imposter

The first classifier is sparse logistic regression (SLR) on differences of Gaussians of the images, see [21], and the second is an Artificial Neural Network (ANN) with a single hidden layer of 10 nodes trained on raw images. We used the 64×64 greyscale images of the NUAA database in [21], and trained classifiers with either cross-subject or within-subject protocols. Using Matlab’s imsharpen function, we processed the imposter images of the test set with three different amounts of sharpening, creating a family of four different test sets of increasing difficulty, see Figure 1. This step was based on the observation that as imposter images generally lack high frequency information, attacks with sharpened imposter images should be more challenging to detect, [14].

In total, using two classifiers, two training protocols and four datasets, we created a 2×2×4 space to observe variations in the shape of the theoretical distributions of the responses. In all cases, we fitted two maximum likelihood beta distributions, one on responses on imposters and one on clients, using Matlab’s betafit function. The computational time for fitting a beta distribution on 1000 responses was approximately16ms on a macOS with 2.3GHz i5 CPU, 8GB 2133MHz LPDDR3 RAM and an Iris Plus Graphics 640 1536MB. The low computational cost means that the method is fast enough to be used repeatedly for systematic parameter optimisation, or in large multi-parameter ablation studies for gaining insights into the classifier’s performance on complex tasks.

3 shows the plots and Table 1 shows the values of the α,β parameters of the fitted distributions.

3.1 Shapes of the beta distributions

In all our experiments the obtained distributions were either J-shaped or U-shaped. The client distributions were U-shaped in both cross-subject validation cases and J-shaped in both within-subject, reflecting the more challenging nature of cross-subject validation. Indeed, when the client distribution is U-shaped, the rate of reduction of the false negatives decreases as the threshold approaches 0, while a U-shaped imposter distribution means a decreasing rate of reduction of the false positives as the threshold approaches 1.

3.2 Extremal properties of the ROC curves

Let (α1,β1) and (α2,β2) be the beta parameters of clients and imposters, respectively. Up to a constant, the respective cumulative distributions Fc(x) and Fi(x) are

From Table 1 we notice that in all cases, apart from the two exceptions of cross-validated SLR classifiers with sharpening parameters 0 and 1, we have α1>α2, the semi-derivative at 0 is ∞ and thus, the ROC curve stays above the diagonal near 0. That indicates that weak ANN based classifiers operating at thresholds close to 0 can be included in an ensemble. The situation is different with the SLR classifiers, the low performance of which on unseen faces at thresholds near 0 makes them unsuitable. A similar comment on the limitations of SLR based classifiers at thresholds near 0 was made in [21], but it was based on visual inspection of the empirical ROC curves.

Regarding the behaviour of the theoretical ROC curves near 1, we notice that in all cases the left semi-derivative is 0, meaning that the ROC curves stay above the diagonal, indicating suitability for inclusion in ensembles of weak classifiers operating at thresholds close to 1. We also notice that the difference β2−β1 decreases for the two larger amounts of sharpening, meaning that the ROC curves level-off at slower pace, again indicating the effectiveness of the sharpening attack.

We propose the use of theoretical ROC curves for analysing the behaviour of machine learning binary classifiers. While our approach does not provide a new objective classifier performance measure, we demonstrated its usefulness as an analytical tool facilitating classifier development.

The proposed continuous approach was used to get insights that can be easily lost in a discrete setting. We studied in a natural way classifier behaviour near the two ends of the threshold range and showed that beta distributions in particular have the expressive power to model that behaviour. We note that while any computation one can do with continuous ROC curves can in principle be performed directly on the discrete set of responses, to the best of our knowledge, the question of performance at the extrema of the threshold range has not been previously addressed in such a systematic way. Finally, we showed that the use of theoretical ROC curves based on beta distributions can lead to a natural categorization of classifier behaviour into a few classes, an approach to the analysis of classifiers which, to the best of our knowledge, has be overlooked as far as machine learning classifiers are concerned.

In the future, we would like to further study theoretical ROC curves based on beta distributions and discover properties that could be relevant to the behaviour of machine learning binary classifiers. The use of very large synthetic datasets, allowing the dense sampling of the parameter space of the synthetic data generator, would greatly facilitate such a study.