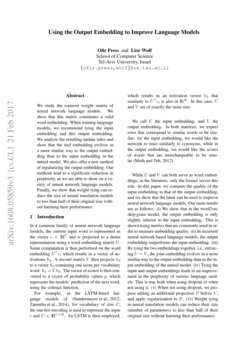 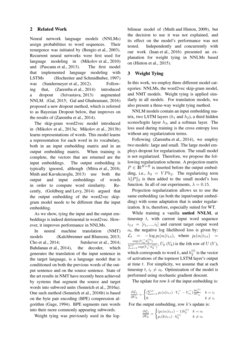 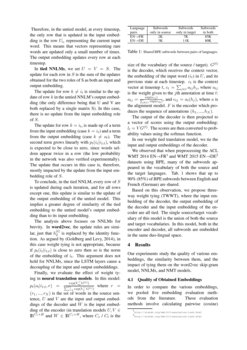 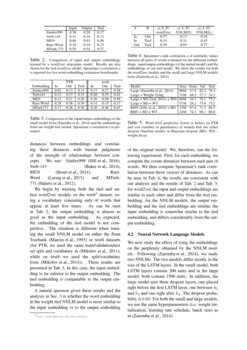 In a common family of neural network language models, the current input word is represented as the vector

c∈IRC and is projected to a dense representation using a word embedding matrix U. Some computation is then performed on the word embedding U⊤c, which results in a vector of activations h2. A second matrix V then projects h2 to a vector h3 containing one score per vocabulary word: h3=Vh2

. The vector of scores is then converted to a vector of probability values

p, which represents the models’ prediction of the next word, using the softmax function.

For example, in the LSTM-based language models of [Sundermeyer et al.2012, Zaremba et al.2014], for vocabulary of size C

, the one-hot encoding is used to represent the input

c and U∈IRC×H. An LSTM is then employed, which results in an activation vector h2 that similarly to U⊤c, is also in IRH. In this case, U and V are of exactly the same size.

While U and V

U=V, the joint embedding evolves in a more similar way to the output embedding than to the input embedding of the untied model. (iv) Tying the input and output embeddings leads to an improvement in the perplexity of various language models. This is true both when using dropout or when not using it. (v) When not using dropout, we propose adding an additional projection P before V, and apply regularization to P. (vi) Weight tying in neural translation models can reduce their size (number of parameters) to less than half of their original size without harming their performance.

As we show, tying the input and the output embeddings is indeed detrimental in word2vec. However, it improves performance in NNLMs.

[Kalchbrenner and Blunsom2013, Cho et al.2014, Sutskever et al.2014, Bahdanau et al.2014], the decoder, which generates the translation of the input sentence in the target language, is a language model that is conditioned on both the previous words of the output sentence and on the source sentence. State of the art results in NMT have recently been achieved by systems that segment the source and target words into subword units [Sennrich et al.2016a]. One such method [Sennrich et al.2016b] is based on the byte pair encoding (BPE) compression algorithm [Gage1994]. BPE segments rare words into their more commonly appearing subwords.

Weight tying was previously used in the log-bilinear model of [Mnih and Hinton2009], but the decision to use it was not explained, and its effect on the model’s performance was not tested. Independently and concurrently with our work [Inan et al.2016] presented an explanation for weight tying in NNLMs based on [Hinton et al.2015].

In this work, we employ three different model categories: NNLMs, the word2vec skip-gram model, and NMT models. Weight tying is applied similarly in all models. For translation models, we also present a three-way weight tying method.

, and a softmax layer. The loss used during training is the cross entropy loss without any regularization terms.

is then added to the small model’s loss function. In all of our experiments,

Projection regularization allows us to use the same embedding (as both the input/output embedding) with some adaptation that is under regularization. It is, therefore, especially suited for WT.

ot, the negative log likelihood loss is given by: Lt=−logpt(ot|i1:t), where pt(ot|i1:t)=exp(V⊤oth(t)2)∑Cx=1exp(V⊤xh(t)2), Uk (Vk) is the kth row of U (V), which corresponds to word k, and h(t)2 is the vector of activations of the topmost LSTM layer’s output at time t. For simplicity, we assume that at each timestep t, it≠ot

. Optimization of the model is performed using stochastic gradient descent.

The update for row k of the input embedding is:

For the output embedding, row k’s update is:

Therefore, in the untied model, at every timestep, the only row that is updated in the input embedding is the row Uit representing the current input word. This means that vectors representing rare words are updated only a small number of times. The output embedding updates every row at each timestep.

In tied NNLMs, we set U=V=S. The update for each row in S is the sum of the updates obtained for the two roles of S as both an input and output embedding.

The update for row k≠it is similar to the update of row k in the untied NNLM’s output embedding (the only difference being that U and V are both replaced by a single matrix S). In this case, there is no update from the input embedding role of S.

The analysis above focuses on NNLMs for brevity. In word2vec, the update rules are similar, just that h(t)2 is replaced by the identity function. As argued by [Goldberg and Levy2014], in this case weight tying is not appropriate, because if pt(it|i1:t) is close to zero then so is the norm of the embedding of it. This argument does not hold for NNLMs, since the LSTM layers cause a decoupling of the input and output embedddings.

Finally, we evaluate the effect of weight tying in neural translation models. In this model: pt(ot|i1:t,r)=exp(V⊤otG(t))∑Ctx=1exp(V⊤xG(t)) where r=(r1,...,rN) is the set of words in the source sentence, U and V are the input and output embeddings of the decoder and W is the input embedding of the encoder (in translation models U,V∈IRCt×H and W∈IRCs×H, where Cs / Ct is the size of the vocabulary of the source / target). G(t) is the decoder, which receives the context vector, the embedding of the input word (it) in U, and its previous state at each timestep. ct is the context vector at timestep t, ct=∑j∈ratjhj, where atj is the weight given to the jth annotation at time t: atj=exp(etj)∑k∈rexp(eik), and etj=at(hj), where a is the alignment model. F is the encoder which produces the sequence of annotations (h1,...,hN).

The output of the decoder is then projected to a vector of scores using the output embedding: lt=VG(t). The scores are then converted to probability values using the softmax function.

In our weight tied translation model, we tie the input and output embeddings of the decoder.

We observed that when preprocessing the ACL WMT 2014 EN→FR111http://statmt.org/wmt14/translation-task.html and WMT 2015 EN→DE222http://statmt.org/wmt15/translation-task.html datasets using BPE, many of the subwords appeared in the vocabulary of both the source and the target languages. Tab. 1 shows that up to 90% (85%) of BPE subwords between English and French (German) are shared.

Our experiments study the quality of various embeddings, the similarity between them, and the impact of tying them on the word2vec skip-gram model, NNLMs, and NMT models.

We next study the effect of tying the embeddings on the perplexity obtained by the NNLM models. Following [Zaremba et al.2014], we study two NNLMs. The two models differ mostly in the size of the LSTM layers. In the small model, both LSTM layers contain 200 units and in the large model, both contain 1500 units. In addition, the large model uses three dropout layers, one placed right before the first LSTM layer, one between h1 and h2 and one right after h2. The dropout probability is 0.65

. For both the small and large models, we use the same hyperparameters (i.e. weight initialization, learning rate schedule, batch size) as in

In addition to training our models on PTB and text8, following [Miyamoto and Cho2016], we also compare the performance of the NNLMs on the BBC [Greene and Cunningham2006] and IMDB [Maas et al.2011] datasets, each of which we process and split into a train/validation/test split (we use the same vocabularies as [Miyamoto and Cho2016]).

In the first experiment, which was conducted on the PTB dataset, we compare the perplexity obtained by the large NNLM model and our version in which the input and output embeddings are tied. As can be seen in Tab. 5, weight tying significantly reduces perplexity on both the validation set and the test set, but not on the training set. This indicates less overfitting, as expected due to the reduction in the number of parameters. Recently, [Gal and Ghahramani2016], proposed a modified model that uses Bayesian dropout and weight decay. They obtained improved performance. When the embeddings of this model are tied, a similar amount of improvement is gained. We tried this with and without weight decay and got similar results in both cases, with slight improvement in the latter model. Finally, by replacing the LSTM with a recurrent highway network [Zilly et al.2016], state of the art results are achieved when applying weight tying. The contribution of WT is also significant in this model.

Perplexity results are often reported separately for models with and without dropout. In Tab. 6, we report the results of the small NNLM model, that does not utilize dropout, on PTB. As can be seen, both WT and projection regularization (PR) improve the results. When combining both methods together, state of the art results are obtained. An analog table for text8, IMDB and BBC is Tab. 7, which shows a significant reduction in perplexity across these datasets when both PR and WT are used. PR does not help the large models, which employ dropout for regularization.

Finally, we study the impact of weight tying in attention based NMT models, using the DL4MT444https://github.com/nyu-dl/dl4mt-tutorial implementation. We train our EN→FR models on the parallel corpora provided by ACL WMT 2014. We use the data as processed by [Cho et al.2014] using the data selection method of [Axelrod et al.2011]. For EN→DE we train on data from the translation task of WMT 2015, validate on newstest2013 and test on newstest2014 and newstest2015. Following [Sennrich et al.2016b] we learn the BPE segmentation on the union of the vocabularies that we are translating from and to (we use BPE with 89500 merge operations). All models were trained using Adadelta [Zeiler2012] for 300K updates, have a hidden layer size of 1000 and all embedding layers are of size 500.