Mixtures of Gaussian distributions are a popular choice in model-based clustering. Outliers can affect parameters estimation and, as such, must be accounted for. Algorithms such as TCLUST discern the most likely outliers, but only when the proportion of outlying points is known a priori. It is proved that, for a finite Gaussian mixture model, the log-likelihoods of the subset models are beta-distributed. An algorithm is then proposed that predicts the proportion of outliers by measuring the adherence of a set of subset log-likelihoods to a beta reference distribution. This algorithm removes the least likely points, which are deemed outliers, until model assumptions are met. 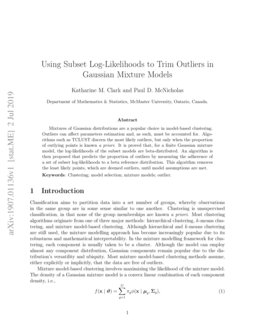 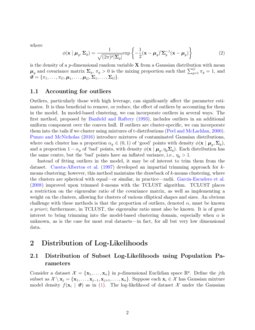 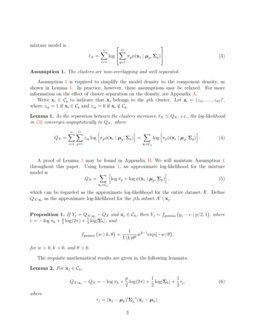 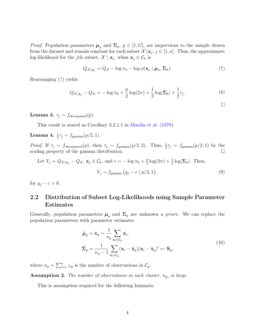 Classification aims to partition data into a set number of groups, whereby observations in the same group are in some sense similar to one another. Clustering is unsupervised classification, in that none of the group memberships are known a priori

. Most clustering algorithms originate from one of three major methods: hierarchical clustering,

Mixture model-based clustering involves maximizing the likelihood of the mixture model. The density of a Gaussian mixture model is a convex linear combination of each component density, i.e.,

is the density of a p

Outliers, particularly those with high leverage, can significantly affect the parameter estimates. It is thus beneficial to remove, or reduce, the effect of outliers by accounting for them in the model. In model-based clustering, we can incorporate outliers in several ways. The first method, proposed by Banfield and Raftery (1993), includes outliers in an additional uniform component over the convex hull. If outliers are cluster-specific, we can incorporate them into the tails if we cluster using mixtures of t-distributions (Peel and McLachlan, 2000). Punzo and McNicholas (2016) introduce mixtures of contaminated Gaussian distributions, where each cluster has a proportion αg∈(0,1) of ‘good’ points with density ϕ(x∣μg,Σg), and a proportion 1−αg of ‘bad’ points, with density ϕ(x∣μg,ηgΣg)

. Each distribution has the same centre, but the ‘bad’ points have an inflated variance, i.e.,

Instead of fitting outliers in the model, it may be of interest to trim them from the dataset. Cuesta-Albertos et al. (1997) developed an impartial trimming approach for k-means clustering; however, this method maintains the drawback of k-means clustering, where the clusters are spherical with equal—or similar, in practice—radii. García-Escudero et al. (2008) improved upon trimmed k

-means with the TCLUST algorithm. TCLUST places a restriction on the eigenvalue ratio of the covariance matrix, as well as implementing a weight on the clusters, allowing for clusters of various elliptical shapes and sizes. An obvious challenge with these methods is that the proportion of outliers, denoted

α, must be known a priori; furthermore, in TCLUST, the eigenvalue ratio must also be known. It is of great interest to bring trimming into the model-based clustering domain, especially when α is unknown, as is the case for most real datasets—in fact, for all but very low dimensional data.

The clusters are non-overlapping and well separated.

Assumption 1 is required to simplify the model density to the component density, as shown in Lemma 1. In practice, however, these assumptions may be relaxed. For more information on the effect of cluster separation on the density, see Appendix A.

As the separation between the clusters increases, ℓX≃QX, i.e., the log-likelihood in (3) converges asymptotically to QX, where

A proof of Lemma 1 may be found in Appendix B. We will maintain Assumption 1 throughout this paper. Using Lemma 1, an approximate log-likelihood for the mixture model is

The requisite mathematical results are given in the following lemmata.

Population parameters μg and Σg, g∈[1,G], are impervious to the sample drawn from the dataset and remain constant for each subset X∖xj, j∈[1,n]. Thus, the approximate log-likelihood for the jth subset, X∖xj, when xj∈Ch is

by the scaling property of the gamma distribution. ∎

where ng=∑ni=1zig is the number of observations in Cg.

The number of observations in each cluster, ng, is large.

This is assumption required for the following lemmata.

Sample parameter estimates are asymptotically equal for all subsets:

Ververidis and Kotropoulos (2008) prove this result for all n,p satisfying p<n<∞.

We will perform a change of variables. Let Xj=nh(nh−1)2Tj and Yj=12Tj+c. Then

The inverse function is

Because Xj is beta-distributed, its density is

for xj≥0, α>0, and β>0. The transformation of variables allows the density of Yj to be written

The density of Yj becomes

Y has density f(y∣ϑ) from (20) when typical model assumptions hold. If the density in (20) does not describe the distribution of subset log-likelihoods, i.e. they are not beta-distributed, then we can conclude that at least one model assumption fails. In this case, we will assume that only the outlier assumption has been violated and that there are, in fact, outliers in the model.

Let Y be the set of subset log-likelihoods generated from the data, i.e., Y is the realization of random variable Y. We propose testing the adherence of Y to the reference distribution in (20) as a way to test for the presence of outliers. In other words, if Y is not beta-distributed, then outliers are present in the model. Because QX is asymptotically equal to ℓX, we will use ℓX. This is important because we will need ℓX∖xj

for outlier identification and, additionally, it is outputted by many existing clustering algorithms. The algorithm described below utilizes the log-likelihood and parameter estimates calculated using the expectation-maximization (EM) algorithm

(Dempster et al., 1977) for Gaussian model-based clustering; however, other methods may be used to estimate parameters and the overall log-likelihood.

OCLUST both identifies likely outliers and determines the proportion of outliers within the dataset. The OCLUST algorithm assumes all model assumptions hold, except that outliers are present. The algorithm involves removing points one-by-one until the density in (20) describes the distribution of Y, which is determined using Kullback-Leibler (KL) divergence, estimated via relative frequencies. Notably, KL divergence generally decreases as outliers are removed and the model improves. Once all outliers are removed, KL divergence increases again as points are removed from the tails. We select the number of outliers as the location of the global minimum. With each iteration, we remove the most likely outlier.

With each iteration, we define the most likely outlier as t=xk, where

In other words, we assign the kth point as outlying if the log-likelihood is greatest when point t=xk is removed. The OCLUST algorithm proceeds as follows:

The following simulation study tests the performance of OCLUST against the popular trimming method TCLUST. The datasets were generated to closely mimic those used in García-Escudero et al. (2008) and, as such, the simulation scheme and notation used here are borrowed from García-Escudero et al. (2008). Datasets containing three clusters with means μ1=(0,8,0,…,0)′,μ2=(8,0,0,…,0)′, and μ3=(−8,−8,0,…,0)′, respectively, were generated with n=1000, and p=2 or p=6. Covariance matrices were generated of the forms:

With different combinations for (a,b,c,d,e,f), we generate five different models:

To fix the proportion of outliers to α=0.1, each dataset had 900 ‘regular’ observations and 100 outliers. Outliers were generated uniformly in the p-parallelotope defined by the coordinate-wise maxima and minima of the ‘regular’ observations, accepting only those points with Mahalanobis squared distances greater than χ2p,0.995. Datasets either had equal cluster proportions (π1=π2=π3=1/3) or unequal proportions (π1=1/5,π2=π3=2/5). Ten datasets were generated with each combination of parameters (dimension, cluster proportions, model).

TCLUST was run using the tclust (Fritz et al., 2012) package in R (R Core Team, 2018) with outlier proportion set to α=0.1 and the eigenvalue restriction c=50. To compare OCLUST to TCLUST, outputs are compared when OCLUST is stopped at F=100. The accuracy of each method is described in Table 1, where the accuracy is defined as the proportion of generated outliers labelled as outliers by the algorithm. OCLUST and TCLUST perform with similar accuracy, returning a difference of less than one outlier on average, in every case but in Model V with p=2 and equal cluster proportions. This might be due to the overlapping nature of the generated clusters. However, it may be partly a result of the decision to stop OCLUST at F=100 for comparison with TCLUST—for this dataset, OCLUST tended to find a higher proportion of outliers (see Table 2).

To test OCLUST’s ability to predict the number of outliers, the algorithm was run with an upper bound F=125 (α=0.125). The prediction for the proportion of outliers returned by OCLUST is summarized in Table 2. It is important to note that α must be correctly specified in order for TCLUST to perform well. Under- or over-specification for α results in misclassification error, as shown in app:alpha. Crucially, OCLUST predicts α very well overall, with the true value for α

always falling within one standard deviation of the mean (Table

Lemma 1 assumes that the clusters are well separated and non-overlapping to simplify the model density to the component density. This section, however, serves to show that this assumption may be relaxed in practice. Following Qiu and Joe (2006), we can quantify the separation between clusters using the separation index J∗; in the univariate case,

As one would expect, the approximation of ℓX by QX improves as the separation index increases (see Lemma 1). However, the difference is negligible for touching and separated clusters (J∗≥0). In the simulations in Section 4, the most overlapping clusters have J∗=−0.09732371, which produces an error of less than 2% in two dimensions, and less than 0.6% in six dimensions. In this case, the approximation is appropriate.

Although covariance matrices need only be positive semi-definite, we restrict Σ to be positive definite so that X is not degenerate.

Appendix C The Effect of α on TCLUST Misclassification Error

TCLUST requires the proportion of outliers α to be specified in advance. fig:mist shows the average misclassification error when TCLUST is performed on Model I with p=2, over a range of values α∈[0.05,0.15]

α is specified correctly, but this is hard to do in practice, especially when p is not small.

This work was supported by an NSERC Undergraduate Research Award, the Canada Research Chairs program, and an E.W.R. Steacie Memorial Fellowship.