Using Known Information to Accelerate HyperParameters Optimization Based on SMBO 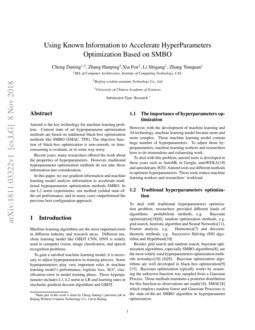 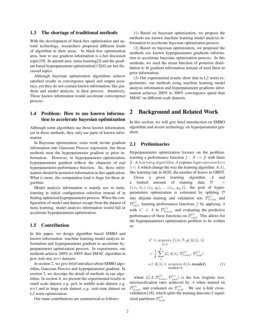 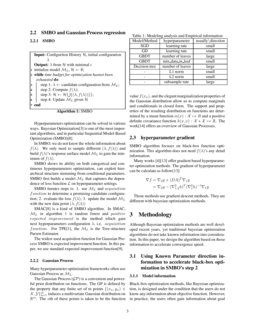 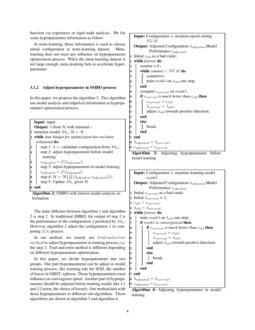 1.1 The importance of hyperparameters optimization

To deal with this problem, automl tools is developed in these years such as AutoML in Google, autoWEKA[18] and autosklearn, H2O. Automl tools use different methods to optimize hyperparameters. Those tools reduce machine learning workers and researchers’ workload.

which employs random forest and Gaussian Processes is the state-of-the-art SMBO algorithm in hyperparameter optimization.

1.3 The shortage of traditional methods

Although bayesian optimization algorithms achieve satisfied results in convergence speed and output accuracy, yet they do not contain known information, like gradient and model analysis, in their process. Intuitively, Those known information would accelerate convergence process.

1.4 Problem: How to use known information to accelerate bayesian optimization

In this paper, we design algorithm based SMBO and known information: machine learning model analysis information and hyperparameter gradient to accelerate hyperparameter optimization process. In experiments, our methods achieve 200% to 300% than SMAC algorithm in pc4, real-sim, rcv1 datasets.

In this section, we will give brief introduction on SMBO algorithm and recent technology on hyperparameter gradient.

, the goal of hyperparameters optimization is estimated by splitting

D into disjoint training and validation sets D(i)train and D(i)vail, learning performance functions f by applying A with λ∗∈Λ to D(i)train, and evaluating the predictive performance of these functions on D(i)vail. This allows for the hyperparameters optimization problem to be written as:

where L(A,D(i)train,D(i)vail) is the loss (logistic loss, misclassification rate) achieved by A when trained on D(i)train and evaluated on D(i)vail. We use k-fold cross-validation [18], which splits the training data into k equal-sized partitions D(i)vail

Hyperparameters optimization can be solved in various ways. Bayesian Optimization[3] is one of the most important algorithms, and in particular Sequential Model-Based Optimization (SMBO)[8].

In SMBO, we do not know the whole information about f(λ). We only need to sample different (λ,f(λ)) and build f(λ)’s response surface model ML to gain the minimum of f(λ).

that captures the dependence of loss function

SMBO iterates steps is: 1. use ML and acquisition function to determine a promising candidate configuration; 2. evaluate the loss f(λ); 3. update the model ML with the new data point (λ,f(λ))

SMAC[8] is a kind of SMBO algorithm. In SMAC, ML in algorithm 1 is random forest and positive expected improvement is the method which gain next hyperparameters configuration λ, i.e. acquisition function. For TPE[1], the ML is the Tree-structure Parzen Estimator.

Many hyperparameter optimization frameworks often use Gaussian Process as ML.

The Gaussian Process (GP) is a convenient and powerful prior distribution on functions. The GP is defined by the property that any finite set of m points {(xn,yn)∈X,Y}mn=1

induces a multivariate Gaussian distribution on

Rm. The nth of these points is taken to be the function value f(xn), and the elegant marginalization properties of the Gaussian distribution allow us to compute marginals and conditionals in closed form. The support and properties of the resulting distribution on functions are determined by a mean function m(x):X↦R and a positive definite covariance function k(x,x):X∗X↦R. The work[14] offers an overview of Gaussian Processes.

SMBO algorithm focuses on black-box function optimization. This algorithm does not need f(λ)’s any detail information.

Those methods use gradient descent methods. They are different with bayesian optimization methods.

In this paper, we propose the algorithm 2. This algorithm use model analysis and empirical information in hyperparameter optimization process.

L1 and L2 norm, the choice of kernels. Our method deal with those hyperparameter in different sub-algorithms. Those algorithms are shown in algorithm 3 and algorithm 4.

In practice, above two algorithms should be used sequentially, i.e. step 2 and step 3 in algorithm 2, because the hyperparameters adjusted in training, like learning rate, often exert influence on convergence speed. Different configurations should be compared at the same convergent degree.

3.1.4 The improvement of performance and stop condition

The influence of some hyperparameters to c are monotone function. For example, the fixed point of SGD is closer to minimum of objective function with learning rate’s decreasing. However, the increase of model performance would exacerbate the demand of resources and time[12]. It is non-meaningful to cost too much resource on minor performance improvement.

In practice, if the performance improvement is only 10%, we would stop the adjustment loop (Line 9 in algorithm 3 and line 8 in algorithm 4).

For majority of hyperparameters, the character is relatively simple and well-studied, figure 1, like learning rate for SGD [5] [20] and the number of leaves for GBDT[17]. It is easy to know the range which contains the best configuration.

Algorithm 2 samples more configurations λ and their performance in above range via adjusting configuration into positive direction. The ML would gain more information about this range, Figure 2. ML mainly fit this range which would reduce the cost of resource and gain a better result.

Many researchers proved the methods that compute the gradient of hyperparameter[13]. How to use gradient information into Bayesian optimization algorithms is one of the most hottest topic in machine learning area[19].

SMBO is one of Bayesian optimization algorithms which is designed for hyperparameter optimization. The most commonly used ML choices are random forest [8] and Gaussian Process [16]. However, random forest is hard to add gradient information.

In this section, we will show our gradient based Gaussian Process method.

When the gradient information can be computed, the SMBO history is

We introduce some notes and background before introducing our method. We set λ

is the vector whose dimension is

is the fitting function using kernel functions as basis. The variance function exhibits the distance between the predict point and observation point.

To implement the above base, the initial idea is to combine different kernels with different coefficient to fit following equation 4, 3. When the number of kernel is equal to the dimension of ∇f, the mean function can reflect all observed information, including point and gradient observed value.

Although RBF (radial basis functions) kernel satisfy all requriments in above section (like Polyharmonic spline functions), the computation load is still our concern. What is more, as we can see in Figure

1, the performance curve is not a smooth curve. The gradient reflect the local information instead of general trend of performance curve. Accurate gradient information and fitting brings negative influence in Gaussian Process regression and increases computation load. A appropriate Approximation is needed before running algorithm.

In our method, we approximate gradient information via reducing the number of kernel and use least square method to deal with gradient equation, i.e. equation 4.

The algorithm5 shows our method which uses 2 kernels. This algorithm is to solve following equation set.

For the final Gaussian Process, we expect the m(x) can present the character of observations, i.e. m(λi)=f(λi), ∇m(λi)≊∇f(λi).

The gradient information contains too much information in equ6( the dimension of ∇f≥2). which eq 6 is overdetermined equation in practice.

To solve above problem, we use equ 2 to find the least square solution (α,β) in sub-space consist of equ 3.

It is worth to note that it is worry to use least square method to solve equation 7, because the solution may escape the sub-space consist of equ 3.

In this paper, we compare the empirical performance of our method.

In this paper, we choose small dataset: pc4 in openml, middle dataset: rcv1 and large dataset in libsvm. The information of dataset is shown in table 2.

In our experiment, we will solve the problem that the regularization parameter in the L2 norm logistic regression model, because it is easy to gain the hyperparameter gradient of L2 norm. In this case, the loss function of the inner optimization problem, i.e.

The solver used for the inner optimization problem of the logistic regression problem is stochastic gradient descent[5]. In our problem, we set the search range is λ∈[0,1].

4.2.4 Comparison with other hyperparameter optimization methods

We now compare against other hyperparameter optimization methods. The methods against which we compare are:

Figure 3 shows the experimental results on pc4 dataset. In this case, our methods achieve the fastest convergence speed and find the best hyperparameter. The output from SMAC is the suboptimal. For the dataset scale is small, the character of performance curve in this case is unstable and multimodal function. HOAG shows a bad performance. The output of HOAG does not appear convergence.

Figure 4 shows the experimental results on rcv1 dataset. In this case, our methods achieve the fastest convergence speed and find the best hyperparameter. The character of performance curve in this case is relatively stable and close to unimodal function. The output from HOAG is the suboptimal. The output of SMAC is the almost to random search, because SMAC needs more sample points to build whole curve information.

Figure 5 shows the experimental results on real-sim dataset. In this case, HOAG and our methods achieve the fastest convergence speed and find the best hyperparameter.

Via the Analysis of the results from GradGP&Pos and GradGP&Pos0.2, we gain the conclusion about early stop condition that when the curve is unstable, the stop condition should be sensitive to the performance change.

In this paper, we use known information: machine learning model analysis information and hyperparameter gradient information to accelerate hyperparameter optimization process. In experiments, our methods achieve 200% to 300% than SMAC algorithm in pc4, real-sim, rcv1 datasets.