Using Graph Theory to Derive Inequalities for the Bell Numbers

The Bell numbers count the number of different ways to partition a set of n elements while the graphical Bell numbers count the number of non-equivalent partitions of the vertex set of a graph into stable sets. This relation between graph theory and integer sequences has motivated us to study properties on the average number of colors in the non-equivalent colorings of a graph to discover new non trivial inequalities for the Bell numbers. Example are given to illustrate our approach. 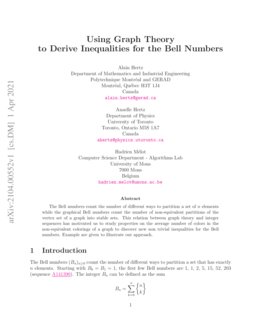 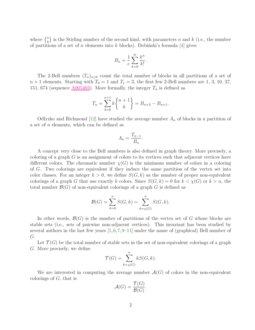 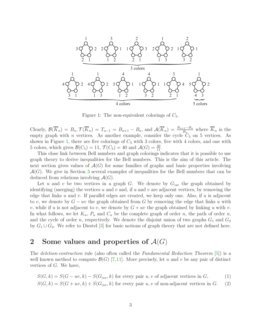 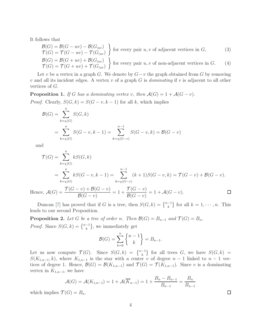 where {nk} is the Stirling number of the second kind, with parameters n and k (i.e., the number of partitions of a set of n elements into k blocks). Dobiński’s formula [4] gives

Odlyzko and Richmond [12] have studied the average number An of blocks in a partition of a set of n elements, which can be defined as

A concept very close to the Bell numbers is also defined in graph theory. More precisely, a coloring of a graph G is an assignment of colors to its vertices such that adjacent vertices have different colors. The chromatic number χ(G) is the minimum number of colors in a coloring of G. Two colorings are equivalent if they induce the same partition of the vertex set into color classes. For an integer k>0, we define S(G,k) as the number of proper non-equivalent colorings of a graph G that use exactly k colors. Since S(G,k)=0 for k<χ(G) or k>n, the total number B(G) of non-equivalent colorings of a graph G is defined as

In other words, B(G) is the number of partitions of the vertex set of G whose blocks are stable sets (i.e., sets of pairwise non-adjacent vertices). This invariant has been studied by several authors in the last few years [1, 6, 7, 9, 10, 11] under the name of (graphical) Bell number of G.

Let T(G) be the total number of stable sets in the set of non-equivalent colorings of a graph G. More precisely, we define

We are interested in computing the average number A(G) of colors in the non-equivalent colorings of G, that is

Let u and v be two vertices in a graph G. We denote by G∣uv the graph obtained by identifying (merging) the vertices u and v and, if u and v are adjacent vertices, by removing the edge that links u and v. If parallel edges are created, we keep only one. Also, if u is adjacent to v, we denote by G−uv the graph obtained from G by removing the edge that links u with v, while if u is not adjacent to v, we denote by G+uv the graph obtained by linking u with v. In what follows, we let Kn, Pn and Cn be the complete graph of order n, the path of order n, and the cycle of order n, respectively. We denote the disjoint union of two graphs G1 and G2 by G1∪G2. We refer to Diestel [3] for basic notions of graph theory that are not defined here.

2 Some values and properties of A(G)

The deletion-contraction rule (also often called the Fundamental Reduction Theorem [5]) is a well known method to compute B(G) [7, 11]. More precisely, let u and v be any pair of distinct vertices of G. We have,

Let v be a vertex in a graph G. We denote by G−v the graph obtained from G by removing v and all its incident edges. A vertex v of a graph G is dominating if v is adjacent to all other vertices of G.

For p=0, the result follows from Proposition 2. For larger values of p, we proceed by induction. Let T′ be the tree obtained from T by adding a new vertex u and linking it to exactly one vertex v in T. Equations (4) give

The proof for T(T∪pK1) is similar. ∎

Let Cn∪pK1 be the graph obtained from a cycle of order n≥3 by adding p isolated verices. Then

For p=0, the result follows from Proposition 4. For larger values of p, we proceed by induction. If n=3 then Equations (3) and Proposition (3) give

Hence, the result is valid for n=3. So assume n>3 and that the statement holds for smaller values of n:

The proof for T(Cn∪pK1) is similar. ∎

3 Inequalities for the Bell numbers

In this section, we show how to derive inequalities for the Bell numbers, using properties related to the average number A(G) of colors in non-equivalent colorings of G. We start by analyzing paths. As already mentioned, Pn∪pK1 is the graph obtained by adding p isolated vertices to a path on n vertices.

It follows from Equations (4) that

For p=0 and n≥1, Corollary 9 provides the following inequalities for the Bell numbers:

These inequalities also follow from Proposition 6. Indeed, Pn is obtained from Pn+1 by removing a vertex of degree 1, which implies

As a second example, assume p=1 and n≥1. Corollary 9 gives

For n≥3 and r≥0, we denote Hn,r the graph obtained by linking one extremity of Pr to one vertex of Cn (see Figure 2). Also, Hn,r∪pK1 is the graph obtained from Hn,r by adding p isolated vertices. We now compare A(H3,n−3∪pK1) with A(Pn+1∪pK1) to derive new inequalities involving the Bell numbers.

Let f(n,p) be the numerator of the above fraction. It follows from Proposition 3 that