Capsule networks have gained a lot of popularity in short time due to its unique approach to model equivariant class specific properties as capsules from images. However the dynamic routing algorithm comes with a steep computational complexity. In the proposed approach we aim to create scalable versions of the capsule networks that are much faster and provide better accuracy in problems with higher number of classes. By using dynamic routing to extract intermediate features instead of generating output class specific capsules, a large increase in the computational speed has been observed. Moreover, by extracting equivariant feature capsules instead of class specific capsules, the generalization capability of the network has also increased as a result of which there is a boost in accuracy. 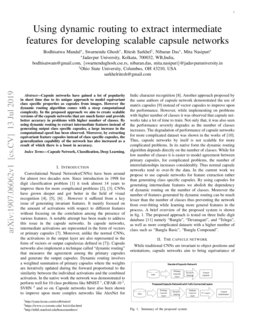 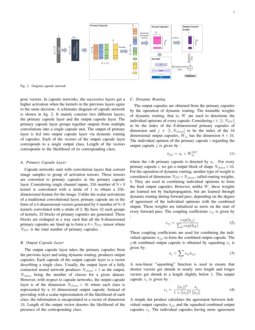 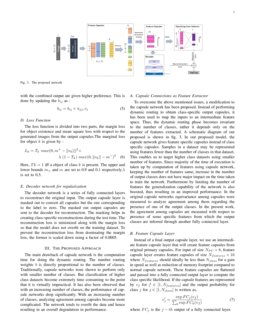 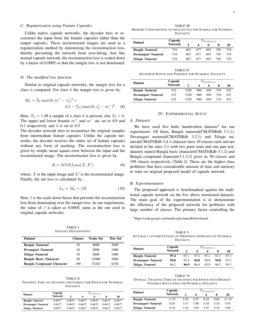 This paper presents an empirical exploration of the use of capsule netwo...
Jaeyoung Kim, et al. ∙

How to Accelerate Capsule Convolutions in Capsule Networks

How to improve the efficiency of routing procedures in CapsNets has been...
Zhenhua Chen, et al. ∙

Convolutional Neural Networks(CNNs) have been around for almost two decades now. Since introduction in 1998 for digit classification problem [1] it took almost 14 years to improve them for more complicated problems [2, 3]. CNNs have grown deeper and got better in the field of visual recognition [4, 5, 6]

. However it suffered from a key issue of generating invariant features. It mainly focused on the amount of activations with respect to different features without focusing on the correlation among the presence of various features. A notable attempt has been made to address this issue in the capsule networks. In capsule networks, intermediate activations are represented in the form of vectors or primary capsules

[7]. Moreover, unlike the normal CNNs, the activations in the output layer are also represented in the form of vectors or output capsules(as defined in [7]). Capsule networks also implement a technique called “dynamic routing” that measures the agreement among the primary capsules and generate the output capsules. Dynamic routing involves a weighted summation of primary capsules where the weights are iteratively updated during the forward proportional to the similarity between the individual activations and the combined activation. In the native work the network was demonstrated to perform well for 10 class problems like MNIST 111http://yann.lecun.com/exdb/mnist/, CIFAR-10 222https://www.cs.toronto.edu/ kriz/cifar.html, SVHN 333http://ufldl.stanford.edu/housenumbers/ and so on.

1. The proposed approach is tested on three Indic digit database [11] namely “Bangla”, “Devanagari”, and “Telugu”, as well as more complicated datasets with a higher number of class such as “Bangla Basic”, “Bangla Compound”.

kernel is convoluted with a stride of

where the i-th primary capsule is denoted by ui . For every primary capsule i, we get a output block of shape Nclass×16. For the operation of dynamic routing, another type of weight is considered of dimension NPC×Nclass, called routing weights, b. They are used in combining individual opinions to form the final output capsules. However, unlike W

cij is given by :

The loss function is divided into two parts, the margin loss for object existence and mean square loss with respect to the generated images from the output capsules.The marginal loss for object

To overcome the above mentioned issues, a modification to the capsule network has been proposed. Instead of performing dynamic routing to obtain class-specific output capsules, it has been used to map the inputs to an intermediate feature space. Thus, the dynamic routing phase becomes invariant to the number of classes, rather it depends only on the number of features extracted. A schematic diagram of our proposed is shown in fig. 3. In our proposed model, the capsule network gives feature specific capsules instead of class specific capsules. Samples in a dataset may be represented using features fewer than the number of classes in that dataset. This enables us to target higher class datasets using smaller number of features. Since majority of the time of execution is taken up by computation of features using capsule network, keeping the number of features same, increase in the number of output classes does not have major impact on the time taken to train the network. Furthermore by limiting the number of features the generalization capability of the network is also boosted, thus resulting in an improved performance. In the original capsule networks equivariance among capsules were measured to analyze agreement among them regarding the presence of one of the output classes. In the present work, the agreement among capsules are measured with respect to presence of some specific features from which the output classes are inferred through another fully connected layer.

and the output probability for class

where FCj is the j−th output of a fully connected layer.

Here, Tk=1 iff a sample of a class k is present, else Tk=0. The upper and lower bounds m+ and m− are set to 0.9 and 0.1 respectively and λ is set to 0.5 The decoder network tries to reconstruct the original samples from intermediate feature capsules. Unlike the capsule networks, the decoder recieves the entire set of feature capsules without any form of masking. The reconstruction loss is given by simple mean square error between the input and the reconstructed image. The reconstruction loss is given by,

where, X is the input image and X′ is the reconstructed image. Finally, the net loss is calculated by ,

Here β is the scale down factor that prevents the reconstruction loss from dominating over the margin loss. In our experiments, the value of β is taken as 0.0005, same as the one used in original capsule networks.

We have used five Indic handwritten datasets444https://code.google.com/archive/p/cmaterdb/downloads for our experiments. Of them, Bangla numeral(CMATERdb 3.1.1), Devanagari numeral(CMATERdb 3.2.1) and Telugu numeral(CMATERdb 3.4.1) datasets have 10 classes each and are divided in the ratio 2:1 with two parts train and one part test. datasets named Bangla basic character(CMATERdb 3.1.2) and Bangla compound character(3.1.3.3) gives us 50 classes and 199 classes respectively (Table I). These are the higher class problems that have considerable amount of time and memory to train on original proposed model of capsule network.

The proposed approach is benchmarked against the traditional capsule network on the five above mentioned datasets. The main goal of the experimentation is to demonstrate the efficiency of the proposed network for problems with large number of classes. The primary factor controlling the performance for the proposed approach is the number of features which is previously represented as Nfeatures. The three numeral datasets namely Bangla, Devanagari and Telugu have 10 classes each. We have measured the performance of the proposed approach for Nfeatures∈[2,4,6,8,10]. There was no point going higher than 10 because as the speed of computation starts to drop below the speed traditional capsule networks as Nfeatures exceeds Nclass. For the higher class datasets such as the Bangla basic characters or Bangla compound characters, the proposed approach is tested for Nfeatures∈[2,4,6,8,10,15,20]. The proposed network started to show saturation towards for Nfeatures higher than 20. The model with best training performance was saved and performance of the model on the test set has been reported. Separate validation set was not used because dedicated regularization techniques are already implemented in the process. Along with accuracy, many other factors are also measured corresponding to the time and memory consumption of the network. All the experiments were conducted using a Nvidia GeForce GTX 1080ti(11GB).

The first set of experiments show the performance of the network for numeral datasets. Though there is not much improvement in terms of accuracy (Table V), the overall training time has been greatly reduced (Table VI).

While the proposed network itself reduces the computational time for each sample (Table II), the major speedup comes from the decrease in the memory consumption (Table III). With a lower memory consumption it is possible to train the network with a higher batch size (Table IV).

The second set of experiments represents the scalability of the model. The proposed network is run on two datasets with higher number of classes namely, Bangla basic characters with 50 classes and Bangla compound character with 199 classes. The proposed model obtained a much better accuracy (Table X) for both cases with a much lesser training time (Table XI).

The training time for individual samples per epoch (Table VII) shows a trend similar to the numeric datasets. Thus providing some boost in time consumption over basic capsule networks. However, the real benefit is in terms of the GPU memory consumption (Table VIII). Unlike capsule networks where the memory consumption increases with the increasing number of classes, the proposed method is immune to the problem. Because the dynamic routing for a fixed dimension of features is independent of the number of classes, the memory consumption is almost identical. The only increase in memory is due to the last fully connected layer from the feature capsules to the output layer, however the difference is negligible with respect to the overall consumption. For example, for a 10-dimensional feature capsules, extra memory requirement for the last fully connected layer for digit datasets would be 0.006 MiB, for Bangla basic dataset it is 0.031 MiB, and for Bangla compound character dataset it is 0.123 MiB. Hence it can be seen the difference is insignificant with respect to the total consumption. This allows the use of same batch size accross all datasets with different number of classes (Table IX).

In several occassions we can see in table XII the proposed approach beating the classic capsule networks. The difference is more prominent for problems with higher number of classes like Bangla Basic and Bangla Compound Characters

One of the primary concerns of capsule network is its poor scalability for problems of larger classes. In our approach we have shown how capsule networks can be used to extract feature specific capsules rather than class specific capsules. Through this method a considerable boost has been demonstrated in terms of overall training time per epoch. Moreover the memory requirements of the proposed network is independent of the number of classes, thus allowing networks to be trained using a much higher number of batches and which provides a much more efficient implementation of the parallelization capabilities of a GPU. Agreement among capsule become much more complicated for higher class problems. Thus the normal capsule network tend to overfit the data. By generating intermediate features of lower dimensions, a more generalized learning environment is created. This results in an improvement in accuracy for higher class problems. The proposed network beats many other popular works on the current Indic datasests. In future, more analysis needs to be carried out regarding the effect of feature capsule on the concept of equivariance. Moreover, since reconstruction is carried out based on entire set of feature capsules, class specific reconstruction is not possible and hence provides another avenue to expand the work.

This work is partially supported by the project order no. SB/S3/EECE/054/2016, dated 25/11/2016, sponsored by SERB (Government of India) and carried out at the Centre for Microprocessor Application for Training Education and Research, CSE Department, Jadavpur University.