Discriminating lexical relations among distributionally similar words has always been a challenge for natural language processing (NLP) community. In this paper, we investigate whether the network embedding of distributional thesaurus can be effectively utilized to detect co-hyponymy relations. By extensive experiments over three benchmark datasets, we show that the vector representation obtained by applying node2vec on distributional thesaurus outperforms the state-of-the-art models for binary classification of co-hyponymy vs. hypernymy, as well as co-hyponymy vs. meronymy, by huge margins. 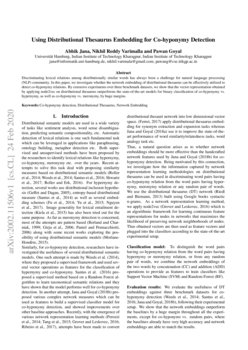 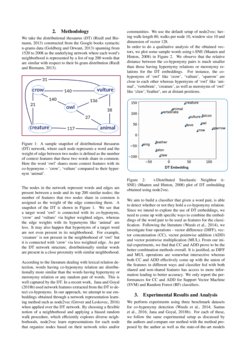 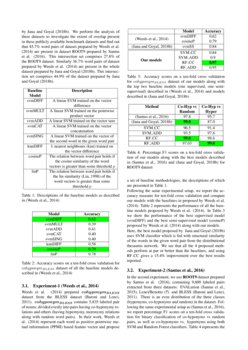 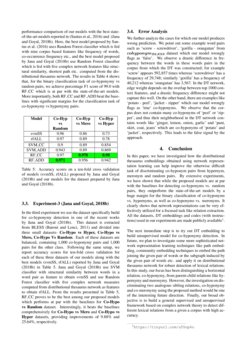 Improving Hypernymy Detection with an Integrated Path-based and Distributional Method

Detecting hypernymy relations is a key task in NLP, which is addressed i...
Vered Shwartz, et al. ∙

Distributional semantic models are used in a wide variety of tasks like sentiment analysis, word sense disambiguation, predicting semantic compositionality, etc. Automatic detection of lexical relations is one such fundamental task which can be leveraged in applications like paraphrasing, ontology building, metaphor detection etc. Both supervised and unsupervised methods have been proposed by the researchers to identify lexical relations like hypernymy, co-hyponymy, meronymy etc. over the years. Recent attempts to solve this task deal with proposing similarity measures based on distributional semantic models

Thus, a natural question arises as to whether network embeddings should be more effective than the handcrafted network features used by JANA18.78 for co-hyponymy detection. Being motivated by this connection, we investigate how the information captured by network representation learning methodologies on distributional thesaurus can be used in discriminating word pairs having co-hyponymy relation from the word pairs having hypernymy, meronymy relation or any random pair of words. We use the distributional thesaurus (DT) network [Riedl and Biemann2013]

[Grover and Leskovec2016] which is an algorithmic framework for learning continuous feature representations for nodes in networks that maximizes the likelihood of preserving network neighborhoods of nodes. Thus obtained vectors are then used as feature vectors and plugged into the classifiers according to the state-of-the-art experimental setup.

Evaluation results: We evaluate the usefulness of DT embeddings against three benchmark datasets for co-hyponymy detection [Weeds et al.2014, Santus et al.2016, Jana and Goyal2018b], following their experimental setup. We show that the network embeddings outperform the baselines by a huge margin throughout all the experiments, except for co-hyponyms vs. random pairs, where the baselines already have very high accuracy and network embeddings are able to match the results.

The nodes in the network represent words and edges are present between a node and its top 200 similar nodes; the number of features that two nodes share in common is assigned as the weight of the edge connecting them. A snapshot of the DT is shown in Figure 1. We see that a target word ‘owl’ is connected with its co-hyponyms, ‘crow’ and ‘vulture’ via higher weighted edges, whereas the edge weights with its hypernyms like ‘animal’ are less. It may also happen that hypernyms of a target word are not even present in its neighborhood. For example, ‘creature’ is not present in the neighborhood of ‘owl’ but it is connected with ‘crow’ via less weighted edge. As per the DT network structure, distributionally similar words are present in a close proximity with similar neighborhood.

According to the literature dealing with lexical relation detection, words having co-hyponymy relation are distributionally more similar than the words having hypernymy or meronymy relation or any random pair of words. This is well captured by the DT. In a recent work,  JANA18.78 used network features extracted from the DT to detect co-hyponyms. In our approach, we attempt to use embeddings obtained through a network representation learning method such as node2vec

[Grover and Leskovec2016] when applied over the DT network. By choosing a flexible notion of a neighborhood and applying a biased random walk procedure, which efficiently explores diverse neighborhoods, node2vec learn representations for each node that organize nodes based on their network roles and/or communities. We use the default setup of node2vec; having walk-length 80, walks per node 10, window size 10 and dimension of vector 128.

We aim to build a classifier that given a word pair, is able to detect whether or not they hold a co-hyponymy relation. Since we intend to explore the use of DT embeddings, we need to come up with specific ways to combine the embeddings of the word pair to be used as features for the classification. Following the literature [Weeds et al.2014], we investigate four operations - vector difference (DIFF), vector concatenation (CC), vector pointwise addition (ADD) and vector pointwise multiplication (MUL). From our initial experiments, we find that CC and ADD prove to be the better combination methods overall. It is justified, as DIFF and MUL operations are somewhat intersective whereas both CC and ADD effectively come up with the union of the features in different ways and classifier fed with both shared and non-shared features has access to more information leading to better accuracy. We only report the performances for CC and ADD for Support Vector Machine (SVM) and Random Forest (RF) classifiers.

weeds2014learning prepared cohyponymBLESS dataset from the BLESS dataset [Baroni and Lenci2011]. cohyponymBLESS contains 5,835 labeled pair of nouns; divided evenly into pairs having co-hyponymy relations and others (having hypernymy, meronymy relations along with random word pairs). In their work, weeds2014learning represent each word as positive pointwise mutual information (PPMI) based feature vector and propose a set of baseline methodologies, the descriptions of which are presented in Table 1.

Here, the best model proposed by  JANA18.78 uses SVM classifier which is fed with structural similarity of the words in the given word pair from the distributional thesaurus network. We see that all the 4 proposed methods perform at par or better than the baselines, and using RF_CC gives a 15.4% improvement over the best results reported.

In the second experiment, we use ROOT9 dataset prepared by SANTUS16.455, containing 9,600 labeled pairs extracted from three datasets: EVALution [Santus et al.2015], Lenci/Benotto [benotto2015distributional] and BLESS [Baroni and Lenci2011]. There is an even distribution of the three classes (hypernyms, co-hyponyms and random) in the dataset. Following the same experimental setup as [Santus et al.2016], we report percentage F1 scores on a ten-fold cross validation for binary classification of co-hyponyms vs random pairs, as well as co-hyponyms vs. hypernyms using both SVM and Random Forest classifiers. Table 4 represents the performance comparison of our models with the best state-of-the-art models reported in [Santus et al.2016] and  [Jana and Goyal2018b]. Here, the best model proposed by SANTUS16.455 uses Random Forest classifier which is fed with nine corpus based features like frequency of words, co-occurrence frequency etc., and the best model proposed by JANA18.78 use Random Forest classifier which is fed with five complex network features like structural similarity, shortest path etc. computed from the distributional thesaurus network. The results in Table 4 shows that, for the binary classification task of co-hyponymy vs random pairs, we achieve percentage F1 score of 99.0 with RF_CC which is at par with the state-of-the-art models. More importantly, both RF_CC and RF_ADD beat the baselines with significant margins for the classification task of co-hyponymy vs hypernymy pairs.

In the third experiment we use the dataset specifically build for co-hyponymy detection in one of the recent works by JANA18.78. This dataset is extracted from BLESS [Baroni and Lenci2011] and divided into three small datasets- Co-Hypo vs Hyper, Co-Hypo vs Mero, Co-Hypo Vs Random. Each of these datasets are balanced, containing 1,000 co-hyponymy pairs and 1,000 pairs for the other class. Following the same setup, we report accuracy scores for ten-fold cross validation for each of these three datasets of our models along with the best models (svmSS, rfALL) reported by JANA18.78 in Table 5. JANA18.78 use SVM classifier with structural similarity between words in a word pair as feature to obtain svmSS and use Random Forest classifier with five complex network measures computed from distributional thesaurus network as features to obtain rfALL. From the results presented in Table 5, RF_CC proves to be the best among our proposed models which performs at par with the baselines for Co-Hypo vs Random dataset. Interestingly, it beats the baselines comprehensively for Co-Hypo vs Mero and Co-Hypo vs Hyper datasets, providing improvements of 9.88% and 25.64%, respectively.

We further analyze the cases for which our model produces wrong prediction. We point out some example word pairs such as ‘screw - screwdriver’, ‘gorilla - orangutan’ from cohyponymBLESS dataset which our model wrongly flags as ‘false’. We observe a drastic difference in frequency between the words in these words pairs in the corpus from which the DT was constructed; for example ‘screw’ appears 592,857 times whereas ‘screwdriver’ has a frequency of 29,748; similarly ‘gorilla’ has a frequency of 40,212 whereas ‘orangutan’ has 3,567. In the DT network, edge weight depends on the overlap between top 1000 context features, and a drastic frequency difference might not capture this well. On the other hand, there are examples like ‘potato - peel’, ‘jacket - zipper’ which our model wrongly flags as ‘true’ co-hyponyms. We observe that the corpus does not contain many co-hyponyms of ‘peel’ or ‘zipper’, and thus their neighborhood in the DT network contains words like ‘ginger, lemon, onion, garlic’ and ‘pant, skirt, coat, jeans’ which are co-hyponyms of ‘potato’ and ‘jacket’, respectively. This leads to the false signal by the approach.

In this paper, we have investigated how the distributional thesaurus embeddings obtained using network representation learning can help improve the otherwise difficult task of discriminating co-hyponym pairs from hypernym, meronym and random pairs. By extensive experiments, we have shown that while the proposed models are at par with the baselines for detecting co-hyponyms vs. random pairs, they outperform the state-of-the-art models by a huge margin for the binary classification of co-hyponyms vs. hypernyms, as well as co-hyponyms vs. meronyms. It clearly shows that network representations can be very effectively utilized for a focused task like relation extraction. All the datasets, DT embeddings and codes (with instructions) used in our experiments are made publicly available111https://tinyurl.com/u55np6o.

The next immediate step is to try out DT embedding to build unsupervised model for co-hyponymy detection. In future, we plan to investigate some more sophisticated network representation learning techniques like path embedding, community embedding techniques to embed the path joining the given pair of words or the subgraph induced by the given pair of words etc. and apply it on distributional thesaurus network for robust detection of lexical relations. In this study, our focus has been distinguishing a horizontal relation, co-hyponymy, from parent-child relations like hypernymy and meronymy. However, the investigation on discriminating two analogous sibling relations, co-hyponymy and co-meronymy using the proposed method would be one of the interesting future direction. Finally, our broad objective is to build a general supervised and unsupervised framework based on complex network theory to detect different lexical relations from a given a corpus with high accuracy.

This research was supported by the Deutsche Forschungsgemeinschaft (DFG) under the project “Joining Ontologies and Semantics Induced from Text” (JOIN-T 2, BI 1544/4-2, PO 1900/1-2).