Automatically recognizing surgical gestures is a crucial step towards a thorough understanding of surgical skill. Possible areas of application include automatic skill assessment, intra-operative monitoring of critical surgical steps, and semi-automation of surgical tasks. Solutions that rely only on the laparoscopic video and do not require additional sensor hardware are especially attractive as they can be implemented at low cost in many scenarios. However, surgical gesture recognition based only on video is a challenging problem that requires effective means to extract both visual and temporal information from the video. Previous approaches mainly rely on frame-wise feature extractors, either handcrafted or learned, which fail to capture the dynamics in surgical video. To address this issue, we propose to use a 3D Convolutional Neural Network (CNN) to learn spatiotemporal features from consecutive video frames. We evaluate our approach on recordings of robot-assisted suturing on a bench-top model, which are taken from the publicly available JIGSAWS dataset. Our approach achieves high frame-wise surgical gesture recognition accuracies of more than 84 spatial features or model spatial and low-level temporal information separately. For the first time, these results demonstrate the benefit of spatiotemporal CNNs for video-based surgical gesture recognition. 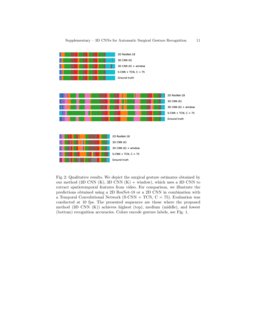 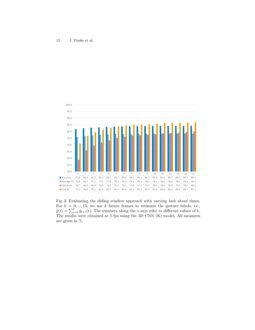 Especially appealing is the exploitation of ubiquitous video feeds for surgical gesture recognition, such as the feed of the laparoscopic camera, which displays the surgical field in conventional and robot-assisted minimally invasive surgery. The problem of video-based surgical gesture recognition is formalized as follows: A video of length T is a sequence of video frames vt,t=1,...,T. The problem is to predict the gesture g(t)∈G performed at time t for each t=1,...,T, where G={1,...,G}

The main challenge in video-based surgical gesture recognition is the high dimensionality, high level of redundancy, and high complexity of video data. State-of-the-art methods tackle the problem by transforming video frames into feature representations, which are fed into temporal models that infer the sequence of gestures based on the input sequence. These temporal models have been continuously improved in the last years, starting with variants of Hidden Markov Models

S-CNN) for frame-wise gesture recognition [9] and use the latent video frame encodings as feature representations, which are further processed by a TCN for gesture recognition [10]. A TCN combines 1D convolutional filters with pooling and channel-wise normalization layers to hierarchically capture temporal relationships at low-, intermediate-, and high-level time scales. Features extracted from individual video frames cannot represent the dynamics in surgical video, i.e., changes between adjacent frames. To alleviate this problem, Lea et al. [10] propose adding a number of difference images to the input fed to the S-CNN. For timestep t, difference images are calculated within a window of 2 seconds around frame vt. Also, they suggest to use a spatiotemporal CNN (ST-CNN) [9], which applies a large temporal 1D convolutional filter to the latent activations obtained by a S-CNN. In contrast, we propose to use a 3D CNN to learn spatiotemporal features from stacks of consecutive video frames, thus modeling the temporal evolution of video frames directly. To the best of our knowledge, we are the first to design a 3D CNN for surgical gesture recognition that predicts gesture labels for consecutive frames of surgical video. An evaluation on the suturing task of the publicly available JIGSAWS [1] dataset demonstrates the superiority of our approach compared to 2D CNNs that estimate surgical gestures based on spatial features extracted from individual video frames. Averaging the dense predictions of the 3D CNN over time even achieves compelling frame-wise gesture recognition accuracies of over 84%. Source code can be accessed at https://gitlab.com/nct_tso_public/surgical_gesture_recognition.

In the following, we detail the architecture and training procedure of the proposed 3D CNN for video-based surgical gesture recognition.

The proposed 3D CNN for surgical gesture recognition is based on 3D ResNet-18 [4], which is created by inflating an 18-layer residual network [5]. Input to the network are stacks of 16 consecutive video frames (as proposed in [4]) with a resolution of 224×224 pixels. More precisely, to obtain an estimate ^g(t) of the gesture being performed at time t, we feed the video snippet ϑt=(vt−15,...,vt−1,vt) to the network. Because we process the video at 5 fps, the network can refer to the previous three seconds of video in order to infer ^g(t). At this point, we abstain from feeding future video frames to the network so that the method is applicable for online gesture recognition.

The original 3D ResNet-18 architecture is designed to predict one distinct action label per video snippet using a one-hot encoding. In contrast, surgical gesture recognition is a dense labeling problem, where each frame

vk of a video snippet has a distinct label g(k). This means that one video snippet may contain frames that belong to different gestures. To account for this, we adapt our network to output dense gesture label estimates ^γt=(^gt(t−15),...,^gt(t−1),^gt(t))∈RG×16. Here, G denotes the number of distinct surgical gestures. The component ^gt(t−i),i=0,...,15, of ^γt is the estimate for gesture label g(t−i), obtained at time t.

Specifically, we adapt the max pooling layer of 3D ResNet-18 so that downsampling is only performed along the spatial dimensions. Thus, the feature maps after the final average pooling layer have a dimension of

512×2. This is upsampled to the output dimension G×16 using a transposed 1D convolution (convT

An overview of the network architecture is given in table 1. The input is downsampled in the initial convolutional and max pooling layers and then passed through a number of residual blocks. When convolutions are applied with stride 2 to downsample feature maps, the number of feature maps is doubled. For details on residual blocks, please see the original papers [4, 5]

. We apply batch normalization and the ReLU non-linearity after each convolutional layer. An exception is the final transposed convolution, which is normalized using a softmax layer.

Because of their large number of parameters, 3D CNNs are difficult to train, especially on small datasets [4]. Thus, it is important to begin training from a suitable initialization of network parameters. We investigate two approaches for network initialization: Initializing the network with parameters obtained by training on Kinetics [2], one of the largest human action datasets available so far. For this, a publicly available pretrained 3D ResNet-18 model111https://github.com/kenshohara/3D-ResNets-PyTorch#pre-trained-models [4] is used.

Bootstrapping network parameters from an ImageNet-pretrained 2D ResNet-18 model that was further trained on individual video frames to perform frame-wise gesture recognition. As described in

[2], the 3D filters of the 3D ResNet-18 are initialized by repeating the weights of the corresponding 2D filters N times along the temporal dimension and then dividing them by N. During training, we sample video snippets ϑt at random temporal positions t

from the training videos. Per epoch, we sample about 3000 snippets in a class-balanced manner, which means that we ensure that each gesture

g∈G is represented equally in the set of sampled snippets. For data augmentation, we use scale jittering and corner cropping as proposed in [14]. Here, all frames within one training snippet are augmented in the same manner. We train the 3D CNN for 250 epochs using the Adam [7] optimizer with a batch size of 32 and an initial learning rate of 2.5⋅10−4. The learning rate is divided by factor 5 every 50 epochs. Our 3D CNN implementation is based on code222https://github.com/kenshohara/3D-ResNets-PyTorch provided by [4].

We evaluate our approach on 39 videos of robot-assisted suturing tasks performed on a bench-top model, which are taken from the JHU-ISI Gesture and Skill Assessment Working Set (JIGSAWS) [1]. The recorded tasks were performed by eight participants with varying surgical experience. The videos were annotated with surgical gestures such as positioning the tip of the needle or pushing needle through the tissue. In total, G=10 different gestures are used. We follow the leave-one-user-out (LOUO) setup for cross-validation as defined in [1]. Thus, for each experiment, we train one model per left-out user.

We report the following evaluation metrics:

Frame-wise accuracy, i.e., the ratio of correctly predicted gesture labels in a video. Average F1 score, where we calculate the F1

score, i.e., the harmonic mean of precision and recall, with respect to each gesture class and average the results over all classes.

As can be seen in table 2, the proposed variant of 3D ResNet-18 for snippet-wise gesture recognition yields comparable or better frame-wise evaluation results (accuracy and average F1) and considerably better segment-based evaluation results (edit score and F1@10) compared to the 2D counterpart. This demonstrates the benefit of modeling several consecutive video frames to capture the temporal evolution of video.

Minor differences can be observed between both network initialization variants, Kinetics pretraining (K) and 2D weight bootstrapping (B): while pretraining on Kinetics yields higher frame-wise accuracies, the other approach yields better gesture segments. In combination with the sliding window the differences are marginal.

When testing at 10 fps instead of 5 fps, we observe a notable degradation of the segment-based measures for both the 2D ResNet-18 and the 3D variants. Most likely, the high evaluation frequency enhances noise in the gesture predictions, which is penalized by the edit score and the F1@10 metric. For the 3D CNNs, this effect can be alleviated by filtering with the sliding window.

Compared to the ST-CNN, the 3D CNN yields considerably better results with regards to all evaluation metrics when being evaluated with the sliding window approach. Apparently, for the given task, modeling spatiotemporal features in video snippets achieves better results than modeling spatial and temporal information separately, as is the case for the ST-CNN.

In combination with the sliding window, the proposed 3D CNN also outperforms the state-of-the-art methods S-CNN + TCN and S-CNN + TCN + Deep RL in terms of accuracy and average F1. These methods apply very long temporal filters while the proposed approach only processes a few seconds of video to estimate the current gesture. Thus, it is surprising that the quality of gesture segments, as measured by edit score and F1@10, is almost equal.

Note that the proposed method operates with a delay of only 3 seconds and can therefore provide information, such as feedback in a surgical training scenario, in a more timely manner than methods with a longer look ahead time.

We present a 3D CNN to predict dense gesture labels for surgical video. The conducted experiments demonstrate the benefits of using an inherently spatiotemporal model to extract features from consecutive video frames. Future work will investigate options for combining spatiotemporal feature extractors with models that capture high-level temporal dependencies, such as LSTMs or TCNs.

The authors thank Colin Lea for sharing code and precomputed S-CNN features to reproduce results from [10] as well as the Helmholtz-Zentrum Dresden-Rossendorf (HZDR) for granting access to their GPU cluster.