A new machine learning (ML) technique termed as federated learning (FL) aims to preserve data at the edge devices and to only exchange ML model parameters in the learning process. FL not only reduces the communication needs but also helps to protect the local privacy. Although FL has these advantages, it can still experience large communication latency when there are massive edge devices connected to the central parameter server (PS) and/or millions of model parameters involved in the learning process. Over-the-air computation (AirComp) is capable of computing while transmitting data by allowing multiple devices to send data simultaneously by using analog modulation. To achieve good performance in FL through AirComp, user scheduling plays a critical role. In this paper, we investigate and compare different user scheduling policies, which are based on various criteria such as wireless channel conditions and the significance of model updates. Receiver beamforming is applied to minimize the mean-square-error (MSE) of the distortion of function aggregation result via AirComp. Simulation results show that scheduling based on the significance of model updates has smaller fluctuations in the training process while scheduling based on channel condition has the advantage on energy efficiency. 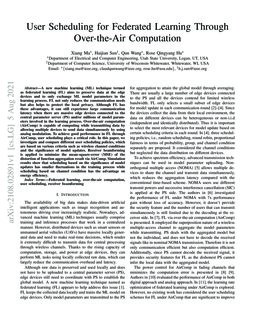 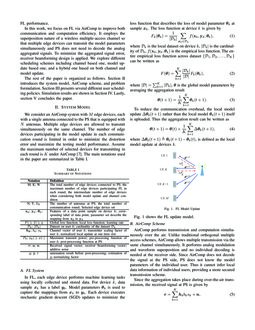 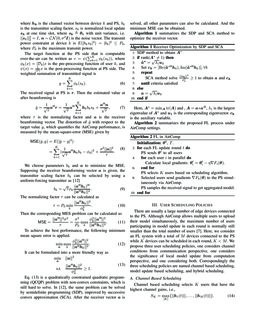 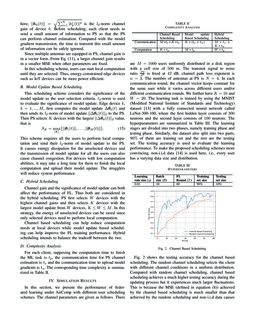 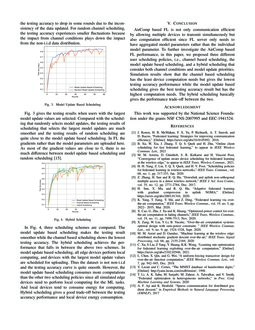 The availability of big data makes data-driven artificial intelligent applications such as image recognition and autonomous driving ever increasingly realistic. Nowadays, advanced machine learning (ML) techniques usually comprise training and inference processes that work in a centralized manner. However, distributed devices such as smart sensors or unmanned aerial vehicles (UAVs) have massive locally generated data and need to make real-time decisions, which render it extremely difficult to transmit data for central processing through wireless channels. Thanks to the rising capacity of computation, storage, and power at edge devices, they can perform ML tasks using locally collected raw data, which can largely reduce the communication overhead and latency.

Although raw data is preserved and used locally and does not have to be uploaded to a central parameter server (PS), edge devices still need to coordinate with PS to establish the global model. A new machine learning technique named as federated learning (FL) appears to help address this issue [1]. FL keeps the collected data locally and trains the ML model on edge devices. Only model parameters are transmitted to the PS for aggregation to attain the global model through averaging. There are usually a large number of edge devices connected to the PS and all the devices contend for limited wireless bandwidth. FL only selects a small subset of edge devices for model update in each communication round [2, 3, 4]. Since the devices collect the data from their local environment, the data on different devices can be heterogeneous or non-i.i.d (independent and identically distributed). Thus it is important to select the most relevant devices for model update based on certain scheduling criteria in each round. In [4]

To achieve spectrum efficiency, advanced transmission techniques can be used in model parameter uploading. Non-orthogonal multiple access (NOMA) [5] allows multiple devices to share the channel and transmit data simultaneously, which reduces the aggregation latency compared with the conventional time-based scheme. NOMA users use different transmit powers and successive interference cancellation (SIC) is applied at the PS side. The authors in [6] investigated the performance of FL under NOMA with 7x performance gain without loss of accuracy. However, it doesn’t provide the security feature and the number of users that can transmit simultaneously is still limited due to the decoding at the receiver side. In [7], FL via over-the-air computation (AirComp) is presented. It employed the superposition nature of a wireless multiple-access channel to aggregate the model parameters while transmitting. PS deals with the aggregated model but not the individual, and does not have to decode the received signals like in nominal NOMA transmission. Therefore it is not only communication efficient but also computation efficient. Additionally, since PS cannot decode the received signal, it provides security features for FL as the dishonest PS cannot infer the local data with the aggregated model.

The power control for AirComp in fading channels that minimizes the computation error is presented in [8] [9]. Authors in [10] evaluated the performance of AirComp in both digital approach and analog approach. In [11], the learning rate optimization of federated learning under AirComp is explored. However, no existing work has considered the user scheduling schemes for FL under AirComp that are significant to improve FL performance.

In this work, we focus on FL via AirComp to improve both communication and computation efficiency. It employs the superposition nature of a wireless multiple-access channel so that multiple edge devices can transmit the model parameters simultaneously and PS does not need to decode the analog aggregated signals. To minimize the aggregated signal error, receiver beamforming design is applied. We explore different scheduling schemes including channel based one, model update based one, and a hybrid one based on both channel and model update.

We consider an AirComp system with M edge devices, each with a single antenna connected to the PS that is equipped with N antennas. Multiple edge devices are allowed to transmit simultaneously on the same channel. The number of edge devices participating in the model update in each communication round is limited in order to minimize the distortion error and maximize the testing model performance. Assume the maximum number of selected devices for transmitting in each round is K under AirComp[7]. The main notations used in the paper are summarized in Table I.

. Each device executes stochastic gradient descent (SGD) updates to minimize the loss function that describes the loss of model parameter

θk at sample xk. The loss function at device k is given by

where |D|=∑Kk=1|Dk|, θ is the global model parameters by averaging the aggregation result

To reduce the communication overhead, the local model update Δθk(t+1) rather than the local model θk(t+1) itself is uploaded. Thus the aggregation result can be written as

where Δθk(t+1)≜θk(t+1)−θk(t), is defined as the local model update at devices k.

AirComp performs transmission and computation simultaneously over the air. Unlike traditional orthogonal multiple access schemes, AirComp allows multiple transmission via the same channel simultaneously. It performs analog modulation and waveform superposition and no individual decoding is needed at the receiver side. Since AirComp does not decode the signal at the PS side, PS does not know the model parameters of the individual user. Thus it cannot infer local data information of individual users, providing a more secured transmission scheme.

Since the aggregation takes place during over-the-air transmission, the received signal at PS is given by

where hk is the channel vector between device k and PS, bk is the transmitter scaling factor, sk is normalized local update sk at one time slot, where sk≜θk

The received signal at PS is r. Then the estimated value at after beamforming is

where τ is the normalizing factor and a is the receiver beamforming vector. The distortion of ^g with respect to the target value g, which quantifies the AirComp performance, is measured by the mean-square-error (MSE) given by

We choose parameters bk and a to minimize the MSE. Supposing the receiver beamforming vector a is given, the transmitter scaling factor bk can be selected by using a uniform-forcing transmitter as [12]

The normalizing factor τ can be calculated as

Then the corresponding MES problem can be calculated as

To achieve the best performance, the following minimum mean square error is applied.

It can be formulated into a more friendly way as

Eq. (13) is a quadratically constrained quadratic programming (QCQP) problem with non-convex constraints, which is still hard to solve. In [12], the same problem can be solved by semidefinite programming (SDP), improved by successive convex approximation (SCA). After the receiver vector a is solved, all other parameters can also be calculated. And the minimum MSE can be obtained.

Algorithm 1 summarizes the SDP and SCA method to optimize the receiver vector.

is the largest eigenvalue of

is the corresponding eigenvector.

ck is the auxiliary variable.

There are usually a large number of edge devices connected to the PS. Although AirComp allows multiple users to upload their model simultaneously, the maximum number of users participating in model update in each round is normally still smaller than the total number of users [7]. Here, we consider an FL system with a total of M devices connected to the PS while K devices can be scheduled in each round, K<M. We propose three user scheduling policies, one considers channel conditions from communication perspective, one considers the significance of local model update from computation perspective, and one considering both. Correspondingly the three scheduling policies are named channel based scheduling, model update based scheduling, and hybrid scheduling.

Channel based scheduling selects K users that have the highest channel gains, i.e.,

Since multiple antennas are equipped in PS, channel gain is in a vector form. From Eq. (11), a larger channel gain results in a smaller MSE when other parameters are fixed.

In this scheduling scheme, users can start local computation until they are selected. Thus, energy-constrained edge devices such as IoT devices can be more power efficient.

Channel gain and the significance of model update can both affect the performance of FL. Thus both are considered in the hybrid scheduling. PS first selects W devices with the highest channel gains and then selects K devices with the largest model update from W devices, K≤W≤M. In this strategy, the energy of unselected devices can be saved since only selected devices need to perform local computation.

In this section, we present the performance of federated learning under AirComp with different user scheduling schemes. The channel parameters are given as follows. There are M=1000

P0σ2 is fixed at 42 dB, channel path loss exponent is α=3. The number of antennas at PS is N=4. In each communication round, the channel vector keeps constant for the same user while it varies across different users and/or different communication rounds. We further have K=10 and W=20

. The learning task is trained by using the MNIST (Modified National Institute of Standards and Technology) dataset

with a fully connected neural network called LeNet-300-100, where the first hidden layer consists of

300neurons and the second layer consists of 100

neurons. The hyperparameters are summarized in Table

III. The learning stages are divided into two phases, namely training phase and testing phase. Similarly, the dataset also split into two parts, 90% of them are training set and the rest are the testing set. The testing accuracy is used to evaluate the learning performance. To make the proposed scheduling schemes more convincing, non-i.i.d data [14] is used here, i.e., every user has a varying data size and distribution.

This work was supported by the National Science Foundation under the grants NSF CNS-2007995 and EEC-1941524.