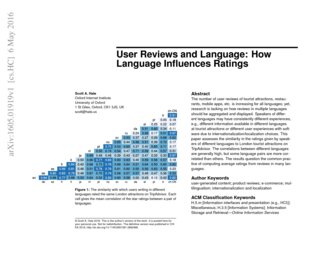 The amount of content online in different languages is greatly increasing, and the early days of English-language dominance on the Web have given way to language pluralism online. For many large user-generated content platforms, less than half the content is in English [8, 9] and many users do not speak English as a native language [6, 7]. As Internet-penetration rates are already high in most English-speaking countries, future user growth (and the content contributed by these users) will be predominantly in non-English languages [4].

The language dynamics of online reviews have received little scholarly attention, and industry practices vary greatly. In general, many websites aggregate reviews from multiple languages together to compute an average rating as is the case with TripAdvisor, the travel review website analyzed in this paper. Many websites differ, however, on how reviews in other languages are displayed (if at all) to users. TripAdvisor generally shows reviews in reverse chronological order (most recent reviews first), but demotes foreign-language reviews so that they appear after all reviews in the language selected by the user. By contrast, Google Play, a mobile app store, hides reviews in other languages entirely making them completely inaccessible (although reviews from all languages appear to be used when calculating the average rating of an app).111For more details see, “Design for multilinguals: Seemingly simple yet often missed,” http://www.scotthale.net/blog/?p=412 Beyond reviews, Twitter, Facebook, and Google Plus all provide the option to see machine translations of foreign-language posts, and Facebook has experimented with showing machine translations in place of foreign-language posts.

In general, a larger number of reviews is thought to be more helpful to potential consumers making purchasing decisions [10, 13]. There remains, however, a fundamental question of whether reviews in different languages are analytically similar to each other. If speakers of different languages focus on different aspects, evaluate products differently, and/or have consistently different experiences (e.g., different internationalization/localization choices for software or different information, etc. available for in-person activities) the reviews from one language may have less relevance to individuals primarily speaking a different language. If so, the practice of creating an average rating from reviews in multiple languages could be unhelpful or even misleading.

One large segment of user reviews is travel reviews. Tourist attractions in popular, international cities are reviewed by users from many countries, speaking many languages. TripAdvisor is one of the largest platforms for travel reviews, reporting 315 million unique visitors per month.222http://www.tripadvisor.co.uk/PressCenter-c6-About_Us.html All of the reviews on tripadvisor.co.uk about tourist attractions in London, England, were crawled and extracted using a custom-built webcrawler in Python3.333The code is freely available under an open-source license at http://www.scotthale.net/pubs/?chi2016. London is a suitable choice as it is a large, international city and a top tourist destination for people from many countries. At the time of crawling in July 2015, TripAdvisor had 516,641 reviews pertaining to 3,040 different tourist attractions in London. The dataset only includes tourist attractions (as defined by TripAdvisor) and does not include reviews of hotels and restaurants.

Reviews of London attractions in all languages tended to be written in the summer months. Using a 30-day rolling window, the window with the most reviews was centered on July 1 and contained 12% of all reviews (Figure 2).

It is common practice to create one overall rating for a product or item by simply averaging all the available ratings without regard to the location or language of the reviewer. With regards to language and tourist attractions in London, this practice seems to be justified in general, although some language pairs are more strongly correlated than others.

In general, research has suggested that a larger number of reviews is more helpful to a person trying to make a decision about a product [10, 13]. Users may derive some utility from the star ratings of reviews in languages they do not read and possibly more from rough machine translations of the review text. At the same time, the experience of reviewers speaking a different language may be a poor indication of the experience the person will actually have with a product/service. As far as London attractions are concerned, the star ratings of reviews in different languages have varying correlations with each other. Ratings in German, Norwegian, and French are more strongly correlated with reviews in other languages than are ratings in Japanese, Portuguese, or Russian. Thus, the usefulness that users have from reviews in other languages likely varies with the languages they speak.

When there are few reviews in a user’s language(s), it may be helpful to display reviews in other languages. The correlations between pairs of languages suggest that ratings from some languages will be more indicative of the experience a person speaking a given language will have than ratings from other languages. This may be due to underlying elements of culture that are captured by the language(s) of a person. Research has shown some differences in the use of social media platforms correlate with cultural dimensions measured at the country level [3], and similar cultural dimensions may affect the expectations and evaluations of people writing reviews in different languages.

Beyond the similarity of evaluations there is also a user-interface design question about how helpful people perceive reviews written in another language. Experiments are an exciting methodology to directly test how people respond to foreign-language content.

This extended abstract is a first and incomplete step into examining reviews in multiple languages. It is unclear how far the findings related to tourist attractions in London, England, extend to other locations or to other types of reviews. Further work is needed to analyze other types of reviews such as reviews of mobile apps where the user experiences may vary across languages depending on the international and localization choices made. Even seemingly language-neutral factors such as the well-known 140-character limit on Twitter appear to have different effects on users writing in different languages [11, 12]. Such research is important, along with other information such as rates of bilingualism, for interface designers to decide which foreign-language reviews to show first (if any) and how ratings from multiple languages should be averaged (if at all). At the same time, it is important to remember that many Internet users are bilingual [6, 7]—perhaps even the majority [2, 5]—and, designers should allow multilingual users access to content in their multiple languages.

I am grateful for funding support to conduct this research from the John Fell Oxford University Press (OUP) Research Fund as well as the University of Oxford’s Economic and Social Research Council (ESRC) Impact Acceleration Account and Higher Education Innovation Fund (HEIF) allocation. I would also like to thank the UK Arts and Humanities Research Council (AHRC) for funding the original collection of TripAdvisor data as part of a project studying the quality and completeness of the web archive data.