Virtual reality (VR) enables mobile wireless users to experience multimodal perceptions in a virtual space. In this paper we investigate the problem of concurrent support of visual and haptic perceptions over wireless cellular networks, with a focus on the downlink transmission phase. While the visual perception requires moderate reliability and maximized rate, the haptic perception requires fixed rate and high reliability. Hence, the visuo-haptic VR traffic necessitates use of two different network slices: enhanced mobile broadband (eMBB) for visual perception and ultra-reliable and low latency communication (URLLC) for haptic perception. We investigate two methods by which these two slices are sharing the downlink resources orthogonally and non-orthogonally, respectively. We compare these methods in terms of just-noticeable difference (JND), an established measure in psychophysics, and show that non-orthogonal slicing becomes preferable under a higher target integrated-perceptual resolution and/or a higher target rate for haptic perceptions. 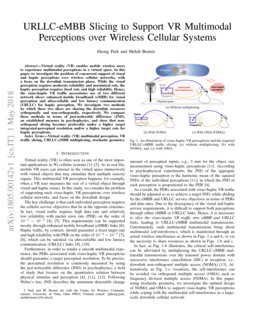 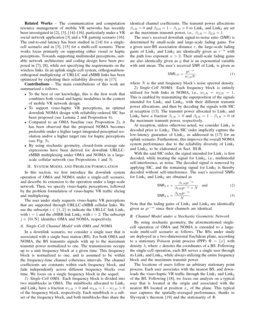 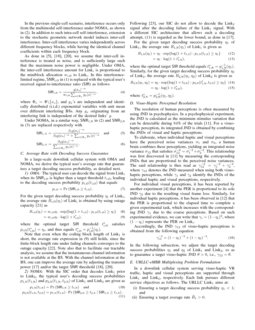 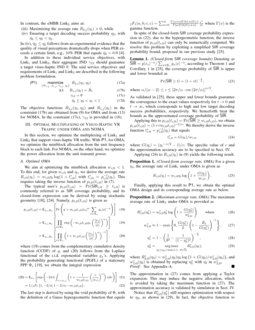 Virtual reality (VR) is often seen as one of the most important applications in 5G cellular systems [ABIQualcommVR:17, EjderVR:17, ParkWCL:18]. As in real life, mobile VR users can interact in the virtual space immersively with virtual objects that may stimulate their multiple sensory organs. This multimodal VR perception happens, for example, when a VR user measures the size of a virtual object through visual and haptic senses. In this study, we consider the problem of supporting such visuo-haptic VR perceptions over wireless cellular networks, and focus on the downlink design.

The key challenge is that these two perceptions have completely different cellular service requirements. In fact, visual traffic requires high data rate and relatively low reliability with packet error rate (PER) on the order of 10−1∼10−3 [Shi:10, UR2Cspaswin:17]. This requirements can be supported mostly through enhanced mobile broadband (eMBB) links [ITU5G:15]. Haptic traffic, by contrast, should guarantee a fixed target rate and high reliability with PER on the order of 10−4∼10−5 [Steinbach:12, Zhang:18], which can be satisfied via ultra-reliable and low latency communication (URLLC) links [PetarURLLC:17, MehdiURLLC:18].

Furthermore, in order to render a smooth multimodal experience, the PERs associated with the visuo-haptic VR perceptions should guarantee a target perceptual resolution. To be precise, the perceptual resolution is commonly measured by using the just-noticeable difference (JND) in psychophysics, a field of study that focuses on the quantitative relation between physical stimulus and perception [Ernst:2002aa, Shi:10, ShiHirche:16]. Following Weber’s law, JND describes the minimum detectable change amount of perceptual inputs, e.g., 3 mm for the object size measurement using visuo-haptic perceptions [Ernst:2002aa]

. According to psychophysical experiments, the JND of the aggregate visuo-haptic perception is the harmonic mean of the squared JNDs of the individual perceptions

As a result, the PERs associated with the visuo-haptic VR traffic should be adjusted so as to achieve a target JND, while abiding by the eMBB and URLLC service objectives in terms of PERs and data rates. Due to the discrepancy of the visual and haptic service requirements, it is difficult to support both perceptions through either eMBB or URLLC links. Hence, it is necessary to slice the visuo-haptic VR traffic into eMBB and URLLC links, leading to URLLC-eMBB multimodal transmissions. Unfortunately, such multimodal transmissions bring about multimodal self-interference, which is manifested through an actual wireless interference as visualized in Figs. 1-a and b, or via the necessity to share resources as shown in Figs. 1-b and c.

Related Works – The communication and computation resource management of mobile VR networks has recently been investigated in [EjderVR:17, OsvaldoAR:17, ChenSaad:17, ParkWCL:18, Elbamby:18], particularly under a VR social network application [ParkWCL:18] and a VR gaming scenario [Elbamby:18]. The end-to-end latency has been studied in [OsvaldoAR:17] for a single-cell scenario and in [ChenSaad:17, ParkWCL:18] for a multi-cell scenario. These works focus primarily on supporting either visual or haptic perceptions. Towards supporting multimodal perceptions, suitable network architecture and coding design have been proposed in [Zhang:18, Steinbach:12], while not specifying the requirements on the wireless links. In an uplink single-cell system, orthogonal/non-orthogonal multiplexing of URLLC and eMBB links has been optimized by exploiting their reliability diversity in [Petar5G:18].

In this section, we first introduce the downlink system operation of OMA and NOMA under a single-cell scenario, and describe its extension to the operation under a large-scale network. Then, we specify visuo-haptic perceptions, followed by the problem formulation of visuo-haptic VR traffic slicing and multiplexing.

The user under study requests visuo-haptic VR perceptions that are supported through URLLC-eMBB cellular links. We use the subscript i∈{1,2} to indicate the URLLC link Link1 with i=1 and the eMBB link Link2 with i=2. The subscript j∈{O,N} identifies OMA and NOMA, respectively.

In a downlink scenario, we consider a single user that is associated with a single base station (BS). For both OMA and NOMA, the transmissions of the BS at a given time occupy up to the frequency bandwidth normalized to one, which is divided into the K number of miniblocks. Each miniblock is assumed to be within the frequency-time channel coherence intervals. The channel coefficients are thus constants within each miniblock, and fade independently across different miniblocks over frequency and time. The transmit power of the BS is equally divided for each miniblock, normalized to one.

is an exponential random variable with unit mean, which is independent and identically distributed (i.i.d.) across different miniblocks. The user’s received

SNR of Linki through miniblock k∈Ki is then expressed as

where N is the noise spectral density of a single miniblock.

At reception, unless otherwise noted, we consider Link1 is decoded prior to Link2. This SIC order implicitly captures the low-latency guarantee of Link1, as addressed in [Petar5G:18] for an uplink scenario. Furthermore, it improves the overall NOMA system performance due to the reliability diversity of Link1 and Link2, to be elaborated in Sect. LABEL:Sect:OptNOMA.

Note that all the fading gains of Link1 and Link2 are identically g(k)ir−α since their channels are identical.

By using stochastic geometry, the aforementioned single-cell operation of OMA and NOMA is extended to a large-scale multi-cell scenario as follows. The BSs under study are deployed in a two-dimensional Euclidean plane, according to a stationary Poisson point process (PPP) Φ with density λ, where the coordinates x of a BS belongs to Φ. Following the single-cell operation, each BS serves a single user through its Link1 and Link2.

The locations of users follow an arbitrary stationary point process. Each user associates with the nearest BS, and downloads the visuo-haptic VR traffic through the Link1 and Link2 of the BS. Following [Andrews:2011bg], we focus our analysis on a typical user that is located at the origin and associated with the nearest BS located at position xo of the plane. This typical user captures the spatially-averaged performance, thanks to Slyvnyak’s theorem [HaenggiSG] and the stationarity of Φ.

Under OMA, the typical user’s received SIR of Linki through miniblock k∈Ki is thereby given as

where g(k)x’s are exponential random variables with unit mean, which are independent of g(k)i and are i.i.d. across different interfering BSs. Likewise, under NOMA, the typical user’s received SIR of Linki through miniblock k∈Ki is expressed as

To facilitate tractable analysis, we consider that the instantaneous channel information is not available at each BS. With the channel information at a BS, one can improve the average rate by adjusting the transmit power [Petar5G:18] and/or the coding rate [Andrews:2011bg, JHParkTWC:15]. In addition, we assume separate coding for each miniblock, which may loose frequency diversity gain compared to the coding across multiple miniblocks [Petar5G:18, TseBook:FundamaentalsWC:2005].

With these assumptions and the SIRs that are identically distributed across miniblocks, average rate is determined by the decoding success probability for any single miniblock. Therefore, we drop the superscript (k) in SIR(k)i,j and the small-scale fading terms, and derive the average rate in the sequel.

The typical user can decode the signal from Linki with the decoding success probability pi,O(ti,O) that equals

where ri,O is the coding rate per miniblock, which is hereafter rephrased as a target SIR threshold ti,O=eri,O−1.

For the given target decoding success probability ηi of Linki, the average rate Ri,O(ηi) of Linki is obtained by using outage capacity [TseOC:07] as

Note that even when the coding block length of Link1 is short, the average rate expression in (10) still holds, since the finite-block length rate under fading channels converges to the outage capacity [DurisiPolyanski:14].

With the SIC order that decodes Link1 prior to Link2, the typical user’s decoding success probabilities p1,N(t1,N) and p2,N(t1,N,t2,N) of Link1 and Link2 are given as

Following [JindalSIC:09], our SIC do not allow to decode the Link2 signal after the decoding failure of the Link1 signal. With a different SIC architecture that allows such a decoding attempt, (12) is regarded as the lower bound, as done in [Petar5G:18].

For the given target decoding success probability η1 of Link1, the average rate R1,N(η1) of Link1 is given as

where the optimal target SIR threshold equals t∗1,N=p−11,N(η1). Similarly, for the given target decoding success probability η2 of Link2, the average rate R2,N(η1,η2) of Link2 is given as

The resolution of human perceptions is often measured by using JND in psychophysics. In a psychophysical experiment, the JND is calculated as the minimum stimulus variation that can be detectable during 84% of the trials [Ernst:2002aa]. For a visuo-haptic perception, its integrated JND is obtained by combining the JNDs of visual and haptic perceptions.

To elaborate, when individual haptic and visual perceptions have the perceived noise variances

σ1 and σ2, a human brain combines these perceptions, yielding an integrated noise variance σ12 that satisfies σ−212=σ−21+σ−22. This relationship was first discovered in [Ernst:2002aa] by measuring the corresponding JNDs that are proportional to the perceived noise variances. The said relationship is thus read as γ−212=γ−21+γ−22, where γ12 denotes the JND measured when using both visuo-hapric perceptions, while γ1 and γ2 identify the JNDs of the individual haptic and visual perceptions, respectively.

For individual visual perceptions, it has been reported by another experiment [Shi:10] that the PER is proportional to its sole JND γ2 due to the resulting visual frame loss. Similarly, for individual haptic perceptions, it has been observed in [ShiHirche:16] that the PER is proportional to the elapsed time to complete a given experimental task, which increases with the corresponding JND γ1 due to the coarse perceptions. Based on such experimental evidence, we can write that γi=(1−ηi)2, where (1−ηi) represents the PER on Linki.

Accordingly, the JND γ12 of visuo-haptic perceptions is obtained from the following equation

In the following subsection, we adjust the target decoding success probabilities η1 and η2 of Link1 and Link2, so as to guarantee a target visuo-haptic JND θ>0, i.e., γ12=θ.

In a downlink cellular system serving visuo-haptic VR traffic, haptic and visual perceptions are supported through Link1 and Link2, respectively. Each link pursues different service objectives as follows. The URLLC Link1 aims at:

In contrast, the eMBB Link2 aims at:

In (iv), ^η2≤η2 follows from an experimental evidence that the quality of visual perceptions dramatically drops when PER exceeds a certain limit, e.g., 10% PER that equals ^η2=0.9 [Shi:10].

The objective functions R2,j(η1,η2) and R1,j(η1) in the constraint (18b) are obtained from (10) for OMA and from (14) for NOMA. In the constraint (18c), γ12 is provided in (17). Without loss of generality, we hereafter consider a sufficiently large number K of miniblocks so that the miniblock allocation fraction wi,j under OMA is treated as a continuous value.

We aim at optimizing the miniblock allocation wi,O<1. To this end, for given wi,O and ηi, we derive the average rate Ri,O(ηi)=wi,Oηilog(1+t∗i,O) with t∗i,O=p−1i,O(ηi). This requires taking the inverse function of pi,O(ti,O) in (8).

The typical user’s pi,O(ti,O)=Pr(SIRi,O≥ti,O) is commonly referred to as SIR coverage probability, and its closed-form expression can be derived by using stochastic geometry [Andrews:2011bg, Haenggi:ISIT14]. Namely, pi,O(ti,O) is given as