The ability to perceive the environments in different ways is essential to robotic research. This involves the analysis of both 2D and 3D data sources. We present a large scale urban scene dataset associated with a handy simulator based on Unreal Engine 4 and AirSim, which consists of both man-made and real-world reconstruction scenes in different scales, referred to as UrbanScene3D. Unlike previous works that purely based on 2D information or man-made 3D CAD models, UrbanScene3D contains both compact man-made models and detailed real-world models reconstructed by aerial images. Each building has been manually extracted from the entire scene model and then has been assigned with a unique label, forming an instance segmentation map. The provided 3D ground-truth textured models with instance segmentation labels in UrbanScene3D allow users to obtain all kinds of data they would like to have: instance segmentation map, depth map in arbitrary resolution, 3D point cloud/mesh in both visible and invisible places, etc. In addition, with the help of AirSim, users can also simulate the robots (cars/drones)to test a variety of autonomous tasks in the proposed city environment. Please refer to our paper and website(https://vcc.tech/UrbanScene3D/) for further details and applications. 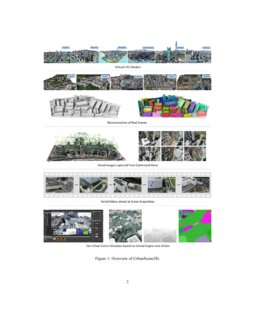 TorontoCity: Seeing the World with a Million Eyes

In this paper we introduce the TorontoCity benchmark, which covers the f...
Shenlong Wang, et al. ∙

The success of deep learning in computer vision is based on availability...
Hassan Abu Alhaija, et al. ∙

3D instance segmentation, with a variety of applications in robotics and...
Lei Han, et al. ∙

The ability to perceive the environments in different ways is essential to computer graphics, vision, and robotic research. This involves the analysis of various data sources, such as depth map, visual image, and LIDAR data, etc. Related works in 2D/2.5D [coco, kitti] image domains have been proposed. However, a comprehensive understanding of 3D scenes needs the cooperation of 3D data (e.g., point clouds and textured polygon meshes), which is still far from sufficient in the community.

We present a large scale urban scene dataset associated with a handy simulator based on Unreal Engine 4 [unrealengine] and AirSim [airsim], which consists of both man-made and real-world reconstruction scenes in different scales, referred to as UrbanScene3D (https://vcc.tech/UrbanScene3D). The manually made scene models have compact structures, which are carefully constructed/designed by professional modelers according to the images and maps of target areas; see the first row of Figure 1 for a glance. In contrast, UrbanScene3D also offers dense, detailed scene models reconstructed by aerial images through multi-view stereo (MVS) techniques. These scenes have realistic textures and meticulous structures; see e.g., the second row of Figure 1. We have also released the originally captured aerial images that have been used to reconstruct the 3D scene models, as well as a set of 4K video sequences, all of which would facilitate designing algorithms, such SLAM and MVS; please check some samples shown in the third and fourth rows of Figure 1.

[airsim], users can also simulate the robots (cars/drones) to test a variety of autonomous tasks in the proposed city environment; see e.g., the bottom row of Figure 1.

We show the statistics and features of our dataset below.

The released zip file on our website contains the unreal project of the above proposed urban scenes. Users can use either pure Unreal Engine or AirSim client (both in C++ or python) to capture their desired data. The ground truth textured meshes and their relevant poses are also provided in the Unreal project.

UrbanScene3D not only has CAD models that contain sharp edges and compact primitive structures for man-made virtual environments, but also has reconstructed mesh models with detailed, realistic features for real-world urban scenes. Please refer to the videos shown at our project page https://vcc.tech/UrbanScene3D. We build the touring in different scenes to demonstrate their corresponding CAD/Detailed models.

In addition, UrbanScene3D also releases the raw acquisition data, including high resolution aerial images (6000x4000) and aerial videos (4K) together along with their poses and detailed reconstructed 3D models. Check out the video samples shown below. These data can be largely used to train and test algorithms like SLAM, MVS or single view reconstruction in the wild.

Moreover, based on the UrbanScene3D simulator, users can design autonomous driving/flying in various environments. Below we demonstrate some popular applications via our simulator.

Note that this dataset is free for Research and Education Use ONLY. Please cite this document if you use any part of our DATA in any publication.