As a class of state-dependent channels, Markov channels have been long studied in information theory for characterizing the feedback capacity and error exponent. This paper studies a more general variant of such channels where the state evolves via a general stochastic process, not necessarily Markov or ergodic. The states are assumed to be unknown to the transmitter and the receiver, but the underlying probability distributions are known. For this setup, we derive an upper bound on the feedback error exponent and the feedback capacity with variable-length codes. The bounds are expressed in terms of the directed mutual information and directed relative entropy. The bounds on the error exponent are simplified to Burnashev's expression for discrete memoryless channels. Our method relies on tools from the theory of martingales to analyze a stochastic process defined based on the entropy of the message given the past channel's outputs. 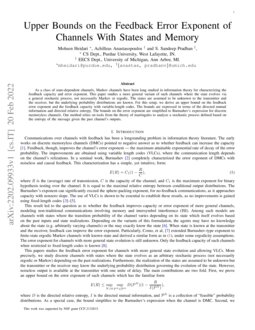 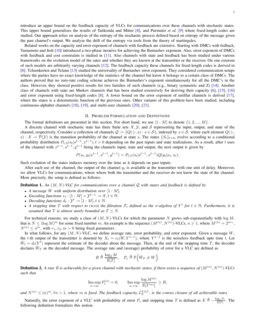 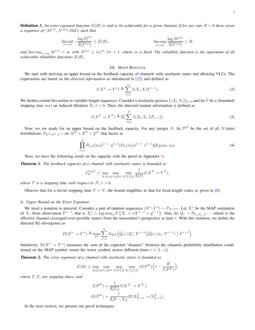 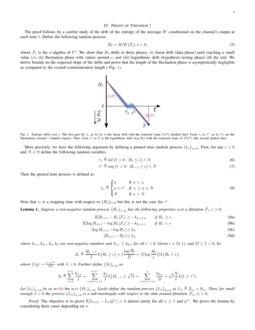 We derive a lower and upper bound on the reliability function of discret...
Mohsen Heidari, et al. ∙

In this paper, we consider the problem of variable-length coding over th...
Hengjie Yang, et al. ∙

Predicting the trajectory of stochastic dynamical systems (SDSs) is an i...
Tao Xu, et al. ∙

On Joint Communication and Channel Discrimination

Communications over channels with feedback has been a longstanding problem in information theory literature. The early works on discrete memoryless channels pointed to negative answer as to whether feedback can increase the capacity [1]. Feedback, though, improves the channel’s error exponent — the maximum attainable exponential rate of decay of the error probability. The improvements are obtained using variable length codes, where the communication length depends on the channel’s relizations. In a seminal work, Burnashev [2] completely characterized the error exponent of DMC with noiseless and causal feedback. This characterization has a simple, yet intuitive, form:

where R is the (average) rate of transmission, C is the capacity of the channel, and C1 is the maximum exponent for binary hypothesis testing over the channel. It is equal to the maximal relative entropy between conditional output distributions. The Burnashev’s exponent can significantly exceed the sphere-packing exponent, for no-feedback communications, as it approaches capacity with nonzero slope. The use of VLCs is shown to be essential to establish these resutls, as no improvements is gained using fixed-length codes [3, 4, 5].

This result led to the question as to whether the feedback improves capacity or error exponent of more general channels, modeling non-traditional communications involving memory and intersymbol interference (ISI). Among such models are channels with states where the transition probability of the channel varies depending on its state which itself evolves based on the past inputs and state realizations. Depending on the variants of this formulation, the agents may have no knowledge about the state (e.g. arbitrarily varying channels) or the may exactly know the state [6]. When state is known at the transmitter and the receiver, feedback can improve the error exponent. Particularly, Como, et al, [7] extended Burnashev-type exponent to finite-state ergodic Markov channels with known state and derived a similar form as in (1), under some ergodicity assumptions. The error exponent for channels with more general state evolution is still unknown. Only the feedback capacity of such channels when restricted to fixed-length codes is known [8].

This papers studies the feedback error exponent for channels with more general state evolution and allowing VLCs. More precisely, we study discrete channels with states where the state evolves as an arbitrary stochastic process (not necessarily ergodic or Markov) depending on the past realizations. Furthermore, the realization of the states are assumed to be unknown but the transmitter or the receiver may know the underlying probability distribution governing the evolution of the state. However, noiseless output is available at the transmitter with one unite of delay. The main contributions are two fold. First, we prove an upper bound on the error exponent of such channels which has the familiar form

where D is the directed relative entropy, I is the directed mutual information, and PN is a collection of “feasible” probability distributions. As a special case, the bound simplifies to the Burnashev’s expression when the channel is DMC. Second, we introduce an upper bound on the feedback capacity of VLC for communications over these channels with stochastic states. This upper bound generalizes the results of Tatikonda and Mitter [8], and Purmuter et al.[9] where fixed-length codes are studied. Our approach relies on analysis of the entropy of the stochastic process defined based on entropy of the message given the past channel’s output. We analyze the drift of the entropy via tools from the theory of martingales.

Related works on the capacity and error exponent of channels with feedback are extensive. Starting with DMCs with fedback, Yamamoto and Itoh [10] introduced a two-phase iterative for achieving the Burnashev exponent. Also, error exponent of DMCs with feedback and cost constraints is studied in [11]. Also channels with state and feedback has been studied under various frameworks on the evolution model of the sates and whether they are known at the transmitter or the receiver. On one exterem of such models are arbitrarily varying channels [12]. The feedback capacity these channels for fixed-length codes is derived in [8]. Tchamkerten and Telatar [13] studied the universality of Burnashev error exponent. They considered communication setups where the parties have no exact knowledge of the statistics of the channel but know it belongs to a certain class of DMCs. The authors proved that no zero-rate coding scheme achieves the Burnashev’s exponent simultaneously for all the DMC’s in the class. However, they showed positive results for two families of such channels (e.g., binary symmetric and Z) [14]. Another class of channels with state are Markov channels that has been studied extensively for deriving their capacity [6, 15, 16] and error exponent using fixed-length codes [8]. A lower bound on the error exponent of unifilar channels is derived [17], where the states is a deterministic function of the previous ones. Other variants of this problem have been studied, including continuous-alphabet channels [18, 19], and multi-user channels [20, 21].

A discrete channel with stochastic state has three finite sets X,Y, and S representing the input, output, and state of the channel, respectively. Consider a collection of channels Q:={Q(⋅|⋅,s):s∈S}, indexed by s∈S, where each element Q(⋅|⋅,s):X→P(Y) is the transition probability of the channel at state s. The states {St}t>0

, evolve according to a conditional probability distribution

Pt,S(st|st−1,xt−1),t>0 depending on the past inputs and state realizations. As a result, after t uses of the channel with xt−1,st−1,yt−1 being the channels input, state and output, the next output is given by

Such evolution of the states induces memory over the time as it depends on past inputs.

An (M,N)-VLC for communications over a channel Q with states and feedback is defined by

For technical reasons, we study a class of (M,N)-VLCs for which the parameter N grows sub-exponentially with logM, that is N≤(logM)m for some fixed number m. An example is the sequence (M(n),N(n))-VLCs, n≥1, where M(n)=2nr1,N(n)≤nm, with r1,r2,m>0 being fixed parameters .

In what follows, for any (M,N)-VLC, we define average rate, error probability, and error exponent. Given a message W, the t-th output of the transmitter is denoted by Xt=et(W,Yt−1), where Yt−1 is the noiseless feedback upto time t. Let ^Wt=dt(Yt)

represent the estimate of the decoder about the message. Then, at the end of the stopping time

T, the decoder declares ^WT as the decoded message. The average rate and (average) probability of error for a VLC are defined as

A rate R is achievable for a given channel with stochastic states, if there exists a sequence of (M(n),N(n))-VLCs such that

and N(n)≤(n)m,∀n>1, where m is fixed. The feedback capacity, CVLCF, is the convex closure of all achievable rates.

Naturally, the error exponent of a VLC with probability of error Pe and stopping time T is defined as E\ensurestackMath\stackon[1pt]=Δ−log2PeE[T]. The following definition formalizes this notion.

An error exponent function E(R) is said to be achievable for a given channel, if for any rate R>0 there exists a sequence of (M(n),N(n))-VLCs such that

We start with deriving an upper bound on the feedback capacity of channels with stochastic states and allowing VLCs. The expressions are based on the directed information as introduced in [22] and defined as

We further extend this notion to variable-length sequences. Consider a stochastic process {(Xt,Yt)}t>0 and let T be a (bounded) stopping time w.r.t an induced filtration Ft,t>0. Then, the directed mutual information is defined as

Now, we are ready for an upper bound on the feedback capacity. For any integer N, let PN be the set of all N-letter distributions PXN,SN,YN on XN×SN×YN that factor as

Next, we have the following result on the capacity with the proof in Appendix A.

where T is a stopping time with respect to Ft,t>0.

Observe that for a trivial stopping time T=N, the bound simplifies to that for fixed-length codes as given in[8].

We need a notation to proceed. Consider a pair of random sequences (Xn,Yn)∼PXnYn. Let X∗r be the MAP estimation of Xr from observation Yr−1, that is X∗r=argmaxxP{Xr=x|Yr−1=yr−1}. Also, let ¯Qr=PYr|Xr,Yr−1 which is the effective channel (averaged over possible states) from the transmitter’s perspective at time r. With this notation, we define the directed KL-divergence as

Intuitively, D(Xn→Yn) measures the sum of the expected “distance” between the channels probability distribution conditioned on the MAP symbol versus the worst symbol, across different times r∈[1:n].

where T,T1 are stopping times, and

In the next section, we present our proof techniques.

The proof follows by a careful study of the drift of the entropy of the message W conditioned on the channel’s output at each time t. Define the following random process:

where Ft is the σ-algebra of Yt. We show that Ht drifts in three phases: (i) linear drift (data phase) until reaching a small value (ϵ); (ii) fluctuation phase with values around ϵ; and (iii) logarithmic drift (hypothesis testing phase) till the end. We derive bounds on the expected slope of the drifts and prove that the length of the fluctuation phase is asymptotically negligible as compared to the overall communication length ( Fig. 1).

More precisely, we have the following argument by defining a pruned time random process {tn}n>0. First, for any ϵ≥0 and N∈N

Then the pruned time process is defined as

Note that τϵ is a stopping time with respect to {Ht}t>0 but this is not the case for τϵ.

Let {tn}n>0 be as in (8) but w.r.t {Hr}r>0. Lastly define the random process {Ln}n>0 as Ln\ensurestackMath\stackon[1pt]=ΔZtn+Stn. Then, for small enough λ>0 the process {Ln}n>0 is a sub-martingale with respect to the time pruned filtration Ftn,n>0.

The objective is to prove E[Ln+1−Ln|ytn]≥0 almost surely for all n≥1 and ytn. We prove the lemma by considering three cases depending on n.

As a result, the difference between Ln and Ln+1 satisfies the following

Note that Zτϵ does not necessarily equal to the logarithmic part. The reason is that τϵ is pruned by N as in (7). Thus, Hτϵ can be greater than ϵ when τϵ=N. We proceed by bounding Zτϵ. Note that, for small enough λ the following inequality holds

Applying inequality (11) with y=logHτϵϵ, we can write that

Next, we bound the first term above as

where in the first equality, we add and subtract the intermediate terms Hr,n+1≤r≤τϵ−1. Next,we substitute the above terms in the right-hand side of (13). As n+2=τϵ+1, then we obtain that

where the inequality holds from (9a) and the fact that n+1=τϵ. Next, by factoring I and the indicator function inside the expectation, we have the following chain of inequalities

Hence, to sum up the above sub-cases, we conclude that when n≥τϵ, then

Note that from (9b), the following inequality holds

As a result, we have that

where inequality (a) holds as |ζ−logHnϵ|≤|logHn+1ϵ−logHnϵ|≤k3. The last inequality holds for sufficiently small λ>0.

Given any (M,N)-VLC, the following inequality holds almost surely for 1≤r≤N