In any graph G, the domination number γ(G) is at most the independence number α(G). The Inverse Domination Conjecture says that, in any isolate-free G, there exists pair of vertex-disjoint dominating sets D, D' with |D|=γ(G) and |D'| ≤α(G). Here we prove that this statement is true if the upper bound α(G) is replaced by 3/2α(G) - 1 (and G is not a clique). We also prove that the conjecture holds whenever γ(G)≤ 5 or |V(G)|≤ 16. 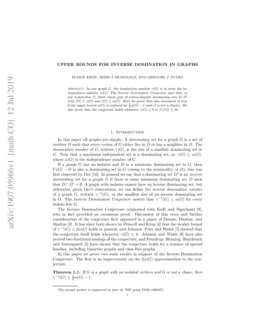 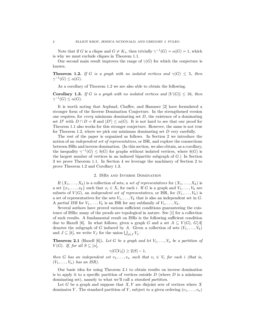 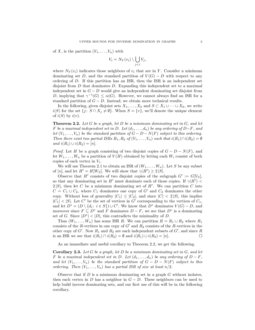 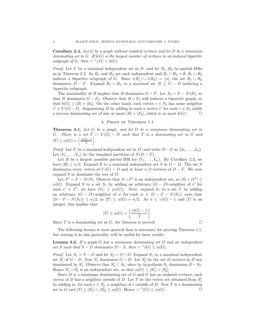 In this paper all graphs are simple. A dominating set for a graph G is a set of vertices D such that every vertex of G either lies in D or has a neighbor in D. The domination number of G, written γ(G), is the size of a smallest dominating set in G. Note that a maximum independent set is a dominating set, so γ(G)≤α(G), where α(G) is the independence number of G.

The Inverse Domination Conjecture originated with Kulli and Sigarkanti [9], who in fact provided an erroneous proof. Discussion of this error and further consideration of the conjecture first appeared in a paper of Domke, Dunbar, and Markus [3]. It has since been shown by Driscoll and Krop [4] that the weaker bound of γ−1(G)≤2α(G) holds in general, and Johnson, Prier and Walsh [7] showed that the conjecture itself holds whenever γ(G)≤4. Johnson and Walsh [8] have also proved two fractional analogs of the conjecture, and Frendrup, Henning, Randerath and Vestergaard [5] have shown that the conjecture holds for a number of special families, including bipartite graphs and claw-free graphs.

In this paper we prove two main results in support of the Inverse Domination Conjecture. The first is an improvement on the 2α(G) approximation to the conjecture.

Our second main result improves the range of γ(G) for which the conjecture is known.

As a corollary of Theorem 1.2 we are also able to obtain the following.

The rest of the paper is organized as follows. In Section 2 we introduce the notion of an independent set of representatives, or ISR, and explore the connections between ISRs and inverse domination. (In this section, we also obtain, as a corollary, the inequality γ−1(G)≤b(G) for graphs without isolated vertices, where b(G) is the largest number of vertices in an induced bipartite subgraph of G.) In Section 3 we prove Theorem 1.1. In Section 4 we leverage the machinery of Section 2 to prove Theorem 1.2 and Corollary 1.3.

Several authors have proved various sufficient conditions guaranteeing the existence of ISRs; many of the proofs are topological in nature. See [1] for a collection of such results. A fundamental result on ISRs is the following sufficient condition due to Haxell [6]. In what follows, given a graph G and a set A⊆V(G), G[A] denotes the subgraph of G induced by A. Given a collection of sets (V1,…,Vk) and J⊆[k], we write VJ for the union ⋃j∈JVj.

Our basic idea for using Theorem 2.1 to obtain results on inverse domination is to apply it to a specific partition of vertices outside D (where D is a minimum dominating set), namely to what we’ll call a standard partition.

Let G be a graph and suppose that X,Y are disjoint sets of vertices where X dominates Y. The standard partition of Y, subject to a given ordering (v1,…,vn) of X, is the partition (V1,…,Vn) with

Let H be a graph consisting of two disjoint copies of G−D−N(F), and let W1,…,Wn be a partition of V(H) obtained by letting each Wi consist of both copies of each vertex in Vi.

Observe that H′ consists of two disjoint copies of the subgraph G′:=G[VS], so that any dominating set in H′ must dominate each of those copies. If γ(H′)<2|S|, then let C be a minimum dominating set of H′. We can partition C into C=C1∪C2, where C1 dominates one copy of G′ and C2 dominates the other copy. Without loss of generality |C1|≤|C2|, and since |C|<2|S|, this implies |C1|<|S|. Let C′ be the set of vertices in G′ corresponding to the vertices of C1, and let D∗=(D∖{di:i∈S})∪C′. We know that D∗ dominates V(G)−D, and moreover since F⊆D∗ and F dominates D−F, we see that D∗ is a dominating set of G. Since |D∗|<|D|, this contradicts the minimality of D.

As an immediate and useful corollary to Theorem 2.2, we get the following.

Observe that if D is a minimum dominating set in a graph G without isolates, then each vertex in D has a neighbor in G−D. These neighbors can be used to help build inverse dominating sets, and our first use of this will be in the following corollary.

Let G be a graph without isolated vertices and let D be a minimum dominating set in G. If b(G) is the largest number of vertices in an induced bipartite subgraph of G, then γ−1(D)≤b(G).

The maximality of B implies that B dominates G−F. Let F0=F−N(B), so that B dominates G−F0. Observe that B∪F0 still induces a bipartite graph, so that b(G)≥|B|+|F0|. On the other hand, each vertex v∈F0 has some neighbor v′∈V(G)−D. Augmenting B by adding in such a vertex v′ for each v∈F0 yields a inverse dominating set of size at most |B|+|F0|, which is at most b(G). ∎

Let R be a largest possible partial ISR for (V1,…,Vn). By Corollary 2.3, we have |R|≥n/2. Expand R to a maximal independent set S in G−D. The set S dominates every vertex of V(G)−D and at least n/2 vertices of D−F. We now expand S to dominate the rest of D.

Since T is a dominating set in G, the theorem is proved. ∎

The following lemma is more general than is necessary for proving Theorem 1.1, but stating it in this generality will be useful for later results.

If a graph G has a minimum dominating set D and an independent set S such that S−D dominates D−S, then γ−1(G)≤α(G).

Let G be an isolate-free graph and let D be an optimal dominating set in G. If v∈D is not an isolated vertex in G[D], then v has at least 2 private neighbors with respect to D.

Let G be an isolate-free graph and let D be an optimal dominating set in G. Suppose that the number of isolates in G[D] is a. Then either G has an independent set S such that S−D dominates D−S, or all of the following are true:

Assuming that G has no such independent set S, we prove each part of the conclusion separately.

If there is a pair of nonadjacent vertices vn−1∈Vn−1, vn∈Vn, then taking S={d1,…,dn−2,vn−1,vn} yields an independent set S such that S−D dominates D−S. Otherwise, there is a complete bipartite graph between Vn−1 and Vn. Taking v∗n−1 and v∗n to be private neighbors of dn−1 and dn respectively, we see that {d1,…,dn−2,v∗n−1,v∗n} is a dominating set in G having independence number n−1, contradicting the optimality of D.

Write D={d1,…,dn} with d1,…,dn−4 isolated in G[D], and let (V1,…,Vn) be the standard partition of V(G)−D with respect to this ordering. Suppose first that there is an independent set S0 in G−D hitting at least three of the sets {Vn−3,…,Vn}. Then define S to be S0∪{d1,…,dn−4}; note S is independent. Out of the four vertices in D−S, at most one is not dominated by S−D. However, if such a vertex exists, then we can add it to S as well, without violating independence. Thus, we may assume that no such set S0 exists.

If the pair (Vn−3,Vn−2) is joined by a complete bipartite graph, then we may take v∗n−3 and v∗n−2 to be private neighbors of dn−3 and dn−2 respectively. Now

of size n−2, contradicting the optimality of D.

Otherwise, there is a pair of nonadjacent vertices vn−3∈Vn−3 and vn−2∈Vn−2. Since, by assumption, this pair cannot be extended to an independent set that also hits one of the sets Vn−1 or Vn, we see that {vn−3,vn−2} dominates Vn−1∪Vn. Thus

is a dominating set in G containing the independent set

contradicting the optimality of D. ∎

We wish to strengthen the conclusion of Theorem 2.2 by eliminating the maximal independent set F inside D, and instead finding a pair of ISRs that jointly dominate the entire minimum dominating set D. When γ(G)=5 and α(D)≤2, we are able to do this.

If (V1,…,V5) has a partial ISR of size 4, then we immediately get the desired conclusion: taking R to be such an ISR, we see that R dominates all of D except possibly for a single vertex w∈D, so we win by letting S=R∪{w} (or S=R) and applying Lemma 3.2.

Let T be the set of vertices in G that are not dominated by R1∪R2. If T=∅ then we immediately have the desired conclusion, as R1∪R2 is an inverse dominating set of size γ. Thus we may assume that T is a nonempty subset of V(G)−D, and in particular, T⊆V1∪V2∪V3.

In this case, let D′=R∗∪{dk}. Since R∗ dominates ⋃j≠kVj, we see that D′ is a dominating set of G. Since k≤3, the set {dk,r4,r5} is an independent set: if dk were adjacent to r4, this would imply r4∈Vk, contradicting r4∈V4, and likewise for r5. This contradicts the optimality of D. ∎

Let G be some graph with γ−1(G)>α(G), and let D be an optimal dominating set in G. Let a be the number of isolated vertices in G[D]. By Lemma 3.2, there cannot be any independent set S such that S−D dominates D−S, so by Lemma 4.2, we have: