Using a drone as an aerial base station (ABS) to provide coverage to users on the ground is envisaged as a promising solution for beyond fifth generation (beyond-5G) wireless networks. While the literature to date has examined downlink cellular networks with ABSs, we consider an uplink cellular network with an ABS. Specifically, we analyze the use of an underlay ABS to provide coverage for a temporary event, such as a sporting event or a concert in a stadium. Using stochastic geometry, we derive the analytical expressions for the uplink coverage probability of the terrestrial base station (TBS) and the ABS. The results are expressed in terms of (i) the Laplace transforms of the interference power distribution at the TBS and the ABS and (ii) the distance distribution between the ABS and an independently and uniformly distributed (i.u.d.) ABS-supported user equipment and between the ABS and an i.u.d. TBS-supported user equipment. The accuracy of the analytical results is verified by Monte Carlo simulations. Our results show that varying the ABS height leads to a trade-off between the uplink coverage probability of the TBS and the ABS. In addition, assuming a quality of service of 90 uplink coverage probability of the ABS of over 85 ABS deployed at or below its optimal height of typically between 250-500 m for the considered setup. 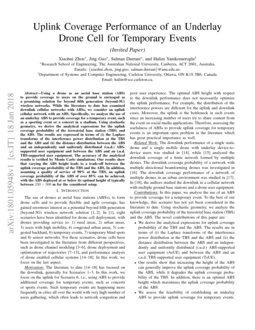 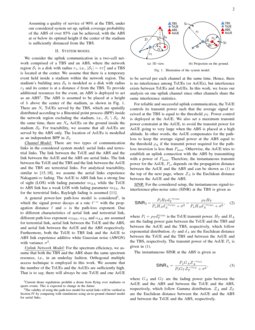 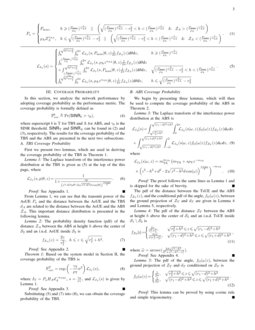 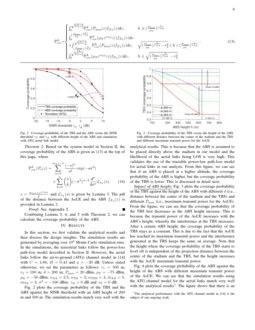 The use of drones as aerial base stations (ABSs), to form drone cells and to provide flexible and agile coverage, has gained enormous interest as a potential beyond fifth generation (beyond-5G) wireless network solution [1, 2]. In [1], eight scenarios have been identified for drone cell deployment, with drones providing service to: 1) rural areas, 2) urban areas, 3) users with high mobility, 4) congested urban areas, 5) congested backhaul, 6) temporary events, 7) temporary blind spots and 8) sensor networks. For these scenarios, drone cells have been investigated in the literature from different perspectives, such as drone channel modeling [3, 4, 5, 6], drone deployment and optimization of trajectories [7, 8, 9, 10, 11, 12, 13, 14], and performance analysis of drone enabled cellular systems [15, 16, 17, 18, 19]. In this work, we focus on the last aspect.††footnotetext: This work was supported in part by the Australian Research Council’s Discovery Project Funding Scheme (Project number DP170100939) and the Natural Sciences and Engineering Research Council of Canada (NSERC).

Motivation: The literature to date [15, 16, 17, 18, 19] has focused on the downlink, generally for Scenarios 1–3. In this work, we focus on the uplink for Scenario 6, i.e., using ABS to provide additional coverage for temporary events, such as concerts or sports events. Such temporary events are happening more frequently in cities all over the world with very high number of users gathering, which often leads to network congestion and poor user experience. The optimal ABS height with respect to the downlink performance does not necessarily optimize the uplink performance. For example, the distribution of the interference powers are different for the uplink and downlink cases. Moreover, the uplink is the bottleneck in such events since an increasing number of users try to share content from the event on social media applications. Therefore, assessing the usefulness of ABSs to provide uplink coverage for temporary events is an important open problem in the literature which has great practical importance as well.

Contributions: In this paper, we analyze the use of an ABS to provide coverage for a temporary event. To the best of our knowledge, this scenario has not yet been considered in the literature to date. Using stochastic geometry, we analyze the uplink coverage probability of the terrestrial base station (TBS) and the ABS. The novel contributions of this paper are:

We consider the uplink communication in a two-cell network comprised of a TBS and an ABS, where the network region S1 is a disk with radius r1, i.e., |S1|=πr21 and a TBS is located at the center. We assume that there is a temporary event held inside a stadium within the network region. The stadium’s building area S2 is modeled as a disk with radius r2 and its center is at a distance d from the TBS. To provide additional resources for the event, an ABS is deployed to act as an ABS111Current drone regulations prohibit a drone from flying over stadiums or sports events. This is expected to change in the future.. The ABS is assumed to be placed at a height of h above the center of the stadium, as shown in Fig. 1. There are Nc TsUEs served by the TBS, which are spatially distributed according to a Binomial point process (BPP) inside the network region excluding the stadium, i.e., S1∖S2. At the same time, there are Nd AsUEs on the ground inside the stadium S2. For tractability, we assume that all AsUEs are served by the ABS only. The location of AsUEs is modelled as an independent BPP in S2.

Uplink Network Model: For the spectrum efficiency, we assume that both the TBS and the ABS share the same spectrum resource, i.e., in an underlay fashion. Orthogonal multiple access technique is employed in this work. We assume that the number of the TsUEs and the AsUEs are sufficiently high. That is to say, there will always be one TsUE and one AsUE to be served per each channel at the same time. Hence, there is no interference among TsUEs (or AsUEs), but interference exists between TsUEs and AsUEs. In this work, we focus our analysis on one uplink channel since other channels share the same interference statistics.

For reliable and successful uplink communication, the TsUE controls its transmit power such that the average signal received at the TBS is equal to the threshold ρT. Power control is deployed at the AsUE. We also set a maximum transmit power constraint at the AsUE, to avoid the transmit power for AsUE going to very large when the ABS is placed at a high altitude. In other words, the AsUE compensates for the path-loss to keep the average signal power at the ABS equal to the threshold ρA if the transmit power required for the path-loss inversion is less than Pmax. Otherwise, the AsUE tries to establish an uplink connection with the ABS by transmitting with a power of Pmax. Therefore, the instantaneous transmit power for the AsUE, Pa, depends on the propagation distance between the AsUE and the ABS and can be shown as (1) at the top of the next page, where ZA is the Euclidean distance between the AsUE and the ABS.

SINR: For the considered setup, the instantaneous signal-to-interference-plus-noise ratio (SINR) at the TBS is given as

where Pt=ρTdαTBST is the TsUE transmit power. HT and HA

The instantaneous SINR at the ABS is given as

where GA and GT

where superscript b is T for TBS and A for ABS, and γb is the SINR threshold. SINRT and SINRA can be found in (2) and (3), respectively. The results for the coverage probability of the TBS and the ABS are presented in the next two subsections.

First we present two lemmas, which are used in deriving the coverage probability of the TBS in Theorem 1.

The Laplace transform of the interference power distribution at the TBS is given as (5) at the top of the this page, where

The probability density function (pdf) of the distance

ZA between the ABS at height h above the center of S2 and an i.u.d. AsUE inside S2 is

Based on the system model in Section II, the coverage probability of the TBS is

Substituting (5) and (7) into (8), we can obtain the coverage probability of the TBS.

We begin by presenting three lemmas, which will then be used to compute the coverage probability of the ABS in Theorem 2.

The proof follows the same lines as Lemma 1 and is skipped for the sake of brevity.

The pdf of the distance between the TsUE and the ABS fZT(z), and the conditional pdf of the angle, fΩ(ω|z), between the ground projection of ZT and dT are given in Lemma 4 and Lemma 5, respectively.

The pdf of the distance ZT between the ABS at height h above the center of S2 and an i.u.d. TsUE inside S1∖S2 is

The pdf of the angle, fΩ(ω|z), between the ground projection of ZT and dT conditioned on ZT is

This lemma can be proved by using cosine rule and simple trigonometry.

Based on the system model in Section II, the coverage probability of the ABS is given as (13) at the top of this page, where

s=mAAγAzαAAp and LIA(s) is given by Lemma 3. The pdf of the distance between the AsUE and the ABS fZA(z) is provided in Lemma 2.

Combining Lemma 3, 4, and 5 with Theorem 2, we can calculate the coverage probability of the ABS.

In this paper, the uplink communication in a two-cell network with a TBS and an ABS was considered. We derived the exact expressions for uplink coverage probability of the TBS and the ABS in terms of the Laplace transforms of the interference power distribution at the TBS and the ABS and the distance distribution between the ABS and an i.u.d. AsUE and between the ABS and an i.u.d. TsUE. Our results demonstrated the feasibility of establishing an underlay ABS to provide uplink coverage for temporary events. Future work can consider the impact of beamforming at the ABS and user scheduling if there are multiple UEs per channel.