In this paper, we propose a multi-channel speech source separation with a deep neural network (DNN) which is trained under the condition that no clean signal is available. As an alternative to a clean signal, the proposed method adopts an estimated speech signal by an unsupervised speech source separation with a statistical model. As a statistical model of microphone input signal, we adopts a time-varying spatial covariance matrix (SCM) model which includes reverberation and background noise submodels so as to achieve robustness against reverberation and background noise. The DNN infers intermediate variables which are needed for constructing the time-varying SCM. Speech source separation is performed in a probabilistic manner so as to avoid overfitting to separation error. Since there are multiple intermediate variables, a loss function which evaluates a single intermediate variable is not applicable. Instead, the proposed method adopts a loss function which evaluates the output probabilistic signal directly based on Kullback-Leibler Divergence (KLD). Gradient of the loss function can be back-propagated into the DNN through all the intermediate variables. Experimental results under reverberant conditions show that the proposed method can train the DNN efficiently even when the number of training utterances is small, i.e., 1K. 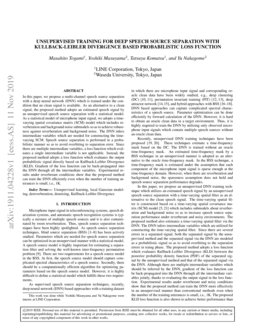 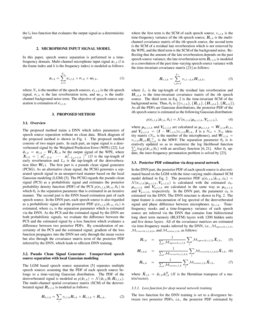 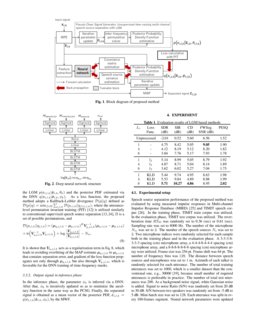 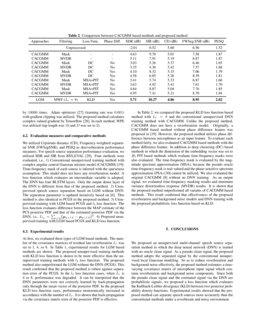 0.84(0.08,0.93) ©2019 IEEE. Personal use of this material is permitted. Permission from IEEE must be obtained for all other uses, in any current or future media, including reprinting/republishing this material for advertising or promotional purposes, creating new collective works, for resale or redistribution to servers or lists, or reuse of any copyrighted component of this work in other works.

As supervised speech source separation techniques, recently, deep neural network (DNN) based approaches with a training dataset in which there are microphone input signal and corresponding oracle clean data have been widely studied, e.g., deep clustering (DC) [10, 11], permutation invariant training (PIT) [12, 13], deep attractor network [14, 15], and hybrid approaches with BSS [16, 17, 18]. DNN based approaches can capture complicated spectral characteristics of a speech source. Parameter optimization can be done efficiently by forward calculation of the DNN. However, it is hard to obtain an oracle clean data in a target environment. Thus, it is highly required to train the DNN by utilizing only observed microphone input signals which contain multiple speech sources without an oracle clean data.

which includes submodels about reverberation and background noise so as to increase speech source separation performance under reverberant and noisy environments. The proposed method also estimates a time-varying spatial filter via the DNN. The DNN infers intermediate variables which are utilized for constructing the time-varying spatial filter. Since there are several errors in a separated signal, both the separated signal by the unsupervised method and the separated signal via the DNN are modeled as a probabilistic signal so as to avoid overfitting to the separation errors in traing phase. The proposed method adopts a loss function which evaluates Kullback-Leibler Divergence (KLD) between the posterior probability density function (PDF) of the separated signal by the unsupervised method and that of the separated signal via the DNN. Although there are multiple intermediate variables which should be inferred by the DNN, gradient of the loss function can be back-propagated into the DNN through all the intermediate variables jointly, thanks to evaluating the output signal in the loss function. Experimental results under reverberant and noisy conditions show that the proposed method can train the DNN more effectively in an unsupervised manner than conventional methods even when the number of the training utterances is small, i.e., 1K. The proposed KLD loss function is also shown to achieve better performance than the

l2 loss function that evaluates the output signal as a deterministic signal.

In this paper, speech source separation is performed in a time-frequency domain. Multi-channel microphone input signal xl,k (l is the frame index and k is the frequency index) is modeled as follows:

where Ns is the number of the speech sources, ci,l,k is the ith speech signal, rl,k is the late reverberation term, and wl,k is the multi-channel background noise term. The objective of speech source separation is estimation of ci,l,k.

The proposed method consists of two major parts. In each part, an input signal is a dereverberated signal by the Weighted Prediction Error (WPE) [22]. Let ~xl,k=xl,k−WkXl,k be the output signal of the WPE, where Xl,k=[xTl−D,k⋯xTl−Ld+1,k]T (D is the tap-length of early reverberation and Ld is the tap-length of the dereverberation filter Wk). The first part is a pseudo clean signal generator (PCSG). As an alternative clean signal, the PCSG generates a separated speech signal in an unsupervised manner based on the local Gaussian modeling (LGM) [5]. The PCSG regards the pseudo clean signal (PCS) as a probabilistic signal and estimates the posterior probability density function (PDF) of the PCS p(ci,l,k|~xl,k,θk) in which θk is the separation parameter that is estimated in an iterative manner. The second part is the DNN based estimation part of each speech source. In the DNN part, each speech source is also regarded as a probabilistic signal and the posterior PDF q(ci,l,k|~xl,k,ϕk) is estimated, where ϕk

The LGM based speech source separation [5]

separates multiple speech sources assuming that the PDF of each speech source belongs to a time-varying Gaussian distribution. The PDF of the dereverberated signal is modeled as

p(~xl,k)=N(~xl,k|0,R~x,l,k). The multi-channel spatial covariance matrix (SCM) of the dereverberated signal R~x,l,k is modeled as follows:

where the first term is the SCM of each speech source, vi,l,k

is the time-frequency variance of the

where Lr is the tap-length of the residual late reverberation and Hi,d,k is the time-invariant covariance matrix of the ith speech source. The third term in Eq. 2 is the time-invariant SCM of the background noise. Thus, θk is {{vi,l,k},{Ri,k},{Hi,d,k},{Rn,k}}. As all the PDFs are Gaussian distributions, the posterior PDF of the ith speech source is estimated as the following Gaussian distribution:

where μp,i,l,k and Vp,i,l,k are calculated as μp,i,l,k=Wi,l,k~xl,k, and Vp,i,l,k=(I−Wi,l,k)vi,l,kRi,k, I is a Nm×Nmidentity matrix (Nm is the number of the microphones), and Wi,l,k=vi,l,kRi,kR−1~x,l,k is the MWF. The separation parameter θk is iteratively updated so as to maximize the log likelihood function ∑llogp(~xl,k|θk) with an auxiliary function [6, 21]. After θk update, the inter-frequency permutation problem is solved by [23].

In the DNN part, the posterior PDF of each speech source is also estimated based on the LGM with the time-varying multi-channel SCM model defined in Eq. 2. The posterior PDF q(ci,l,k|~xl,k,ϕk)=N(ci,l,k|μq,i,l,k,Vq,i,l,k) is calculated with the estimated ϕk. μq,i,l,k and Vq,i,l,k are calculated in the same way as μp,i,l,k and Vp,i,l,k, respectively. In the DNN part, the parameter ϕk is estimated via the DNN. The DNN structure is shown in Fig. 2. The input feature is concatenation of log spectral of the dereverberated signal and phase difference between microphones η~x,l,k

where ~Xl,k=~xl,k~xHl,k (H is the Hermitian transpose of a matrix/vector).

The loss function for the DNN training is set to a divergence between two posterior PDFs, i.e., the posterior PDF estimated by the LGM p(ci,l,k|~xl,k,θk) and the posterior PDF estimated via the DNN q(ci,l,k|~xl,k,ϕk). As a loss function, the proposed method adopts a Kullback-Leibler divergence D(p||q) defined as D(p||q)=minf∈Π∑i,l,kD(pi,l,k||qf(i),l,k), where the utterance-level permutation invariant training (PIT) [12] is utilized similarly to conventional supervised speech source separation [13, 24], Π is a set of possible permutations, and D(p_i,l,k —— q_j,l,k)= (μ_q,j,l,k-μ_p,i,l,k)^HV_q,j,l,k^-1(μ_q,i,l,k-μ_p,i,l,k) +tr(V_q,j,l,k^-1V_p,i,l,k )+log—Vq,j,l,k——Vp,i,l,k—-N_m. It is shown that Vq,j,l,k acts as a regularization term in Eq. 3.3.1, which leads to avoiding overfitting of the MAP estimate μq,i,l,k to μp,i,l,k that contains separation error, and gradient of the loss function propagates not only through μq,i,l,k but also through Vq,j,l,k, which is favorable for the DNN training of time-frequency masks.

In the inference phase, the parameter ϕk is inferred via a DNN. After that, ϕk is iteratively updated so as to minimize the auxiliary function in the same way as the PCSG. Finally, the separated signal is obtained as a mean vector of the posterior PDF, ^ci,l,k=q(ci,l,k|~xl,k,ϕk), by the MWF.

Speech source separation performance of the proposed method was evaluated by using measured impulse responses in Multi-channel Impulse Response Database (MIRD) [25] and TIMIT speech corpus [26]. In the training phase, TIMIT train corpus was utilized. In the evaluation phase, TIMIT test corpus was utilized. The reverberation time RT60 was randomly set to 0.36 (sec) or 0.61 (sec). Sampling rate was set to 8000 Hz. The number of the microphone Nm was set to 2. The number of the speech sources Ns was set to 2. Two microphone indices were randomly selected for each sample both in the training phase and in the evaluation phase. A 3-3-3-8-3-3-3 spacing (cm) microphone array, a 4-4-4-8-4-4-4 spacing (cm) microphone array, and a 8-8-8-8-8-8-8 spacing (cm) microphone array were utilized. Frame size was 256 pt. Frame shift was 64 pt. The number of frequency bins was 129. The distance between speech sources and microphones was set to 1 m. Azimuth of each talker is randomly selected for each utterance. The number of total training utterances was set to 1000, which is a smaller dataset than the conventional one, e.g., 30000 [19]

, because small number of required utterances is preferable in practice. The number of total test utterances was 200. As a background noise signal, white Gaussian noise is added. Signal to noise Ratio (S/N) was randomly set from 20 dB to 30 dB. S/N between two speakers was randomly set from -5 dB to 5 dB. Mini-batch size was set to 128. Each utterance was split in every 100-frames segment. Neural network parameters were updated by

) with gradient clipping was utilized. The proposed method calculates complex-valued gradient by Tensorflow

[19]: Time-frequency mask of each source is inferred with the sparseness assumption. This model does not have any reverberation model. A loss function which evaluates an intermediate variable is adopted. The DNN has four BLSTM layers. Only the output dense layer of the DNN is different from that of the proposed method. 2) Unsupervised speech source separation based on LGM without DNN: The separation parameter is updated iteratively based on [6]. This method is also identical to PCGS in the proposed method. 3) Unsupervised training with LGM based PCGS and l2 loss function: The loss function evaluates difference between the MAP estimate of the PCS posterior PDF and that of the estimated posterior PDF via the DNN, i.e., Ll2=∑i,l,k∥μq,i,l,k−μp,i,l,k∥2. 4) Proposed unsupervised training with LGM based PCGS and KLD loss function.

At first, we evaluated three types of LGM based methods. The number of the covariance matrices of residual late reverberation Lr was set to 1, 4, or 8. In Table 1, experimental results for LGM based methods are shown. The proposed unsupervised training methods with KLD loss function is shown to be more effective than the unsupervised training methods with l2 loss function. The proposed method also outperformed the LGM without the DNN (PCGS). This result confirmed that the proposed method is robust against separation error of the PCGS. In the l2 loss function cases, when Lr is 4 or 8, performance was degraded. It can be interpreted that the DNN parameters were not correctly learned by back-propagation only through the mean vector of the posterior PDF. In the proposed KLD loss function cases, performance monotonically increased in accordance with the number of Lr. It is shown that back-propagation via the covariance matrix term of the posterior PDF is effective.

We proposed an unsupervised multi-channel speech source separation method in which the deep neural network (DNN) is trained with no oracle clean signal. As a pseudo clean signal, the proposed method adopts the separated signal by the conventional unsupervised local Gaussian modeling. So as to reduce reverberation and background noise effectively, the proposed method estimates a time-varying covariance matrix of microphone input signal which contains reverberation and background noise components. Since both the pseudo clean signal and the estimated signal via the DNN are probabilistic signals, we proposed a loss function which evaluates the Kullback-Leibler divergence (KLD) between two posterior probability density functions. Experimental results showed that the proposed method can separate speech sources more accurately than the conventional methods under a reverberant and noisy environment.