Previous traditional approaches to unsupervised Chinese word segmentation (CWS) can be roughly classified into discriminative and generative models. The former uses the carefully designed goodness measures for candidate segmentation, while the latter focuses on finding the optimal segmentation of the highest generative probability. However, while there exists a trivial way to extend the discriminative models into neural version by using neural language models, those of generative ones are non-trivial. In this paper, we propose the segmental language models (SLMs) for CWS. Our approach explicitly focuses on the segmental nature of Chinese, as well as preserves several properties of language models. In SLMs, a context encoder encodes the previous context and a segment decoder generates each segment incrementally. As far as we know, we are the first to propose a neural model for unsupervised CWS and achieve competitive performance to the state-of-the-art statistical models on four different datasets from SIGHAN 2005 bakeoff. 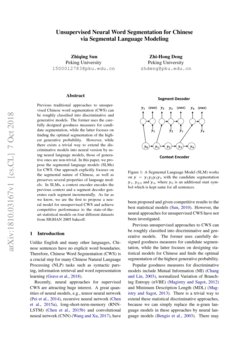 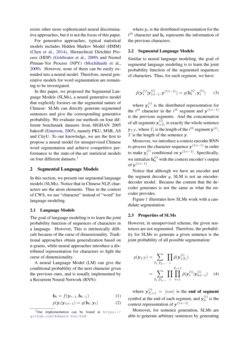 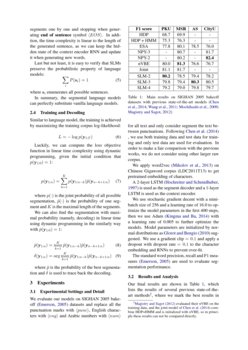 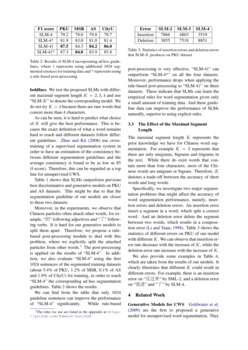 We present an unsupervised word segmentation model, in which the learnin...
Lihao Wang, et al. ∙

Word segmentation is a low-level NLP task that is non-trivial for a cons...
Yan Shao, et al. ∙

Neural or Statistical: An Empirical Study on Language Models for Chinese Input Recommendation on Mobile

Unlike English and many other languages, Chinese sentences have no explicit word boundaries. Therefore, Chinese Word Segmentation (CWS) is a crucial step for many Chinese Natural Language Processing (NLP) tasks such as syntactic parsing, information retrieval and word representation learning

(Wang and Xu, 2017), have been proposed and given competitive results to the best statistical models (Sun, 2010). However, the neural approaches for unsupervised CWS have not been investigated.

Previous unsupervised approaches to CWS can be roughly classified into discriminative and generative models. The former uses carefully designed goodness measures for candidate segmentation, while the latter focuses on designing statistical models for Chinese and finds the optimal segmentation of the highest generative probability.

(Bengio et al., 2003). There may exists other more sophisticated neural discriminative approaches, but it is not the focus of this paper.

(Chen et al., 2014), Hierarchical Dirichlet Process (HDP) (Goldwater et al., 2009) and Nested Pitman-Yor Process (NPY) (Mochihashi et al., 2009). However, none of them can be easily extended into a neural model. Therefore, neural generative models for word segmentation are remaining to be investigated.

In this paper, we proposed the Segmental Language Models (SLMs), a neural generative model that explicitly focuses on the segmental nature of Chinese: SLMs can directly generate segmented sentences and give the corresponding generative probability. We evaluate our methods on four different benchmark datasets from SIGHAN 2005 bakeoff (Emerson, 2005), namely PKU, MSR, AS and CityU. To our knowledge, we are the first to propose a neural model for unsupervised Chinese word segmentation and achieve competitive performance to the state-of-the-art statistical models on four different datasets.111Our implementation can be found at https://github.com/Edward-Sun/SLM

In this section, we present our segmental language models (SLMs). Notice that in Chinese NLP, characters are the atom elements. Thus in the context of CWS, we use “character” instead of “word” for language modeling.

The goal of language modeling is to learn the joint probability function of sequences of characters in a language. However, This is intrinsically difficult because of the curse of dimensionality. Traditional approaches obtain generalization based on n-grams, while neural approaches introduce a distributed representation for characters to fight the curse of dimensionality.

A neural Language Model (LM) can give the conditional probability of the next character given the previous ones, and is usually implemented by a Recurrent Neural Network (RNN):

where yt is the distributed representation for the tth character and ht represents the information of the previous characters.

Moreover, we introduce a context encoder RNN to process the character sequence y(1:i−1) in order to make y(i)t conditional on y(1:i−1). Specifically, we initialize h(i)0 with the context encoder’s output of y(1:i−1).

Notice that although we have an encoder and the segment decoder g, SLM is not an encoder-decoder model. Because the content that the decoder generates is not the same as what the encoder provides.

Figure 1 illustrates how SLMs work with a candidate segmentation.

where y(i)Ti+1=⟨eos⟩ is the end of segment symbol at the end of each segment, and y(i)0 is the context representation of y(1:i−1).

Moreover, for sentence generation, SLMs are able to generate arbitrary sentences by generating segments one by one and stopping when generating end of sentence symbol ⟨EOS⟩. In addition, the time complexity is linear to the length of the generated sentence, as we can keep the hidden state of the context encoder RNN and update it when generating new words.

Last but not least, it is easy to verify that SLMs preserve the probabilistic property of language models:

where si enumerates all possible sentences.

Luckily, we can compute the loss objective function in linear time complexity using dynamic programming, given the initial condition that p(y1:0)=1:

We can also find the segmentation with maximal probability (namely, decoding) in linear time using dynamic programming in the similarly way with ¯p(y1:0)=1:

where ¯p is the probability of the best segmentation and δ is used to trace back the decoding.

We evaluate our models on SIGHAN 2005 bakeoff (Emerson, 2005) datasets and replace all the punctuation marks with ⟨punc⟩, English characters with ⟨eng⟩ and Arabic numbers with ⟨num⟩ for all text and only consider segment the text between punctuations. Following Chen et al. (2014) , we use both training data and test data for training and only test data are used for evaluation. In order to make a fair comparison with the previous works, we do not consider using other larger raw corpus.

We use stochastic gradient decent with a mini-batch size of 256 and a learning rate of 16.0 to optimize the model parameters in the first 400 steps, then we use Adam (Kingma and Ba, 2014)

with a learning rate of 0.005 to further optimize the models. Model parameters are initialized by normal distributions as

suggested. We use a gradient clip

=0.1 and apply a dropout with dropout rate =0.1 to the character embedding and RNNs to prevent over-fit.

Our final results are shown in Table 1, which lists the results of several previous state-of-the-art methods222Magistry and Sagot (2012) evaluated their nVBE on the training data, and the joint model of Chen et al. (2014) combine HDP+HMM and is initialized with nVBE, so in principle these results can not be compared directly., where we mark the best results in boldface. We test the proposed SLMs with different maximal segment length K=2,3,4 and use “SLM-K” to denote the corresponding model. We do not try K>4 because there are rare words that consist more than 4 characters.

As can be seen, it is hard to predict what choice of K will give the best performance. This is because the exact definition of what a word remains hard to reach and different datasets follow different guidelines. Zhao and Kit (2008)

use cross-training of a supervised segmentation system in order to have an estimation of the consistency between different segmentation guidelines and the average consistency is found to be as low as 85 (f-score). Therefore, this can be regarded as a top line for unsupervised CWS.

Table 1 shows that SLMs outperform previous best discriminative and generative models on PKU and AS datasets. This might be due to that the segmentation guideline of our models are closer to these two datasets.

Moreover, in the experiments, we observe that Chinese particles often attach other words, for example, “的” following adjectives and “了” following verbs. It is hard for our generative models to split them apart. Therefore, we propose a rule-based post-processing module to deal with this problem, where we explicitly split the attached particles from other words.333The rules we use are listed in the appendix at https://github.com/Edward-Sun/SLM. The post-processing is applied on the results of “SLM-4”. In addition, we also evaluate “SLM-4” using the first 1024 sentences of the segmented training datasets (about 5.4% of PKU, 1.2% of MSR, 0.1% of AS and 1.9% of CityU) for training, in order to teach “SLM-4” the corresponding ad hoc segmentation guidelines. Table 2 shows the results.

We can find from the table that only 1024 guideline sentences can improve the performance of “SLM-4” significantly. While rule-based post-processing is very effective, “SLM-4†” can outperform “SLM-4*” on all the four datasets. Moreover, performance drops when applying the rule-based post-processing to “SLM-4†” on three datasets. These indicate that SLMs can learn the empirical rules for word segmentation given only a small amount of training data. And these guideline data can improve the performance of SLMs naturally, superior to using explicit rules.

3.3 The Effect of the Maximal Segment Length

The maximal segment length K represents the prior knowledge we have for Chinese word segmentation. For example K=3 represents that there are only unigrams, bigrams and trigrams in the text. While there do exist words that contain more than four characters, most of the Chinese words are unigram or bigram. Therefore, K denotes a trade-off between the accuracy of short words and long words.

We also provide some examples in Table 4, which are taken from the results of our models. It clearly illustrates that different K could result in different errors. For example, there is an insertion error on “反过来” by SML-2, and a deletion error on “促进” and “了” by SLM-4.

Goldwater et al. (2009) are the first to proposed a generative model for unsupervised word segmentation. They built a nonparametric Bayesian bigram language model based on HDP (Teh et al., 2005). Mochihashi et al. (2009) proposed a Bayesian hierarchical language model using Pitman-Yor (PY) process, which can generate sentences hierarchically. Chen et al. (2014) proposed a Bayesian HMM model for unsupervised CWS inspired by the character-based scheme in supervised CWS task, where the hidden state of charaters are set to {Single,Begin,End,Middle} to represents their corresponding positions in the words. The segmental language model is not a neural extension of the above statistical models, as we model the segments directly.

Sequence modeling via segmentations has been well investigated by Wang et al. (2017), where they proposed the Sleep-AWake Network (SWAN) for speech recognition. SWAN is similar to SLM. However, SLMs do not have sleep-awake states. And SLMs predict the following segment given the previous context while SWAN tries to recover the information in the encoded state. Therefore, the key difference is that SLMs are unsupervised language models while SWANs are supervised seq2seq models. Thereafter, Huang et al. (2017) successfully apply SWAN in their phrase-based machine translation. Another related work in machine translation is the online segment to segment neural transduction (Yu et al., 2016), where the model is able to capture unbounded dependencies in both the input and output sequences. Kong (2017) also proposed a Segmental Recurrent Neural Network (SRNN) with CTC to solve segmental labeling problems.

In this paper, we proposed a neural generative model for fully unsupervised Chinese word segmentation (CWS). To the best of knowledge, this is the first neural model for CWS. Our segmental language model is an intuitive generalization of vanilla neural language models that directly modeling the segmental nature of Chinese. Experimental results show that our models achieve competitive performance to the previous state-of-the-art statistical models on four datasets from SIGHAN 2005. We also show the improvement of incorporating ad hoc guidelines into our segmental language models. Our future work may include the following two directions.

This work is supported by the National Training Program of Innovation for Undergraduates (URTP2017PKU001). We would also like to thank the anonymous reviewers for their helpful comments.