This paper presents an unsupervised method to learn a neural network, namely an explainer, to interpret a pre-trained convolutional neural network (CNN), i.e., the explainer uses interpretable visual concepts to explain features in middle conv-layers of a CNN. Given feature maps of a conv-layer of the CNN, the explainer performs like an auto-encoder, which decomposes the feature maps into object-part features. The object-part features are learned to reconstruct CNN features without much loss of information. We can consider the disentangled representations of object parts a paraphrase of CNN features, which help people understand the knowledge encoded by the CNN. More crucially, we learn the explainer via knowledge distillation without using any annotations of object parts or textures for supervision. In experiments, our method was widely used to interpret features of different benchmark CNNs, and explainers significantly boosted the feature interpretability without hurting the discrimination power of the CNNs. 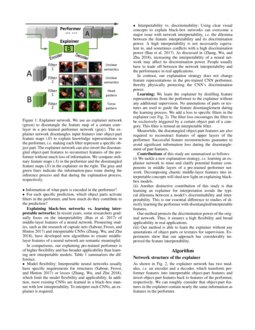 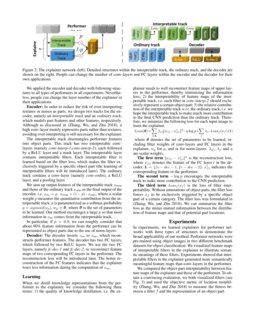 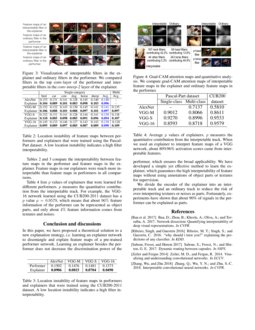 Quanshi Zhang is with the John Hopcroft Center and the MoE Key Lab of Artificial Intelligence, AI Institute, Shanghai Jiao Tong University. Yu Yang and Ying Nian Wu are with the Center for Vision, Cognition, Learning, and Autonomy, University of California, Los Angeles.

Motivation, diagnosis of features inside CNNs:

In recent years, real applications usually propose new demands for deep learning beyond the accuracy. The CNN needs to earn trust from people for safety issues, because a high accuracy on testing images cannot always ensure that the CNN encodes correct features. Instead, the CNN sometimes uses unreliable reasons for prediction.

Therefore, this study aim to provide a generic tool to examine middle-layer features of a CNN to ensure the safety in critical applications. Unlike previous visualization [Zeiler and Fergus2014] and diagnosis [Bau et al.2017, Ribeiro, Singh, and Guestrin2016] of CNN representations, we focus on the following two new issues, which are of special values in feature diagnosis.

∙Disentanglement of interpretable and uninterpretable feature information is necessary for a rigorous and trustworthy examination of CNN features. Each filter of a conv-layer usually encodes a mixture of various semantics and noises (see Fig. 1). As discussed in [Bau et al.2017], filters in high conv-layers mainly represent “object parts”222[Zhang, Wu, and Zhu2018] considers both semantics of “objects” and “parts” as parts., and “material” and “color” information in high layers is not salient enough for trustworthy analysis. In particular, part features are usually more localized and thus is more helpful in feature diagnosis.

Therefore, in this paper, we propose to disentangle part features from another signals and noises. For example, we may quantitatively disentangle 90% information of CNN features as object parts and interpret the rest 10% as textures and noises.

∙Semantic explanations: Given an input image, we aim to use clear visual concepts (here, object parts) to interpret chaotic CNN features. In comparisons, network visualization and diagnosis mainly illustrate the appearance corresponding to a network output/filter, without physically modeling or quantitatively summarizing strict semantics. As shown in Fig. 4, our method identifies which parts are learned and used for the prediction as more fine-grained explanations for CNN features.

Tasks, learning networks to explain networks: In this paper, we propose a new explanation strategy to boost feature interpretability. I.e. given a pre-trained CNN, we learn another neural network, namely a explainer network, to translate chaotic middle-layer features of the CNN into semantically meaningful object parts. More specifically, as shown in Fig. 1, the explainer decomposes middle-layer feature maps into elementary feature components of object parts. Accordingly, the pre-trained CNN is termed a performer network.

In the scenario of this study, the performer is well pre-trained for superior performance. We attach the explainer onto the performer without affecting the original discrimination power of the performer.

Explaining black-box networks vs. learning interpretable networks: In recent years, some researchers gradually focus on the interpretability [Bau et al.2017] of middle-layer features of a neural network. Pioneering studies, such as the research of capsule nets [Sabour, Frosst, and Hinton2017] and interpretable CNNs [Zhang, Wu, and Zhu2018], have developed new algorithms to ensure middle-layer features of a neural network are semantic meaningful.

In contrast, our explanation strategy does not change feature representations in the pre-trained CNN performer, thereby physically protecting the CNN’s discrimination power.

Learning: We learn the explainer by distilling feature representations from the performer to the explainer without any additional supervision. No annotations of parts or textures are used to guide the feature disentanglement during the learning process. We add a loss to specific filters in the explainer (see Fig. 2). The filter loss encourages the filter to be exclusively triggered by a certain object part of a category. This filter is termed an interpretable filter.

Contributions of this study are summarized as follows.

(i) We tackle a new explanation strategy, i.e. learning an explainer network to mine and clarify potential feature components in middle layers of a pre-trained performer network. Decomposing chaotic middle-layer features into interpretable concepts will shed new light on explaining black-box models.

(ii) Another distinctive contribution of this study is that learning an explainer for interpretation avoids the typical dilemma between a model’s discriminability and interpretability. This is our essential difference to studies of directly learning the performer with disentangled/interpretable features.

Our method protects the discrimination power of the original network. Thus, it ensures a high flexibility and broad applicability in real applications.

(iii) Our method is able to learn the explainer without any annotations of object parts or textures for supervision. Experiments show that our approach has considerably improved the feature interpretability.

Network structure of the explainer

We applied the encoder and decoder with following structures to all types of performers in all experiments. Nevertheless, people can change the layer number of the explainer in their applications.

Encoder: In order to reduce the risk of over-interpreting textures or noises as parts, we design two tracks for the encoder, namely an interpretable track and an ordinary track, which models part features and other features, respectively. Although as discussed in [Zhang, Wu, and Zhu2018], a high conv-layer mainly represents parts rather than textures, avoiding over-interpreting is still necessary for the explainer.

conv-ordin), a ReLU layer, and a pooling layer.

is parameterized as a softmax probability

p=sigmoid(wp), wp∈θ, where θ is the set of parameters to be learned. Our method encourages a large p so that most information in xenc comes from the interpretable track.

In particular, if p=0.9, we can roughly consider that about 90% feature information from the performer can be represented as object parts due to the use of norm-layers.

Decoder: The decoder inverts xenc to xdec, which reconstructs performer features. The decoder has two FC layers, which followed by two ReLU layers. We use the two FC layers, namely fc-dec-1 and fc-dec-2, to reconstruct feature maps of two corresponding FC layers in the performer. The reconstruction loss will be introduced later. The better reconstruction of the FC features indicates that the explainer loses less information during the computation of xenc.

where θ denotes the set of parameters to be learned, including filter weights of conv-layers and FC layers in the explainer, wp for p, and α for norm-layers. λ(l),λf and η are scalar weights.

The first term ∥x(l)−x∗(l)∥2 is the reconstruction loss, where x(l) denotes the feature of the FC layer l in the decoder, L={fc−dec−1,fc−dec−2}. x∗(l) indicates the corresponding feature in the performer.

The second term −logp encourages the interpretable track to make more contribution to the CNN prediction.

The third term Lossf(xf) is the loss of filter interpretability. Without annotations of object parts, the filter loss forces xf to be exclusively triggered by a specific object part of a certain category. The filter loss was formulated in [Zhang, Wu, and Zhu2018]. We can summarize the filter loss as the minus mutual information between the distribution of feature maps and that of potential part locations.

In experiments, we learned explainers for performer networks with three types of structures to demonstrate the broad applicability of our method. Performer networks were pre-trained using object images in two different benchmark datasets for object classification. We visualized feature maps of interpretable filters in the explainer to illustrate semantic meanings of these filters. Experiments showed that interpretable filters in the explainer generated more semantically meaningful feature maps than conv-layers in the performer.

We compared the object-part interpretability between feature maps of the explainer and those of the performer. To obtain a convincing evaluation, we both visualized filters (see Fig. 3) and used the objective metric of location instability [Zhang, Wu, and Zhu2018] to measure the fitness between a filter f and the representation of an object part.

Table 4 lists p values of explainers that were learned for different performers. p measures the quantitative contribution from the interpretable track. For example, the VGG-16 network learned using the CUB200-2011 dataset has a p value p=0.9579, which means that about 96% feature information of the performer can be represented as object parts, and only about 4% feature information comes from textures and noises.

In this paper, we have proposed a theoretical solution to a new explanation strategy, i.e. learning an explainer network to disentangle and explain feature maps of a pre-trained performer network. Learning an explainer besides the performer does not decrease the discrimination power of the performer, which ensures the broad applicability. We have developed a simple yet effective method to learn the explainer, which guarantees the high interpretability of feature maps without using annotations of object parts or textures for supervision.

We divide the encoder of the explainer into an interpretable track and an ordinary track to reduce the risk of over-interpreting textures or noises as parts. Fortunately, experiments have shown that about 90% of signals in the performer can be explained as parts.