When deep learning is applied to visual object recognition, data augmentation is often used to generate additional training data without extra labeling cost. It helps to reduce overfitting and increase the performance of the algorithm. In this paper we investigate if it is possible to use data augmentation as the main component of an unsupervised feature learning architecture. To that end we sample a set of random image patches and declare each of them to be a separate single-image surrogate class. We then extend these trivial one-element classes by applying a variety of transformations to the initial 'seed' patches. Finally we train a convolutional neural network to discriminate between these surrogate classes. The feature representation learned by the network can then be used in various vision tasks. We find that this simple feature learning algorithm is surprisingly successful, achieving competitive classification results on several popular vision datasets (STL-10, CIFAR-10, Caltech-101). 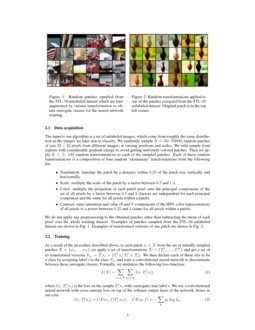 [17, 24]. While deep convolutional neural networks have been known to yield good results on supervised image classification tasks such as MNIST for a long time [18], the recent successes are made possible through optimized implementations, efficient model averaging and data augmentation techniques [17]

. The feature representation learned by these networks achieves state of the art performance not only on the classification task the network is trained for, but also on various other computer vision tasks, for example: classification on Caltech-101

. This capability to generalize to new datasets indicates that supervised discriminative learning is currently the best known algorithm for visual feature learning. The downside of this approach is the need for expensive labeling, as the amount of required labels grows quickly the larger the model gets. For this reason unsupervised learning, although currently underperforming, remains an appealing paradigm, since it can make use of raw unlabeled images and videos which are readily available in virtually infinite amounts.

In this work we aim to combine the power of discriminative supervised learning with the simplicity of unsupervised data acquisition. The main novelty of our approach is the way we obtain training data for a convolutional network in an unsupervised manner. In the standard supervised setting there exists a large set of labeled images, which may be further augmented by small translations, rotations or color variations to generate even more (and more diverse) training data.

In contrast, our method does not require any labeled data at all: we use the augmentation step alone to create surrogate training data from a set of unlabeled images. We start with trivial surrogate classes consisting of one random image patch each, and then augment the data by applying a random set of transformations to each patch. After that we train a convolutional neural network to classify these surrogate classes. The feature representation learned by the network is, by construction, discriminative and at the same time invariant to typical data transformations. Nevertheless it is not immediately clear: Would the feature representation learned from this surrogate task perform well on general image classification problems? Our experiments show that, indeed, this simple unsupervised feature learning algorithm achieves competitive or state of the art results on several benchmarks.

By performing image augmentation we provide prior knowledge about natural image distribution to the training algorithm. More precisely, by assigning the same label to all transformed versions of an image patch we force the learned feature representation to be invariant to the transformations applied. This can be seen as an indirect form of supervision: our algorithm needs some expert knowledge about which transformations the features should be invariant to. However, similar expert knowledge is used in most other unsupervised feature learning algorithms. Features are usually learned from small image patches, which assumes translational invariance. Turning images to grayscale assumes invariance to color changes. Whitening or contrast normalization assumes invariance to contrast changes and, largely, color variations.

Our approach is related to a large body of work on unsupervised learning and convolutional neural networks. In contrast to our method, most unsupervised learning approaches, e.g. [13, 14, 23, 6, 25], rely on modeling the input distribution explicitly – often via a reconstruction error term – rather than training a discriminative model and thus cannot be used to jointly train multiple layers of a deep neural network in a straightforward manner. Among these unsupervised methods, most similar to our approach are several studies on learning invariant representations from transformed input samples, for example [22, 25, 15].

Our proposed method can be related to work on metric learning, for example [10, 12]. However, instead of enforcing a metric on the feature representation directly, as in [12], we only implicitly force the representation of transformed images to be mapped close together through the introduced surrogate labels. This enables us to use discriminative training for learning a feature representation which performs well in classification tasks.

Learning invariant features with a discriminative objective was previously considered in early work on tangent propagation [21], which aims to learn features invariant to small predefined transformations by directly penalizing the derivative of the network output with respect to the parameters of the transformation. In contrast to their work, our algorithm does not rely on labeled data and is less dependent on a small magnitude of the applied transformations. Tangent propagation has been successfully combined with an unsupervised feature learning algorithm in [20] to build a classifier exploiting information about the manifold structure of the learned representation. This, however, again comes with the disadvantages of reconstruction-based training.

Loosely related to our work is research on using unlabeled data for regularizing supervised algorithms, for example self-training [2] or entropy regularization [11, 19]. In contrast to these semi-supervised methods, our training procedure, as mentioned before, does not make any use of labeled data. Finally, the idea of creating a pseudo-task to improve the performance of a supervised algorithm is used in [1].

Here we describe in detail our feature learning pipeline. The two main stages of our approach are generating the surrogate training data and training a convolutional neural network using this data.

The input to our algorithm is a set of unlabeled images, which come from roughly the same distribution as the images we later aim to classify. We randomly sample N∈[50,32000] random patches of size 32×32 pixels from different images, at varying positions and scales. We only sample from regions with considerable gradient energy to avoid getting uniformly colored patches. Then we apply K∈[1,100] random transformations to each of the sampled patches. Each of these random transformations is a composition of four random ’elementary’ transformations from the following list:

As a result of the procedure described above, to each patch xi∈X from the set of initially sampled patches X={x1,…xN} we apply a set of transformations Ti={T1i,…,TKi} and get a set of its transformed versions Sxi=Tixi={Tjixi|Tji∈Ti}. We then declare each of these sets to be a class by assigning label i to the class Sxi

and train a convolutional neural network to discriminate between these surrogate classes. Formally, we minimize the following loss function:

where l(i,Tjixi) is the loss on the sample Tjixi with (surrogate) true label i. We use a convolutional neural network with cross entropy loss on top of the softmax output layer of the network, hence in our case

where f denotes the function computing the values of the output layer of the neural network given the input data, and ei is the i

For training the network we use an implementation based on the fast convolutional neural network code from [17], modified to support dropout. We use a fixed network architecture in all experiments: 2 convolutional layers with 64 filters of size 5×5 each followed by 1 fully connected layer of 128neurons with dropout and a softmax layer on top. We perform 2×2max-pooling after convolutional layers and do not perform any contrast normalization between layers. We start with a learning rate of 0.01 and gradually decrease the learning rate during training. That is, we train until there is no improvement in validation error, then decrease the learning rate by a factor of 3, and repeat this procedure several times until there is no more significant improvement in validation error.

In some of our experiments, in which the number of surrogate classes is large relative to the number of training samples per surrogate class, we observed that during the training process the training error does not significantly decrease compared to initial chance level. To alleviate this problem, before training the network on the whole surrogate dataset we pre-train it on a subset with fewer surrogate classes, typically 100. We stop the pre-training as soon as the training error starts falling, indicating that the optimization found a direction towards a good local minimum. We then use the weights learned by this pre-training phase as an initialization for training on the whole surrogate dataset.

When the training procedure is finished, we apply the learned feature representation to classification tasks on ’real’ datasets, consisting of images which may differ in size from the surrogate training images. To extract features from these new images, we convolutionally compute the responses of all the network layers except the top softmax and form a 3-layer spatial pyramid of them. We then train a linear support vector machine (SVM) on these features. We select the hyperparameters of the SVM via crossvalidation.

We report our classification results on the STL-10, CIFAR-10 and Caltech-101 datasets, approaching or exceeding state of the art for unsupervised algorithms on each of them. We also evaluate the effects of the number of surrogate classes and the number of training samples per surrogate class in the training data. For training the network in all our experiments we generate a surrogate dataset using patches extracted from the STL-10 unlabeled dataset.

In Table 1 we compare our classification results to other recent work. Our network is trained on a surrogate dataset with 8000 surrogate classes containing 150 samples each. We remind that for extracting features during test time we use the first 3 layers of the network with 64, 64 and 128 filters respectively. The feature representation is hence considerably more compact than in most competing approaches. We do not list the results of supervised methods on CIFAR-10 (the best of which currently exceed 90% accuracy), since those are not directly comparable to our unsupervised feature learning method.

As can be seen in the table, our results are comparable to state of the art on CIFAR-10 and exceed the performance of many unsupervised algorithms on Caltech-101. On STL-10 for which the image distribution of the test dataset is closest to the surrogate samples our algorithm reaches 67.4%±0.6% accuracy outperforming all other approaches by a large margin.

3.2 Influence of the data acquisition on classification performance

we also show, as a baseline, the classification performance of random filters (all weights are sampled from a normal distribution with standard deviation

0.001, all biases are set to zero). Initializing the random filters does not require any training data and can hence be seen as using 0 samples per surrogate class. Error bars in Fig. 4 show the standard deviations computed when testing on 10 folds of the STL-10 dataset.

We proposed a simple unsupervised feature learning approach based on data augmentation that shows good results on a variety of classification tasks. While our approach sets the state of the art on STL-10 it remains to be seen whether this success can be translated into consistently better performance on other datasets.

The performance of our method saturates when the number of surrogate classes increases. One probable reason for this is that the surrogate task we use is relatively simple and does not allow the network to learn complex invariances such as 3D viewpoint invariance or inter-instance invariance. We hypothesize that our unsupervised feature learning method could learn more powerful higher-level features if the surrogate data were more similar to real-world labeled datasets. This could be achieved by using extra weak supervision provided for example by video data or a small number of labeled samples. Another possible way of obtaining richer surrogate training data would be (unsupervised) merging of similar surrogate classes. We see these as interesting directions for future work.

We acknowledge funding by the ERC Starting Grant VideoLearn (279401).