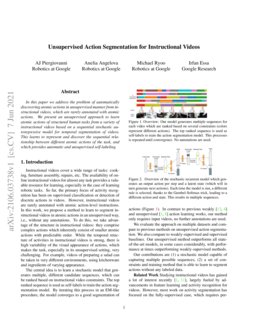 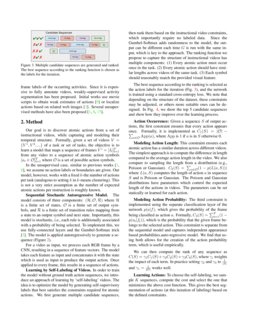 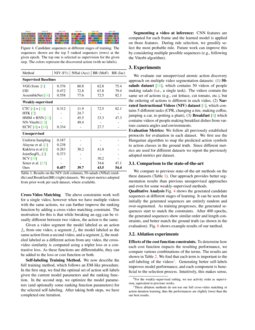 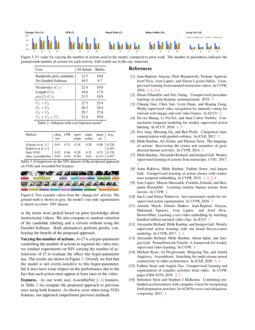 In this paper we address the problem of automatically discovering atomic...
AJ Piergiovanni, et al. ∙

In this paper, we introduce a new hierarchical model for human action re...
Ivan Lillo, et al. ∙

A Benchmark for Structured Procedural Knowledge Extraction from Cooking Videos

Procedural knowledge, which we define as concrete information about the ...
Frank F. Xu, et al. ∙

Am I a Baller? Basketball Performance Assessment from First-Person Videos

The central idea is to learn a stochastic model that generates multiple, different candidate sequences, which can be ranked based on instructional video constraints. The top ranked sequence is used as self-labels to train the action segmentation model. By iterating this process in an EM-like procedure, the model converges to a good segmentation of actions (Figure 1). In contrast to previous weakly [12, 4] and unsupervised [1, 8] action learning works, our method only requires input videos, no further annotations are used.

Our contributions are (1) a stochastic model capable of capturing multiple possible sequences, (2) a set of constraints and training method that is able to learn to segment actions without any labeled data.

, largely fueled by advancements in feature learning and activity recognition for videos. However, most work on activity segmentation has focused on the fully-supervised case, which requires per-frame labels of the occurring activities. Since it is expensive to fully annotate videos, weakly-supervised activity segmentation has been proposed. Initial works use movie scripts to obtain weak estimates of actions

[9] or localize actions based on related web images [3]. Several unsupervised methods have also been proposed [1, 8, 15].

Our goal is to discover atomic actions from a set of instructional videos, while capturing and modeling their temporal structure. Formally, given a set of videos V={V1,V2,...} of a task or set of tasks, the objective is to learn a model that maps a sequence of frames Vi=[It]Tt=1 from any video to a sequence of atomic action symbols [at∈O]Tt=1 where O is a set of possible action symbols.

In the unsupervised case, similar to previous works [1, 8], we assume no action labels or boundaries are given. Our model, however, works with a fixed k-the number of actions per task (analogous to setting k in k-means clustering). This is not a very strict assumption as the number of expected atomic actions per instruction is roughly known.

is a finite set of transition rules mapping from a state to an output symbol and next state. Importantly, this model is stochastic, i.e., each rule is additionally associated with a probability of being selected. To implement this, we use fully-connected layers and the Gumbel-Softmax trick

[5]. The model is applied autoregressively to generate a sequence (Figure 2).

For a video as input, we process each RGB frame by a CNN, resulting in a sequence of feature vectors. The model takes each feature as input and concatenates it with the state which is used as input to produce the output action. Once applied to every frame, this results in a sequence of actions.

Learning by Self-Labeling of Videos. In order to train the model without ground truth action sequences, we introduce an approach of learning by ‘self-labeling’ videos. The idea is to optimize the model by generating self-supervisory labels that best satisfies the constraints required for atomic actions. We first generate multiple candidate sequences, then rank them based on the instructional video constraints, which importantly require no labeled data. Since the Gumbel-Softmax adds randomness to the model, the output can be different each time G is run with the same input, which is key to the approach. The ranking function we propose to capture the structure of instructional videos has multiple components: (1) Every atomic action must occur once in the task. (2) Every atomic action should have similar lengths across videos of the same task. (3) Each symbol should reasonably match the provided visual feature.

The best sequence according to the ranking is selected as the action labels for the iteration (Fig. 3), and the network is trained using a standard cross-entropy loss. We note that depending on the structure of the dataset, these constraints may be adjusted, or others more suitable ones can be designed. In Fig. 4, we show the top 5 candidate sequences and show how they improve over the learning process.

Action Occurrence: Given a sequence S of output actions, the first constraint ensures that every action appears once. Formally, it is implemented as C1(S)=|O|−∑a∈OApp(a), where App is 1 if a is in S otherwise 0.

Modeling Action Length: This constraint ensures each atomic action has a similar duration across different videos. The simplest approach is to compute the difference in length compared to the average action length in the video. We also compare to sampling the length from a distribution (e.g., Poisson or Gaussian). C2(S)=∑a∈O(1−p(L(a,S))) where L(a,S) computes the length of action a in sequence S

and is Poisson or Gaussian. The Poisson and Gaussian distributions have parameters which control the expected length of the actions in videos. The parameters can be set statically or learned for each action.

, which gives the probability of the frame being classified as action

a. Formally, C3(S)=∑Tt=1(1−p(at|ft)), which is the probability that the given frame belongs to the selected action. This constraint is separate from the sequential model and captures independent appearance based probabilities.auto-regressive model. We find that using both allows for the creation of the action probability term, which is useful empirically.

Learning Actions: To choose the self-labeling, we sample K sequences, compute the cost and select the one that minimizes the above cost function. This gives the best segmentation of actions (at this iteration of labeling) based on the defined constraints.

The above constraints work well for a single video, however when we have multiple videos with the same actions, we can further improve the ranking function by adding a cross-video matching constraint. The motivation for this is that while breaking an egg can be visually different between two videos, the action is the same.

Self-labeling Training Method. We now describe the full training method, which follows an EM-like procedure. In the first step, we find the optimal set of action self-labels given the current model parameters and the ranking function. In the second step, we optimize the model parameters (and optionally some ranking function parameters) for the selected self-labeling. After taking both steps, we have completed one iteration.

Segmenting a video at inference: CNN features are computed for each frame and the learned model is applied on those features. During rule selection, we greedily select the most probable rule. Future work can improve this by considering multiple possible sequences (e.g., following the Viterbi algorithm).

00footnotetext: For the weakly-supervised setting, we use activity order as supervision, equivalent to previous works.

Evaluation Metrics: We follow all previously established protocols for evaluation in each dataset. We first use the Hungarian algorithm to map the predicted action symbols to action classes in the ground truth. Since different metrics are used for different datasets we report the previously adopted metrics per dataset.

3.1 Comparison to the state-of-the-art

We compare to previous state-of-the-art methods on the three datasets (Table 1). Our approach provides better segmentation results than previous unsupervised approaches and even for some weakly-supervised methods.

Effects of the cost function constraints. To determine how each cost function impacts the resulting performance, we compare various combinations of the terms. The results are shown in Table 2. We find that each term is important to the self-labeling of the videos111These ablation methods do not use our full cross-video matching or action duration learning, thus the performances are slightly lower than the our best results.. Generating better self-labels improves model performance, and each component is beneficial to the selection process. Intuitively, this makes sense, as the terms were picked based on prior knowledge about instructional videos. We also compare to random selection of the candidate labeling and a version without using the Gumbel-Softmax. Both alternatives perform poorly, confirming the benefit of the proposed approach.

Features. As our work uses AssembleNet [14] features, in Table 3 we compare the proposed approach to previous ones using both features. As shown, even when using VGG features, our approach outperforms previous methods.