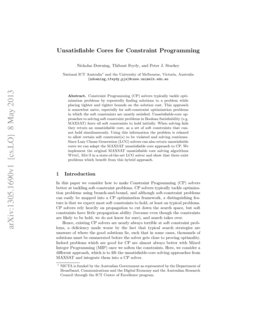 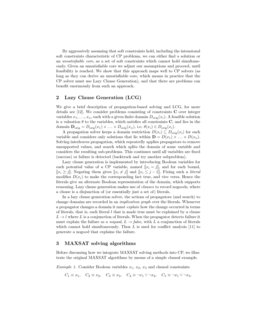 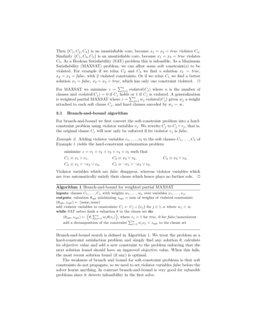 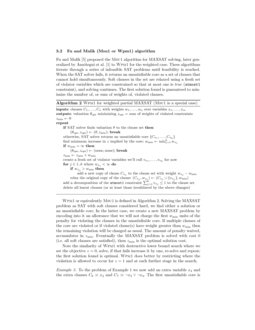 In this paper we consider how to make Constraint Programming (CP) solvers better at tackling soft-constraint problems. CP solvers typically tackle optimization problems using branch-and-bound, and although soft-constraint problems can easily be mapped into a CP optimization framework, a distinguishing feature is that we expect most soft constraints to hold, at least on typical problems. CP solvers rely heavily on propagation to cut down the search space, but soft constraints have little propagation ability (because even though the constraints are likely to be hold, we do not know for sure), and search takes over.

Hence, existing CP solvers are nearly always terrible at soft constraint problems, a deficiency made worse by the fact that typical search strategies are unaware of where the good solutions lie, such that in some cases, thousands of solutions must be enumerated before the solver gets close to proving optimality. Indeed problems which are good for CP are almost always better with Mixed Integer Programming (MIP) once we soften the constraints. Here, we consider a different approach, which is to lift the unsatisfiable-core solving approaches from MAXSAT and integrate them into a CP solver.

We give a brief description of propagation-based solving and LCG, for more details see [12]. We consider problems consisting of constraints C over integer variables x1, …, xn, each with a given finite domain Dorig(xi). A feasible solution is a valuation θ to the variables, which satisfies all constraints C, and lies in the domain Dorig=Dorig(x1)×…×D% orig(xn), i.e. θ(xi)∈Dorig(xi).

A propagation solver keeps a domain restriction D(xi)⊆Dorig(xi) for each variable and considers only solutions that lie within D=D(x1)×…×D(xn). Solving interleaves propagation, which repeatedly applies propagators to remove unsupported values, and search which splits the domain of some variable and considers the resulting sub-problems. This continues until all variables are fixed (success) or failure is detected (backtrack and try another subproblem).

Lazy clause generation is implemented by introducing Boolean variables for each potential value of a CP variable, named , and for each bound, . Negating them gives and . Fixing such a literal modifies D(xi) to make the corresponding fact true, and vice versa. Hence the literals give an alternate Boolean representation of the domain, which supports reasoning. Lazy clause generation makes use of clauses to record nogoods, where a clause is a disjunction of (or essentially just a set of) literals.

In a lazy clause generation solver, the actions of propagators (and search) to change domains are recorded in an implication graph over the literals. Whenever a propagator changes a domain it must explain how the change occurred in terms of literals, that is, each literal l that is made true must be explained by a clause L→l where L is a conjunction of literals. When the propagator detects failure it must explain the failure as a nogood, L→false, with L a conjunction of literals which cannot hold simultaneously. Then L is used for conflict analysis [11] to generate a nogood that explains the failure.

Before discussing how we integrate MAXSAT solving methods into CP, we illustrate the original MAXSAT algorithms by means of a simple clausal example.

Then {C1,C2,C4} is an unsatisfiable core, because x1=x2=true violates C4. Similarly {C1,C3,C5} is an unsatisfiable core, because x1=x3=true violates C5. As a Boolean Satisfiability (SAT) problem this is infeasible. As a Maximum Satisfiability (MAXSAT) problem, we can allow some soft constraint(s) to be violated. For example if we relax C2 and C3 we find a solution x1=true, x2=x3=false, with 2 violated constraints. Or if we relax C1 we find a better solution x1=false, x2=x3=true, which has only one constraint violated. ∎

For MAXSAT we minimize z=∑nj=1violated(Cj) where n is the number of clauses and violated(Cj)= 0 if Cj holds or 1 if Cj is violated. A generalization is weighted partial MAXSAT where z=∑nj=1wjviolated(Cj) given wj a weight attached to each soft clause Cj, and hard clauses encoded by wj=∞.

The weakness of branch and bound for soft-constraint problems is that soft constraints do not propagate, so we need to set violator variables false before the solver learns anything. In contrast branch-and-bound is very good for infeasible problems since it detects infeasibility in the first solve.

Fu and Malik [6] proposed the Msu1 algorithm for MAXSAT solving, later generalized by Ansótegui et al. [1] to Wpm1 for the weighted case. These algorithms iterate through a series of infeasible SAT problems until feasibility is reached. When the SAT solver fails, it returns an unsatisfiable core as a set of clauses that cannot hold simultaneously. Soft clauses in the set are relaxed using a fresh set of violator variables which are constrained so that at most one is true (atmost1 constraint), and solving continues. The first solution found is guaranteed to minimize the number of, or sum of weights of, violated clauses.

Wpm1 or equivalently Msu1 is defined in Algorithm 2. Solving the MAXSAT problem as SAT with soft clauses considered hard, we find either a solution or an unsatisfiable core. In the latter case, we create a new MAXSAT problem by encoding into it an allowance that we will not charge the first wmin units of the penalty for violating the clauses in the unsatisfiable core. If multiple clauses of the core are violated or if violated clause(s) have weight greater than wmin then the remaining violation will be charged as usual. The amount of penalty waived, accumulates in zmin. Eventually the MAXSAT problem is solved with cost 0 (i.e. all soft clauses are satisfied), then zmin is the optimal solution cost.

Note the similarity of Wpm1 with destructive lower bound search where we set the objective z=0, solve, if that fails increase it by one, re-solve and repeat; the first solution found is optimal. Wpm1 does better by restricting where the violation is allowed to occur for z=1 and at each further stage in the search.

To the problem of Example 1 we now add an extra variable x4 and the extra clauses C6≡x4 and C7≡¬x3∨¬x4. The first unsatisfiable core is {C1,C3,C5}. Rewriting these clauses with violator variables v1, v3, v5 gives

Then solving fails by deriving the empty clause as shown in Figure 1. The leaves of this tree show that the next core is {C1,C2,C3,C4,C6,C7}. Relaxing the problem again (including C1 and C3 that had already been relaxed) gives

This has a solution with x1=x2=true, x3=false, x4=true, which violates original clauses C3 and C4, and is optimal with cost 2. ∎ Figure 1: Example proof trace

The difficulty with Wpm1 is that it is extremely aggressive, in the sense that the only soft-constraint violations allowed are those which are already known to exist. On many problems the aggressive approach pays off, but on other problems either too many unsatisfiable cores need to be enumerated before achieving feasibility, or else the problems get more and more difficult to prove infeasible (the increasing number of atmost1 constraints leads to an exponential number of relaxation-variable assignments, some of which may be symmetric).

Marques-Silva & Planes [10] proposed Msu3 for solving problems which Wpm1 does not handle efficiently for the above reasons. Msu3 is defined in Algorithm 3. It is a hybrid unsatisfiable-core and branch-and-bound approach, which leverages some of the benefits of unsatisfiable-core solving, without being so aggressive. All soft constraints are considered hard initially, but each time an unsatisfiable core is found, all constraints in the set revert to soft, then the ordinary branch-and-bound process continues, to minimize their violations.

Msu3 resembles binary search, we probe an initially overconstrained problem, if that fails we relax it, otherwise we constrain to find a better solution.

To make use of soft global constraints that return a number of violations, we can simply use literals encoding the integer violation count. For example the constraint soft_alldifferent([x1,…,xn],z) enforces that z is a violation count, e.g. the number of pairs xi=xj,1≤i<j≤n. The usual LCG encoding of z creates bounds variables , , etc. We can make an indicator clause from each of these literals with weights equal to the marginal cost of each soft_alldifferent violation, and hence map to a weighted soft clause problem.

To illustrate the potential usefulness of unsatisfiable core based optimization for CP, we consider a soft constraint variant of the Resource Constrained Project Scheduling Problems (RCPSP). Rather than minimize makespan, we constrain the makespan to be some percentage of the optimal makespan, and soften all the precedences. These problems are similar to RCPSP where the aim is to minimize the number of tardy jobs (that finish after their specified due date).

To create instances we take each RCPSP/max [2] instance Mi from the sets ubo20, sm_j30, ubo50 in PSPLib [7], which are systematically generated by ProGen/max [13], and a proven lower bound li on its minimum makespan, usually the optimal makespan. We constrain all tasks in Mi to complete before time αli for each α∈{.7,.8,.9}. We maximize the number, or in a second experiment, the sum of randomly chosen weights 1..10, of precedences that hold.

We aim to show that Wpm1 and Msu3 can be advantageous over branch-and-bound, hence we run an LCG solver with all three methods. A secondary aim is to show that LCG-based unsatisfiable core approaches can be superior to other solving technologies, so we provide best known decompositions to pseudo-Boolean (PB), MAXSAT and MIP, and evaluate them on (i) SAT-based PB solver MiniSAT+ 19/11/2012 [4], (ii) unsatisfiability-based MAXSAT solver MSUnCore 6/6/2011 [10], and (iii) MIP solvers CPLEX 12.4 and SCIP 3.0.1 .

For our own solver we used CPX, a state-of-the-art LCG solver, but modified to implement the Wpm1 and Msu3 algorithms. CPX and SCIP both use learning and a built-in cumulative propagator. In these tests CPX uses activity-based search with phase saving and geometric restarts; the other solvers use their default searches which are similar, at least for the SAT-based solvers.

We use a cluster of Dell PowerEdge 1950 with 2 × 2.0 GHz Intel Quad Core Xeon E5405, 2×6MB Cache, 16 GB RAM, 600s timeouts, and 1GB memory limit per core. Data files are available from http://www.csse.unimelb.edu.au/~pjs/unsat_core. We disregard infeasible instances, where branch-and-bound will always be superior; almost all soft-constraint problems of interest are feasible. We also disregard instances for which all solvers timed out.

As the problems become larger, the huge numbers of variables created by the decompositions begin to overwhelm the SAT/MIP solvers, demonstrating the importance of using an LCG solving approach in addition to the unsatisfiability-based algorithms Wpm1 and Msu3 already available in the MSUnCore solver.

Specialized solvers [3, 8] have been highly successful for soft-constraint CSPs in extensional form. These approaches are similar to Wpm1 as they both effectively shift part of the cost function as inconsistencies are detected. But many problems (such as the scheduling problem we investigate) are not feasible to encode using extensional constraints only. We are unaware of any other approaches to soft intensionally defined constraint problems beyond branch-and-bound, apart from PBO/WBO [4, 9] which support intensionally-defined linear constraints only.