The cycleGAN is becoming an influential method in medical image synthesis. However, due to a lack of direct constraints between input and synthetic images, the cycleGAN cannot guarantee structural consistency between these two images, and such consistency is of extreme importance in medical imaging. To overcome this, we propose a structure-constrained cycleGAN for brain MR-to-CT synthesis using unpaired data that defines an extra structure-consistency loss based on the modality independent neighborhood descriptor to constrain structural consistency. Additionally, we use a position-based selection strategy for selecting training images instead of a completely random selection scheme. Experimental results on synthesizing CT images from brain MR images demonstrate that our method is better than the conventional cycleGAN and approximates the cycleGAN trained with paired data. 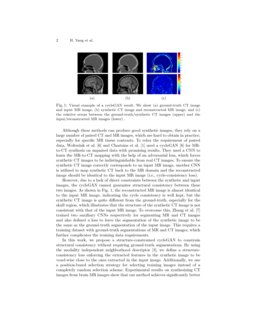 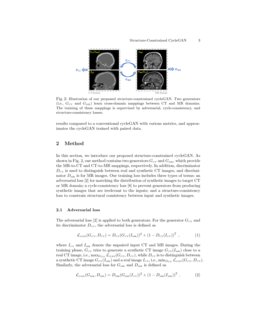 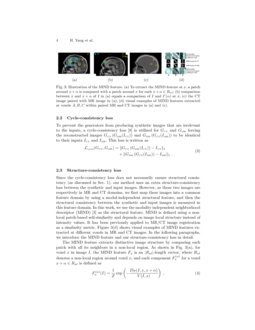 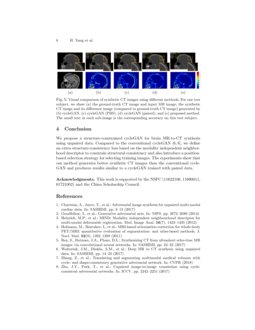 Magnetic resonance (MR) imaging has been widely utilized to diagnose patients, as it is non-ionizing, non-invasive, and has a range of contrast mechanisms. However, MR images do not directly provide electron density information, which is essential for some applications such as MR-based radiotherapy treatment planning or attenuation correction in hybrid PET/MR scanners. A straightforward solution is to separately scan a computed tomography (CT) image, but this is time-consuming, costly, potentially harmful to patients, and requires accurate MR/CT registrations. Therefore, to avoid the CT scan, a variety of approaches have been proposed to synthesize CT images from available MR images [1, 4, 5, 6, 7]. For example, by using paired MR and CT atlases, atlas-based methods [4] first register multiple atlas MR images to a subject MR image, and then the warped atlas CT images are combined to synthesize a subject CT image. Deep learning-based methods [5]

Although these methods can produce good synthetic images, they rely on a large number of paired CT and MR images, which are hard to obtain in practice, especially for specific MR tissue contrasts. To relax the requirement of paired data, Wolterink et al. [6] and Chartsias et al. [1] used a cycleGAN [8] for MR-to-CT synthesis on unpaired data with promising results. They used a CNN to learn the MR-to-CT mapping with the help of an adversarial loss, which forces synthetic CT images to be indistinguishable from real CT images. To ensure the synthetic CT image correctly corresponds to an input MR image, another CNN is utilized to map synthetic CT back to the MR domain and the reconstructed image should be identical to the input MR image (i.e., cycle-consistency loss).

However, due to a lack of direct constraints between the synthetic and input images, the cycleGAN cannot guarantee structural consistency between these two images. As shown in Fig. 1, the reconstructed MR image is almost identical to the input MR image, indicating the cycle consistency is well kept, but the synthetic CT image is quite different from the ground-truth, especially for the skull region, which illustrates that the structure of the synthetic CT image is not consistent with that of the input MR image. To overcome this, Zhang et al. [7] trained two auxiliary CNNs respectively for segmenting MR and CT images and also defined a loss to force the segmentation of the synthetic image to be the same as the ground-truth segmentation of the input image. This requires a training dataset with ground-truth segmentations of MR and CT images, which further complicates the training data requirements.

In this work, we propose a structure-constrained cycleGAN to constrain structural consistency without requiring ground-truth segmentations. By using the modality independent neighborhood descriptor [3], we define a structure-consistency loss enforcing the extracted features in the synthetic image to be voxel-wise close to the ones extracted in the input image. Additionally, we use a position-based selection strategy for selecting training images instead of a completely random selection scheme. Experimental results on synthesizing CT images from brain MR images show that our method achieves significantly better results compared to a conventional cycleGAN with various metrics, and approximates the cycleGAN trained with paired data.

In this section, we introduce our proposed structure-constrained cycleGAN. As shown in Fig. 2, our method contains two generators G\tiny{CT} and G\tiny{MR}, which provide the MR-to-CT and CT-to-MR mappings, respectively. In addition, discriminator D\tiny{CT} is used to distinguish between real and synthetic CT images, and discriminator D\tiny{MR} is for MR images. Our training loss includes three types of terms: an adversarial loss [2] for matching the distribution of synthetic images to target CT or MR domain; a cycle-consistency loss [8] to prevent generators from producing synthetic images that are irrelevant to the inputs; and a structure-consistency loss to constrain structural consistency between input and synthetic images.

Since the cycle-consistency loss does not necessarily ensure structural consistency (as discussed in Sec. 1), our method uses an extra structure-consistency loss between the synthetic and input images. However, as these two images are respectively in MR and CT domains, we first map these images into a common feature domain by using a modal-independent structural feature, and then the structural consistency between the synthetic and input images is measured in this feature domain. In this work, we use the modality independent neighborhood descriptor (MIND) [3] as the structural feature. MIND is defined using a non-local patch-based self-similarity and depends on image local structure instead of intensity values. It has been previously applied to MR/CT image registration as a similarity metric. Figure 3(d) shows visual examples of MIND features extracted at different voxels in MR and CT images. In the following paragraphs, we introduce the MIND feature and our structure-consistency loss in detail.

The MIND feature extracts distinctive image structure by comparing each patch with all its neighbors in a non-local region. As shown in Fig. 3(a), for voxel x in image I, the MIND feature Fx is an |Rnl|

Rnl denotes a non-local region around voxel x, and each component F(α)x for a voxel x+α∈Rnl is defined as

where Z is a normalization constant so that the maximal component of Fx is 1. DP(I,x,x+α) denotes the L2 distance between two image patches P respectively centered at voxel x and voxel x+α in image I, and V(I,x)

is an estimation of local variance at voxel

x, which can be written as

where N is the 4-neighborhood of voxel x.

It is difficult to directly compute the operation DP and its gradient using Eqn. 5 in a deep network. Instead, as shown in Fig. 3(b), DP can be equivalently computed by using a convolutional operation as

where C is an all-one kernel of the same size as patch P, and I′(α) denotes I translated by α. By doing this, the structural feature can be extracted via several simple operations and the gradients of these operations can be easily computed.

Based on the MIND feature introduced above, the structure-consistency loss in our method is defined to enforce the extracted MIND features in the synthetic images G\tiny{CT}(I\tiny{MR}) or G\tiny{MR}(I\tiny{CT}) to be voxel-wise close to the ones extracted in their inputs I\tiny{MR} or I\tiny{CT}, which can be written as

where N\tiny{MR} and N\tiny{CT} respectively denote the number of voxels in input images I\tiny{MR} and I\tiny{CT}, and ∥⋅∥1 is the L1 norm. In this work, we use a 9×9 non-local region and a 7×7 patch for computing structure-consistency loss. Furthermore, instead of an all-one kernel C, we utilize a Gaussian kernel Cσ

σ=2 to reweight the importance of voxels within patch P in Eqn. 7. In preliminary experiments, we tried different non-local regions, patch sizes, and σ values, but did not observe improved performance.

Given the definitions of adversarial, cycle-consistency, and structure-consistency losses above, the training loss of our proposed method is defined as:

, are 2D FCNs consisting of five convolutional layers to classify whether

70×70 overlapping image patches are real or synthetic. For further details, please refer to [8].

Although our input MR and CT slices are unpaired, we can get the positions of their slices within the volumes. Slices in the middle of the volume necessarily have more brain tissue than peripheral slices. Thus, instead of feeding in slices at extremely different positions of the brain, e.g., a peripheral CT slice and a medial MR slice, we input training slices at similar positions; this is referred to as a position-based selection (PBS) strategy. That is, the MR and CT slices are linearly aligned considering their respective numbers of slices within the volumes, and given the i-th MR slice in its volume, the index T(i) of corresponding CT slice selected by our method is determined by

where K\tiny{MR} and K\tiny{CT} respectively denote the number of slices in unpaired MR and CT volumes. [⋅] denotes the rounding function, and m is a random integer within the range of [−5,5]. This strategy forces the discriminators to be stronger at distinguishing synthetic images from real ones, thus avoiding mode collapse. This in turn forces our generators to be better in order to trick our discriminators. We evaluate this position-based selection strategy in Sec. 3.

, the experiments were performed on 2D sagittal image slices. Each MR or CT volume contains about 270 sagittal images, which are resized and padded to

To quantitatively compare these methods, we use mean absolute error (MAE), peak signal-to-noise ratio (PSNR), and structural similarity (SSIM) between the ground-truth CT volume and the synthetic one, which are computed within the head region mask and averaged over 15 test subjects. Furthermore, SSIM over regions with high gradient magnitudes (denoted as “SSIM(HG)”) is also computed to measure the quality of bone regions in synthetic images. The maximum value in PSNR and the dynamic range in SSIM are set to 4500, as the range of our CT data is [−1000,3500] HU.

As shown in Fig. 4, our proposed method achieves significantly better performance than conventional cycleGAN in all the metrics (p<0.001) and produces similar results compared to the cycleGAN trained with paired data. Compared to randomly selecting training slices at any position, our proposed position-based selection strategy produces significantly higher SSIM(HG) score (p<0.001) with marginal improvement in the other three metrics. Figure 5 shows visual examples of synthetic CT images by different methods from a test subject.

We propose a structure-constrained cycleGAN for brain MR-to-CT synthesis using unpaired data. Compared to the conventional cycleGAN [8, 6], we define an extra structure-consistency loss based on the modality independent neighborhood descriptor to constrain structural consistency and also introduce a position-based selection strategy for selecting training images. The experiments show that our method generates better synthetic CT images than the conventional cycleGAN and produces results similar to a cycleGAN trained with paired data.