Unpacking the Drop in COVID-19 Case Fatality Rates: A Study of National and Florida Line-Level Data

Since the COVID-19 pandemic first reached the United States, the case fatality rate has fallen precipitously. Several possible explanations have been floated, including greater detection of mild cases due to expanded testing, shifts in age distribution among the infected, lags between confirmed cases and reported deaths, improvements in treatment, mutations in the virus, and decreased viral load as a result of mask-wearing. Using both Florida line-level data and recently released (but incomplete) national line level data from April 1, 2020 to November 1, 2020 on cases, hospitalizations, and deaths–each stratified by age–we unpack the drop in case fatality rate (CFR). Under the hypothesis that improvements in treatment efficacy should correspond to decreases in hospitalization fatality rate (HFR), we find that improvements in the national data do not always match the story told by Florida data. In the national data, treatment improvements between the first wave and the second wave appear substantial, but modest when compared to the drop in aggregate CFR. By contrast, possibly due to constrained resources in a much larger second peak, Florida data suggests comparatively little difference between the first and second wave, with HFR slightly increasing in every age group. However, by November 1st, both Florida and national data suggest significant decreases in age-stratified HFR since April 1st. By accounting for several confounding factors, our analysis shows how age-stratified HFR can provide a more realistic picture of treatment improvements than CFR. One key limitation of our analysis is that the national line-level data remains incomplete and plagued by artifacts. Our analysis highlights the crucial role that this data can play but also the pressing need for public, complete, and high-quality age-stratified line-level data for both cases, hospitalizations, and deaths for all states. 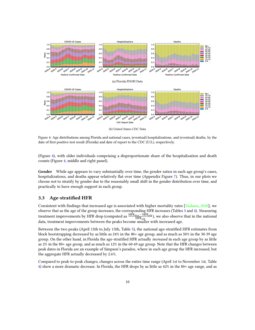 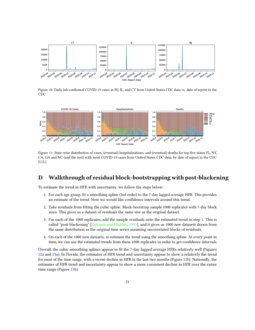 Place of Occurrence of COVID-19 Deaths in the UK: Modelling and Analysis

Background: One of the most challenging keys to understand COVID-19 evol...
Ezequiel Alvarez, et al. ∙

The Great Equalizer: Medicare and the Geography of Consumer Financial Strain

Temporal Events Detector for Pregnancy Care (TED-PC): A Rule-based Algorithm to Infer Gestational Age and Delivery Date from Electronic Health Records of Pregnant Women with an