Given a target distribution μ on a general state space X and a proposal Markov jump process with generator Q, in this paper we study the scaling limit of two types of Metropolis-Hastings (MH) processes with generators M_1(Q,μ) and M_2(Q,μ) respectively. First, we motivate our study of M_2 by offering a geometric interpretation of M_1, M_2 and their convex combinations as L^1 minimizers between Q and the set of μ-reversible generators of Markov jump processes, extending the results by Billera and Diaconis '01. Specializing into the case of X = R^d along with a Gaussian proposal with vanishing variance and Gibbs target distribution, we prove that, upon appropriate scaling in time, the family of Markov jump processes corresponding to M_1, M_2 or their convex combinations all converge weakly to an universal Langevin diffusion. 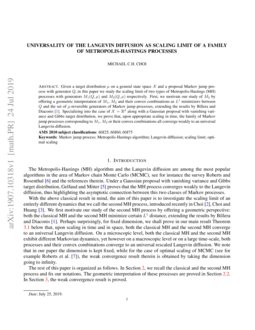 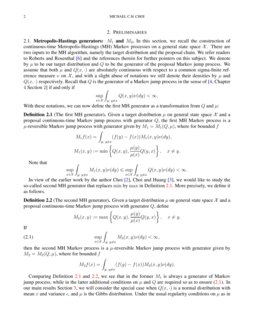 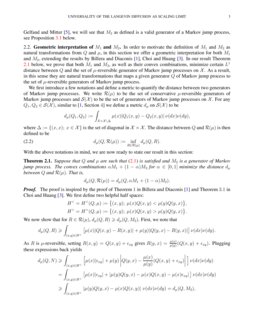 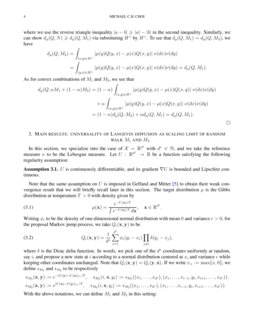 Universality of the Langevin diffusion as scaling limit of a family of Metropolis-Hastings processes I: fixed dimension

Markov substitute processes : a new model for linguistics and beyond

The Metropolis-Hastings (MH) algorithm and the Langevin diffusion are among the most popular algorithms in the area of Markov chain Monte Carlo (MCMC), see for instance the survey

Roberts and Rosenthal [6] and the references therein. Under a Gaussian proposal with vanishing variance and Gibbs target distribution, Gelfand and Mitter [5] proves that the MH process converges weakly to the Langevin diffusion, thus highlighting the asymptotic connection between this two classes of Markov processes.

With the above classical result in mind, the aim of this paper is to investigate the scaling limit of an entirely different dynamics that we call the second MH process, introduced recently in Choi [2], Choi and Huang [3]. We first motivate our study of the second MH process by offering a geometric perspective: both the classical MH and the second MH minimize certain L1 distance, extending the results by Billera and Diaconis [1]. Perhaps surprisingly, for fixed dimension, we shall prove in our main result Theorem 3.1 below that, upon scaling in time and in space, both the classical MH and the second MH converge to an universal Langevin diffusion. On a microscopic level, both the classical MH and the second MH exhibit different Markovian dynamics, yet however on a macroscopic level or on a large time-scale, both processes and their convex combinations converge to an universal rescaled Langevin diffusion. We note that in our paper the dimension is kept fixed, while for the case of optimal scaling of MCMC (see for example Roberts et al. [7]), the weak convergence result therein is obtained by taking the dimension going to infinity.

The rest of this paper is organized as follows. In Section 2, we recall the classical and the second MH process and fix our notations. The geometric interpretation of these processes are proved in Section 2.2. In Section 3, the weak convergence result is proved.

In this section, we recall the construction of continuous-time Metropolis-Hastings (MH) Markov processes on a general state space X. There are two inputs to the MH algorithm, namely the target distribution and the proposal chain. We refer readers to Roberts and Rosenthal [6] and the references therein for further pointers on this subject. We denote by μ to be our target distribution and Q to be the generator of the proposal Markov jump process. We assume that both μ and Q(x,⋅) are absolutely continuous with respect to a common sigma-finite reference measure ν on X, and with a slight abuse of notations we still denote their densities by μ and Q(x,⋅) respectively. Recall that Q is the generator of a Markov jump process in the sense of [4, Chapter 4 Section 2] if and only if

With these notations, we can now define the first MH generator as a transformation from Q and μ:

In view of the earlier work by the author Choi [2], Choi and Huang [3], we would like to study the so-called second MH generator that replaces min by max in Definition 2.1. More precisely, we define it as follows.

then the second MH Markov process is a μ-reversible Markov jump process with generator given by M2=M2(Q,μ), where for bounded f

Comparing Definition 2.1 and 2.2, we see that in the former M1 is always a generator of Markov jump process, while in the latter additional conditions on μ and Q are required so as to ensure (2.1). In our main results Section 3, we will consider the special case when Q(x,⋅)

is a normal distribution with mean

x and variance ϵ, and μ is the Gibbs distribution. Under the usual regularity conditions on μ as in Gelfand and Mitter [5], we will see that M2 as defined is a valid generator of a Markov jump process, see Proposition 3.1 below.

2.2. Geometric interpretation of M1 and M2

In order to motivate the definition of M1 and M2 as natural transformations from Q and μ, in this section we offer a geometric interpretation for both M1 and M2, extending the results by Billera and Diaconis [1], Choi and Huang [3]. In our result Theorem 2.1 below, we prove that both M1 and M2, as well as their convex combinations, minimize certain L1 distance between Q and the set of μ-reversible generator of Markov jump processes on X. As a result, in this sense they are natural transformations that maps a given generator Q of Markov jump process to the set of μ-reversible generators of Markov jump process.

With the above notations in mind, we are now ready to state our result in this section:

Suppose that Q and μ are such that (2.1) is satisfied and M2 is a generator of Markov jump process. The convex combinations αM1+(1−α)M2 for α∈[0,1] minimize the distance dμ between Q and R(μ). That is,

[Proof. ]The proof is inspired by the proof of Theorem 1 in Billera and Diaconis [1] and Theorem 3.1 in Choi and Huang [3]. We first define two helpful half spaces:

where we use the reverse triangle inequality |a−b|⩾|a|−|b| in the second inequality. Similarly, we can show dμ(Q,N)⩾dμ(Q,M1) via substituting H< by H>. To see that dμ(Q,M1)=dμ(Q,M2), we have

As for convex combinations of M1 and M2, we see that

In this section, we specialize into the case of X=Rd∗ with d∗∈N, and we take the reference measure ν to be the Lebesgue measure. Let U:Rd∗→R be a function satisfying the following regularity assumption:

U is continuously differentiable, and its gradient ∇U is bounded and Lipschitz continuous.

Note that the same assumption on U is imposed in Gelfand and Mitter [5] to obtain their weak convergence result that we will briefly recall later in this section. The target distribution μ is the Gibbs distribution at temperature T>0 with density given by

Writing ϕϵ to be the density of one-dimensional normal distribution with mean 0 and variance ϵ>0, for the proposal Markov jump process, we take Qϵ(x,y) to be

where δ is the Dirac delta function. In words, we pick one of the d∗ coordinates uniformly at random, say i, and propose a new state at i according to a normal distribution centered at xi and variance ϵ while keeping other coordinates unchanged. Note that Qϵ(x,y)=Qϵ(y,x). If we write x+:=max{x,0}, we define sM1 and sM2 to be respectively

With the above notations, we can define M1 and M2 in this setting:

Suppose that U satisfies Assumption 3.1, μ is the Gibbs distribution (3.1) and Qϵ is the Gaussian proposal (3.2). Then both Mϵ1=M1(Qϵ,μ) and Mϵ2=M2(Qϵ,μ) are generators of Markov jump process. Furthermore, for x≠y,

Next, we show that Mϵ2 is a valid generator of Markov jump process. Let M be an upper bound on

for all 1⩽i⩽d∗. By mean value theorem on U, we have

to be a normal random variable with mean

0 and variance ϵ, this leads to

is the moment generating function of the half-normal distribution

|Z|, which is independent of x.

In our main result of this paper, we are primarily interested in the scaling limit of XMϵ1 and XMϵ2 upon scaling in time as ϵ→0. The scaling in space is embedded in the proposal Qϵ. Let Dd∗[0,∞) be the space of Rd∗-valued functions on [0,∞) that are right continuous with left limit, equipped with the Skorohod topology. We denote the weak convergence of processes in the Skorohod topology by ⇒.

Theorem 3.1 (Universality of the Langevin diffusion as scaling limit of Mϵ1 and Mϵ2).

Suppose that U satisfies Assumption 3.1, and we let XMϵ1=(XMϵ1(t))t⩾0 and XMϵ2=(XMϵ2(t))t⩾0 to be the Markov jump process with generator Mϵ1 and Mϵ2 respectively, both with initial distribution XMϵ1(t)=XMϵ2(t)=X0 independent of ϵ. Let X=(X(t))t⩾0 be the following time-rescaled Langevin diffusion with X(0)=X0 and stochastic differential equation given by

where (W(t))t⩾0 is the standard d∗-dimensional Brownian motion. Then we have

The weak convergence of XMϵ1 is first proved by Gelfand and Mitter [5]. We shall only prove the case of XMϵ2 in Section 4.1.

It is perhaps surprising that both Mϵ1 and Mϵ2 share the same scaling limit, given that they have entirely different dynamics. In fact, any Markov jump process whose generator is a convex combination of Mϵ1 and Mϵ2 converges to the same Langevin diffusion:

Suppose that U satisfies Assumption 3.1, and we let Yϵ=(Yϵ(t))t⩾0 be the Markov jump process with generator αMϵ1+(1−α)Mϵ2, α∈[0,1] and initial distribution Yϵ(t)=X0 independent of ϵ. Let X=(X(t))t⩾0 be the following time-rescaled Langevin diffusion with X(0)=X0 and stochastic differential equation given by

where (W(t))t⩾0 is the standard d∗-dimensional Brownian motion. Then we have

In view of Theorem 2.1 and Corollary 3.1, we see that on one hand the convex combination of αMϵ1+(1−α)Mϵ2 may have different dynamics for different α, yet interestingly they all minimize the distance dμ and converge weakly to the same Langevin diffusion.

The rest of the paper is devoted to the proof of Theorem 3.1 and Corollary 3.1 in Section 4.1 and 4.2 respectively.

Note that since the drift ∇U is Lipschitz continuous, by [4, Chapter 8 Theorem 2.5], the space of infinitely differentiable functions with compact support C∞c(Rd∗) forms a core of G. Thus to prove the desired weak convergence, by [4, Chapter 1 Theorem 6.1] it suffices to prove the uniform convergence of the generator in C∞c(Rd∗), that is, for f∈C∞c(Rd∗) as ϵ→0 we would like to prove that

We now present three lemmas that will aid our proof, and their proofs are deferred to Section 4.1.1, 4.1.2 and 4.1.3 respectively. The first auxiliary lemma bounds the distance between sM2 and ^sM2:

Our next lemma controls the upper bound on Lemma 4.1.

, we prove the following estimates on the drift and volatility terms of

where the convergence are all uniform in x∈Rd∗.

We proceed to complete the proof of Theorem 3.1. By Taylor expansion on f∈C∞c(Rd∗), there exists z=αx+(1−α)y such that

where the fourth equality follows from Lemma 4.3 and the fact that f has compact support. Note that the convergence is uniform in x.

First, by the Taylor expansion on U and the fact that U is Lipschitz continuous by Assumption 3.1, there exists constant c1 such that

We would like to show the following inequality holds, by considering the possible signs of U(x)−U(y) and ⟨∇U(x),x−y⟩:

Similarly, we would like to show the following inequality holds, by considering the possible signs of U(x)−U(y) and ⟨∇U(x),x−y⟩:

where the inequalities in the two equations above follow from mean value theorem and the fact that ∇U is bounded by Assumption 3.1.

to be the cumulative distribution function of standard normal. We also denote

ϕ(i)ϵ to be the i-th derivative of ϕϵ. By brute force differentiation and integration we note that