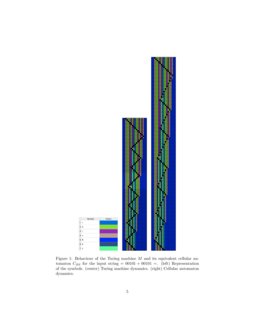 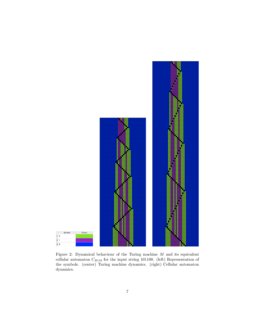 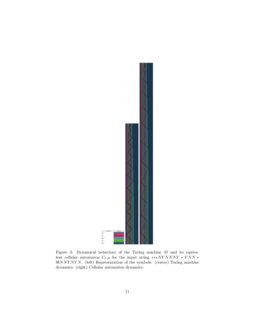 Frequently the construction of computers in cellular automata are handled just with primitive signals (classic examples include von Neumann rule [27], Codd [3], Banks [2]) or with non-trivial patterns known as gliders, particles, waves or self-localizations (classic examples include the Game of Life [6], Rule 110 [4, 30]), and recently by packages of signals ([18, 10]). Actually, we have some Turing machines implemented in cellular automata, one of them in the Game of Life by Paul Rendell [23] and in one dimension by Smith [25] and other by Lindgren and Nordahl [9].

A Turing machine is defined as a 7-tuple M=(Q,Σ,Γ,δ, q0,B,F), where Q is the finite set of states, Σ the alphabet of input symbols, Γ is the complete set of symbols in the tape, δ the transition function, q0 the start state, B the blank symbol and F the set of final or accepting states. The transition function determines relations between a state with a symbol to other state, as follows: δ(q,X)→(p,Y,D) ∀ q,p∈Q and X,Y∈Γ, and a direction D (left or right). This way, the language that a Turing machine can recognize is defined as L(M)={w|q0w⊢∗I∀ I∈F}, where w is a string of L and ⊢ denotes a move of a Turing machine [8, 16].

One-dimensional cellular automata is represented by an array of cells xi where i∈Z and each x takes a value from a finite alphabet Σ. Thus, a sequence of cells {xi} of finite length n describes a string or global configuration c on Σ. The set of finite configurations will be expressed as Σn. An evolution is comprised by a sequence of configurations {ci} produced by the mapping Φ:Σn→Σn; thus the global relation is symbolized as: Φ(ct)→ct+1, where t represents time and every global state of c is defined by a sequence of cell states. The global relation is determined over the cell states in configuration ct updated at the next configuration ct+1 simultaneously by a local function φ as follows: φ(xti−r,…,xti,…,xti+r)→xt+1i. Wolfram represents one-dimensional cellular automata with two parameters (k,r), where k=|Σ| is the number of states, and r is the neighbourhood radius. In this domain, we have that Σn determines the number of neighbourhoods of size n=2r+1, and kkn represents the number of distinct evolution rules [28, 14].

3 Converting a Turing machine to a one-dimensional cellular automaton

In 1971 [25], Alvy Smith III proved that a Turing machine of m internal states and n tape symbols in 2-linear time can be simulated by a one-dimensional cellular automaton with a neighbourhood of radius r=1 and m+2n colours (cellular automata states). Later in 1990 [9], Lindgren and Nordahl pointed that not all m+2n colours is necessary to accomplish this and asserted that m+|{(state,direction)∣∃δ(p,X)=(state,X′,direction)}| colours are necessary. It is m plus the cardinality of the set of pairs (state,direction) such that it is possible for the machine to reach such state by moving in such direction. Nevertheless, this number of colours is not enough to do the simulation according to the idea shown by Smith, since there are needed at least 2 colours to represent the machine’s head when it moves to the left. This way, the smaller number of colours required to accomplish this particular simulation is m+n+|{state∣∃δ(p,X)=(state,X′,left)}| (m plus n plus the cardinality of the set of states that can be reached by moving to the left).

To an arbitrary Turing machine M=(Q,ΣM,Γ,δ,q0,B,F) there exists a one-dimensional equivalent cellular automaton C with an alphabet ΣC and radius r=1. So, it is constructed from [9], as following.

ΣC=ΣM∪Q∪Q′, where Q′ is a set of auxiliary symbols that will help to simulate the movements of the head to the left. So, the number of auxiliary symbols for the cellular automaton will be |Q′|≤|Q|. Note that ΣC is formed by the union of a set of tape symbols ΣM and a set of states Q. This is possible because they are both treaties just as sets of symbols and not as symbols and states separately.

The movements to the right δ(p,X)=(q,Y,right) for a cellular automaton is defined in the next way:

where n is a natural number on Zn and indicates every symbol on ΣC. That means that for every rule shown, there are defined |ΣC| rules on φ. By applying this rules, we get a behaviour like this,

where σ1,σ2∈ΣM. Finally, for the Turing machine’s transitions to the left, δ(p,X)=(q,Y,left), we define the following rules on φ.

q′∈Q′ is a new symbol and it is an auxiliary symbol which indicates that in the next time step the head of the machine will move to the left. To simulate this one, we need add the next rule.

By applying these rules, we get a behaviour like this (σ1,σ2∈ΣM):

By generalizing the sets of rules shown, we can build an algorithm such that, given a Turing machine M as input produces an equivalent cellular automaton C.

Note that the cycle at the end of the algorithm that takes O(n3) time, where n=|ΣC|. It is only used to indicate that every undefined combination of symbols will keep constant. By taking this for granted, the algorithm takes just O(m∗o) time where m=|Q| and o=|ΣM|.

Similarly, we say the string ω0 has been accepted by C if ωt=αfβ where f∈F, once C has ended the simulation at a time step t.

A classic example in computer science is the design of computable functions performing arithmetical operations. In this way, a Turing machine performing sum is our first case of study.

The behaviour of the Turing machine M for the input string =00101+00101=, is shown in Fig. 3(center). By using M as input for the algorithm described, we get a cellular automaton CBS, thich behaves almost as M. This is shown in Fig. 3(right). As we can see, the inputs and outputs of both M and CBS are the same, that means the simulation was done properly. However, the behaviour of both models is not exactly alike; CBS takes twice the time of M to move its head to the left. The set of rules defined for CBS is shown in Table 4.

The second case of study is the famous elementary cellular automaton Rule 110, for details see [13, 19].222Rule 110 repository. http://uncomp.uwe.ac.uk/genaro/Rule110.html This rule is computationally universal simulating a cyclic tag system with a complicated system of gliders and collisions, for details see [30, 20].333Cyclic tag system working in Rule 110. http://uncomp.uwe.ac.uk/genaro/rule110/ctsRule110.html

Let the Turing machine be M=(QM,ΣM,Γ,δ,q0,B) capable of simulating the behaviour of the elementary cellular automaton Rule 110. This machine is one of several proposed with the same capacities described in Cook’s paper [4]. This way, QM={Sx0,S01, S11,SB} is the set of states of the machine, ΣM={0,1} is the set of input symbols, Γ={0,1,B} is the complete set of tape symbols, δ is the transition function shown in Table 5, q0=a is the initial state of the machine and B is the blank symbol.

Following the algorithm, we have the whole set of rules defined for the cellular automaton CR110 to simulate M in Table 5.

We will note that in this system is not relevant a halt condition because the goal is yield the belong string. In a cellular space for Rule 110 starting with the string 1011, it yields the string 111111101 five generations later.

In our last case, we consider a special kind of Turing machines that are reversible in its table transitions. It is an universal reversible Turing machine able to simulate any cyclic tag system proposed by Morita and Yamaguchi with 17 states and five symbols. For details see [21].

As we did in the last two examples, we can observe that both, the behaviour of the Turing machine M (Fig. 3 center) and the behaviour of its equivalent cellular automaton CUR (Fig. 3 right) differ only in the amount of time required to process the movements of the head to the left. The set of rules defined for CUR is shown in Table 8.