This article concerns the expressive power of depth in neural nets with ReLU activations and bounded width. We are particularly interested in the following questions: what is the minimal width w_min(d) so that ReLU nets of width w_min(d) (and arbitrary depth) can approximate any continuous function on the unit cube [0,1]^d aribitrarily well? For ReLU nets near this minimal width, what can one say about the depth necessary to approximate a given function? We obtain an essentially complete answer to these questions for convex functions. Our approach is based on the observation that, due to the convexity of the ReLU activation, ReLU nets are particularly well-suited for representing convex functions. In particular, we prove that ReLU nets with width d+1 can approximate any continuous convex function of d variables arbitrarily well. Moreover, when approximating convex, piecewise affine functions by such nets, we obtain matching upper and lower bounds on the required depth, proving that our construction is essentially optimal. These results then give quantitative depth estimates for the rate of approximation of any continuous scalar function on the d-dimensional cube [0,1]^d by ReLU nets with width d+3. 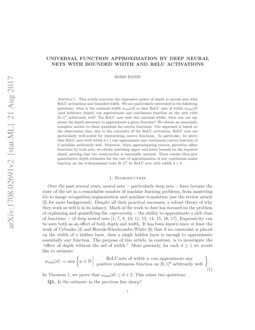 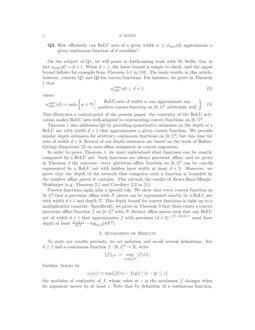 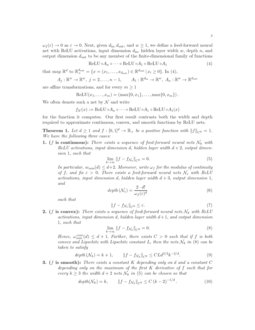 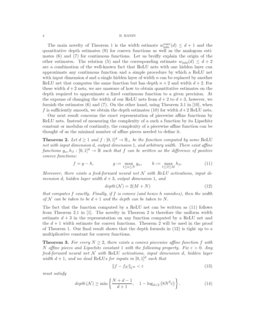 Deep Neural Networks for Estimation and Inference: Application to Causal Effects and Other Semiparametric Estimands

There has been a recent shift in sequence-to-sequence modeling from recu...
Joshua Hanson, et al. ∙

Over the past several years, neural nets − particularly deep nets −

have become the state of the art in a remarkable number of machine learning problems, from mastering Go to image recognition/segmentation and machine translation (see the review article

[2] for more background). Despite all their practical successes, a robust theory of why they work so well is in its infancy. Much of the work to date has focused on the problem of explaining and quantifying the expressivity − the ability to approximate a rich class of functions − of deep neural nets [1, 8, 9, 11, 12, 13, 15, 16, 17, 18]. Expressivity can be seen both as an effect of both depth and width. It has been known since at least the work of Cybenko [4] and Hornik-Stinchcombe-White [7] that if no constraint is placed on the width of a hidden layer, then a single hidden layer is enough to approximate essentially any function. The purpose of this article, in contrast, is to investigate the “effect of depth without the aid of width.” More precisely, for each d≥1 we would like to estimate

In Theorem 1, we prove that ωmin(d)≤d+2. This raises two questions:

On the subject of Q1, we will prove in forthcoming work with M. Sellke [6] that in fact ωmin(d)=d+1. When d=1, the lower bound is simple to check, and the upper bound follows for example from Theorem 3.1 in [11]. The main results in this article, however, concern Q1 and Q2 for convex functions. For instance, we prove in Theorem 1 that

This illustrates a central point of the present paper: the convexity of the ReLU activation makes ReLU nets well-adapted to representing convex functions on [0,1]d.

Theorem 1 also addresses Q2 by providing quantitative estimates on the depth of a ReLU net with width d+1 that approximates a given convex function. We provide similar depth estimates for arbitrary continuous functions on [0,1]d, but this time for nets of width d+3. Several of our depth estimates are based on the work of Balázs-György-Szepesvári [3] on max-affine estimators in convex regression.

In order to prove Theorem 1, we must understand what functions can be exactly computed by a ReLU net. Such functions are always piecewise affine, and we prove in Theorem 2 the converse: every piecewise affine function on [0,1]d can be exactly represented by a ReLU net with hidden layer width at most d+3. Moreover, we prove that the depth of the network that computes such a function is bounded by the number affine pieces it contains. This extends the results of Arora-Basu-Mianjy-Mukherjee (e.g. Theorem 2.1 and Corollary 2.2 in [1]).

Convex functions again play a special role. We show that every convex function on [0,1]d that is piecewise affine with N pieces can be represented exactly by a ReLU net with width d+1 and depth N.

To state our results precisely, we set notation and recall several definitions. For d≥1 and a continuous function f:[0,1]d→R, write

the modulus of continuity of f, whose value at ε is the maximum f changes when its argument moves by at most ε. Note that by definition of a continuous function, ωf(ε)→0 as ε→0. Next, given din,dout, and w≥1, we define a feed-forward neural net with ReLU activations, input dimension din, hidden layer width w, depth n, and output dimension dout to be any member of the finite-dimensional family of functions

are affine transformations, and for every m≥1

We often denote such a net by N and write

for the function it computes. Our first result contrasts both the width and depth required to approximate continuous, convex, and smooth functions by ReLU nets.

Hence, ωconvmin(d)≤d+1. Further, there exists C>0 such that if f is both convex and Lipschitz with Lipschitz constant L, then the nets Nk in (8) can be taken to satisfy

The main novelty of Theorem 1 is the width estimate wconvmin(d)≤d+1 and the quantitative depth estimates (9) for convex functions as well as the analogous estimates (6) and (7) for continuous functions. Let us breifly explain the origin of the other estimates. The relation (5) and the corresponding estimate wmin(d)≤d+2 are a combination of the well-known fact that ReLU nets with one hidden layer can approximate any continuous function and a simple procedure by which a ReLU net with input dimension d and a single hidden layer of width n can be replaced by another ReLU net that computes the same function but has depth n+2 and width d+2. For these width d+2 nets, we are unaware of how to obtain quantitative estimates on the depth required to approximate a fixed continuous function to a given precision. At the expense of changing the width of our ReLU nets from d+2 to d+3, however, we furnish the estimates (6) and (7). On the other hand, using Theorem 3.1 in [11], when f is sufficiently smooth, we obtain the depth estimates (10) for width d+2 ReLU nets.

Let d≥1 and f:[0,1]d→R+ be the function computed by some ReLU net with input dimension d, output dimension 1, and arbitrary width. There exist affine functions gα,hβ:[0,1]d→R such that f can be written as the difference of positive convex functions:

This article is related to several strands of prior work:

It is a pleasure to thank Elchanan Mossel and Leonid Hanin for many helpful discussions. This paper originated while I attended EM’s class on deep learning

[10]. In particular, I would like to thank him for suggesting proving quantitative bounds in Theorem 2 and for suggesting that a lower bound can be obtained by taking piece-wise linear functions with many different directions. He also pointed out that the width estimates for continuous function in Theorem 1 where sub-optimal in a previous draft. l would also like to thank Leonid Hanin for detailed comments on a several previous drafts and for useful references to results in approximation theory. I am also grateful to Brandon Rule and Matus Telgarsky for comments on an earlier version of this article. I am also grateful to BR for the original suggestion to investigate the expressivity of neural nets of width 2. I also would like to thank Max Kleiman-Weiner for useful comments and discussion. Finally, I thank Zhou Lu for pointing out a serious error what used to be Theorem 3 in a previous version of this article. I have removed that result.

We first treat the case

when f is convex. We seek to show that f can be exactly represented by a ReLU net with input dimension d, hidden layer width d+1, and depth N. Our proof relies on the following observation.

Fix d≥1, let T:Rd+→R be an arbitrary function, and L:Rd→R be affine. Define an invertible affine transformation A:Rd+1→Rd+1 by

Then the image of the graph of T under

st standard basis vector so that

where (id,0)(x)=(x,0) maps [0,1]d to the graph of the zero function. Note that the ReLU in this initial layer is linear. With this notation, repeatedly using Lemma 3, we find that

Next, consider the general case when f is given by

as in (11). For this situation, we use a different way of computing the maximum using ReLU nets.

There exists a ReLU net M with input dimension 2, hidden layer width 2, output dimension 1 and depth 2 such that

We now describe how to construct a ReLU net N with input dimension d, hidden layer width d+3, output dimension 1, and depth 2(M+N) that exactly computes f. We use width d to copy the input x, width 2 to compute successive maximums of the positive affine functions gα,hβ using the net M from Lemma 4 above, and width 1 as memory in which we store g=supαgα while computing h=supβhβ. The final layer computes the difference f=g−h. ∎

We begin by showing (8) and (9). Suppose f:[0,1]d→R+ is convex and fix ε>0. A simple discretization argument shows that there exists a piecewise affine convex function g:[0,1]d→R+ such that ∥f−g∥C0≤ε. By Theorem 2, g can be a exactly represented by a ReLU net with hidden layer width d+1. This proves (8). In the case that f is Lipschitz, we use the following, a special case of Lemma 4.1 in [3].

Suppose f:[0,1]d→R is convex and Lipschitz with Lipschitz constant L. Then for every k≥1 there exist k affine maps Aj:[0,1]d→R such that

Combining this result with Theorem 2 proves (9). We turn to checking (5) and (10). We need the following observations, which seems to be well-known but not written down in the literature.

Let T>0 be sufficiently large that

We are essentially using width d to copy in the input variable, width 1 to compute each Aj and width 1 to store the output. ∎

Recall that positive continuous functions can be arbitrarily well-approximated by smooth functions and hence by ReLU nets with a single hidden layer (see e.g. Theorem 3.1 [11]). The relation (5) therefore follows from Lemma 6. Similarly, by Theorem 3.1 in [11], if f is smooth, then there exists K=K(d)>0 and a constant Cf depending only on the maximum value of the first K derivatives of f such that

where the infimum is over ReLU nets N with a single hidden layer of width n. Combining this with Lemma 6 proves (10).

It remains to prove (6) and (7). To do this, fix a positive continuous function f:[0,1]d→R+ with modulus of continuity ωf. Recall that the volume of the unit d-simplex is 1/d! and fix ε>0. Consider the partition

of [0,1]d into d!/ωf(ε)d copies of ωf(ε) times the standard d-simplex. Define fε to be a piecewise linear approximation to f obtained by setting fε equal to f on the vertices of the Pj’s and taking fε to be affine on their interiors. Since the diameter of each Pj is ωf(ε), we have

where gε,hε are convex, positive, and piecewise affine. Applying Theorem 2 completes the proof of (6) and (7). ∎