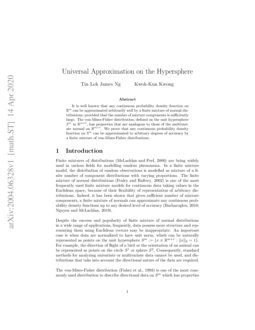 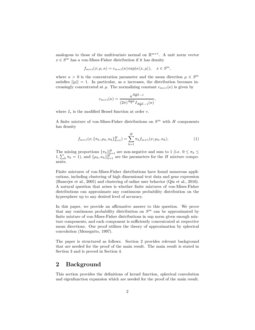 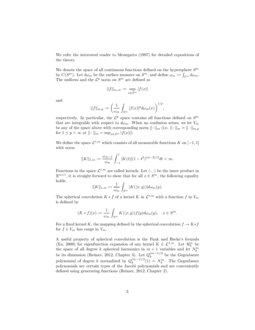 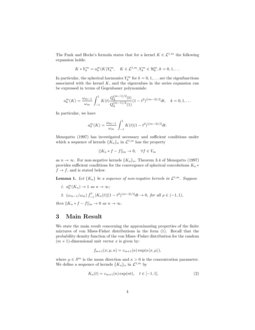 In this study, a numerical quadrature for the generalized inverse Gaussi...
Jaehyuk Choi, et al. ∙

Despite the success and popularity of finite mixture of normal distributions in a wide range of applications, frequently, data possess more structure and representing them using Euclidean vectors may be inappropriate. An important case is when data are normalized to have unit norm, which can be naturally represented as points on the unit hypersphere

Sm:={x∈Rm+1:||x||2=1}. For example, the direction of flight of a bird or the orientation of an animal can be represented as points on the circle S1 or sphere S2. Consequently, standard methods for analyzing univariate or multivariate data cannot be used, and distributions that take into account the directional nature of the data are required. The von-Mises-Fisher distribution (Fisher et al., 1993) is one of the most commonly used distribution to describe directional data on Sm which has properties analogous to those of the multivariate normal on Rm+1. A unit norm vector x∈Sm has a von-Mises-Fisher distribution if it has density

where κ>0 is the concentration parameter and the mean direction μ∈Sm satisfies ||μ||=1. In particular, as κ increases, the distribution becomes increasingly concentrated at μ. The normalizing constant cm+1(κ) is given by

where Iv is the modified Bessel function at order v. A finite mixture of von-Mises-Fisher distributions on Sm with H components has density

The mixing proportions {πh}Hh=1 are non-negative and sum to 1 (i.e. 0≤πh≤1,∑hπh=1), and {μh,κh}Hh=1 are the parameters for the H mixture components. Finite mixtures of von-Mises-Fisher distributions have found numerous applications, including clustering of high dimensional text data and gene expression (Banerjee et al., 2005) and clustering of online user behavior (Qin et al., 2016)

. A natural question that arises is whether finite mixtures of von-Mises-Fisher distributions can approximate any continuous probability distribution on the hypersphere up to any desired level of accuracy.

In this paper, we provide an affirmative answer to this question. We prove that any continuous probability distribution on Sm can be approximated by finite mixture of von-Mises-Fisher distributions in sup norm given enough mixture components, and each component is sufficiently concentrated at respective mean directions. Our proof utilizes the theory of approximation by spherical convolution (Menegatto, 1997). The paper is structured as follows. Section 2 provides relevant background that are needed for the proof of the main result. The main result is stated in Section 3 and is proved in Section 4.

This section provides the definitions of kernel function, spherical convolution and eigenfunction expansion which are needed for the proof of the main result. We refer the interested reader to

Menegatto (1997) for detailed expositions of the theory. We denote the space of all continuous functions defined on the hypersphere Sm by C(Sm). Let dωm be the surface measure on Sm, and define ωm:=∫Smdωm. The uniform and the Lp norm on Sm are defined as

respectively. In particular, the Lp space contains all functions defined on Sm that are integrable with respect to dωm. When no confusion arises, we let Vm be any of the space above with corresponding norm ||⋅||m (i.e. ||⋅||m=||⋅||m,p for 1≤p<∞ or ||⋅||m=supx∈Sm|f(x)|). We define the space L1,m which consists of all measurable functions K on [−1,1] with norm

Functions in the space L1,m are called kernels. Let ⟨⋅,⋅⟩ be the inner product in Rm+1, it is straight forward to show that for all x∈Sm, the following equality holds:

The spherical convolution K∗f of a kernel K in L1,m with a function f in Vm is defined by

For a fixed kernel K, the mapping defined by the spherical convolution f→K∗f for f∈Vm has range in Vm. A useful property of spherical convolution is the Funk and Hecke’s formula (Xu, 2000) for eigenfunction expansion of any kernel K∈L1,m. Let Hmk be the space of all degree k spherical harmonics in m+1 variables and let Nmk be its dimension (Reimer, 2012, Chapter 3). Let Q(m−1)/2k be the Gegenbauer polynomial of degree k normalized by Q(m−1)/2k(1)=Nmk. The Gegenbauer polynomials are certain types of the Jacobi polynomials and are conveniently defined using generating functions (Reimer, 2012, Chapter 2). The Funk and Hecke’s formula states that for a kernel K∈L1,m the following expansion holds:

In particular, the spherical harmonics Ymk for k=0,1,… are the eigenfunctions associated with the kernel K

, and the eigenvalues in the series expansion can be expressed in terms of Gegenbauer polynomials:

Menegatto (1997) has investigated necessary and sufficient conditions under which a sequence of kernels {Kn}n in L1,m has the property

as n→∞. For non-negative kernels {Kn}n, Theorem 3.4 of Menegatto (1997) provides sufficient conditions for the convergence of spherical convolutions Kn∗f→f, and is stated below.

Let {Kn} be a sequence of non-negative kernels in L1,m. Suppose

We state the main result concerning the approximating properties of the finite mixtures of von Mises-Fisher distributions in the form (1). Recall that the probability density function of the von Mises–Fisher distribution for the random (m+1)-dimensional unit vector x is given by:

where μ∈Sm is the mean direction and κ>0 is the concentration parameter. We define a sequence of kernels {Kn}n in L1,m by

In particular, for any fixed y∈Sm,

is the density function of the von Mises-Fisher distribution with mean direction y and concentration parameter n. For a fixed y∈Sm, Kn(⟨⋅,y⟩) plays the role of a “bump function” and becomes increasingly concentrated on y as n increases. We show that for any continuous probability density functions f on Sm, we can construct a mixture of von Mises-Fisher distributions where each mixture component has the form Kn(⟨⋅,yk⟩) and f can be approximated up to desired level of accuracy under the uniform norm.

In this section we first state and prove a few lemmas needed for the proof of Theorem 1. Recall that Vm is the space of integrable functions on Sm with respect to either the Lp norm or the uniform norm ||⋅||m. We first show that for any function f∈Vm the spherical convolution Kn∗f converges to f in ||⋅||m norm.

It is sufficient to verify conditions 1 and 2 in Lemma 1. For condition 1, since for non-negative kernel K and for any fixed x∈Sm,

The last equality equals to 1 if K is a probability density function. For condition 2, we note that for any fixed x∈Sm,

where the second equality is a result of applying a change of variable. Since en⟨x,y⟩≤enρ if ⟨x,y⟩<ρ, the numerator above is bounded above by

To lower bound the denominator, we define the ball Bδ(x):={y∈Sm:⟨x,y⟩≥1−δ} where 1−δ>ρ. Consequently,

Therefore, combining the two inequalities (3) and (4), we have

The following lemma concerning uniform approximation on Sm by Riemann sums is useful.

Let g(x,y):Sm×Sm→R be a continuous function. Then for any δ>0, there is a partition {U1,⋯,UN} of Sm such that the integral ∫Smg(x,y)dωm(y) can be uniformly approximated on Sm by Riemann sums:

for any yk∈Uk, where each Uk is connected.

For each x′∈Sm, there exists a neighborhood Ux′ such that for x∈Ux′, we have

There exists a partition {U1,⋯,UN′} of Sm by standard spherical coordinates blocks such that ∫Smg(x′,y)dωm(y) can be approximated uniformly by Riemann sums:

Since {Ux′}x′∈Sm covers Sm, there exists a finite subcover {Ux1,⋯,Uxn}. We can then find a common refinement of all the partitions used in the Riemann sums for ∫Smg(xi,y)dωm(y), i=1,⋯,n. The claimed result follows immediately. ∎

The following result shows that any continuous function on Sm can be uniformly approximated by linear combinations of {Kn(⟨⋅,yk⟩)}k for y1,y2,… in Sm.

Let f be a non-zero continuous function on Sm, then given δ>0, there exists integers n and N,y1,y2,…yN in Sm,c1,…,cN in R such that

By Lemma 2, there exists an integer n such that

On the other hand, by Lemma 3, there exists a partition {U1,⋯,UN} by connected sets of Sm such that for any x∈Sm and yk∈Uk,

It remains to carefully pick the points yk∈Uk to ensure that ∑Nk=1ck=1 in (7). This follows by applying the integral mean value theorem to each of the integrals

with connected Uk, and the fact that