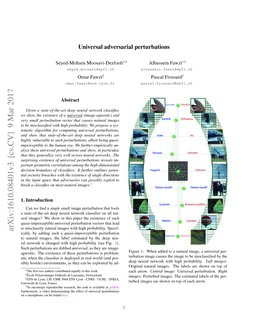 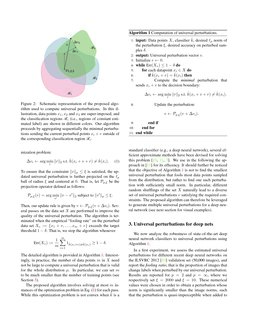 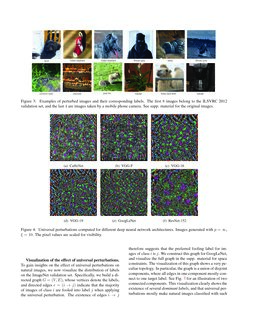 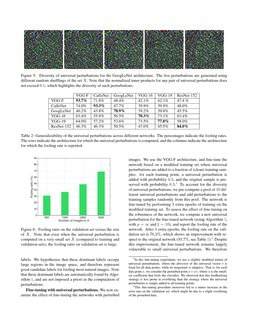 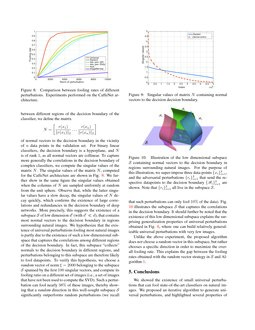 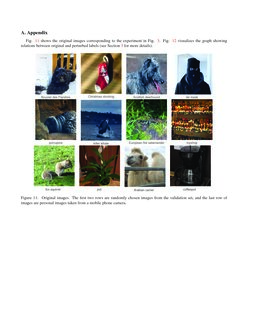 Deep networks have recently been shown to be vulnerable to universal per...
Seyed-Mohsen Moosavi-Dezfooli, et al. ∙

Convolutional neural networks (CNN) have become one of the most popular ...
Jiazhu Dai, et al. ∙

A study of the effect of JPG compression on adversarial images

We study the problem of finding a universal (image-agnostic) perturbatio...
Thomas A. Hogan, et al. ∙

We study the problem of finding a universal (image-agnostic) perturbatio...
Thomas A. Hogan, et al. ∙

A plethora of attack methods have been proposed to generate adversarial ...
Chia-Hung Yuan, et al. ∙

We formalize in this section the notion of universal perturbations, and propose a method for estimating such perturbations. Let μ denote a distribution of images in Rd, and ^k define a classification function that outputs for each image x∈Rd an estimated label ^k(x). The main focus of this paper is to seek perturbation vectors v∈Rd that fool the classifier ^k on almost all datapoints sampled from μ. That is, we seek a vector v such that

We coin such a perturbation universal, as it represents a fixed image-agnostic perturbation that causes label change for most images sampled from the data distribution μ. We focus here on the case where the distribution μ represents the set of natural images, hence containing a huge amount of variability. In that context, we examine the existence of small universal perturbations (in terms of the ℓp norm with p∈[1,∞)) that misclassify most images. The goal is therefore to find v that satisfies the following two constraints:

The parameter ξ controls the magnitude of the perturbation vector v, and δ quantifies the desired fooling rate for all images sampled from the distribution μ.

To ensure that the constraint ∥v∥p≤ξ is satisfied, the updated universal perturbation is further projected on the ℓp ball of radius ξ and centered at 0. That is, let Pp,ξ be the projection operator defined as follows:

Then, our update rule is given by v←Pp,ξ(v+Δvi). Several passes on the data set X are performed to improve the quality of the universal perturbation. The algorithm is terminated when the empirical “fooling rate” on the perturbed data set Xv:={x1+v,…,xm+v} exceeds the target threshold 1−δ. That is, we stop the algorithm whenever

The detailed algorithm is provided in Algorithm 1. Interestingly, in practice, the number of data points m in X need not be large to compute a universal perturbation that is valid for the whole distribution μ. In particular, we can set m to be much smaller than the number of training points (see Section 3).

The proposed algorithm involves solving at most m instances of the optimization problem in Eq. (1) for each pass. While this optimization problem is not convex when ^k is a standard classifier (e.g., a deep neural network), several efficient approximate methods have been devised for solving this problem [19, 11, 7]. We use in the following the approach in [11] for its efficency. It should further be noticed that the objective of Algorithm 1 is not to find the smallest universal perturbation that fools most data points sampled from the distribution, but rather to find one such perturbation with sufficiently small norm. In particular, different random shufflings of the set X naturally lead to a diverse set of universal perturbations v satisfying the required constraints. The proposed algorithm can therefore be leveraged to generate multiple universal perturbations for a deep neural network (see next section for visual examples).

While the above universal perturbations are computed for a set X of 10,000 images from the training set (i.e., in average 10 images per class), we now examine the influence of the size of X on the quality of the universal perturbation. We show in Fig. 6 the fooling rates obtained on the validation set for different sizes of X for GoogLeNet. Note for example that with a set X containing only 500 images, we can fool more than 30%

of the images on the validation set. This result is significant when compared to the number of classes in ImageNet (

1000), as it shows that we can fool a large set of unseen images, even when using a set X containing less than one image per class! The universal perturbations computed using Algorithm 1 have therefore a remarkable generalization power over unseen data points, and can be computed on a very small set of training images.

Visualization of the effect of universal perturbations. To gain insights on the effect of universal perturbations on natural images, we now visualize the distribution of labels on the ImageNet validation set. Specifically, we build a directed graph G=(V,E), whose vertices denote the labels, and directed edges e=(i→j) indicate that the majority of images of class i are fooled into label j when applying the universal perturbation. The existence of edges i→j therefore suggests that the preferred fooling label for images of class i is j. We construct this graph for GoogLeNet, and visualize the full graph in the supp. material for space constraints. The visualization of this graph shows a very peculiar topology. In particular, the graph is a union of disjoint components, where all edges in one component mostly connect to one target label. See Fig. 7 for an illustration of two connected components. This visualization clearly shows the existence of several dominant labels, and that universal perturbations mostly make natural images classified with such labels. We hypothesize that these dominant labels occupy large regions in the image space, and therefore represent good candidate labels for fooling most natural images. Note that these dominant labels are automatically found by Algorithm 1, and are not imposed a priori in the computation of perturbations.

extra epochs of training on the modified training set. To assess the effect of fine-tuning on the robustness of the network, we compute a new universal perturbation for the fine-tuned network (using Algorithm

1, with p=∞ and ξ=10), and report the fooling rate of the network. After 5 extra epochs, the fooling rate on the validation set is 76.2%, which shows an improvement with respect to the original network (93.7%, see Table 1).444This fine-tuning procedure moreover led to a minor increase in the error rate on the validation set, which might be due to a slight overfitting of the perturbed data. Despite this improvement, the fine-tuned network remains largely vulnerable to small universal perturbations. We therefore repeated the above procedure (i.e., computation of a pool of 10 universal perturbations for the fine-tuned network, fine-tuning of the new network based on the modified training set for 5 extra epochs), and we obtained a new fooling ratio of 80.0%. In general, the repetition of this procedure for a fixed number of times did not yield any improvement over the 76.2% fooling ratio obtained after one step of fine-tuning. Hence, while fine-tuning the network leads to a mild improvement in the robustness, we observed that this simple solution does not fully immune against small universal perturbations.

4 Explaining the vulnerability to universal perturbations

). For each perturbation, we depict a phase transition graph in Fig.

8 showing the fooling rate on the validation set with respect to the ℓ2 norm of the perturbation. Different perturbation norms are achieved by scaling accordingly each perturbation with a multiplicative factor to have the target norm. Note that the universal perturbation is computed for ξ=2000, and also scaled accordingly.

data points in the validation set. For binary linear classifiers, the decision boundary is a hyperplane, and

, as all normal vectors are collinear. To capture more generally the correlations in the decision boundary of complex classifiers, we compute the singular values of the matrix

Unlike the above experiment, the proposed algorithm does not choose a random vector in this subspace, but rather chooses a specific direction in order to maximize the overall fooling rate. This explains the gap between the fooling rates obtained with the random vector strategy in S and Algorithm 1.

We gratefully acknowledge the support of NVIDIA Corporation with the donation of the Tesla K40 GPU used for this research.