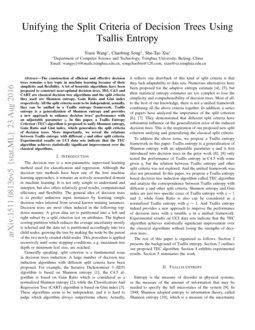 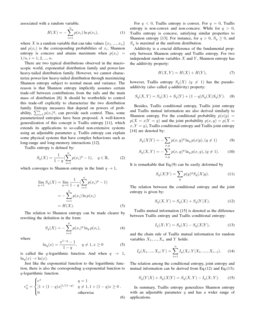 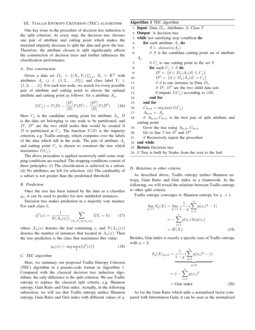 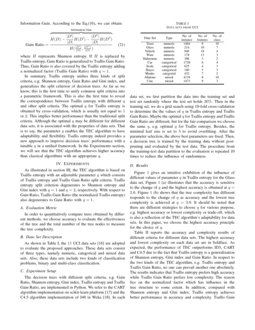 On the Optimality of Trees Generated by ID3

Since its inception in the 1980s, ID3 has become one of the most success...
Alon Brutzkus, et al. ∙

The decision tree is a non-parametric supervised learning method used for classification and regression. Although the decision tree methods have been one of the first machine learning approaches, it remains an actively researched domain in machine learning. It is not only simple to understand and interpret, but also offers relatively good results, computational efficiency and flexibility. The general idea of decision trees is to predict unknown input instances by learning simple decision rules inferred from several known training instances. Decision trees are most often induced in the following top-down manner. A given data set is partitioned into a left and right subset by a split criterion test on attributes. The highest scoring partition which reduces the average uncertainty mostly is selected and the data set is partitioned accordingly into two child nodes, growing the tree by making the node be the parent of the two newly created child nodes. This procedure is applied recursively until some stopping conditions, e.g. maximum tree depth or minimum leaf size, are reached.

Generally speaking, split criterion is a fundamental issue in decision trees induction. A large number of decision tree induction algorithms with different split criteria have been proposed. For example, the Iterative Dichotomiser 3 (ID3) algorithm is based on Shannon entropy

. These algorithms seem to be independent, and it is hard to judge which algorithm always outperforms others. Actually, it reflects one drawback of this kind of split criteria is that they lack adaptability to data sets. Numerous alternatives have been proposed for the adaptive entropy estimate

[4, 5], but their statistical entropy estimates are too complex to lose the simplicity and comprehensibility of decision trees. Most of all, to the best of our knowledge, there is not a unified framework combining all the above criteria together. In addition, a series of papers have analyzed the importance of the split criterion [6, 7]. They demonstrated that different split criteria have substantial influence on the generalization error of the induced decision trees. This is the inspiration of our proposed new split criterion unifying and generalizing the classical split criteria.

The rest of this paper is organized as follows. Section 2 presents the background of Tsallis entropy. Section 3 outlines our proposed TEC algorithm. Section 4 exhibits experimental results. Section 5 summaries the work.

, which is a measure of the uncertainty associated with a random variable.

is the corresponding probabilities of

[8]. It should be worthwhile to control this trade-off explicitly to characterize the two distribution family. Entropy measures that depend on powers of probability, ∑ni=1p(xi)q, can provide such control. Thus, some parameterized entropies have been proposed. A well-known generalization of this concept is Tsallis entropy [11], which extends its applications to so-called non-extensive systems using an adjustable parameter q. Tsallis entropy can explain some physical systems that have complex behaviours such as long-range and long-memory interactions [12].

Tsallis entropy is defined by:

which converges to Shannon entropy in the limit q→1,

The relation to Shannon entropy can be made clearer by rewriting the definition in the form:

is maximal at the uniform distribution.

Additivity is a crucial difference of the fundamental property between Shannon entropy and Tsallis entropy. For two independent random variables X and Y, Shannon entropy has the additivity property:

It is remarkable that Eq.(9) can be easily deformed by

The relation between the conditional entropy and the joint entropy is given by:

Tsallis mutual information [15] is denoted as the difference between Tsallis entropy and Tsallis conditional entropy:

and the chain rule of Tsallis mutual information for random variables

The relation among the conditional entropy, joint entropy and mutual information can be derived from Eq.(12) and Eq.(13):

In summary, Tsallis entropy generalizes Shannon entropy with an adjustable parameter q and has a wider range of applications.

One key issue in the procedure of decision tree induction is the split criterion. At every step, the decision tree chooses one pair of attribute and cutting point which makes the maximal impurity decrease to split the data and grow the tree. Therefore, the attribute chosen to split significantly affects the construction of decision trees and further influences the classification performance.

Here Cj is the candidate cutting point for attribute Aj, D is the data set belonging to one node to be partitioned, and D′, D′′ are the two child nodes that would be created if D is partitioned at Cj. The function T(D) is the impurity criterion, e.g. Tsallis entropy, which computes over the labels of the data which fall in the node. The pair of attribute Aj and cutting point Cj is chosen to construct the tree which maximizes I(Cj).

The above procedure is applied recursively until some stopping conditions are reached. The stopping conditions consist of three principles: (i) The classification is achieved in a subset. (ii) No attributes are left for selection. (iii) The cardinality of a subset is not greater than the predefined threshold.

gn, it can be used to predict for new unlabeled instances.

Decision tree makes prediction in a majority vote manner. For each class k,

where An(x) denotes the leaf containing x, and N(An(x)) denotes the number of instances that located in An(x). Then the tree prediction is the class that maximizes this value:

Here, we summary our proposed Tsallis Entropy Criterion (TEC) algorithm in a pseudo-code format in Algorithm 1. Compared with the classical decision tree induction algorithms, the only difference is the split criterion. We use Tsallis entropy to replace the classical split criteria, e.g. Shannon entropy, Gain Ratio and Gini index. Actually, in the following subsection, we will see that Tsallis entropy unifies Shannon entropy, Gain Ratio and Gini index with different values of q.

Iii-D Relations to other criteria

As described above, Tsallis entropy unifies Shannon entropy, Gain Ratio and Gini index in a framework. In the following, we will reveal the relations between Tsallis entropy to other split criteria.

Besides, Gini index is exactly a specific case of Tsallis entropy with q=2:

In summary, Tsallis entropy unifies three kinds of split criteria, e.g. Shannon entropy, Gain Ratio and Gini index, and generalizes the split criterion of decision trees. As far as we know, this is the first time to unify common split criteria into a parametric framework. This is also the first time to reveal the correspondence between Tsallis entropy with different q and other split criteria. The optimal q for Tsallis entropy is obtained by cross-validation, which is usually not equal to 1 or 2. This implies better performance than the traditional split criteria. Although the optimal q may be different for different data sets, it is associated with the properties of data sets. That is to say, the parameter q enables the TEC algorithm to have adaptability and flexibility. Tsallis entropy indeed provides a new approach to improve decision trees’ performance with a tunable q in a unified framework. In the Experiments section, we will see that the TEC algorithm achieves higher accuracy than classical algorithms with an appropriate q.

In order to quantitatively compare trees obtained by different methods, we choose accuracy to evaluate the effectiveness of the tree and the total number of the tree nodes to measure the tree complexity.

As shown in Table I, the 11 UCI data sets [16] are adopted to evaluate the proposed approaches. These data sets consist of three types, namely numeric, categorical and mixed data sets. Also, these data sets include two kinds of classification problems, binary and multi-class classification.

The decision trees with different split criteria, e.g. Gain Ratio, Shannon entropy, Gini index, Tsallis entropy and Tsallis Gain Ratio, are implemented in Python. We refer to the CART algorithm implementation on scikit-learn platform [17] and the C4.5 algorithm implementation of J48 in Weka [18]. In each data set, we first partition the data into the training set and test set randomly where the test set holds 30%. Then in the training set, we do a grid search using 10-fold cross-validation to determine the the values of q in Tsallis entropy and Tsallis Gain Ratio. Maybe the optimal q for Tsallis entropy and Tsallis Gain Ratio are different, but for the fair comparison we choose the same q, e.g. optimal q for Tsallis entropy. Besides, the minimal leaf size is set to 5 to avoid overfitting. After the parameter selection, the above best parameters are fixed. Then, a decision tree is trained by the training data without post-pruning and evaluated by the test data. The procedure from the training-test data partition to the evaluation is repeated 10 times to reduce the influence of randomness.

Figure 1 gives an intuitive exhibition of the influence of different values of parameter q in Tsallis entropy for the Glass data set. Figure 1 (a) illustrates that the accuracy is sensitive to the change of q and the highest accuracy is obtained at q=2.6. Figure 1 (b) shows that the tree complexity has different responds to the change of q as accuracy and the lowest tree complexity is achieved at q=3.9. It should be noted that there are different strategies to choose q for various purpose, e.g. highest accuracy or lowest complexity or trade-off, which is also a reflection of the TEC algorithm’s adaptability for data sets. In this paper, we choose the highest accuracy principle for the choice of q.

0.01. The results show that the TEC algorithm with appropriate q achieves a average 4% statistically significant improvement in accuracy and maintains a lower complexity.

In terms of optimal value of q, we find a fuzzy trend from Table II that the more of class number, the smaller q value is tended, e.g. for numeric type data sets from Yeast to Haberman, q is increasing while the class number is decreasing (exception for Vehicle). In this paper, we choose the optimal value of q using cross-validation method, but we conjecture that the values of q is associated with the properties of data sets. For example, the Car data set, all the algorithms presents almost the same results which reflects the data set is not sensitive to the parameter q. The relation between the q and the properties of data sets will be discussed in the future work.

In this paper, we present and evaluate Tsallis entropy for enhancing decision trees in a fundamental issue, e.g. split criterion. We unify the classical split criteria into a parametric framework and propose the TEC algorithm with Tsallis entropy split criterion which generalizes Shannon entropy, Gain Ratio and Gini index through an adjustable parameter q. Most of all, we reveal the relations between Tsallis entropy with different q and other split criteria. Experimental results indicate that, with appropriate q, the TEC algorithm achieves a average 4% statistically significant improvement in accuracy. Nevertheless, the approaches have limitations that need to be addressed in the future, such as, the estimate method for parameter q

in place of current cross-validation method. Furthermore, Tsallis entropy also has potential applications beyond decision trees, for instance, Random Forest and Bayesian network, to be investigated in future work.